Who used a portable transistor radio, know how, over time, decrease the sensitivity and loudness of the radio, begins to “float” the rate of advance of the tape in the music player…
The main reason for such unfortunate failures of technology are the reduction of the supply voltage for the consumption of the galvanic elements of its active mass. Disappointing and a source of domestic lighting network — voltage it is often rides.
It is clear that for the normal operation of electronic devices needed something capable of holding the supply voltage at the desired level. And how can you not remember the mythical Atlanta, holding on his shoulders the vault of heaven!
Meanwhile, something has already been implemented in a special group semiconductor reference diodes, or Zener diodes. A schematic representation of the miracle of modern electronics devices looks like a normal diode, resting its anode to the cathode. Next to the letters VD and the order of circuit number. Well, some idea about “atlantska” behavior of the diodes can be derived from volt-ampere characteristics of any of them.
If using this device to pass current in the forward direction, the voltage drop across the Zener diode increases gradually, not exceeding one volt. However, when you change the polarity a slight increase of the initial reverse current Iobr meets the fast rise of reverse voltage Uобр. With the attainment of some level of growth in the second parameter is terminated. And this despite the further increase of the reverse current! 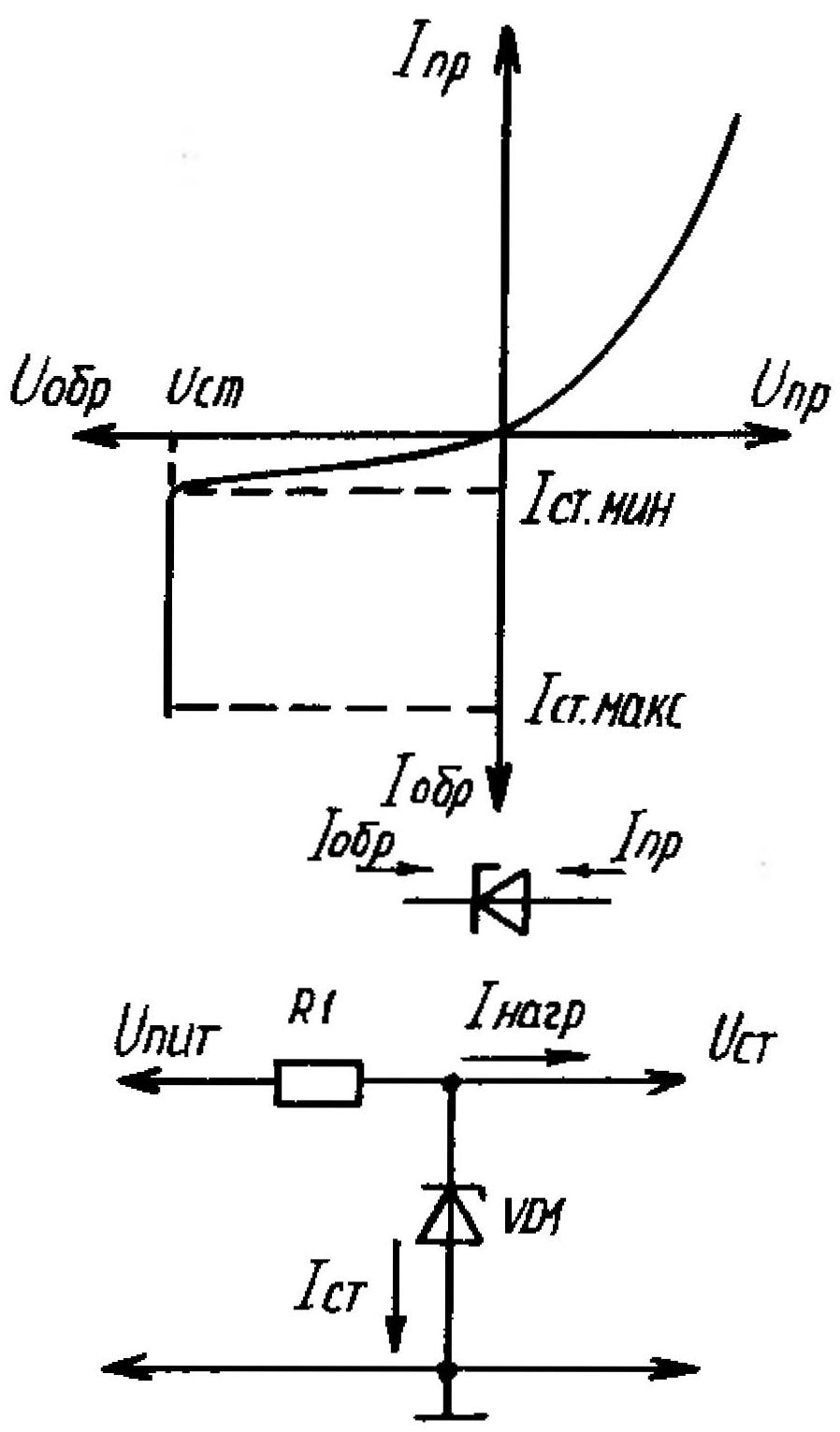 A schematic representation of a Zener diode, its volt-ampere characteristic and an example of incorporation into electronic devices

Electrical schematic and layout for a homemade mounting block “rectifier-stabilizer” for music player
The point of fracture characteristics correspond to the voltage stabilization of Ist and the minimum current stabilization ICT min. and There is another special feature: ICT max’ limited heating of the device is several times larger than the initial value.
Produces a wide range of Zener diodes. Often there are maximum and current (up to 1.4 A) and voltage (180 V), which gives a freedom of maneuver in the choice of device for particular scheme.
So, in a typical voltage regulator reference diode VD5 is paired with R1, forming a divider, where Uct consistently, and the voltage drop across the resistor corresponds to a change in U Pete and dot through R1. The latter is the sum of ICT and Nagr.
Condition good voltage regulation at the load for such a scheme: to U Pete was in two and more times higher than the UCT, ICT — commensurate with Nagr. Obviously, this is the simplest voltage regulator is very inefficient energy source, and therefore suitable only for digital circuits, the current consumption of which does not exceed fractions of a milliampere.
To maintain the specified voltage at the load with a current of several tens and even hundreds of milliamperes, the Zener diode helps low-power amplifier for power transistor. And since this solution is widely used in the homemade power supply, it is useful to pay attention to his full scheme (for example, as regards food, the music player). Reduced to 6.3 V AC the voltage supplied to the input of the block “rectifier-stabilizer”, can be removed from the filament winding of the power transformer (not illustrated) from an old tube radio. Much smaller size will succeed with transformer ТП121-17.
AC voltage in any embodiment of the stabilizer Assembly rectifies diode VD1 —VD4. Smooths out the ripple capacitive filter (C1). The Zener diode VD5 maintains a constant voltage on the basis of the “power” transistor VT1; a current flowing through the resistor R1 provides the power base and the necessary current stabilization.
For the realization of the possibilities inherent in the scheme design it is possible to use the oxide capacitor type K50-35 and the resistor is 0.5. The transistor is supplied with a radiator in the form of an aluminum plate having a thickness of 2 mm; its dimensions are chosen empirically according to the amounts of load and input voltage. Such a radiator during the operation warm but not hot.
The mounting plate is manufactured of plastic, covered on one side with copper foil. Configuration pseudopath conductors is obtained by cutting the conductive layer in the isolation groove of the appropriate shape. Wiring of the electronic components is carried out in strict accordance with the sketch shown from the foil, with a preliminary introduction of their findings into the holes indicated by bold dots.
The properties of the Zener diode allow it to be used as guards, protecting the radio from damage by abnormal high voltage pulse, followed by a corresponding inrush current. An example of such an application of the Zener diode can serve as an amplifier of the speech signal received by the telephone handset with a carbon microphone.

Diagram of the amplifiers of the speech signal with a length of telephone with a carbon microphone and its circuit Board with soldering of the electronic components, conventionally depicted from pseudopath conductors 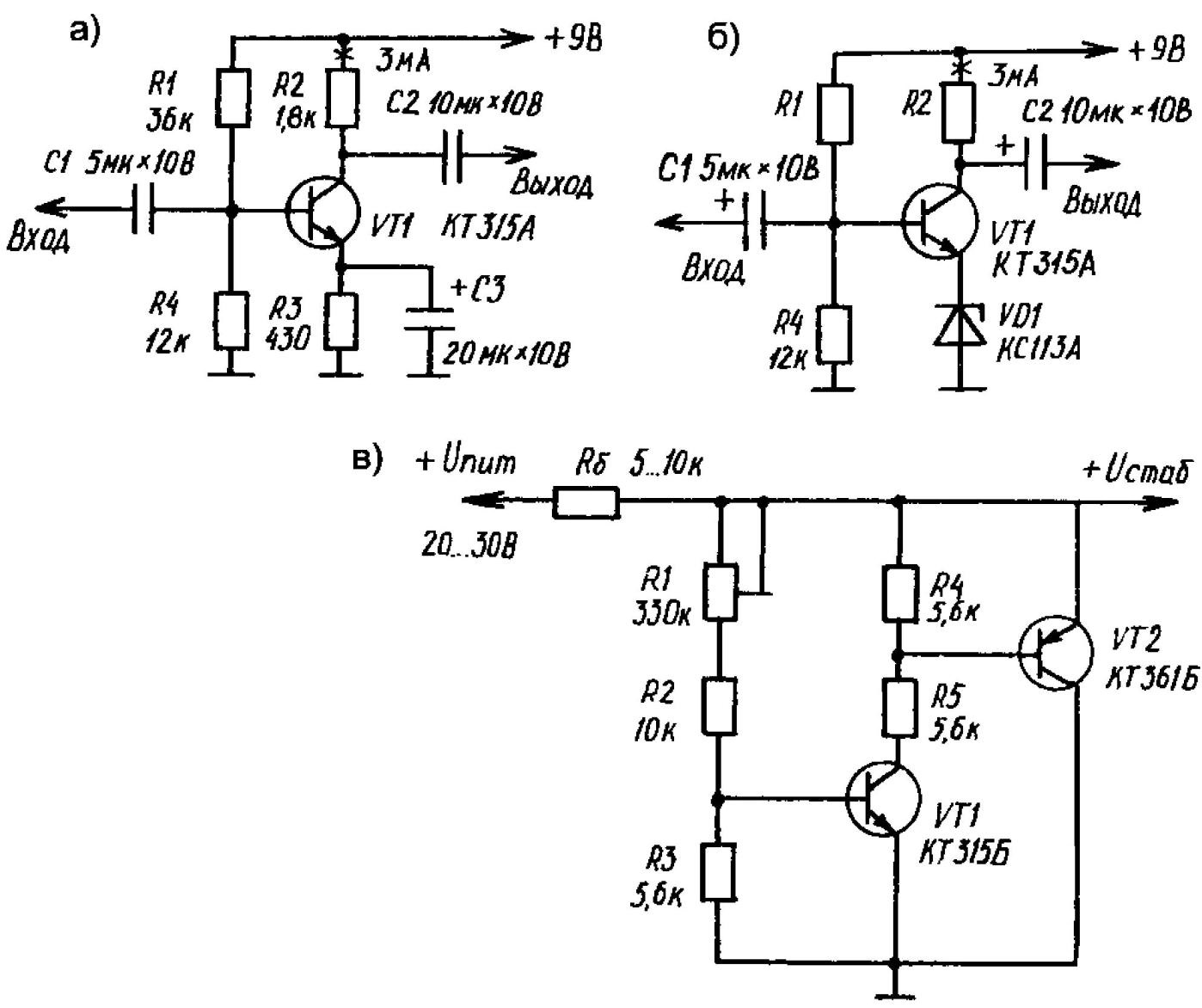 Typical wiring diagram of the emitter of the stabilizing transistor of the cascade (a), the replacement of RC elements in it with a Zener diode (b), as well as custom welcome build the adjustable analog (V) two semiconductor triodes, allowing you to install a variable resistor Ist within 3— 20 In in ICT of the order of 5 mA
Here L1 and L2 are the winding “conversational” transformer phone and a node in the frame — a homemade amplifier built into this unit. The device operates so that during a conversation on the transition collector-emitter voltage of transistor VT1 is formed a 1.5-volt voltage drop. But in parallel connected VD1 (UCT = 6.8 V) current is virtually absent — as if no Zener at all.
But when the tube is removed by mistake during high voltage AC signal of the call, then the microphone ВМ1, the transistor VT1, the capacitors C1 and C2 are bombarded by powerful electrical “jolt”. Here comes into effect the diode VD1, limiting the voltage to a safe level UCT (if the polarity of the threat of the pulse coincides with the polarity of “conversational” voltage).
The reverse polarity pulse to Zener diode a direct current creates a voltage drop to 0.7 V. This (reverse for these radioelements) voltage is considered to be quite safe. For normal operation of the machine is set to offer a degree of opening of the selection transistor of the resistor R1.
Wishing to complete such amplifier your phone can make yourself pseudospectral cost and to make the installation. Recommended radio: resistor MLT-0,125, condensers K50-6 or more miniature — Japanese or South Korean.
The range of tasks performed by the Zener diodes is not limited. We know, for example, about the possibility of the fulfillment of their duties… of the oxide of the capacitor.
Remember: for the stabilization mode transistor DC current in the emitter circuit typically includes a resistor R. the Input of this ohmic resistance raises in this example, the voltage at the emitter to 1.3 V.
For normal operation of the amplifier, this resistor is shunted by a capacitor C3. Due to the significant capacity (and hence very small reactive impedance to currents of audio frequency) there is a bifurcation passing through the transistor ripple current. The DC component, the current through R3 creates a need for autostabilisation the offset on the emitter. The variable (an audible) part of almost shorted to ground low capacitive resistance of the capacitor C3 and does not affect the offset.
When enabled, instead of the elements R3 and C3 VD1 stabilitron with tension of stabilization 1.3 it is clear that the cascade DC does not change; the variable component, affecting the amount of current stabilization does not affect the amount of displacement of the emitter. This means that the Zener diode is quite capable of replacing a resistor with a capacitor, the consequence could be a reduction of area of the Board and the number of rations for her.
But what if a hobbyist is no high voltage Zener diode? In this case, sequentially connect several low-voltage its analogues, provided that the sum of their voltages is equal to the required stabilization.
And again. When there is no Zener diode can be replaced by two transistors. According to the developers site, this substitution allows to set a variable resistor R1, the voltage stabilization in the range of 3 to 20 V At a current stabilization of the order of 5 mA.
Yuri GRIGORIEV