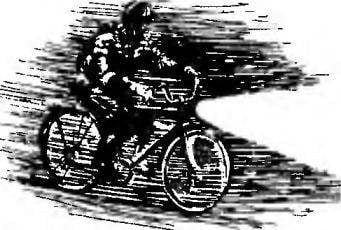 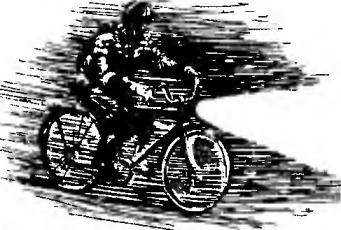 Industries is not only “pedal” means of transportation and sports equipment to strengthen leg muscles. In the right hands it is easily converted into a variety of small-scale mechanization, as “modelist-Konstruktor” has repeatedly been told on its pages (№ 11’81, 3’85, 2’87, 7’96). And therefore development, are addressed to cyclists — and fans of night riding with brightly burning (alternator) spotlight, may be useful to other readers.

The essence of the proposed technical solution is that in the scheme of electrical equipment is introduced a diode limiter with a simultaneous replacement of filament lamps designed for a smaller operating voltage. As a result, the spotlight will Shine brighter and smoother. And even with a sharp decrease in speed of rotation of the armature of Wellenreiter (a similar situation is not uncommon, for example, when driving on a bad road in the dark, when inevitably you have to “reset speed”) of light does not disappear.
Virtually eliminated perekal lamp. After all, the guarantors of the longevity here, semiconductor diodes, each of which the passage of current in the “forward” direction voltage drops of about 1 V. since the current produced by BeloVenesolana, variable, delimiter there are two oriented differently garland diodes.

Six months of intensive use of the bike with upgraded equipment confirmed its high reliability and potential of the considered technical solutions. The headlight light is bright enough during the day. Even when I go step, and the bike (included with generator) are nearby.
S. AGEEV,
Dniprodzerzhynsk,
The Dnepropetrovsk region.