Primitive “control print” — electroputere with two wires and the lamp — not the best device for “continuity” of electric circuits. Commercially available testers and isometry is also called a gift, especially when you have to deal with modern technology, and they are not cheap. So we have electricians to create probes-indicators — versatile, compact and reliable. On one of these devices tell the magazine “modelist-Konstruktor” No. 5 for the year 1990.
Make yourself this probe, developed, by the way, a talented representative of the rural hinterland, at first, could not get enough. The device is really a reliable helper rigger, allowing not only to check the electrical circuit, but separate, elements — diodes, transistors, capacitors, resistors. Assembled in the housing of the toy gun and equipped with styli, it also makes it possible to control AC and DC voltage from 1 to 400 V, to detect the phase and zero wire of a network, to assess the insulation resistance of electrical equipment.
However, over time there has been a discrepancy between the real capabilities of the probe indicator and the requirements, which makes such devices increasingly complex electroradiotechnics. In particular, ceased to hold the complexity of the detection voltage in DC circuits and finding out, is extinguished alarm led on the de-energized line wire or short circuit. Therefore, the device had to be upgraded. Changes are minimal (details НL2, NL3, R5 and section “a” on the circuit Board), but universal probe indicator is now again in business.
As before, the basis of the device — a DC amplifier transistors /T1/T2 load which is the led НL1. Resistors R1 and RZ I6 limit of semiconductor triodes. The capacitor C1 creates a chain of negative feedback for alternating current, eliminates false indication from external interference. The resistor R4 in the base circuit of VT2 is used to set the required limit of the measuring resistances. Resistor R2 limits the I unit during operation of the probe in AC and DC. The VD1 diode performs the function of a half-wave rectifier. LEDs НL2 and NL3 are indicators of polarity, which limits current flow through the resistor R5. 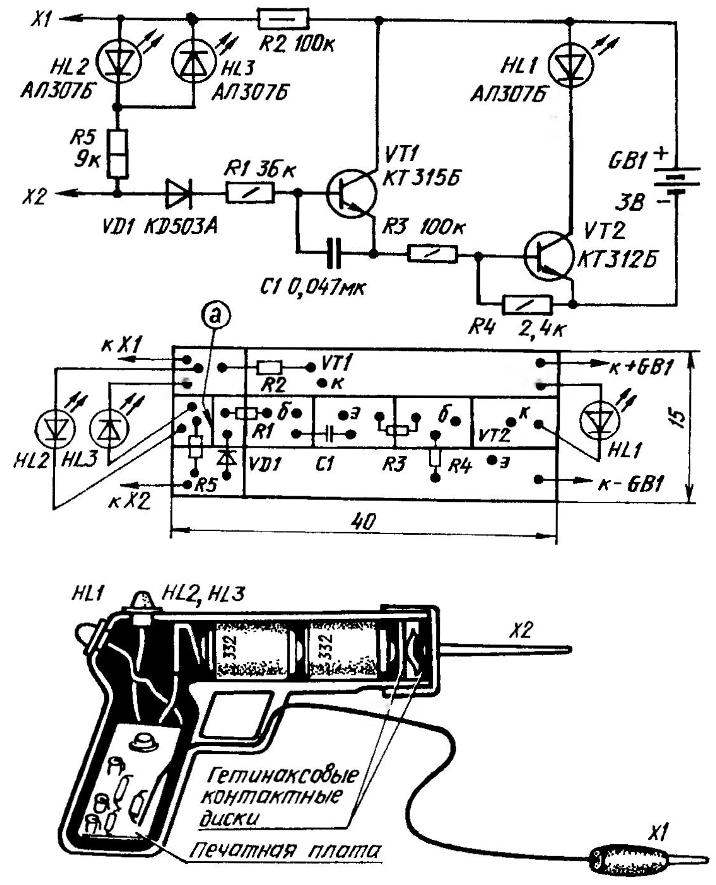 A circuit diagram of a topology circuit Board and layout of the upgraded probe
In the initial state, the transistors are closed, and the indicator is not lit НL1. But if the probes connect to each other or connected to de-energized serviceable chain having Rц not more than 500 ohms, then НL1 ignited. The brightness of its light is inversely proportional to the resistance in the test circuit.
When you connect the probe to the AC circuit of the positive half-open transistors, and the led lights up НL1. Glow and additional indicators НL2 and NL3 on the input of the device. If the voltage is constant, then НL1 and NL3 will be lit when the probe x2 will be a plus (with a different polarity of the voltage in the test circuit they will dim, but the led lights up НL2).
As with the product before the upgrade, the serviceability of the diodes and transistors checked by comparing the p-n transitions. The lack of illumination indicates an open, but if NEITHER is lit continuously, the test transition test.
When connected to the probe capacitor is serviceable HL1 led flashes and then goes off. Brightness and flash duration dependent on capacitance check. When the condenser is punched or has big leak, the light will be on constantly.
“Phase” is determined as follows: probe X1 take in hand, and probe x2 relate to the studied wires. If HL1 led is on, the phase, that is, there is.
Methods other checks have not changed, but the upgraded probe-indicator still easier and faster than before, because in the role of informants are three led indicators.
V. TURNER, g Sumy, Ukraine