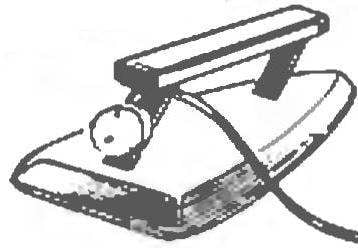 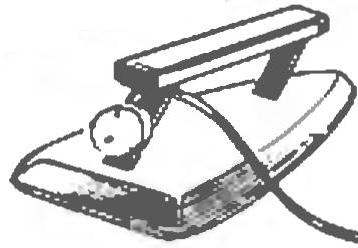 during the period covering the country’s public deficit even the most that neither is ordinary iron burst in a number of regions in the category of “trudnoreshaemyh”. And is — alas! — quite expensive. But for the resourceful craftsman to make the original iron, as they say, no problem. You only need to thoroughly want… unlike the hero of the once popular song where the words are in the title of this material, the success of saadeldin guaranteed.

The design of The proposed iron are simple (see illustration ) and to available for making at home anyone ever in your life dealt with nojoumi metal file and a drill
So, take the neighbors iron and laid it on a sheet of 3-5 mm of aluminum, draw a pencil or a Scriber along the contour Marking soles future iron ready. Saw a hacksaw or a jig saw, its contour, file down the edges, sakiroglu them. Then in the resulting workpiece drill 2 holes for rivets with head wpoty. A fifth of all cases, it is possible to tell, behind
In the queue — handle. Cut a strip from a sheet of aluminum or steel, 2 mm thick, file down the edges. And drilling it according to the drawing hole, curve, form the basis of the handle. And crafting from a block of wood and plywood top and bottom nakedki, connect them with screws. Ready rivet the handle to the sole plate. After processing the last sanding and then felt around with the paste to obtain a mirror surface, the rear handles attach with screws M4 with nuts pad, made of plug with remote current-carrying pins and drilled two holes with a diameter of 1 mm.
Now on stage — heat the electric heating element. Styling it should make a “dough” of water glass (or silicate office glue), talc (sand), chalk (tooth powder), or asbestos crumbs. This mixture should have a thick sour cream. and the Dough is” rolled smooth sing with a thickness of 2-5 mm on the pre-degreased with gasoline or acetone, the surface of the sole. Then stack the heater is a spiral of nichrome wire. For example, electric | stove, fireplace or iron.
If a spiral at hand was not, it turned out the same (avoid local overheating) the gaps sirimau 0.3—0.5 mm.

iron:
1 – the base or the sole of the iron sheet duralumin, 2 – base of handle (band of D16 or St3). 3 – electrical connector (plug), 4 – plug electric, 5 – string electric, 6 – pads wooden, 7 – Urup 3.5 mm(2 PCs) 8 – M4 screw with nut (2), 9 – the top layer of salazie, 10 – thermal elektronagrevatel, 11 – bottom layer of insulation, 12 – rivet with a diameter of 5mm (2pcs.).
To check the efficiency of manufactured spiral and adjust it for normal operation of the iron as follows. Putting a nichrome heater on an insulating and heat-resistant material (asbestos, dry woods), include in the network the Color of the spiral, soon to become dark red. If heating is weak, it is necessary to reduce the length of the winding (of course, after you disconnect from the network
Placing the finished spiral is applied an additional layer of “dough”. Spread it so as to give the iron a finished look. Then connect the power cord plug to the ends of the spiral, fixed in an insulating box (and the heater hoses to the latter is also covered with a layer of “dough”). The finished product allowed to dry for two days, after which a single probe avometr touch the soleplate, and the second companylogo pin plug ail Ki and measure the insulation resistance. It should be in the range of 480-520 com. The iron can safely be included in the network.
If you suddenly experience in the manufacture of iron difficulties with the acquisition of components for preparation of “dough”, it is possible for insulation to use ordinary clay. On a sole it is applied 7-mm thick, and a wooden stick, make a groove for the subsequent laying of a spiral. Then GPIO dried.
After drying of the first layer and the groove is placed a spiral. And on top of all once again covered with clay Again dried After drying the upper layer of the test insulation resistance and, if normal, proceed to exploitation of iron.
Using the iron, we should not neglect the measures of protection against electric shock porsenna. Try to keep when wet linen AO AREM Ironing water spray as little as possible got on the insulating layers. Don’t leave the iron unattended, strike it, and it will serve Because the heat here heater — closed: less oxidized and more reliable.
S. SEMENOV