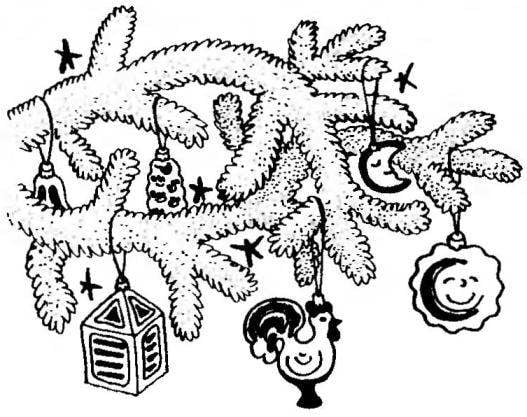 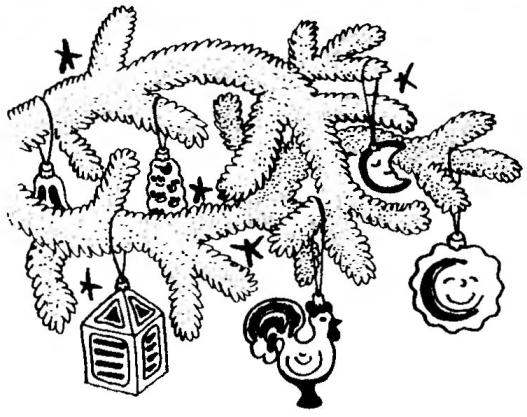 Among the variety of flashing Christmas lights increasingly popular get the “ultra simple”, consisting… only of the LEDs. Instead of the usual piles of circuit design (with electronic keys, which are intermittently open-closed low-frequency RC, RL or LC oscillators) here compact semiconductor light emitter. However, the LEDs acting as a kind of microswitches, not simple (Fig. 1A—1 b). The name of this class of optoelectronic devices, developed at the junction of integrated microelectronics and optics — Blinking LED lamps (flashing LEDs, or MSV).

The basis of the flashing led is open-frame CMOS oscillator A1 (Fig. 1B). He periodically opens and closes the electronic key A2. Located here led HL1, respectively, flashes with a frequency of 1.5— 2.5 Hz. And the design is such that MSV can be connected (through a built-in resistor R2) to DC voltage directly, without external-coorditates.
Strictly speaking, in this optoelectronic semiconductor device has a low ohmic resistor R1 with a value of 5-8 Ohms, but can be ignored when considering the General principle of operation. Typical characteristics of MSV such that during the change of power from 3.5 to 13 In direct current is in the range from 6 to 60 mA.
Diode VD1 has a protective function (in case the feed back voltage). Well, for a long period of flow through a large current (150-200 mA) threatened withdrawal of MSV failure.
As can be seen from the generalized functional diagram of the flashing led, it has its own chastitsami the capacitor C1 as the old devices with electronic keys. He only has a small capacity, because it is in the form of distributed integrated structures on a common substrate. Low generation frequency (2 Hz) due primarily to internal sverkhvysokie CMOS resisto-Rami. Inevitable in the production process spread causes you to meet two absolutely identical (frequency of generation) MSW — a rarity.
Flashing LEDs (Fig. 1A) is outwardly not much different from the typical АЛ307, well known to many radio Amateurs. Even to the naked eye in each of the electronic “newcomers” visible “chip” (in this case, the substrate with the integral elements), monolithic light guide of sverhrazdutaya plastic as well as cathode and anode.
On the schematic diagrams depicted MSV is the same as normal LEDs. The only graphical difference is that instead of the pair of solid arrows of the “light emitters” are plotted two dashed. 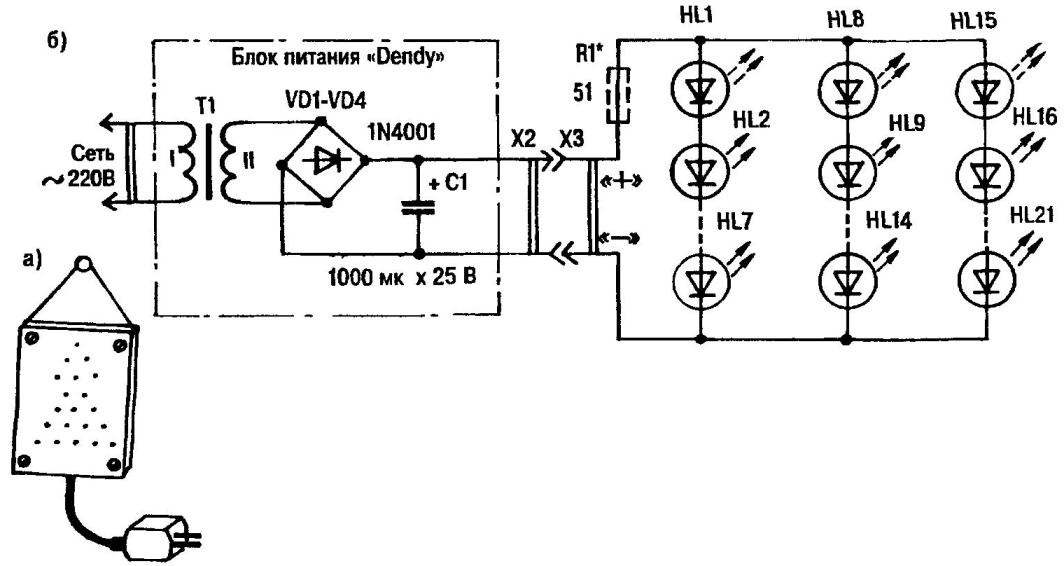 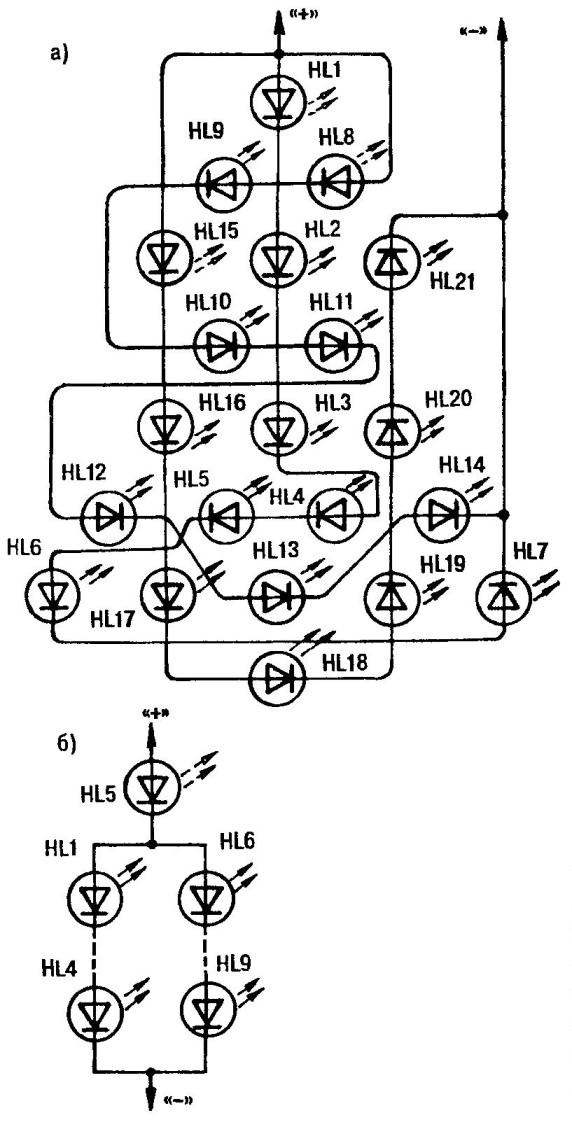 Fig. 3. Recommended connection of LEDs in the form of stylized Christmas trees (a) and its modification by the example of one of the sections of the electronic flashing garlands (b).
Next to the icon flashing LEDs are the letters of HL with the corresponding ordinal (for the scheme) number and code name, focusing on that, you can determine the color of light and other characteristics of the MSV. Among the most common — relatively inexpensive L-56BHD (red), L-56BGD (green), L-56BYD (yellow) King bright or equivalents. Outer diameter of these devices is of the order of 5 mm, which allows MSV to successfully place the panels with conventional LEDs types АЛ307БМ and КИПД40А1 – K (red), АЛ307ГМ and КИПД40А1-L (green), АЛ307ЖМ and КИПД40А1-W (yellow).
Now, after a brief acquaintance with a new class of optoelectronic devices, it is proposed to make an original new year souvenir with the use of flashing and conventional LEDs (Fig. 2A). In fact, this shimmering colored lights festoon (Fig. 26) of the three light-emitting sections on seven of semiconductor devices each of which is executed in the form of stylized Christmas trees.
As an energy source are ready made power supply. For example, video game consoles DENDY or more powerful SEGA MEGA DRIVE-2. But it is quite acceptable and improvised explosive device (constant voltage 14-16 V and current of 0.1—0.2 A output), made in the form of a plug-adapter and includes a step-down transformer T1, rectifier bridge VD1-VD4, filter capacitor C1, the input X1 and output x2 electrical connector.
When power is supplied to the led chain starts to blink with a small frequency (about 2 times per second). The frequency of flashes from each of the three MSV has its own, slightly different from the one indicated; hence the garland of shimmering lights, forming various combinations of light geometric shapes. On top of that effect here and the lack of strict synchronization between the CMOS oscillators included, as stressed above, in the flashing of the LEDs. In working schema is an element of chance, and the resulting illumination viewers do not get bored.
The design of the Christmas trees-the base may be different depending on the tastes and experience of the manufacturer. For example, a standard option for installation, use the front panel textolite 200x150x0,5 mm drilled in it according to the plan (Fig. In) 5 mm holes 21 led. The housing of each future Christmas lights inserted and glued to this Board compound or quick-drying “Moment” and electrical connection elements of the garland into a single unit is carried out by wire type MGPW-0.2 seconds using a small soldering iron, rosin and low-melting solder (soldering findings should not exceed 1-2). Rear and side walls of the tree-bases can be run from a one-sided foil-tion of fiberglass, fastened at the edges by soldering.
To manufacture no less attractive option Christmas souvenir take the foam the size 200×150 mm and thickness of 10-20 mm, which is stick the LEDs so that they formed the pattern tree. The findings of each of these semiconductor devices on the back of the foam to gently unbend and connect thin wires according to the wiring diagram (Fig. For).
As practice shows, the establishment of homemade, assembled in strict accordance with the schematic electrical diagram of a known-good radio doesn’t cause any difficulties even inexperienced beginners.
The most common mistake is the wrong polarity include one or more LEDs. To be safe it is recommended to solder in design (to the first specific surveys stay Christmas trees-garland) current limiting resistor R1, is highlighted in the circuit diagram (Fig. 26) by a dotted line. Then a souvenir included in the network. By measuring the voltage drop across R1 the voltmeter (preferably digital), we see that, although controlled value and is constantly changing, the readings are even with the simultaneous flash of all the LEDs do not exceed 3 V. If a different result we must look for errors in the installation.
If suddenly it turns out: the Board is designed perfectly, and controlled value somehow be less than 1.5 V, replace the above simple resistor bridge. Optimum can be considered a variant in which the current limiter remains in the scheme. Herewith, the value R1 is chosen such that the ratio U in volts for R1 in ohms does not exceed 0,06 (that is, the maximum current flowing through the resistor is the limiter, was no more than 60 mA).
Fans of the experiments, of course, is entitled to arrange the semiconductor light emitter to achieve the already established scheme the most expressive lighting effects. It is important to observe the rules of symmetry, including the color and types of LEDs for each of the Daisy chains. If reserve power supply unit, it might make sense to increase the number of Christmas lights in the souvenir to 27 pieces, using, for example, a modification (Fig. 36) circuit diagram of the device.
The reliability of such technical solution is guaranteed if the maximum current through the resistor R1 when debugging garlands not to exceed 120 mA.
S. ROMIC, Chernigov, Ukraine