“Dwarf” submarine or midget submarines occupy a special place in the underwater shipbuilding. Of them, in fact, grew large submarines with a displacement of tens of thousands of tons with crews of hundreds of people. Virtually all countries after the first small submarines switched to medium and larger submarines. And only two States continued to develop boats and large and small sizes -Italy and Japan.
In Italy the Maritime theaters was the fact that the base potential enemies – ports of France, Austria-Hungary and England (at Malta) were at a distance of 100 – 150 miles from the Italian coast. It is obvious that many of the tactical tasks at such distances did not require the giant submarines.
The story of midget submarines of Italy will begin with Delfino, the first submarine (Royal Navy) (RMI – Regia Marina Italiana). Chief designer – Giacinto Pullino. This boat was laid down and launched on the state-owned naval shipyard Regio Arsenale in La Spezia in 1895 She joined the fleet on 1 April 1895
The engineers believed that Delfino will act only in a submerged position. The boat was almost perfectly round-shaped case, two horizontal bow and one aft vertical rudder, two differentia tank in the extremities. It was equipped with sbrasyvanija lead keel.
Initially, the submarine was driven only by an electric motor, but in the course of extensive modernization 1902 -1904 years received 130-horsepower gasoline engine FIАТ for surface running. The battery consisted of 216 items, divided into two independent groups.
In 1902 – 1904 the boat was upgraded, in which inside the pressure hull placed fuel tanks, superstructure and the superstructure was rebuilt. After Delfino it was a submarine, which could loosely be regarded as combat. Soon the boat was transferred to Venice. 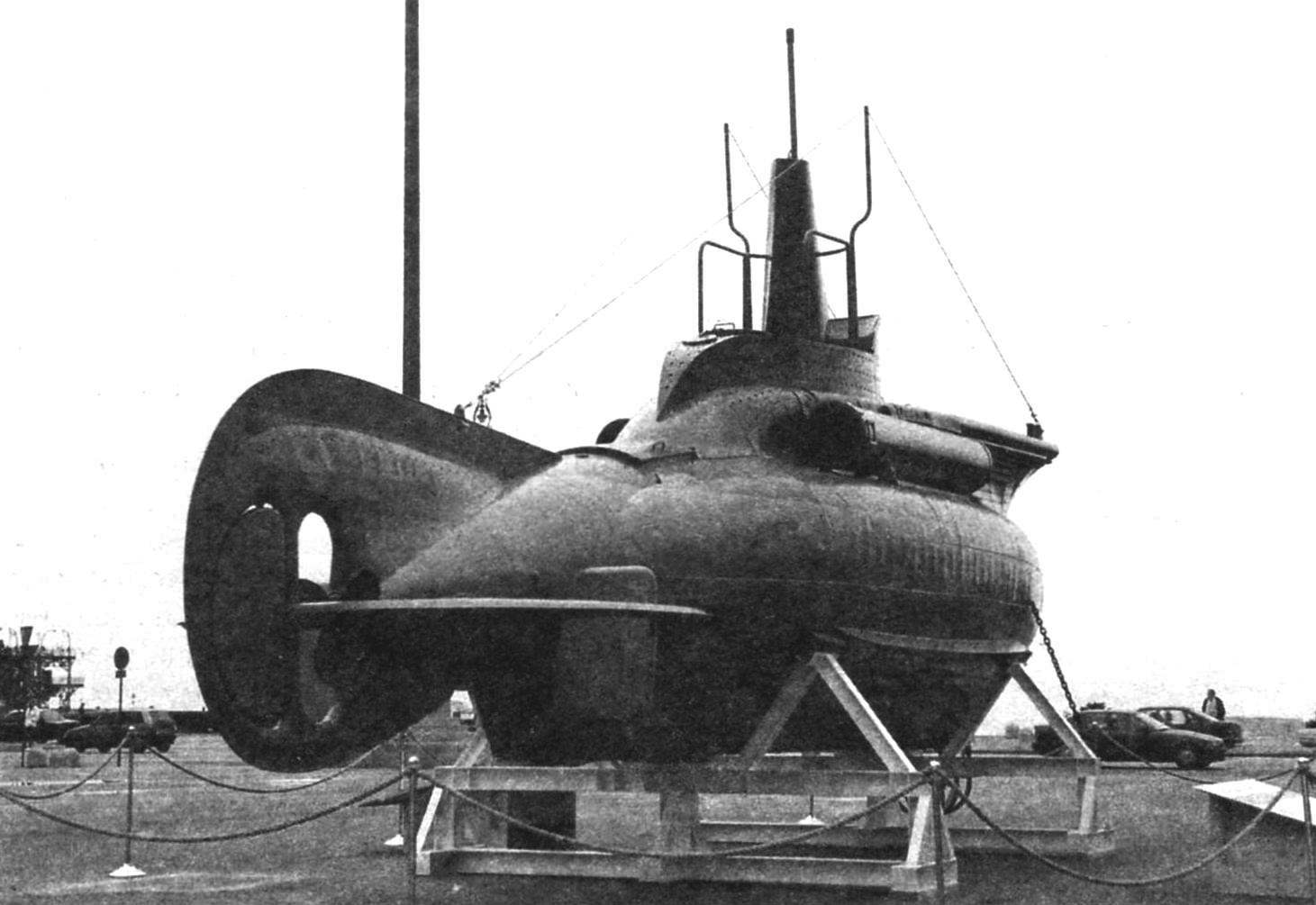 Submarine SV 22 exhibited on the square in Trieste
At the time Italy entered the war, the submarine was part of the 4th flotilla of submarines assigned to Venice. The boat was commanded by captain-Lieutenant (Tenente di Vascello) Alessandro Giacone.
In 1918, the submarine was transferred to Porto Corsini and 29 September 1918 years put in reserve. During the war, the boat 44 times out to sea, carrying out patrols from their bases and making educational trips. She was removed from the Navy list January 16, 1919 G.
In principle, such submarines were built in other navies. But in Italy the “heirs” Delfino became not only the medium and large boats. In 1915 -1916 years on the basis of the submarine at the shipyard of La Spezia was built six midget submarines (type A), the chief designer Angelo Belloni. Submarine A1 to A6 were single-hulled and had ballast tanks inside the pressure hull. Armament consisted of two exterior lattice torpedo tubes caliber 450 mm, had one torpedo inside.
The depth of the dive boat And was solid enough – 50 m. the Crew consisted of four people. Due to the low cruising range on the surface (12 nautical miles) the boat was being towed into position by a destroyer.
The development of this series of submarines was Italian midget submarine type with a more powerful power plant and a new torpedo tubes. The range increased almost ten times.

The performance characteristics of the Italian midget submarines
Just built three boats of a type In the project Edgardo Ferrati. B1 and B2 are quite actively used in coastal waters, but of participation in hostilities did not accept and immediately after the war were withdrawn in reserve. The OT was based in Venice and participation in military actions are not taken, because of the constant accidents of the power plant. In June 1918 she was disarmed.
After the First world war, developing the project type, the firm Sarget built the smallest boat of the SA-1 and SA-2 (- C Li – coastal “A” – type boat). Their dimensions allow to transport submarines by rail.
Boats SA was smaller than their predecessors. Torpedoes were open machines, attached to the outside, lower side ballast tanks. The immersion depth was up to 55 m; the crew consisted of two people. Technical innovation was the placement of the batteries in a separate small compartment at the bottom of the hull.
In April 1938 the construction of two submarines was completed. The tests took place in area of Venice until the fall of 1939. In the course of their revealed numerous design flaws. Therefore, the submarine was sent by rail to La Spezia, where he tried to address the identified concerns. In addition, the periscope extended from 2.5 to 4.5 m.
To fix it and failed, and in October 1939, both boats put on a funny.
In 1940, the concept of using midget submarines has undergone a radical change. According to new ideas, “baby” was to penetrate the enemy’s ports, to be delivered to them, the divers were attached to warships or merchant ships of the enemy explosive charges. 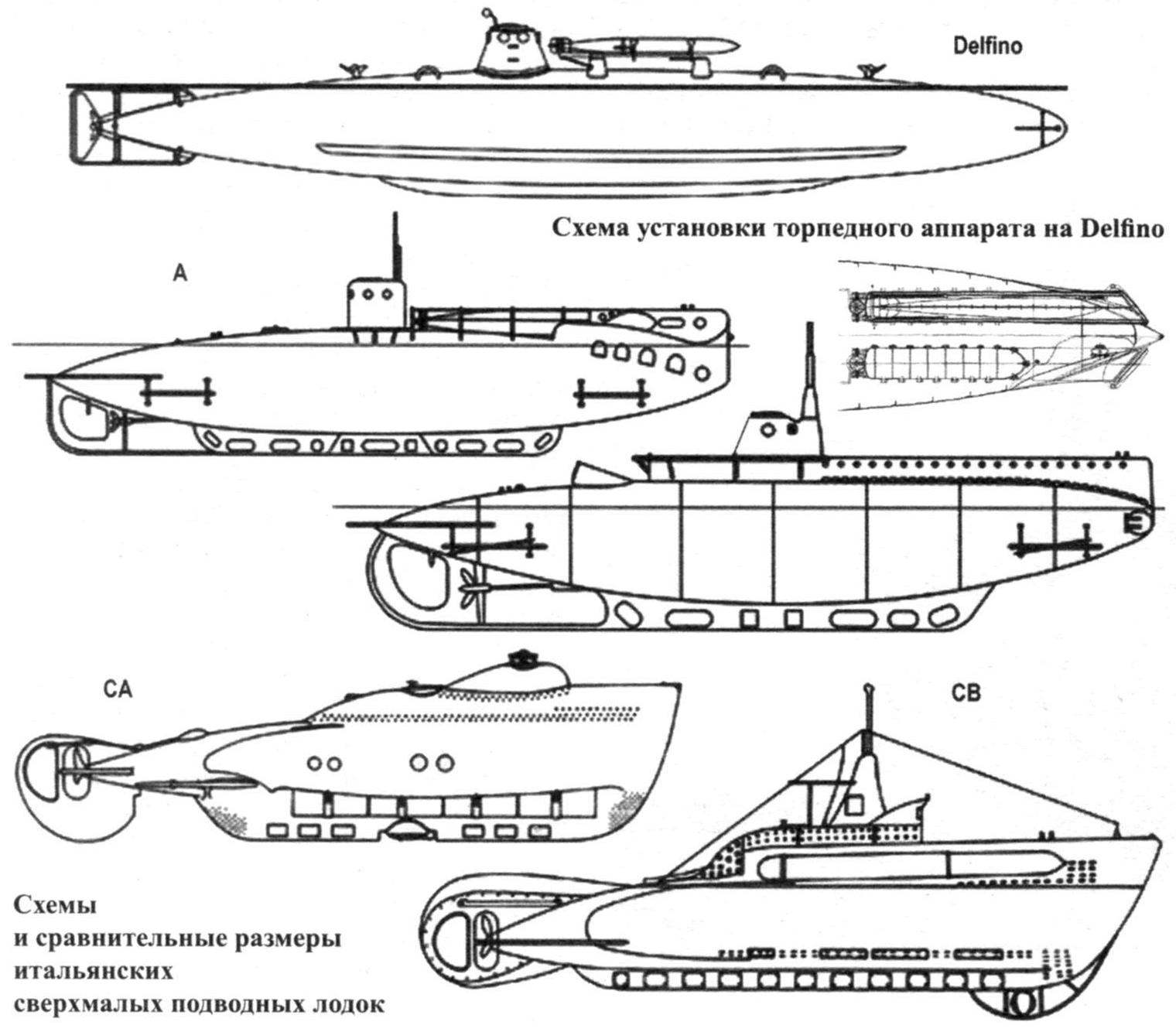 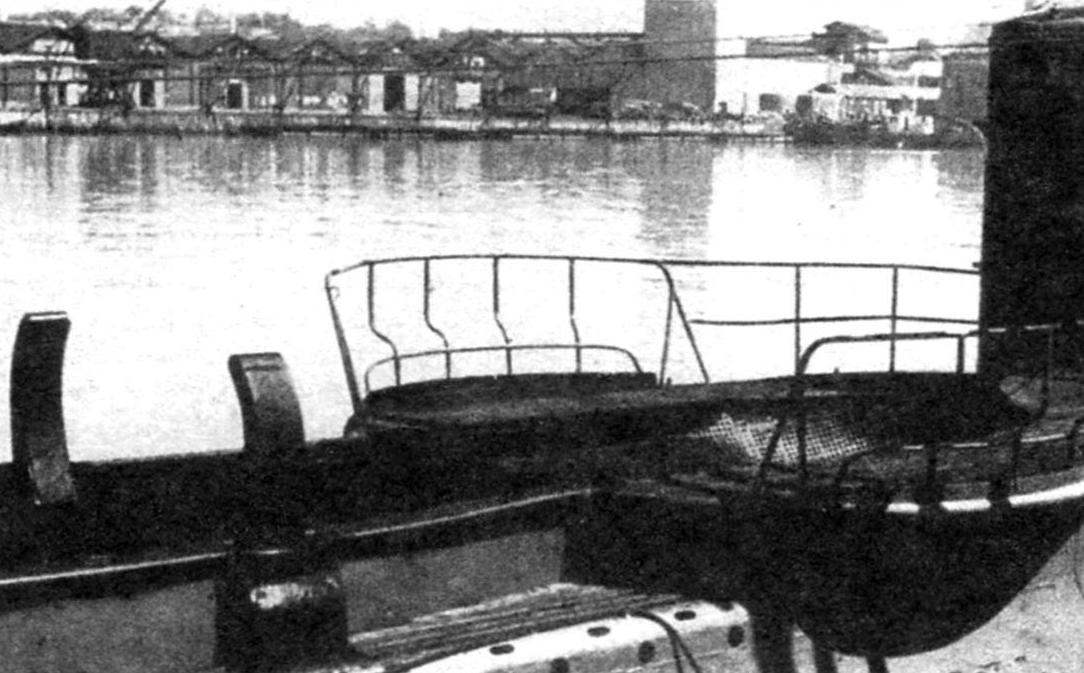 Boat “Leonardo da Vinci”, on the deck which is the place prepared and connecting devices for transporting a dwarf submarine CA 2 to the coast of America 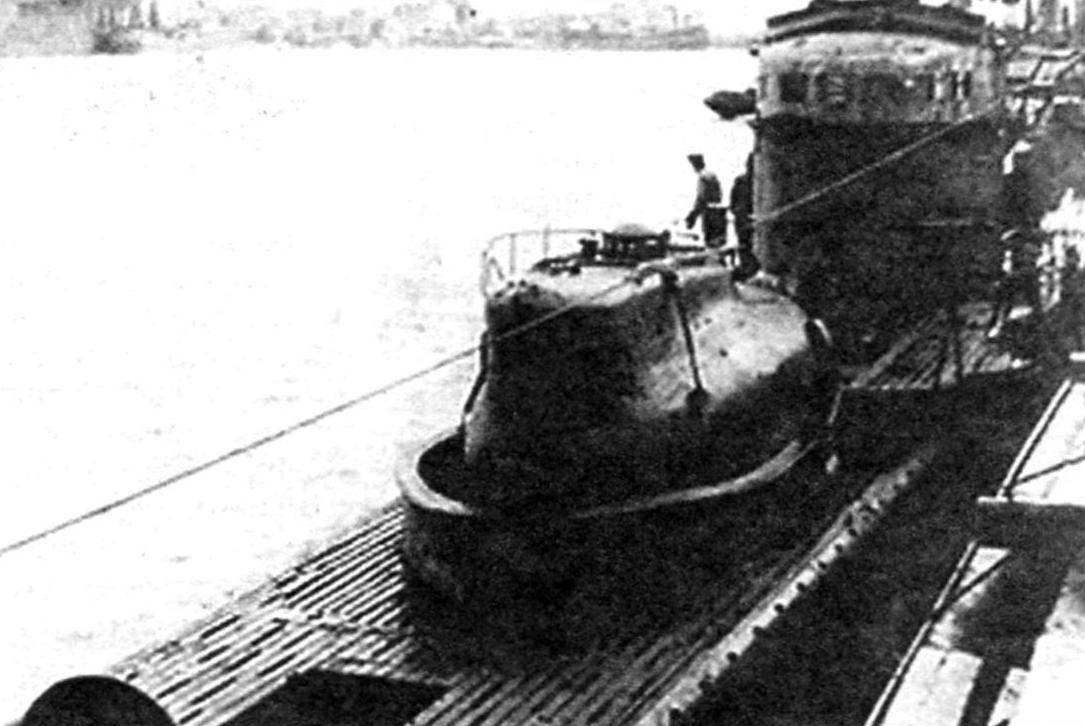 The special train carrying the boat of CA 2 in Bordeaux 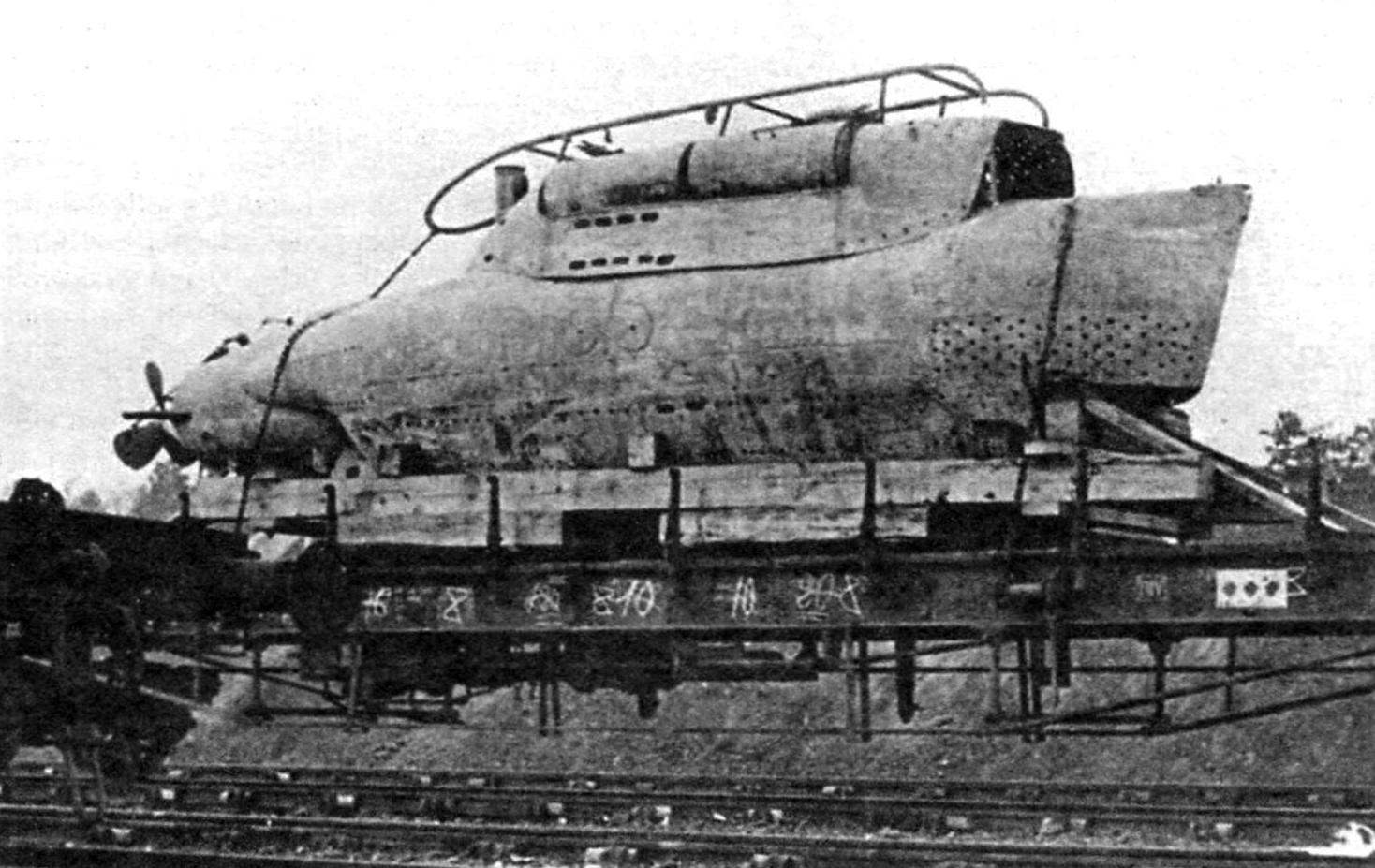 Submarine SA 2 on a train platform taken to Bordeaux, where she was mounted on a large boat carrier “Leonardo da Vinci”
In accordance with this concept in January 1941 began the alteration of both boats SA. Increased their speed and radius of action. The periscope was removed. The old tower height of 85 cm was replaced with transparent plexiglass dome.
Instead of torpedoes on the sides placed 8 discharged explosive charges weighing 100 kg, each equipped with a Fuze with clockwork. In addition, the boat can take 20 incendiary 2-kg min. magnetic suction cups, convenient for attachment to the underwater part of the attacked ship.
The restructuring of SA-2 finished in November 1941, and CA-1 in February 1942.
During the tests, under the direction of Lieutenant Massana mountain lake Iseo in Northern Italy has revealed new flaws…
In 1941, the Italian designers have taken a new step in the construction of midget submarines appeared more sophisticated submarines of the type SV. These “mosquitoes” was polutorospalnye, nasal horizontal rudders was missing, and replaced them with aft wheelhouse complex that its characteristics are consistent with a similar mechanism of modern single-shaft submarines. There were built 22 of these submarines, of which the Italian fleet consisted of 12. Italian dwarf submarines SV participated in the fighting in the Black sea during the Second world war.
On the Black sea
In 1941, German forces quickly advanced deep into Soviet territory. The garrisons of Odessa and Sevastopol have been cut off from the main force and was supplied by sea. The Romanian Navy is significantly inferior to the Soviet black sea fleet. Italian warships of Turkey through the Straits did not miss.
To help the Germans in the blockade from the sea besieged Sevastopol in the spring of 1942 arrived in Yalta seamen RМI. In addition to the torpedo boats in the Black sea by rail was delivered 6 midget submarines of SV.
From may 1942, an increasing number of Soviet submarines were withdrawn from combat patrol and was assigned to the line supply Novorossiysk – Sevastopol. 26 Jun 1942 the submarine S-32 (commander – captain 3rd rank S. K. Pavlenko) has been moved to Sevastopol on the surface at maximum speed. In the night of 26 June in the district of Cape AI-Tudor 60 miles from Sebastopol took the position of Italian ultra-small submarine SV-3 under the command of Lieutenant-commander Giovani Sorentino. From afar he discovered the C-32 noise of diesels and went on the attack. Two torpedoes caught in Board, C-32, instantly sank, the crew escaped no one.
Italian sources have reported the sinking of two Soviet submarines, Shch-214 and U-203. But these results are controversial.
Incurred losses and Italian boats. On the night of 13 June 1942 torpedo boats of the black sea fleet carried out a RAID on Yalta. Torpedo from D-3 was destroyed by SV-5, along with the commander.
The attack on new York
In 1942 there was a plan to strike at the end of the 1943 attack on the Harbor of new York saboteurs from submarines of type SA. One of these boats was supposed to be delivered to the target on Board ocean-going submarine “Leonardo da Vinci”. For this purpose, the sub-carrier dismantled 100-mm gun. The author of this plan was the diver-the saboteur Borghese, by the way became may 1 1943 commander MAS Décima – the 10th flotilla MAC. In his report to the command Borghese wrote: “transport SA on the deck of ocean-going submarine, similar to the kangaroo, wearing your baby in a bag”. Shipping boats SA in Bordeaux and beginning of the reconstruction Borghese personally supervised. Shortly Borghese, departed from Bordeaux, and debugging “Kangaroo” was carried out under the control of major Dryer.
However, the allies in may 1943 sunk submarine “Leonardo da Vinci”. Along with the boat was lost and its commander, the only one prepared for this operation.
The fate of the boats SV
More sophisticated boats SV appeared in the Italian Navy, when the situation for their intensive use was already mesopotamy. Because pretty fast almost the whole submarine fleet was destroyed.
Just some survived. For example, boat SV-20, which over the years of its existence managed to visit Italian, German, and Yugoslav zalozetskiy, and now exhibited in the Technical Museum in Croatia.
2 may 1945 the boat was captured in the Floor of the army of Yugoslavia, and in 1959 she became an exhibit Tehnicki Muzej in Zagreb, Croatia.
L. KASHCHEEV