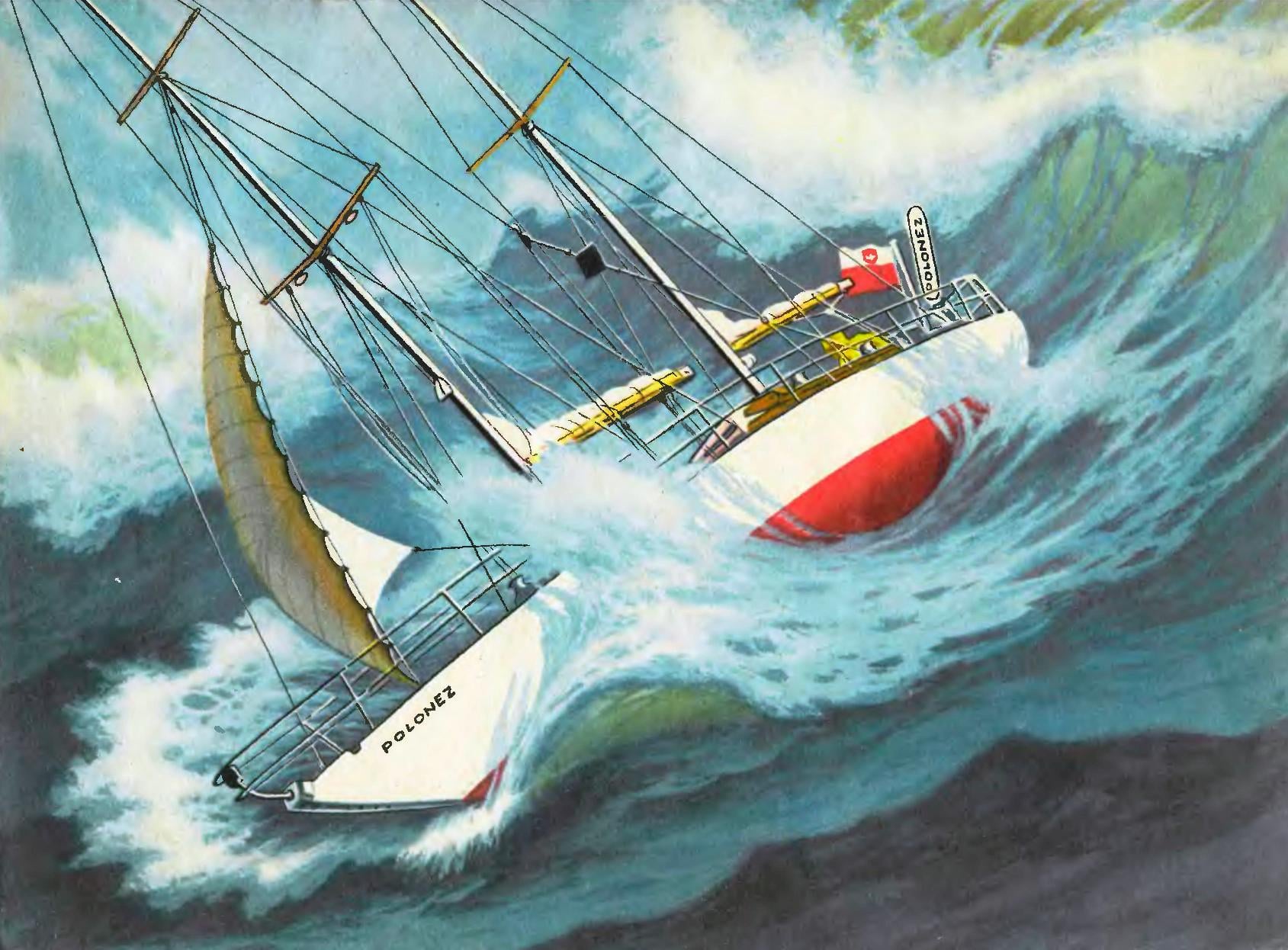 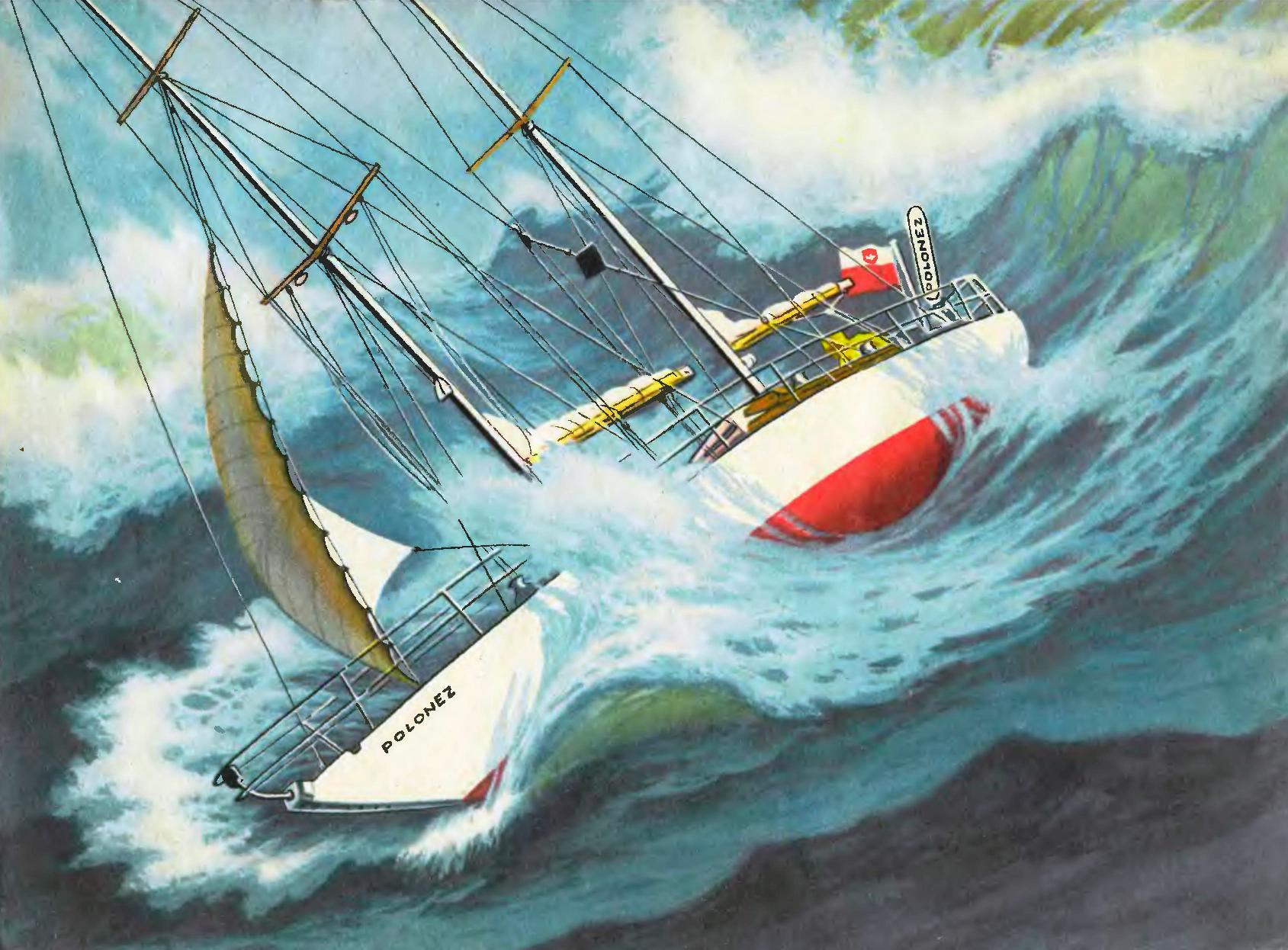 The first time I saw “Polonaise” in the picture. He was standing on one of the Central squares of Warsaw, surrounded by a dense ring of spectators. Interest in the yacht and its captain, engineer and journalist Krzysztof Baranovsky was extremely well-deserved. The first among the poles and the thirteenth in the world, he skirted “an old cannibal” — Cape horn — solo.
Only 204 days it took a brave athlete to record time to close the ring around the globe. And in this way only three short of Parking: in Cape town (South Africa), Hobart (Tasmania) and Port Stanley (Falkland Islands).
Astern of the “Polonez” — the winner of the world marathon — more than 40 thousand nautical miles. Three times crossed the Atlantic, left behind “roaring forties” three oceans, the terrible Cape horn, unfriendly maze of the Falkland Islands.
Victory it was possible to hunt only in the zone of constant winds are in the forties latitudes of the southern hemisphere, and Baranowski boldly chooses the most difficult and dangerous path. “Polonaise” was literally flying on the wings of the horrendous storms “southern ring”. Even after removing the mizzenmast, Baranowski has passed the Pacific ocean for 45 days — this was just on the shoulder of the clippers — the famous racers of the ocean.
Meeting with the “Polonaise” making your land “circle of honor” was held in Moscow at the exhibition “XXX years of socialist Poland.” In those days the territory of water stadium of the capital, like bright colors, filled dozens of yachts, dinghies, Motorboats, pleasure boats and tourist boats — the Polish shipbuilders showed products of the highest world class. On Khimki reservoir sail large sailing yacht. Among them exceptionally successful, modern construction were allocated a compact, high-speed “Taurus”, and still the undisputed favorite of the exhibition was “Polonaise,” created as “Taurus”, the talented engineers at the Szczecin shipyard named Leonida Teligi. 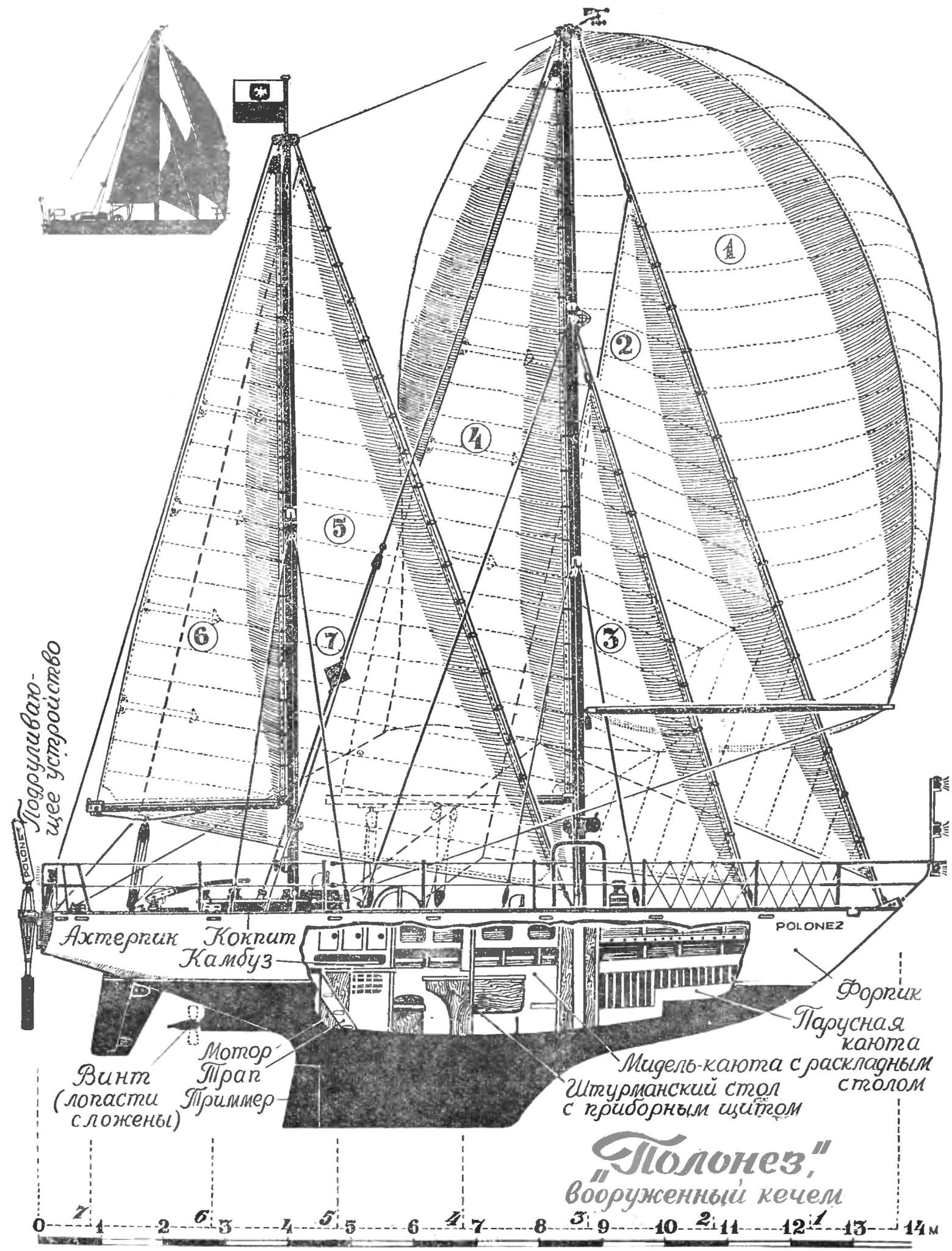 In Tasmania, preparing for the most difficult transition in the “roaring forties” of the Pacific ocean, Baranowski took the mizzen mast. This has increased the stability of the yacht, the Displacement of the center of the sail in the nose made it more stable on the course with a passing storm.
Under the blows of a wind moaning Indian ocean. In his frantic jets “Polonaise” carries with it a storm staysail. However, it is possible to manage and without it the boat will go under one bare masts. Thruster is unable to keep the boat on course. To reduce yaw, Baranowski corrode from the stern a 200 m rope… “don’t know how wave overturned the “Polonaise”. That boat really has gone down the masts installed later on traces inside”1.
Book K. Baranovsky “the Road to the horn” forthcoming in publishing house “Young guard”.
No tow rope or lying in the drift was not given the desired effect. Three times the boat overturned, although taken all measures. Then, Baranowski decided on the latter, untested, method is to go forward into the wind at full speed. And then the advantage of fast yachts turns to her disadvantage. Once on the slope of the wave, “Polonaise” rapidly came to gliding, and with all speed ran into the sole ahead of the mountain-wave. From hard braking there is a risk to roll through the nose. 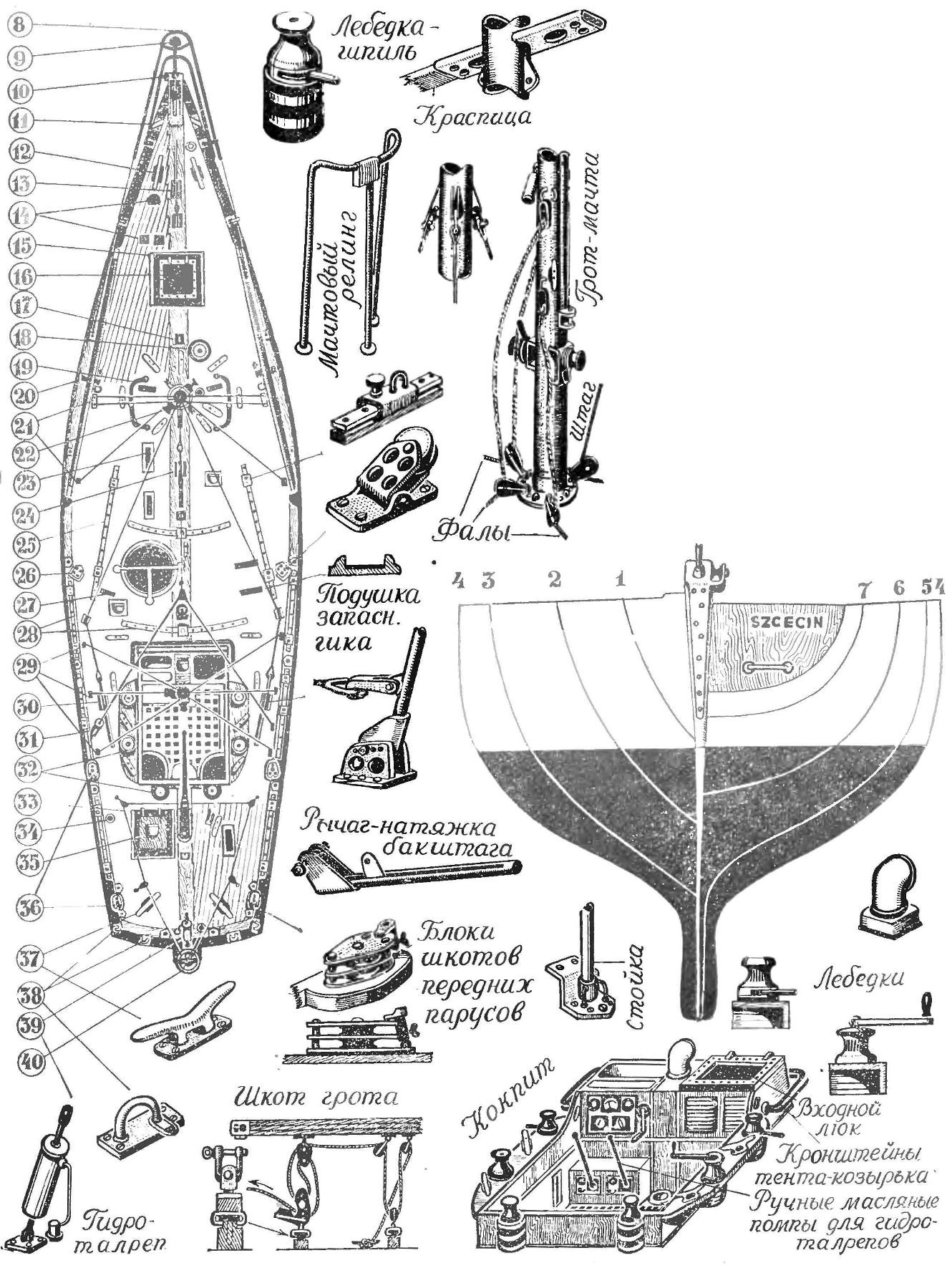 1 — Spinnaker, 2 — masthead staysail (jib), 3 — staysail, 4 — you 5 — the big mizzen staysail (apsel’), 6 — mizzen, 7 — radar reflector, 8 — bow pulpit, 9 — navigation lights 10 — anchor rope roller, 11 — bale strap, 12 — mooring ducks, 13 — tensioning lever examples walls-the forestay, 14 — pillows anchors, 15 — vorluk, 16 — a Styrofoam cover, 17 mount the forestay, 18 — windlass, 19 — mast roof rails, 20 — pillow spare Spinnaker-boom, a 21—vant the vant potency the mainmast, 22 — winches for halyards, 23 — prismatic illuminator, 24 — tensioner lever of the mizzen forestay, 25 — insignia of the motion units, the jib of the Scots, 26 – block-“the frog”, a 27 — cushion styling spare geeks, 28 — straps of the blocks of the Scots, 29 — vant-vant potency mizzen, 30 — the lever of a stretch grotto-backstay, 31 — hydroterra grotto-Fortuna, 32 — hoist the Scots, 33 — Stuhr-wire to the steering device 34, the output of the antenna, 35 — achterhoek with fan, 36 — dvuhskatnye deck blocks for Spinnaker Scots and apses, 37-38—mooring devices, 39 — hydroterra Akhter-the forestay, 40 — output electric cable.
“Swimming among green hills crowned with something where white mane was fantastic, writes in his diaries Baranowski. — The “roaring forties” — all the abnormal water area…”
Not accidentally dashing clipper captains were forbidden to look back steering. “Riding” a passing storm, their ships frantically rushed forward, and behind them, hanging over the stern, was being chased by the ridges of the giant trees. It seemed that one more second, and swirling the comb will whisk people from deck. This could not withstand the nerves of even the most seasoned “salty” sailors.
Compared to the yacht clipper is a large ship. At the last moment feed him rose up, seething foam breaker wraps around the ship sides. The yacht is small. Crumbling ridge dominates, tilt it, like a match, break a wooden mast, taking sails and rigging. To withstand the storms “fortieth”, only needed a durable, reliable design. And “Polonaise” withstood, withstood his iron mast, stood captain…
“Polonaise” was created not as a record of special ship construction. The basis for it was serial a cutter yacht of the type “Arcturus” on the case of oak and mahogany. To facilitate the work of the athlete-singles adopted was the two — masted version- ketch. This increased the number of sails. When small amounts of each can be had without taking out reefs and change sail in the largest range. The mainsail and mizzen — narrow and high, great progress has been headsail. On steel masts, equipped with winches, halyards skipped inside, all sheets can be controlled from the cockpit, is equipped with six powerful winches. Immediately two handles of hand pumps for lifting gidrotalzita, panel navigation, and engine instruments; to the bracket under the tiller, a place to mount the compass. Well withstood the test of the tropics all sensible things and the rigging of the yacht, made of stainless steel — there was not one spot of rust. 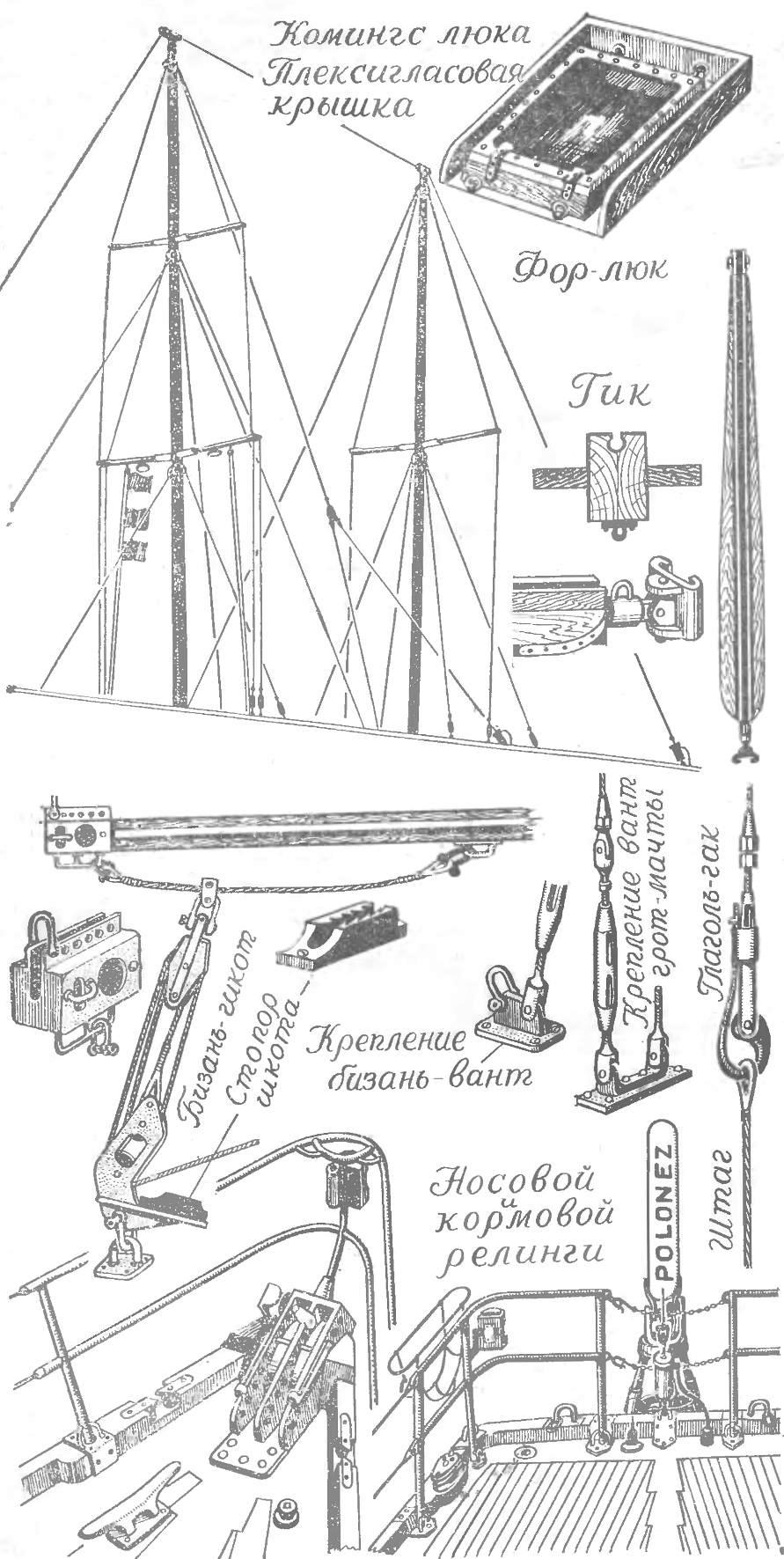 Access hatch from cockpit and forlock covered with the transparent Plexiglas lids. In several places in the deck embedded prismatic Windows. Mainly work inside the boat — cabin at the exit to the cockpit. This was carefully enclosed motor, radio, switch Board, galley with cabinets, stove, sink and swinging dining table. In front of the chart table a large shield with navigation devices. Here in a plexiglass dome could without climbing on the deck to watch the sails. On the port side bunk. Extensive lockers fore and after cabins intended for the storage of sails.
The hull is white, the underwater part — dark red, deck light, unpainted, only vaterveys Board in the diametrical plane slightly tinted. Inside the cockpit is painted a bright green and blue paint, coaming and hatches of mahogany. Pedestals winches recruited from alternating light and dark boards, varnished transom, this boat name and port of registry.
The model of the “Polonaise”, the latest record of the sailboat can be made as an exhibit in the school Museum. She is a very will adorn the interior of every lover of the sea. Particularly well the boat would look when “filled with wind” sail, under Spinnaker.
V. NAUMENKOV, the captain of the second rank