It would seem that there is nothing easier, than to hammer in a nail. This can make any boy, not to mention women. Why is it even the men but this seemingly simple operation sometimes does not go smoothly: the nail is hammered badly and suddenly bent; or the hammer blow falls not on the nail head, and a finger!

It turns out that this common and seemingly simple process has its rules and peculiarities, which cannot be ignored.

So, in the fresh, damp wood to hammer a nail is easier than in the dry, because the elasticity of this wood is lowered. And to compound has turned solid, the nail must be of sufficient length to enter the structure to which it is hammered, at least one-third.

To give greater strength to hammer together boards, nails are driven at an angle (1).

In dense wood nail included bad. So it is not bent, it is necessary to hold with a pliers (2).

In siding planks (planks, battens) with width of 100 — 120 mm for facades of wooden houses hammered one nail. The Board width of more than 130mm fastened by two nails. Nailing a Board, especially wide and thick, it is necessary to consider its layering: it depends on which way it will bend when warping.

To avoid splitting of the wood, the nail diameter must be no more than one quarter of the thickness of the nailed Board. When driving the nail in a thin plate, it first needs to be blunt, what the point of the bite nail clippers. A nail with a blunt end will only crush and penetrate the wood fibers and will not crack the plate. If nails are driven in near the end or edge of the Board, they should pre-drill a hole with a diameter slightly less than the thickness of the nail. Preparatory hole is also recommended to do when using solid wood (3). 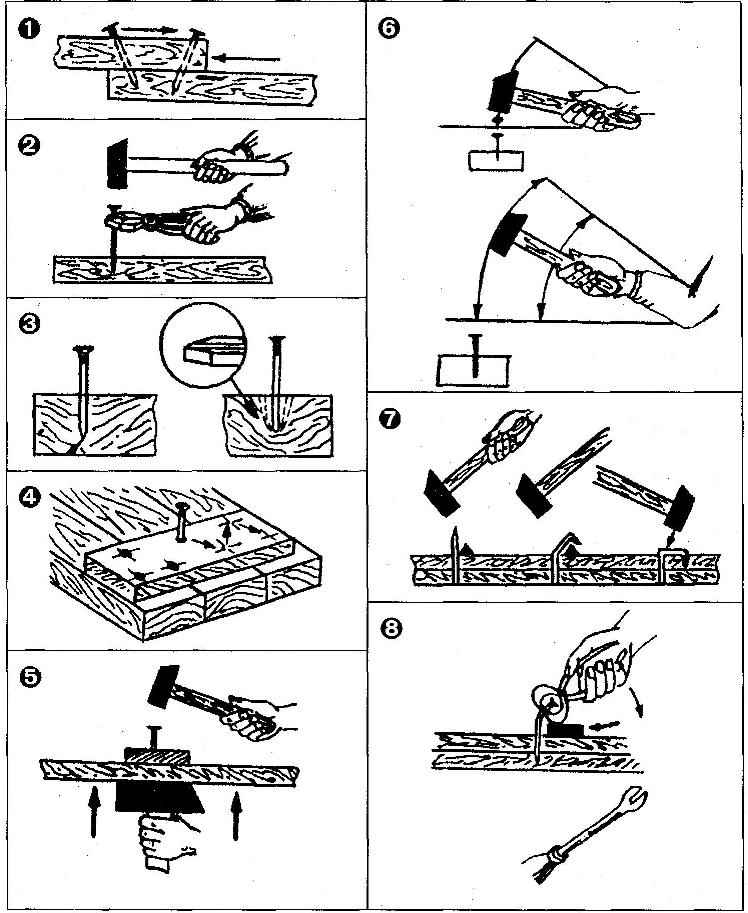 If you need to hammer a few nails, so that the workpiece is not splintered, it is necessary to place them not on the same line and in a staggered manner, in two or three rows (4).

When the connection boards on what is not supported is the weight of it when nailing prop up the bottom of something massive, for example, a large hammer or sledgehammer (5).

Quality nailing depends on which tool you use. The most convenient hammer weighing 400 — 500 g Begin to hammer the nails first naselenie “brush” strokes. Making sure that the nail enters correctly, it finish already with power, “elbow” (6). Scored with two or three blows, the nail will hold on tight, because there is less split wood layers.

If you want to easily and safely bend the speaker on the other side of the Board the nail, it is best to use an old triangular file such a size that the protruding end of the nail was a half-two times longer than the verge of a file. The edge of a file tightly applied to the protruding end of the nail and lightly tap it folded. Then file out, and formed a hook, it is completely hammered into the wood (7).

For pulling out nails is better to use a claw hammer or pincers, which provide a steady grip and good focus. First with a screwdriver or other sharp tool or pick at folded hat on the old nail and then

grab it with the pliers or claw (8). In order not to damage the surface under the clamp enclose a wooden block or metal plate.