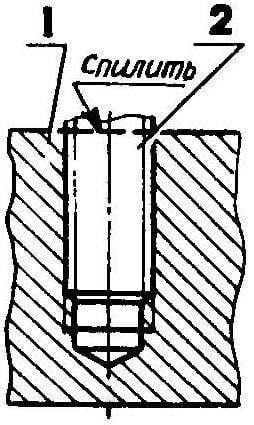 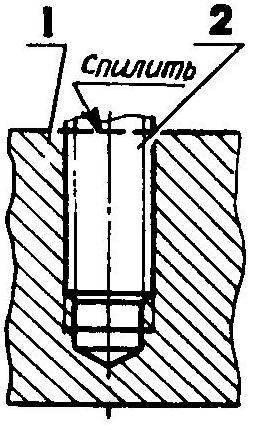 Hard turns (as, indeed, trudnosmyvaemye) fastener (screw or stud) face many troubles, both small and large. The latter can be safely attributed the breakage in the body parts of the stud or screw, as the extraction residue of the fastener from a threaded hole or socket parts is very thin, requires great accuracy. The reasons of breakages of fasteners can be several: excess torque; the use of low-grade threaded products; “welding” of the parts and threads of the fastener due to corrosion or high-temperature heating, and others.

Cliffs fasteners can be divided into three kinds: the first is when part of the fastener, remaining in the body parts that protrude above the surface; the second when breakage occurred of the fastener flush with the surface of the part; and finally the third when a broken stud or screw occurred below the surface of the part. This distinction is made because each of these types of breakages of hardware requires its own approach to the extraction residue.

The cliff is located above the surface of the part

If the portion of the shank of the broken bolt (stud) protrudes above the surface of the part (for example, lost one head of the fastener), soaked beforehand for a few times the threads in the nest a special fluid or, in a pinch, kerosene and after a suitable time, you can still try to turn the rest of the fastener, exciting using the appropriate special tools: crimping pliers, pipe wrench, vise, etc.

Another trick is welded to the end face of the protruding part of the rod-lever and after impregnation with liquid thread to try to turn the rest of the hardware. 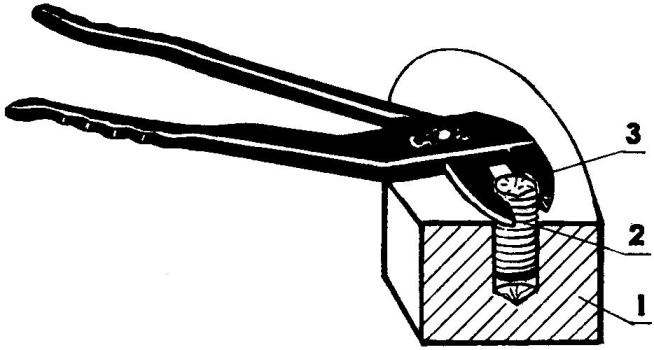 Breakage of the fastener above the workpiece surface:

Sometimes this succeeded, but if not, you will have to use the following method of extracting the remainder of the fastener from a threaded hole or socket — drilling the body of the rod before carving and chiseling of the threads of the fastener from the workpiece. Removing the turns of thread can be a hook from stiff wire. Operation, it is desirable to start from the bottom, it is easier to make an initial engagement. Besides, is not extracted the upper coils of the fastener will protect against damage from crochet thread details. With small features, this method is applicable in the following two most frequently encountered in practice in case of breakage of fasteners.

Open flush with the surface of the part

Perhaps the most serious case. If possible, it is necessary to gash the end of the fastener to become equal and by defining more precisely its center, to make here a deep core. Then the drill is equal to the internal diameter of the thread of the fastener (or slightly less), to drill through the axial hole in the balance. On the hardware, measure the inner diameter of the thread is very difficult, so, if there is an access hole, it is best to measure the diameter “in the light”. When that is not possible, then you should use the following table. 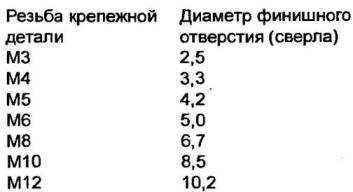 When the diameter of the shank of the fastener is large enough, then the operation bore his body to better hold a few techniques over and over again increasing the diameter of the drill to the finish. If the threaded hole and in details through, then reaming, it is advisable to start from the reverse side of the part—end of the fastener there is certainly flat, but often it already has the center hole, and then the task easier is to do the core in this case is not necessary.

The open is below the surface of the part

For drilling, especially, as in the previous case, it is necessary to take a deep core sample exactly on the axis of the fastener. This is a difficult task, especially because the end is usually uneven, and to prepare it (make it flat) is not possible. But there is a solution: it is necessary to choose the appropriate Tolochko cut out of a tube with an outer diameter of the diameter of the socket and a drill with a diameter equal to the passage hole in the hub to drill a pilot hole in the chip hardware. Then the drill is equal to the internal diameter (or slightly smaller) to drill out the hole. The remains of the core (turns of the thread) carefully not to damage the thread details, pick out from its grooves. If the hardware broke off and deep threads of the hole (socket) is enough to “hook” the corresponding tap (a fine), it remains Possible to cut them at the same time and precalibrated thread.

In all three cases of bummer fasteners, but more than anything, in the second and third cases applicable to the use of a new device, called the foreign reference extractor (probably from the Latin word ex^IIT — fetched), it is Sold in sets of a few e-tuk for fasteners with threads a certain interval (e.g. M3 — MB; M6 — M8; M8 — M12, etc.) complete with the corresponding drill, and sometimes with sleeves. Buy a set with sextractor under the big thread is hardly appropriate, so as to break off such hardware is very difficult (unless using the pipe-lever), rather, they pluck the thread.

Breakage of the fastener flush with the surface details:

The extractor resembles a tap, but without the longitudinal grooves. The working part is conical and it has a left threaded. When screwing the extractor into the hole drilled in the remainder of the fastener (having a right-hand thread), there is eversion of the latter.

The beginning of the operation is the same as in the second and third cases: nakaniwa center, drilling axial holes with a diameter corresponding to the extractor and then the extractor.

At the end of the operation, even if successful, removing the rest of the screw or stud, threaded othersthe details necessary to calibrate the restorer or fine thread tap. 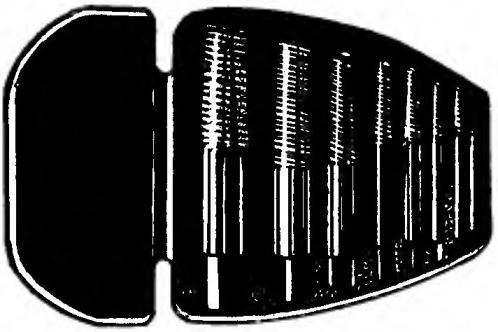 A set of extractors

Extractor for extracting residues of fasteners with right-hand thread

If the operation to remove the remainder did not go well and the carving details were still hopelessly flawed, have the hole drilled and cut in it the thread a little more (near the row) diameter, and used for fastening, or other appropriate hardware.

When such a solution is unacceptable and to connect the parts required fastener with the same thread, you can do the following. Rassverlit, as in the previous case, the hole (8-10 mm larger), cut into in this thread and screw it futerko— threaded bushing with the same internal thread and outer, corresponding to the hole.