It is generally accepted that a square room is much easier for furniture placement, looks better. In this sense, we are not lucky to have got the so-called “pencil case”, 3X6,3 m. to change such unfavorable ratio, decided to separate the room, book wall, dividing its area into two independent functional areas. This was motivated by the solution of the wall; it was built we had store-bought sofa.
Wall-Cabinet it was decided to make unit shelves, resting on a stand, towering over the sofa, and mezzanine. The face of the wall, all open, not glazed, and only a mezzanine has panelled doors and the back side is a blank, sewn hardboard — fiberboard.

Fig. 1. Wall Assembly:
1 — mezzanine. 2 —unit shelves, 3 — the sofa, right mounting bracket to the ceiling
The Cabinet depth is 240 mm. At first glance, this may seem irrational, there is no way to put books in two rows. However, it had to take into account that the increase in the total thickness of the Cabinet-partition-weighted all construction. The wall is assembled from shields, and improvised, but made on the principle furniture. First going frame — without the frame, back to back, from bruskov by section 8х50мм, Then the eye on both sides paste plywood 4 mm thick, and the top even to the plastic. For greater rigidity transverse bars of the frame were placed in increments of 500 mm, but must take into account the subsequent locations of the joints with other elements of the wardrobe. The thickness of the thus obtained boards was 20 mm. 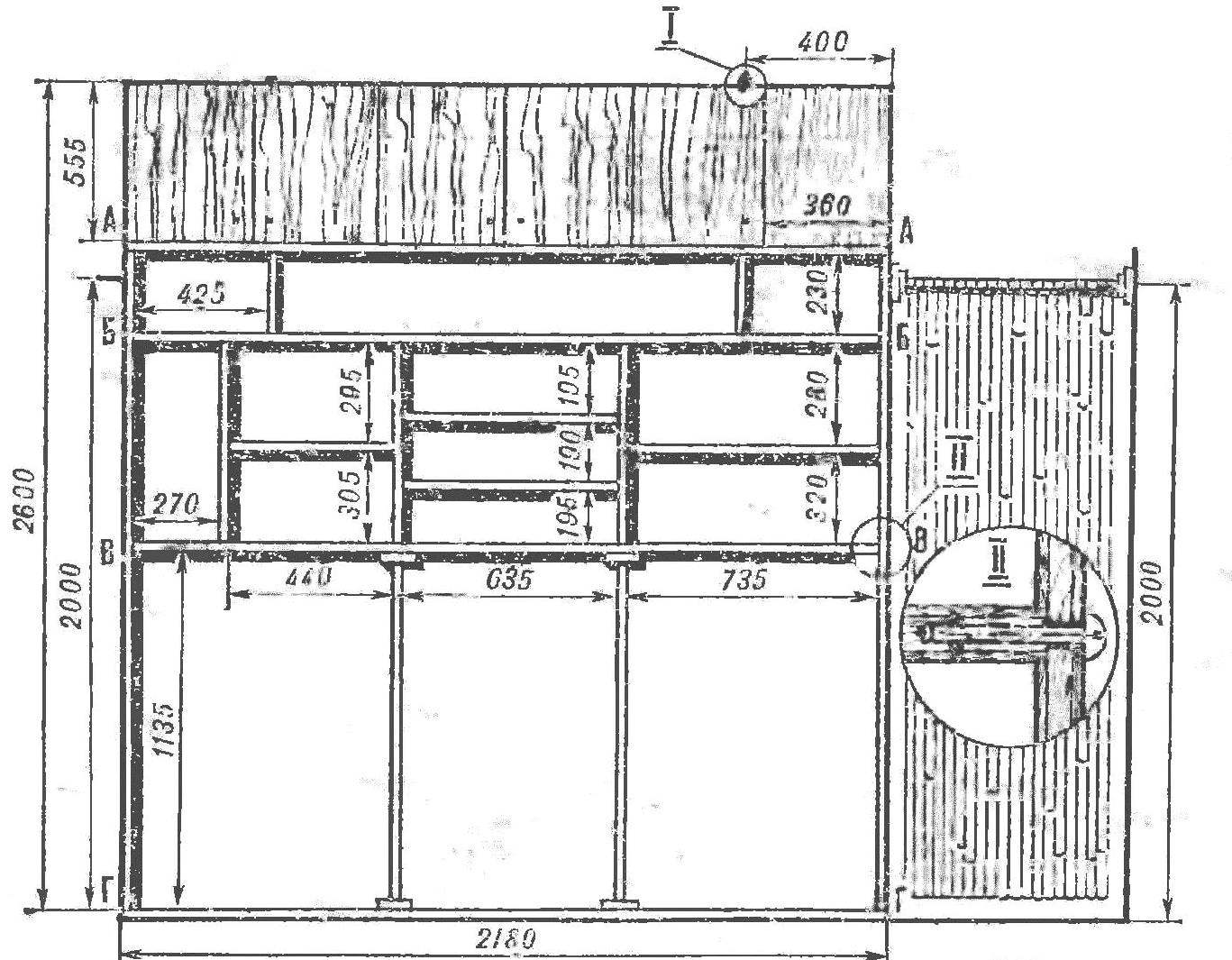 Fig. 2.Scheme of the wall.
The only glue was the casein. The advantage of it over other — low cost, ease of use, absolute reliability; years of exploitation of the wall proved it.
For mutual fastening between the elements of design in boards are provided grooves with a depth of 6 mm. Special attention was paid to the accuracy of compliance with the sizes of the boards and grooves in them. In areas A, B, C and d (see Fig. 2) horizontal boards and vertical bearing attached using a bolted connection. From all other places the mount — on glue.
The last operation of manufacture of the shield — sticker on front edge of shelves in a narrow strip plate. You should pay attention to the thoroughness of execution attaching. Brushing glue narrow wall shelf and slit the plastic, and put them on top of the blend R^ynu thickness of 20 mm, with pulling it to the shield with rubber cord. After drying, the excess glue is gently removed with a plane or file. Such a block is full set in its place, increasing its two powerful brackets (see R and S. 3).

Fig. 3. Additional bracket for shelves; on the left flange bracket
The mezzanine is a box-shaped panel design with two vertical partitions. From the front it is closed with six panelled doors, lined with plastic. After final Assembly of the rack with mezzanine, all of his backside neatly sheathed with thin sheets of fiberboard.
For the full contiguity of the Cabinet to the Wall in the place of his set cut the relevant portion of the floor. On the opposite side of the Cabinet in a special metal sleeve on the sidewall of the Cabinet and the wall, a wooden rod with a diameter of 35 mm. in addition to ensuring the stability of the partitions, the rod performs and decorative floors on it are hung threads “bamboo” curtain.
The mezzanine is also fixed after setting the block is full: screws and special bolts through the upper shield and the ceiling.