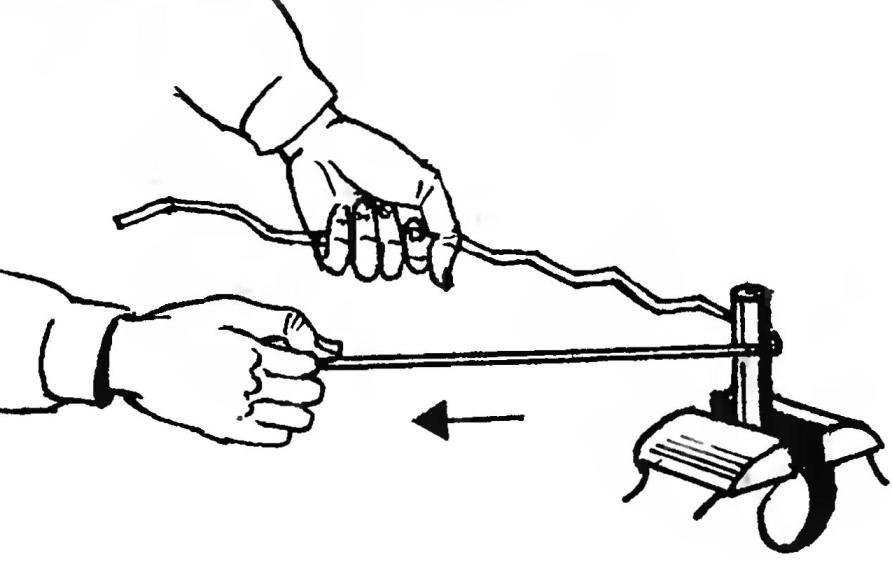 Preparation. Modelers and hobbyists often use for their constructions of sheet metal, has a used, with bends and dents. Removing them (the edits) is usually carried out with a hammer, on a massive steel plate with a fairly smooth surface. To edit the details of a small size, you can use a section of steel I-beams or channel.
Hammer it is better to take with a round smooth polished striker: it most convenient to edit as the square firing pin leaves marks in the form of nicks. Parts and sheets of soft non-ferrous metals and alloys most often ruled by brass or aluminum with a hammer and a mallet (a hammer of solid wood).
The metal can rule both cold and heated state. In the latter case, increases the plasticity of the material and facilitates the correction of defects. Details of mild steel heated to a temperature of 750 — 760°C (dark cherry-red heat), made of aluminum up to 300°C. Further increase in temperature may lead to burnout of the metal. Fearing this, sometimes produce partially heated edit details — only to 140 — 150°C
edit. Strip metal is easily the most correction. First of all, draw a pencil or chalk the curve. Then the treated strip is placed on the right plate is convex up, so that the strip in contact with the plate bottom side (Fig.1). Blows applied on the convex parts of the rounded side of the hammer, adjusting the force of impact depending on the strip thickness and radius of curvature. As straightening weaken the force of the blow and turning the strip alternately from one side to the other, seeking full redress. 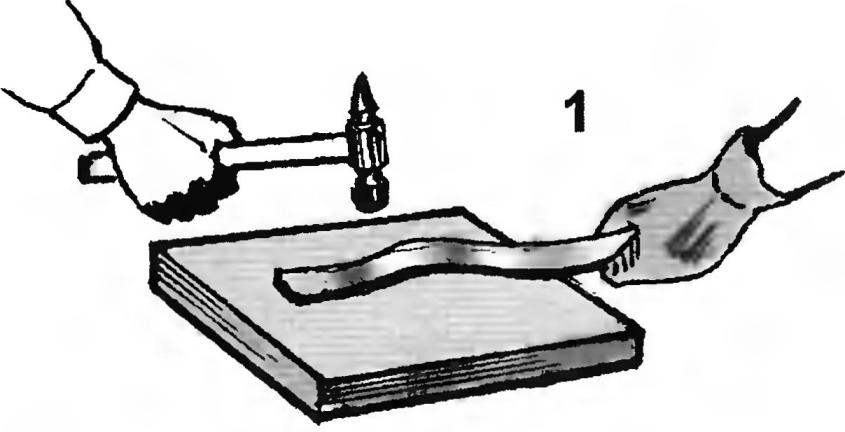 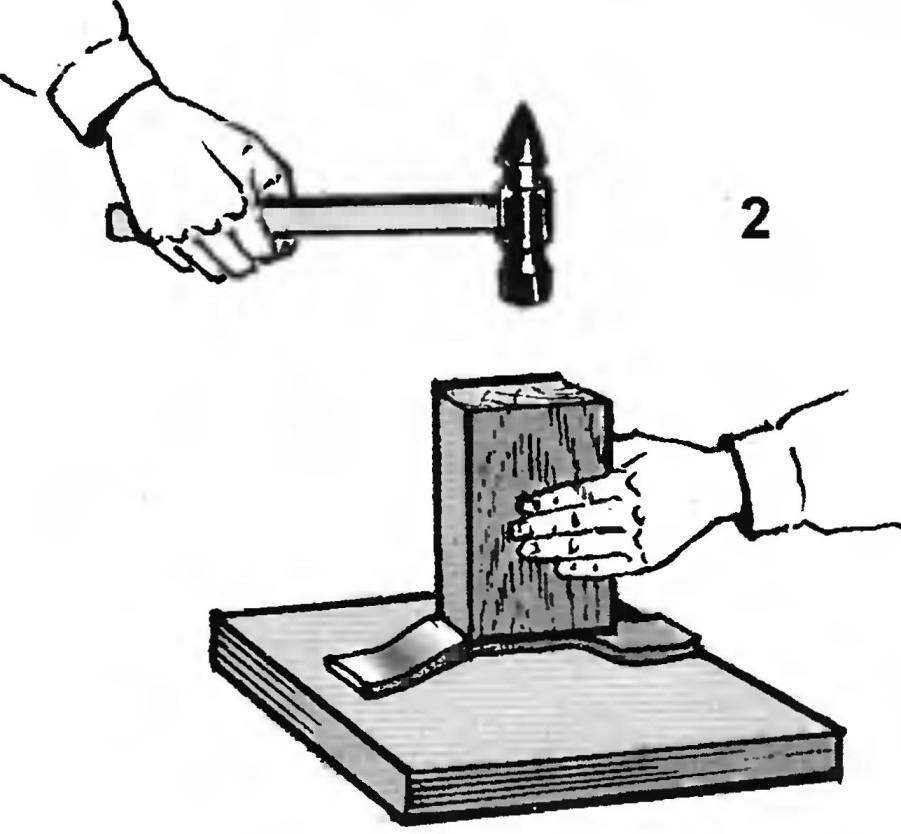 If you have multiple bulges, first straighten extreme of them, and then the middle. On the surface strips of soft material had no traces of hammer blows on them is applied using a wooden block (Fig.2).
The most complex and critical edit of the wide sheet metal, particularly if its surface has several bumps, or one, but located in the middle. In this case, it is impossible to strike directly at the bumps, as it not only does not decrease but rather increase. Therefore, before you edit the sheet it thoroughly inspected and encircle the border of a convex space with a pencil or chalk. The preform is then placed on the correct Board (Fig.H) and holding the sheet with his left hand (in-glove), right strikes with a hammer first on the edges of the sheet, and then, weakening the force of the blow, gradually approaching the center of the bulge.
The workpiece having a flat middle, but wavy edges, ruled, striking from the middle towards the edges. During this operation the sheet from time to time inverted and with light hammer blows gradually restore the straightness of the surface. 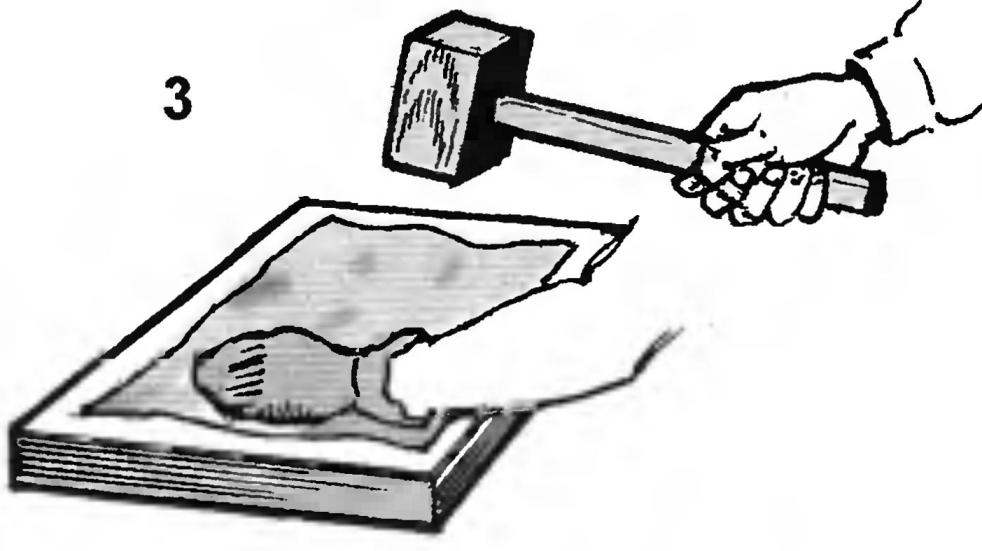 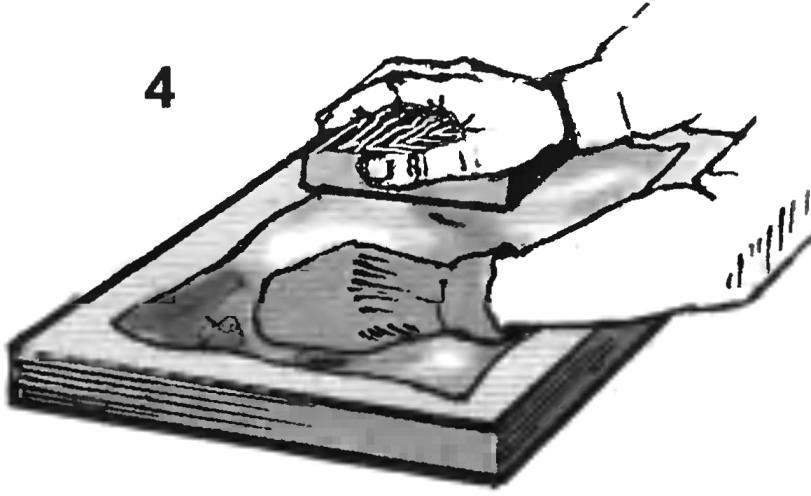 Sheets of soft non-ferrous metal — aluminum, copper, brass — with editing you can cover a piece of cardboard so that the surface does not remain traces from blows by a hammer or mallet. Thin sheets with a thickness 0.5 — 1 mm, rule wooden or brass (aluminum) with a hammer, and the leaves are more thin, put on a flat plate and leveled with a trowel — a flat wooden or metal bar (Fig.4).
Wire (but not insulated wire) often straighten the lug. If the wire diameter exceeds 0.5 mm, to straighten it enough to stretch, much pulling around a wooden rod, clamped in a table vise (Fig.5). Wire with a diameter of 0.5 — 2 mm are placed between the sandwiched wooden bars (Fig.6) and last one or two times.
Steel wire with diameter more than 2 mm, as well as bar metal, ruled on the anvil with a hammer or mallet.
The metal tube is aligned also on the plate. If the tube is made of soft metal or have thin walls, this work must be very careful not to mash even more. During operation, the uneven detail you need to uniformly rotate around the longitudinal axis. If the tube on one side has a dent that needs to be addressed, it is put on steel rod of suitable diameter, and, using it as a prop, hammer straighten wrinkled place. 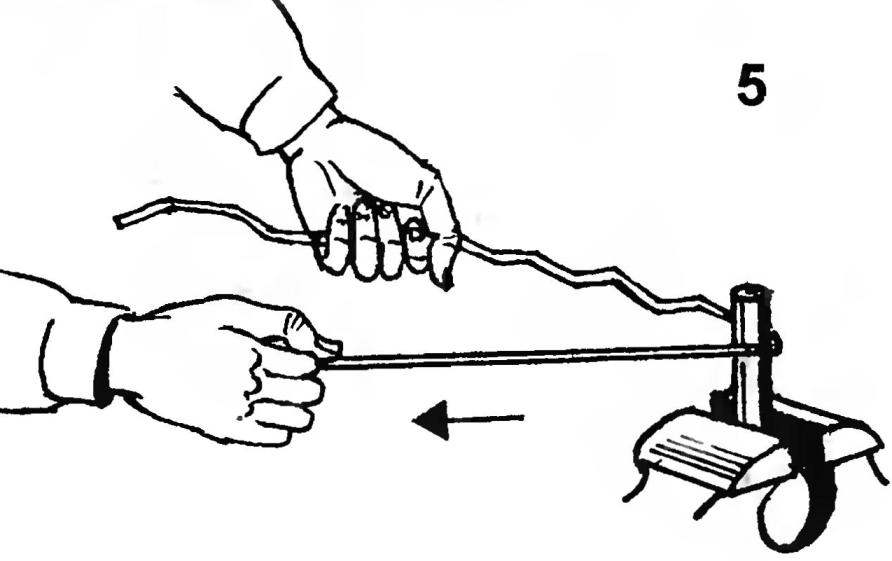 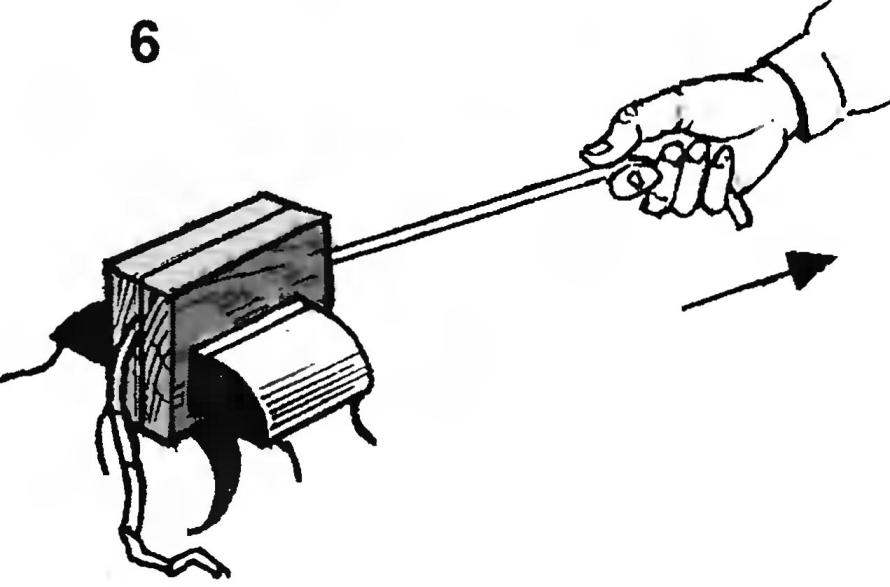 If the ends of the thin tube sealed, and the above technique fails to apply, it is possible to do otherwise. In the tube wall, opposite the dents, drill a hole through it and a steel pin with a rounded end line the crumpled place. The hole is then sealed by soldering.
Profiled metal (angles, channels, tees, beams) and thick sheet steel is ruled by the hot curved space (bumps) to a cherry-red color; the surrounding areas of the metal when it is cooled with a wet cloth so they retain their original form.
IVANOV