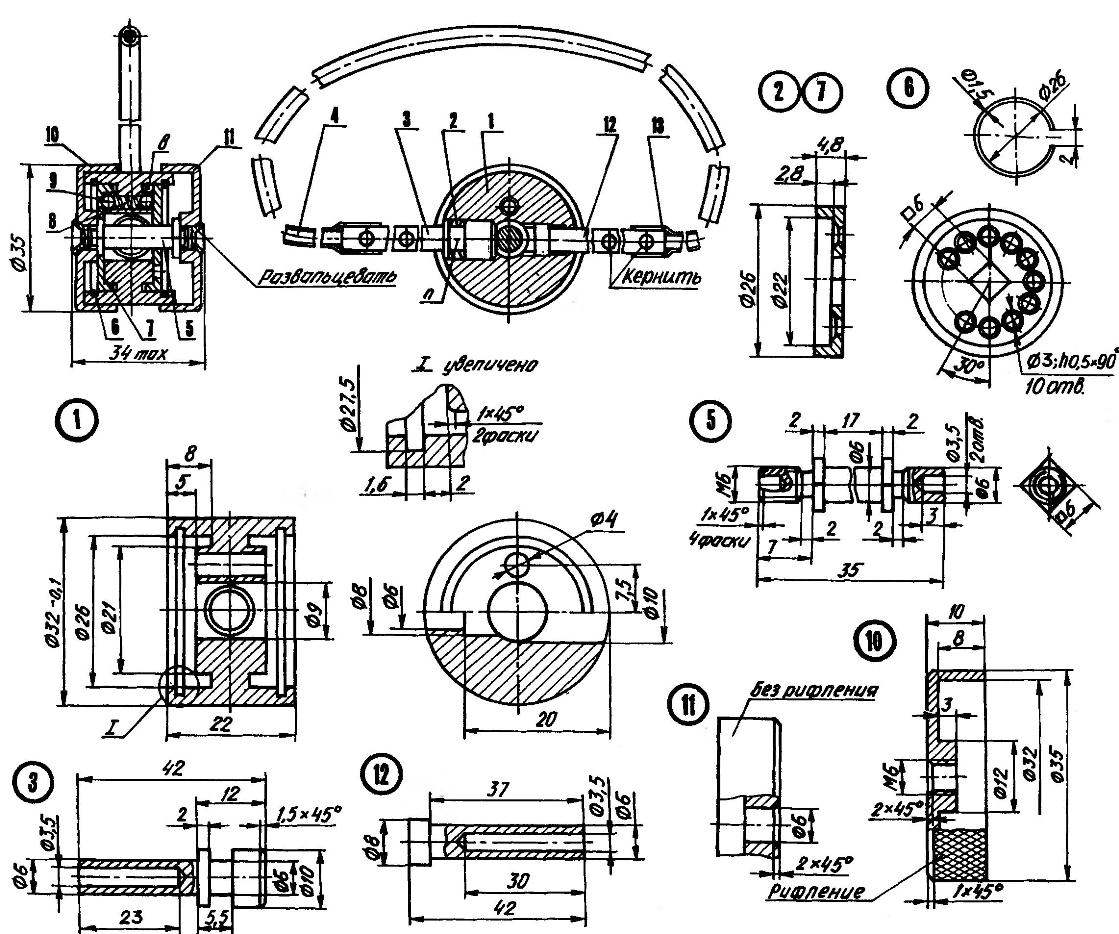 Combination bike lock:
1 — housing; 2 — back plate; 3 — left (lockable) tip; 4 — throttle cable (d3, L800); 5 — roller; 6 — retaining ring (2); 7 — front plate; 8 — spring; 9 — ball (2 PCs); 10 — front drum; 11 rear drum; 12 — right (fixed) tip; 13 — the case of the cable (sleeve)
To screw on the front roller drum. Insert the roller into the housing and inserting it alternately into engagement with both teralani, test free are its square flanges into the holes in tarlach in the four possible positions of engagement. If you need to customized to free, without jamming, connections,.
Remove the cushion and finally screw on front drum to capacity (interference) be careful not to bend anything, flared threaded end.
Reinsert the platen into the housing (in design position), put back the drum to stop and the flared end of the cushion.
Now you can define a lock code, enter the front drum engaged with one of tarela and rotate it to pause in the clicks. Then continue to rotate the plate, counting the clicks to align the cutout in the Board that-reli-with a hole under the left tip in the housing. The number of clicks and will be a source of this plate in the direction of rotation. The same is done with another plate.
In order to close the lock, it is necessary to bring the plate to the open position, insert the left tip into the lock body until it stops and hold it in this position, a slight axial force while turning to enter the front roller into engagement with one of tarela. On joining engage, evidenced by the abrupt “disappearance” of the drum in the direction of the axial force on the thickness of the wall plate. Rotate the drum to pause in the clicks. To improve the secrecy turn to pause in the clicks and the second plate by the engagement with her front drum its axial displacement relative to the housing, but in the other direction. Then put the drum in the neutral position (no gear with teralani).
For unlocking the lock must be counted the clicks to install both the plate code, and bring the front roller to the neutral position.
I. YANKIN, Baykonur, Kazakhstan