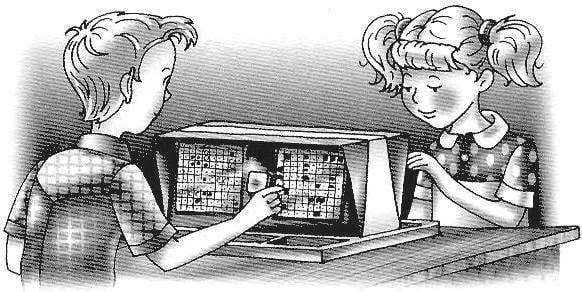 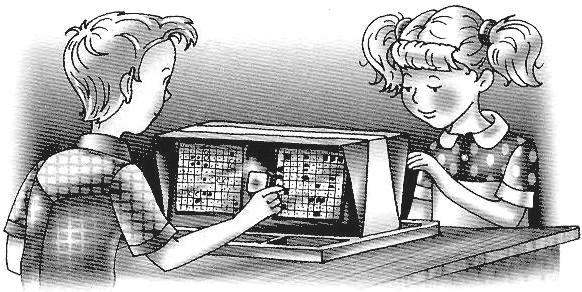 “Battleship”… Who do not know this simple yet exciting game! Polished by many generations of pupils, it reached perfection and it has only one drawback — “shots” of the battle are easily detected in the classroom, as opponents and then whisper: “D4!” — “Choke!” “E5!” — “Hit!”… If the teacher hears the losers are both the enemy.
Of course, this is just a joke. However, is it possible to improve this old game so that it was inaudible to outsiders?
For a start, remember its basic rules. Before each of the opponents is a sheet of paper on which are drawn two the playing field, divided into squares with letters adjacent to each row from the top and digital — on the side. Each of the players two of them: on one secretly arranges their ships on the other represent “shots” at the enemy.
The legend is as follows: four vertically or horizontally shaded cells are “battleship”, three “cruiser”, two “submarine” and “torpedo boat”. Rules of the game is allowed to have in each fleet, one “battleship, two cruisers, three submarines and four torpedo boats”. The process of the game is to “attack” the field of the enemy on coordinate system: playing alternately call letter (horizontal) and number (vertical) fields of the enemy, and the partner reports: “Choke!” “Hit!” or “Sunk!” (if “shot” last cell vehicle). And in contact with the gunman gets the right to another shot.
Exactly the same rules to play “sea battle” on the proposed simple slot machine (Fig.1). It is a device on the opposite sides of which are equal panels, divided into two playing fields with squares, as in the classic game. In each square there is at the hole in the drawers of the unit base — stock special red and black chips with metal legs, the diameter of which corresponds to the holes in the squares of the playing fields. 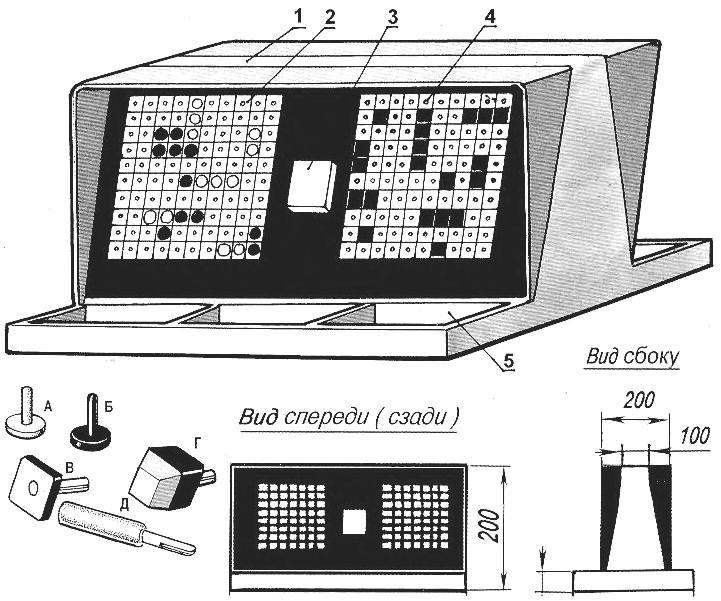 Fig. 1. The slot machine “battleship”:
1 — body; 2 — control Board; 3 — pilot lamp; 4 Board game; 5 — trays for chips.
Bottom kit, game: A and B — chips of red and black color to register hits and misses; V — chip with metal leg — element “ship”; G illuminated chip; D — probe
Partners sit opposite each other in front of the camera. Each of them has the right Board is the area where the player has its own fleet, and the left — control, is intended to conduct and adjustment of fire.
“Ships” is collected from the chips, the metal leg which is inserted into the hole of the corresponding square. After their placement on the right-wing boards one of the partners makes a shot using the probe insert it into one of the holes left of the control Board (the stem is the same as that of the chips). If the location on the opposite field from the enemy is a ship that lights a warning light on the front: so the shot hit the target and the player is entitled to a prize next turn. If the lamp is not lit slip; the right of the shot passes to the opponent.
To control your hits and misses also serve chips of two colors — red and black. Red are inserted into the holes of the Board, immediately after the shot, where it was hit, black — in place of misses. The game is up until one of the partners will not be sunk by his entire fleet.
The gaming machine allows us to complicate the traditional rules of the “sea battle”. The ease of preparation of the ships of the chips allows you to quickly rearrange them during attack: to carry out the maneuvering of ships, to take them from the fire.

Fig. 3. Illuminated chip (A) and insert it on the Board (B):
1 — lamp (2.5 V); 2 — cap (plexiglass); 3 — wire connection; 4 — base (plexiglass); 5 — metal case; 6 — tube (PVC); 7 — leg
Now, briefly on the structure of the apparatus. His Board control and game metal, preferably made of aluminum with a thickness of 2 — 3 mm. Board size — 150×150 mm Each of the four boards rascherchivanija a hundred cells — the easiest way to do the cutter from the saw blade. In the center of each cell is drilled a hole with a diameter of 4 mm.
Even for a gaming machine will require four contact boards. Cut, they must be of insulating material, for example of the PCB. Out of every one hundred mounted pin sockets — tubular rivets with internal diameter of 4 mm. Before assembling the mounting placed under each petal. Both tab — and the Metal contact is installed in the machine casing so that between them a gap 3 to 4 mm, and the holes in both are coaxial. The easiest way to carry out joint by drilling holes package them all cards.
The wiring is simple. You should only carefully connected mounting petals of the playing field of the first partner with the relevant parts of the control field of the second partner and the mounting petals of the control field of the first partner with the relevant parts of the playing field to his opponent. For example, A-1 on the control panel A-1 panel games, etc. the principle of the connection boards shown in figure 2.

To fight on this slot machine is very exciting. However, over time, there is a desire to improve it. After all, once fired and struck the enemy ship, almost exclusively attacking partner clear, what are the coordinates of the wrecked ship, because this hole is inserted the probe. And his opponent knows only that one of his ships struck, but what? You have to shoot the old-fashioned way to inform the partner that the signal light was observed entering the square this.
To achieve clarity on both sides is easy — you just have to replace the tiles depicting ships, a warning light (Fig.3) is the game in this case will be fully automated. Now when you hit the corresponding vehicle (or its part) will break out, giving the signal that the hit was exactly in this boat.
I. SERGEEV