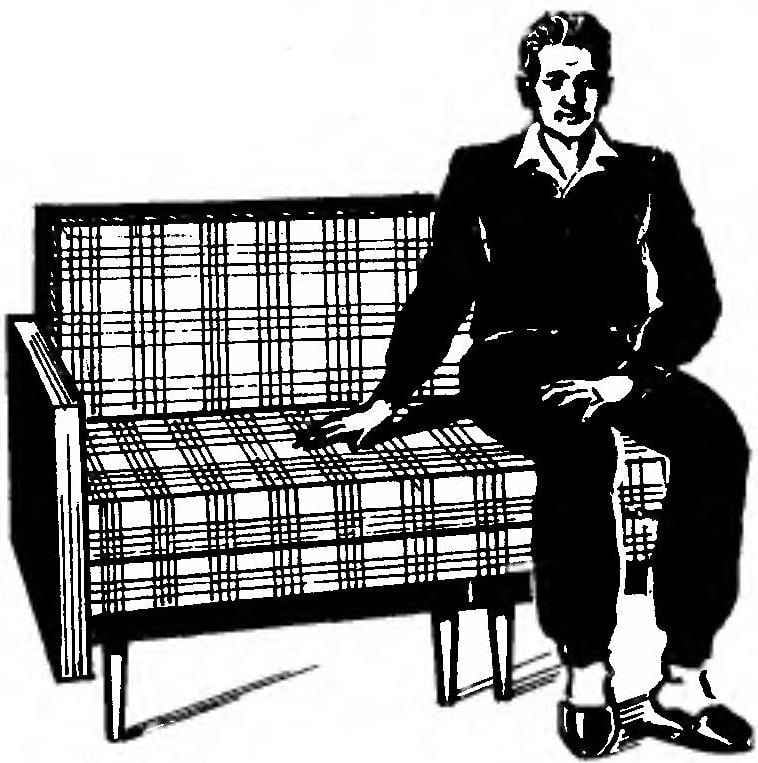 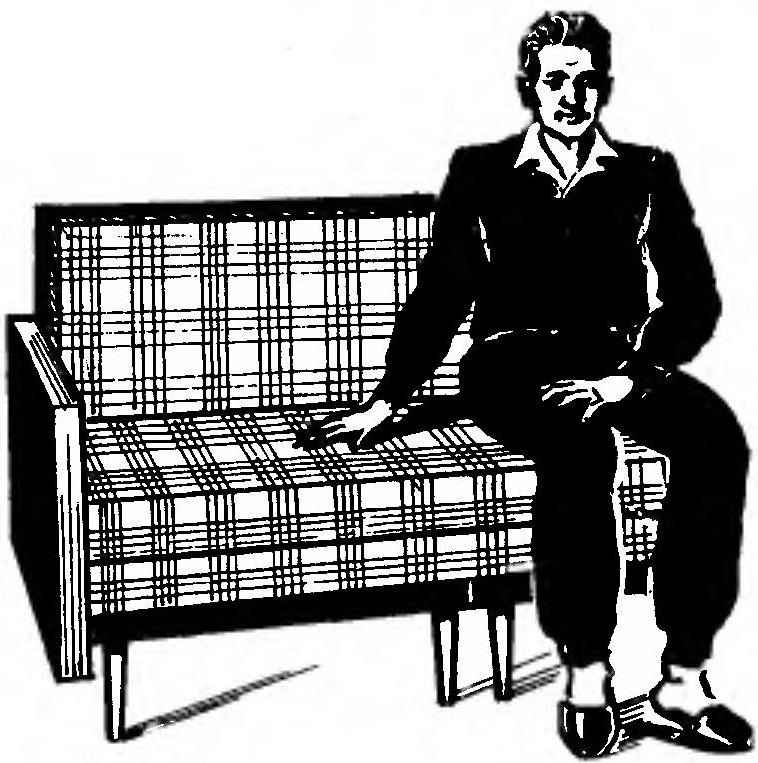 Usually furniture buy identical pairs. For example, two sliding chairs, beds. Over time, they grow obsolete, become an anachronism. Throw them away, but to alter… such chairs, released the same factory overall and mounting dimensions are the same. Because of this, after the dismantling of the side panel (legs) on each product it is possible to join the chairs into a sofa, and even his diagram of the folding-unfolding is unchanged.

Sequence alterations following. Remove the back pillows and sides, leaving intact the extreme. There is an opportunity to connect the base of the chairs together the holes of the mounting taken sides, using the same bolts. In such a modular structure of transverse bars work is composed of two halves. Therefore, in those places where dismantled supports (legs or joints), need reinforcement bars to ensure strength and rigidity of the frames.

The refurbishment of the chairs in the sofa demanded the following slight modifications. Two back slats, fastened to the sidewalls and which was the focus of the back in the assembled position, the replacement pipe with brackets. Pipe length determined by the distance between the sidewalls. Next, we dismantle the mechanisms of unfolding, which will be in the middle of the future grounds of pillows. The left and right of the base of the first pillow put into place in the hinges. Align the gap between them using clamps; using a stand, connect them, kleiv epoxy three wooden lintels. The gap formed between the sheets of plywood to seal the plywood strip (on the material is one of the two unclaimed former side). Additionally, to increase strength and rigidity, combine the previous transverse bars steel corners 60x30x2 mm length 350 mm, fixing them flush with the sides of the plywood three-millimeter screws. 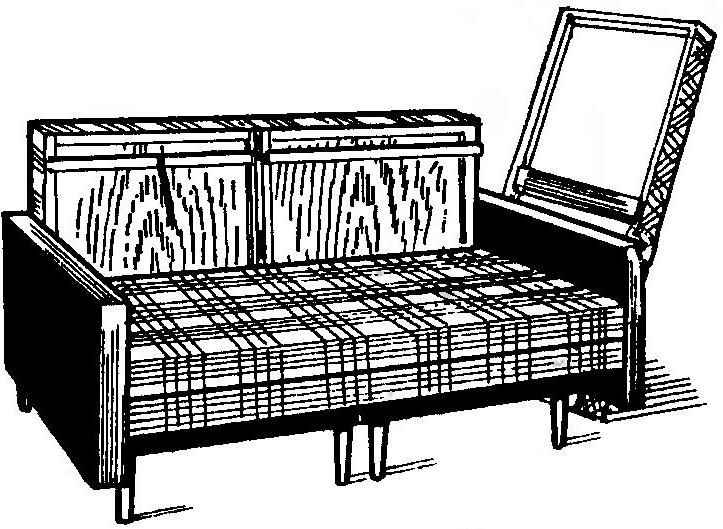 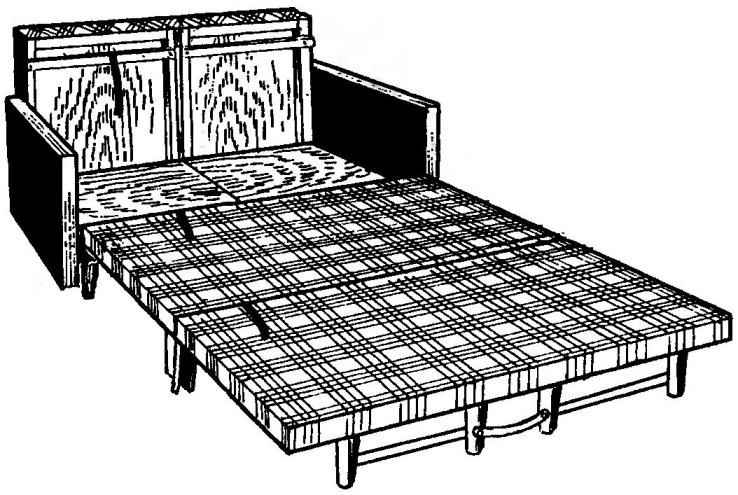 Push the base of the sofa and unfolded seat cushion 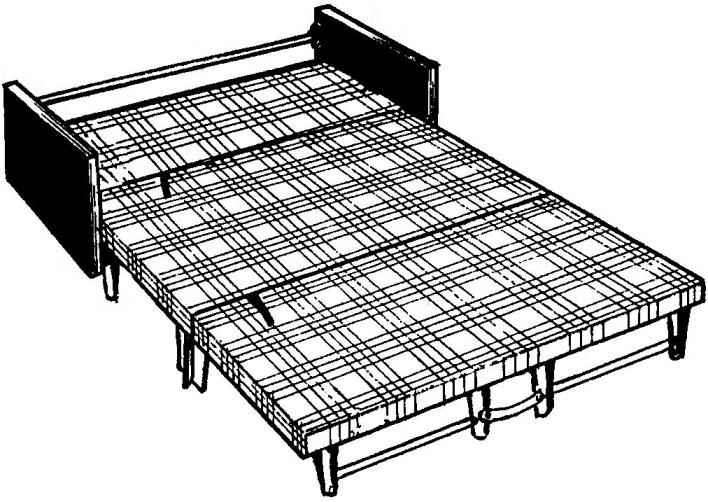 Lowered the rear back cushion: position the bed

The sequence of connection of the bases of the second cushions is similar to the first, except the corners, which are put on the bottom the full width. Similarly buy and third grounds of pillows. Previously to the corners between the second and third combined basis set, stepping inside of the longitudinal bars, the door hinges as the hinges (both left and right to prevent separation). The third ground is measured on the second.

Preparing the grounds, proceed to the actual pillow. Before upholstery swivel remove. Glue on the base of the pillows 50-mm foam, the blend additionally thin batting and put on the covers; turn, slightly pull the edges and glue (glue 88). Once the cushions are ready, mount back all the joints, legs and finally collect the sofa.

Support of the backrest (A — bracket, B — pillar): 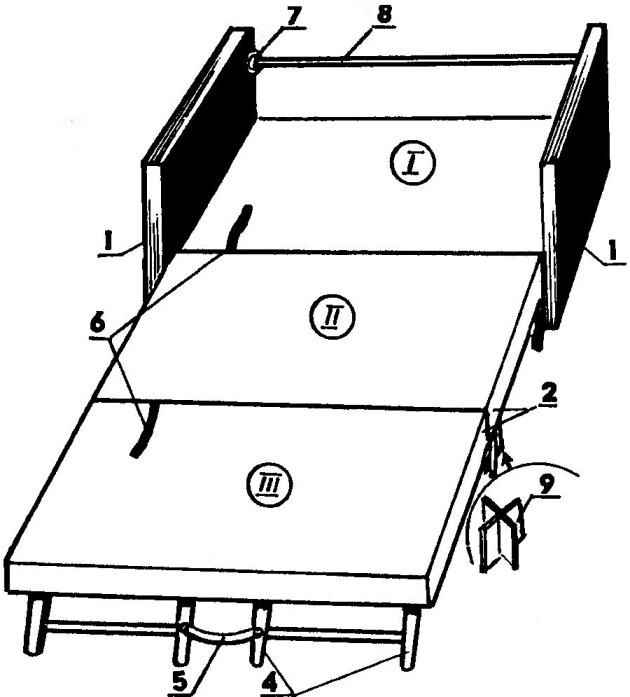 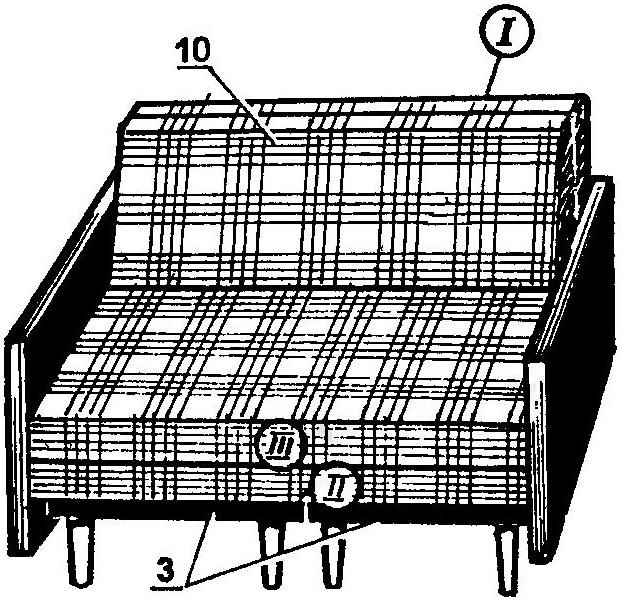 Halves removable backrest fastened steel plates with thickness of 1.2 mm on the screws; in addition, the insert inside the wooden lintel.

Not studding the back, test fit in place. If necessary equal the top of the first pillow.

Finally I will say — the result is worthy of attention. With modified form, with fresh upholstery combo sofa looks new and acquires different properties.