There just are not invented contraptions to the front door had closed by itself. This special spring hinges, and cargo the device with counterweights and a pulley system, and various spring or rubber band. There are commercially available, but, unfortunately, they are not without drawbacks: some are too complicated and quite expensive, others are inconvenient to use or unreliable, easily damaged. Therefore, home designers continue on their own to solve these problems, as evidenced by the proposed content selection submitted by readers. In the winter the doors of the entrances of our homes are often left open. This leads to overconsumption of energy required for heating staircases. To save precious heat needed simple automation.
CLOSE… LOAD
However, you can do without mechanical devices, providing a small tilt of the entire door frame. The main drawback — the impact of the door on the box — easy to remove, making the strips thick rubber on the vertical part of the door frame.

Fig. 1. The spring mechanism the door is closing:
1 — rubber isolator, 2 — door, 3 — spring.
To ensure a tight seal using the device with a load connected to Derio with the help of a rope passing through the block. Depending on the installation location of the last return time will either increase or decrease. To limit the angular velocity of the door when closing the cargo is placed in a vertical cylinder filled by a liquid, preferably mineral oil. Under the weight of the load will fall in a viscous medium, which will limit its speed and, accordingly, the angular velocity of the door movement. The gap between the tube wall and the cylindrical surface of the load should be no more than 1 mm. 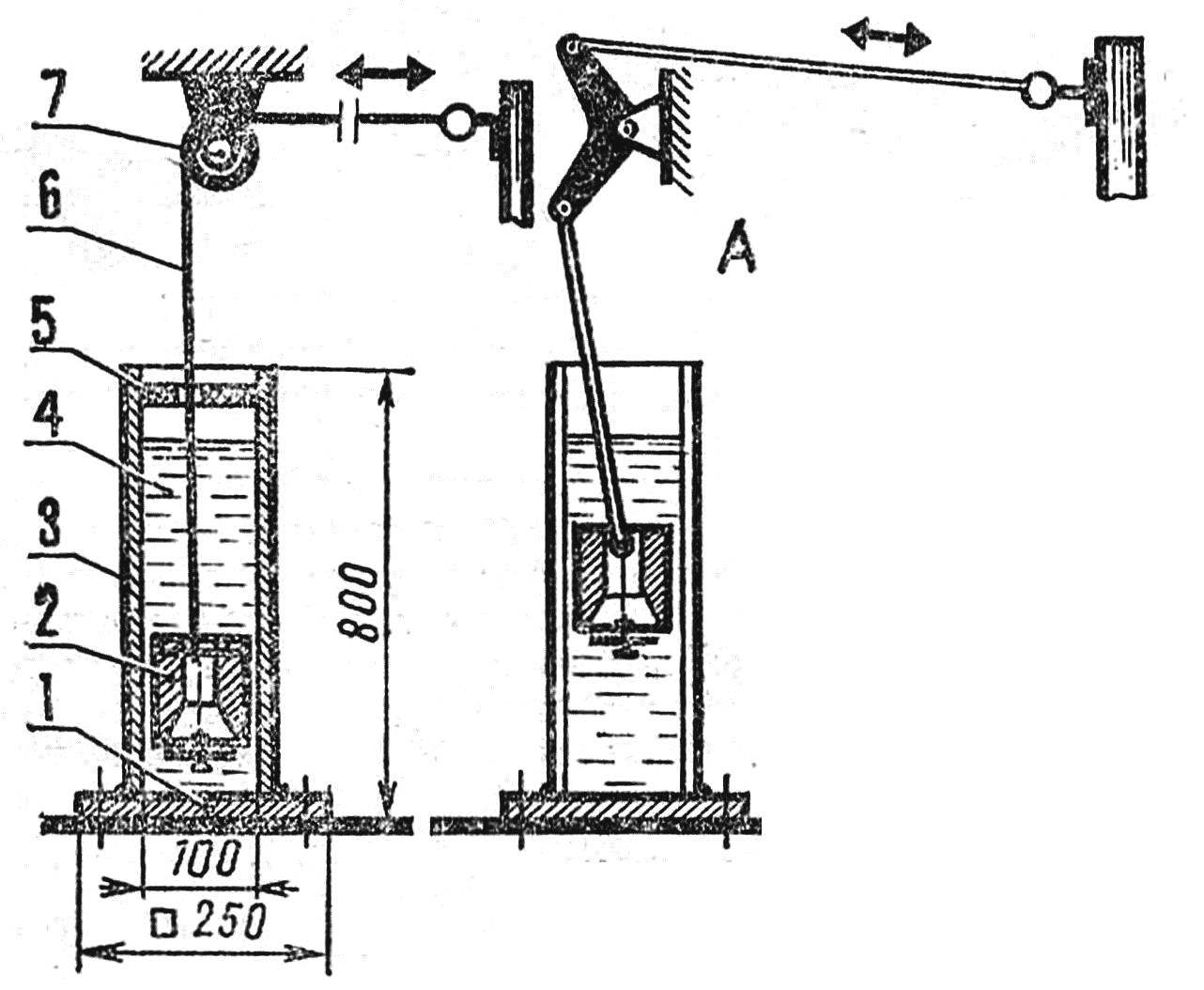 Fig. 2. The closing mechanism of the door with the help of cargo:
1 — base plate, 2 — piston load, 3 — body, 4 — mineral oil 5– cap, 6 — tro Sik, 7 — unit; A — the variant of the device with rigid rods.
The design of the load has some features. That when we open he quickly moved up, it is necessary to provide free flow of fluid through a fairly wide channel along the axis of the piston. In its lower part is mounted Poppet valve locking channel. If the lowering speed of the load low, between the seat and valve need to put a thin washer of 0.3—0.5 mm.
In the upper part of the load perpendicular to the axis of movement of the inserted steel rod 0 6 mm for cable mounting, passing then through the block and fasten in the upper part of the door away from the hinges. And the more offset, the less cargo weight, but the height of the cylinder more, increasing the movement of goods. 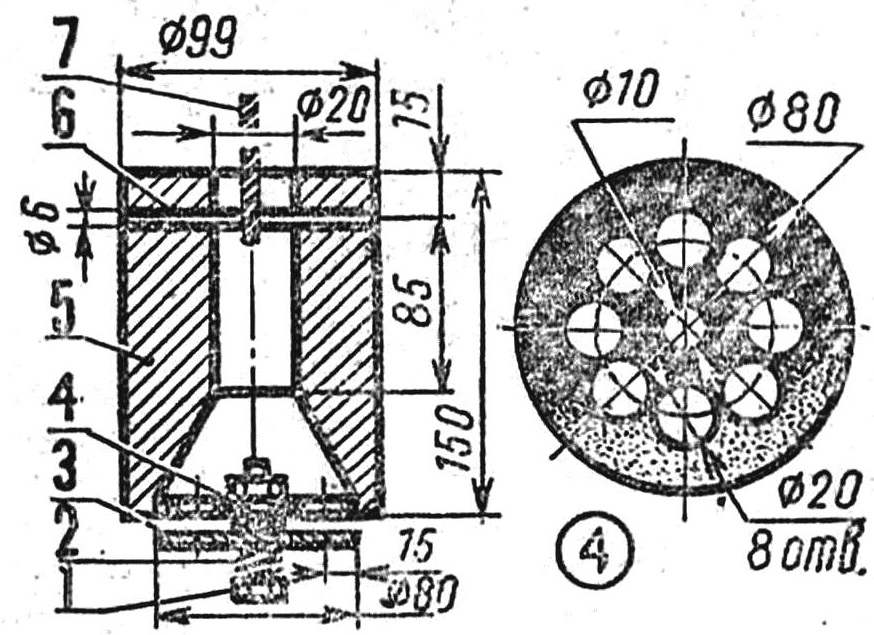 Fig. 3. The piston-load:
1 — bolt M10. 2 — spring 3 — plate 4 — plate 5 holes — the case of cargo, 6 — steel rod, 7 — wire.
In the tested device, the diameter of the cargo was 99 mm, height 150 mm, weight — 5 kg, diameter of roller is 60 mm, the offset of the cable attachment ia of the door from the hinges 200 mm. the Load is turned on a lathe from steel.
Cylinder steel pipe with an inner diameter of 100 mm, a height of 792 mm, the lower end of its welded steel plate 250x250x8 mm serving as a base of the device. The top opening of the cylinder is closed by a plastic lid with a hole through which a cable runs.
For reducing metal cylinder can be manufactured from asbestos-cementno pipe, and the weight of cast concrete. 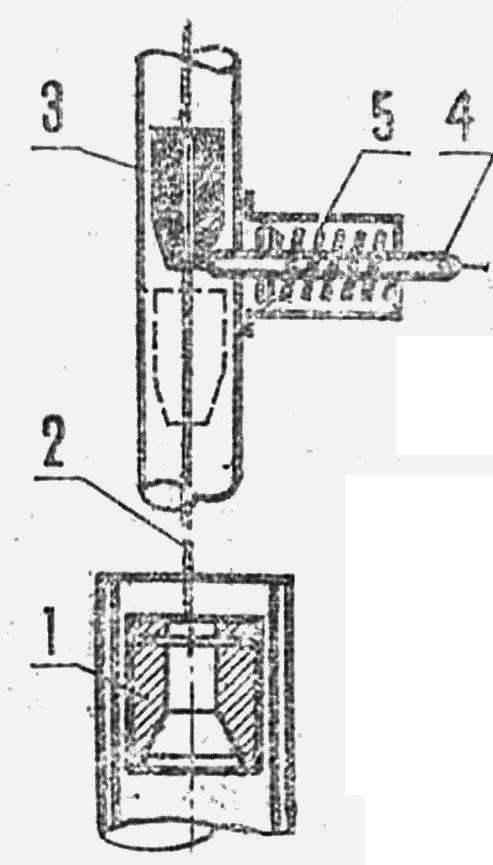 P and S. 4. Lock for door:
1 — load. 2 — wire, 3 — stopper, 4-retainer 5 — spring
The device is to provide a latch, which excludes the passage of casual visitors. On the vertical section of the cable is fixed a cylindrical coupling, one end of which has a cone shape. The cable from the clutch moves in the tube with a side opening; includes spring-loaded rod of the locking mechanism with the cable for its removal.
Unlike constructions with rigid rods, which should be near the door, a device with a cable pull can be set, for example, behind the wall in the Elevator shaft that will eliminate the possibility of damage.
N. BEZBORODOV, Dolgoprudny
THE CABLE SPRING
The return spring is fixed on the front door, has a number of inconveniences: when closing the door much pop, and the opener requires a lot of effort.
Offer a device that is devoid of these deficiencies and structurally very simple. For its production will need a section of steel cable ø 10 mm and a length of 800 mm and two of the clamp is cut from sheet metal with a thickness of 1 mm. 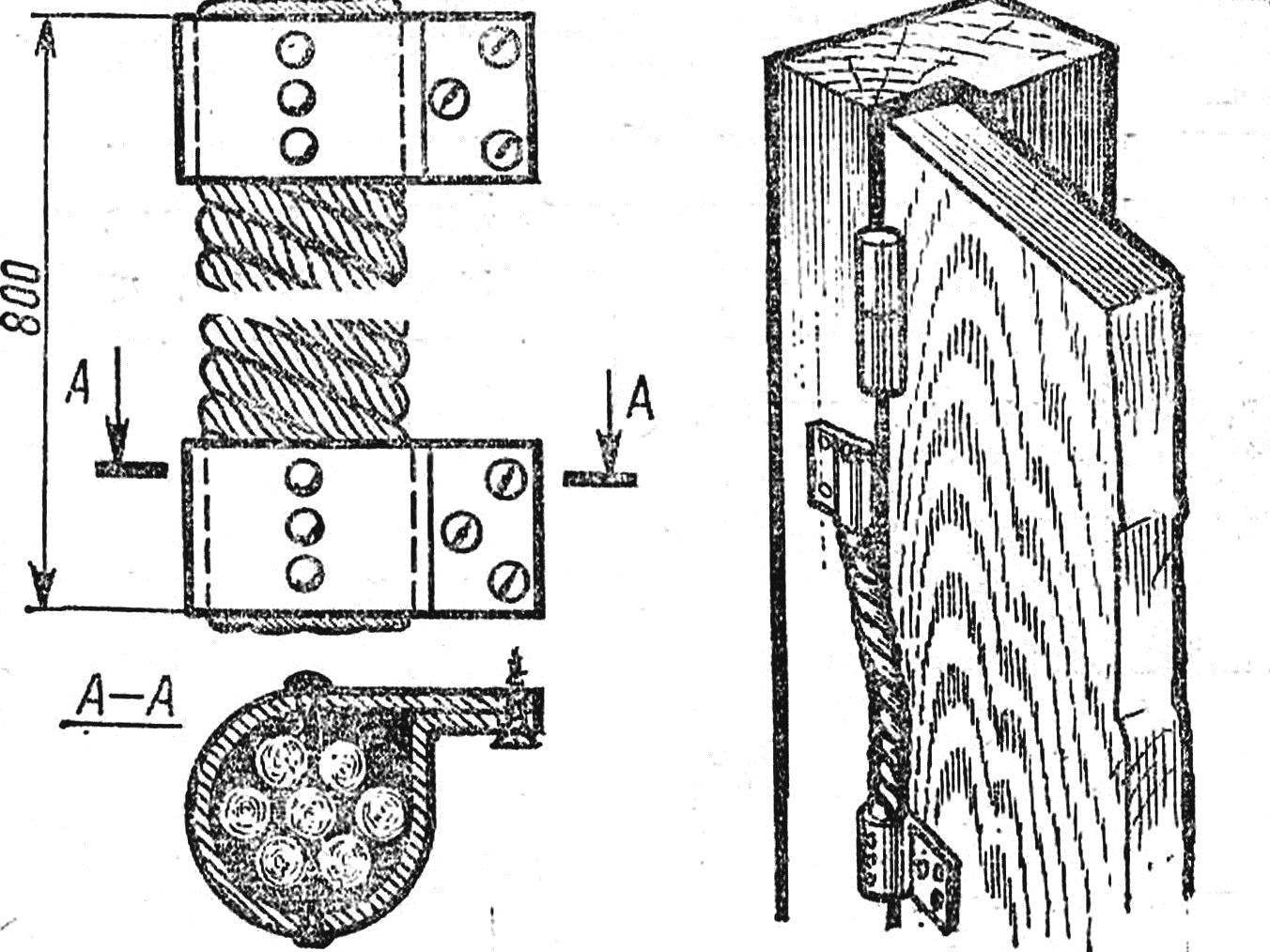 The ends of the cable inserted into the clamps and fix with nails through pre-drilled holes. Projecting from the opposite side end of the nail to clench or just folded.
Before installing the device, it is necessary to carefully adjust the door so it is easily included in the box. Fixture Bank, near the door hinges. The upper clamp and three screws are screwed to the vertical upright of the door frame, and the lower one to the plane door. First make one turn of the rope in the direction of opening the door. If the force is insufficient, will turn the screws and do one more rotation, then tighten the lower clamp in the same place.
Made in this way “machines” for doors we serve for over thirty years without repair.
V. KUVALDIN, p T to C o in on, Leningrad region
SHOCK ABSORBER FOR DOOR
Do not rush to throw away old car air pump. It is possible to make great shock absorbers for slamming doors.

Door damper:
1 — bracket, 2 clamp, 3 — plug, 4 — cylinder, 5 — cuff. 6 — spring, 7 — cover, 8 — lug, 9 — area, 10 — d hole 1-2 mm.
For this it is necessary to cut off the lower part of the cylinder, remove the handle and install in its place the eye. If required, the old, the worn, the cuff should be replaced with new, wearing beforehand on the stock spring. In the trimmed end of the cylinder insert the rubber cover and fix it with a nail. To the air outlet in the cylinder, drill a small hole of 1-2 mm. d cut sistemako material bracket, yoke and area, and then to collect design and install it as shown in the figure. The door returns to its closed position under the influence of spring, and the air that serves as a shock absorber, gradually goes through the hole with a hissing sound.
The device is reliable in operation; it has been two years in our house I can not hear the slamming of the front door.
S. Sydow,Karaganda
INSTEAD OF THE SPRING – GRAVITY
Device for closing doors all complicated: hydraulic, pneumatic, electric. Airports got even the electronic machines which not only close the door for the passenger, but also helpful to open it in front of him.
And the simple design “derevoobrabotka” contains no additional details. The fact that they have the weight of the sash. Just the axis of its rotation is inclined. 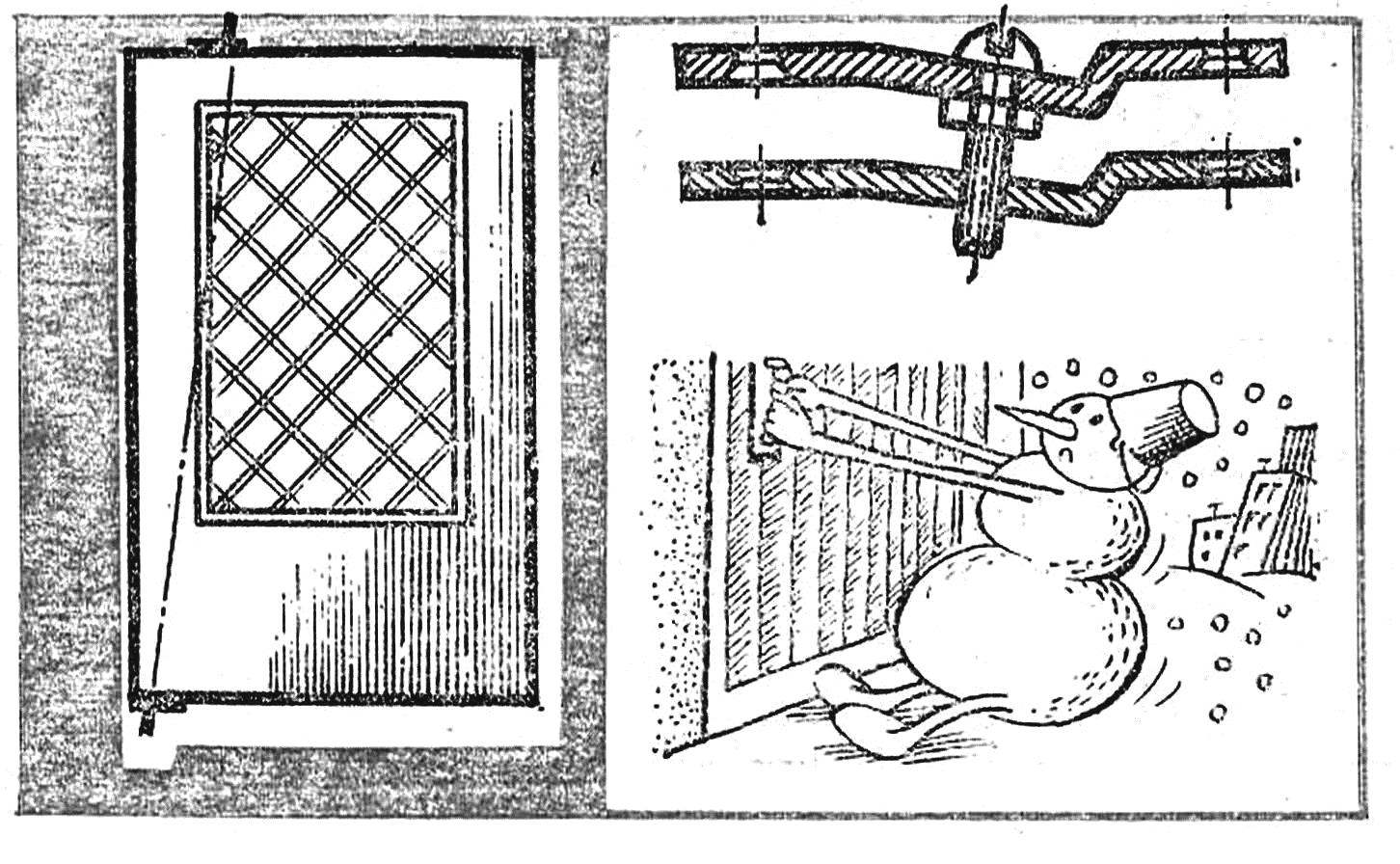 Such a door can be done in the stairwell, and in an ordinary apartment. More convenient if it will open and close equally well in both directions. Loop — from steel strips with a thickness of 3-4 mm and screw thread of 8-10 mm mate — the same plate with the screw holes.
I. GALINSKY
THE LOOP WITH THE SECRET
If you want the door closed itself, do not have to purchase a mechanical device, it is possible to do otherwise. In the conventional door hinge instead of standard cylindrical washer (when installing the doors, incidentally, are often discarded) place wedge ring (see figure). Secure them with the tabs included in the symmetrical grooves in the tubing loops. The angles of the bevels of the rings must be in the range of 10-15° which is enough to keep the door under its own weight returned to its original position.
The dimensions of the ring determine the diameter of the tubes and the axis of the hinges and skew angle. Since in the assembled state the height of the wedge rings will be somewhat greater than the height of regular cylindrical washers, hinges slightly shifted relative to each other, but it will not affect their ka performance. 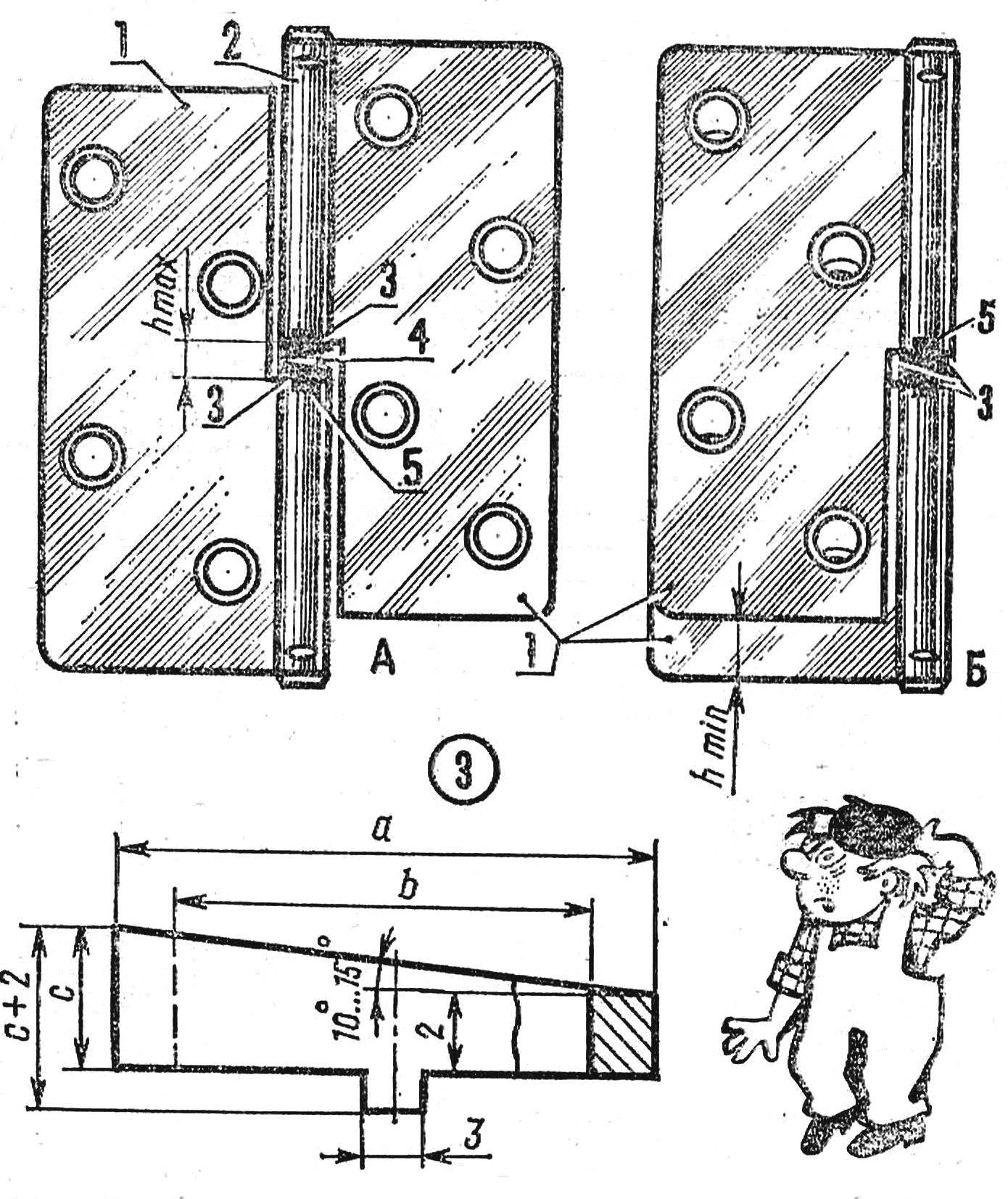 Self-closing door hinge (A in open, B — closed position):
1 — loop, 2 — tube, 3 — wedge ring, 4 — axis, 5 — symmetrical grooves on the supporting surfaces of the tubes. (Sizes a, b and C selected on the basis of the size of a standard loop.)
The resulting device operates on the principle of the effect of sliding on an inclined plane with a specified angle. When the door is opened one card loop with the tube and the upper wedge ring expands and simultaneously slides along niguna wedge-shaped ring. The door is therefore lifted. Then iodine by its own weight it tends to return to its original position, turns and closes; the gap between the tubes of the loop decreases to a minimum.
This design, besides the ease of manufacture and operation, distinguished by the fact that if the need no-closing wedge ring can be easily removed and installed cylindrical bushing, door hinge becomes the usual.
C. CUTTINGS
INVISIBLE AXIS

Sometimes a small card loop set in an open position, for example, at the gate of garden, doors of built-in cabinets or closets. In this case, a spring for closing a door can be built directly into the hinge. It is necessary to disassemble the loop: remove the axle and shorten the bushing on the spring size, which then during Assembly put on the axle. The ends of torsion springs fitted on the front side of the card loop. If one spring fail, it is possible to install additional, rastoci another Bush.
According to the magazine “Melody techniques”, pnrm.