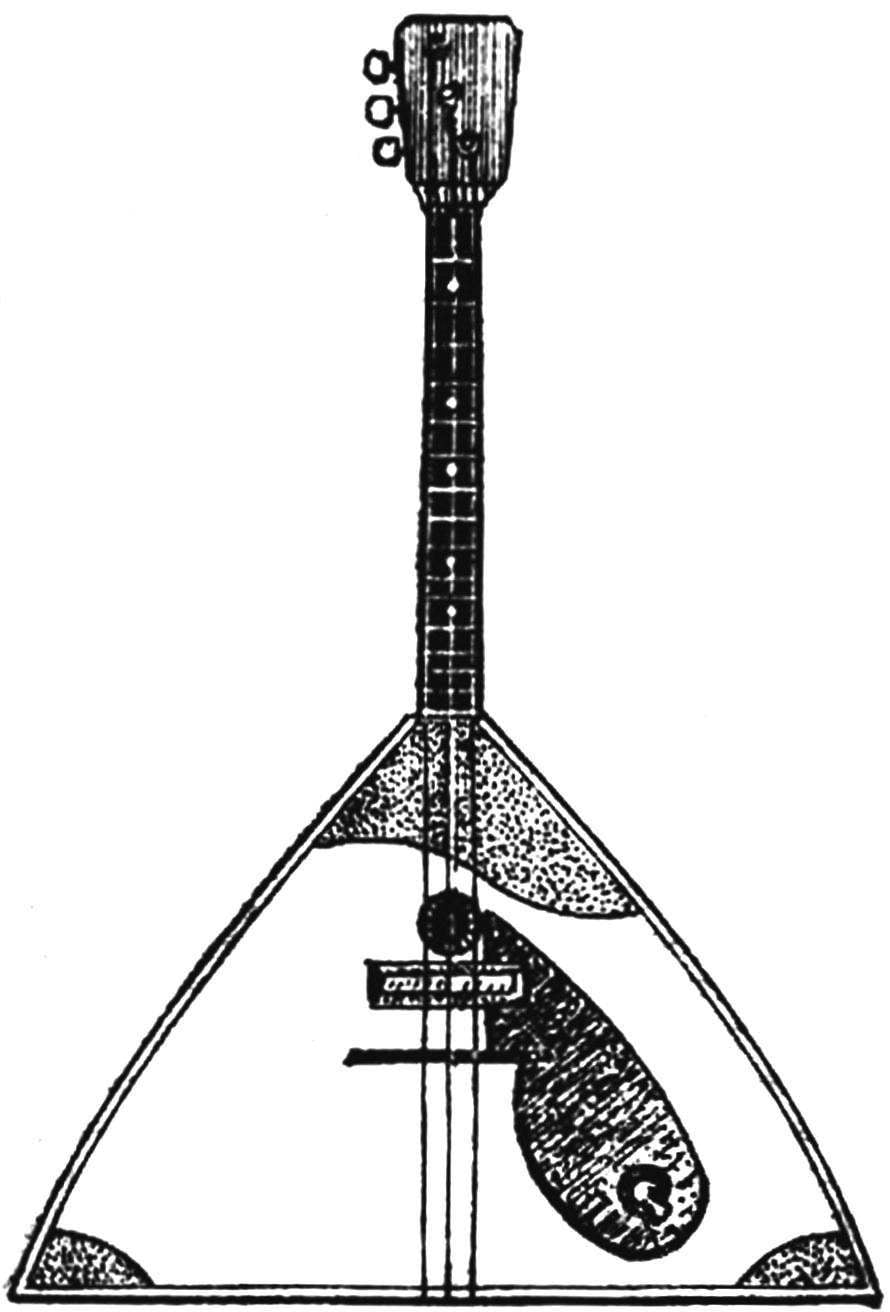 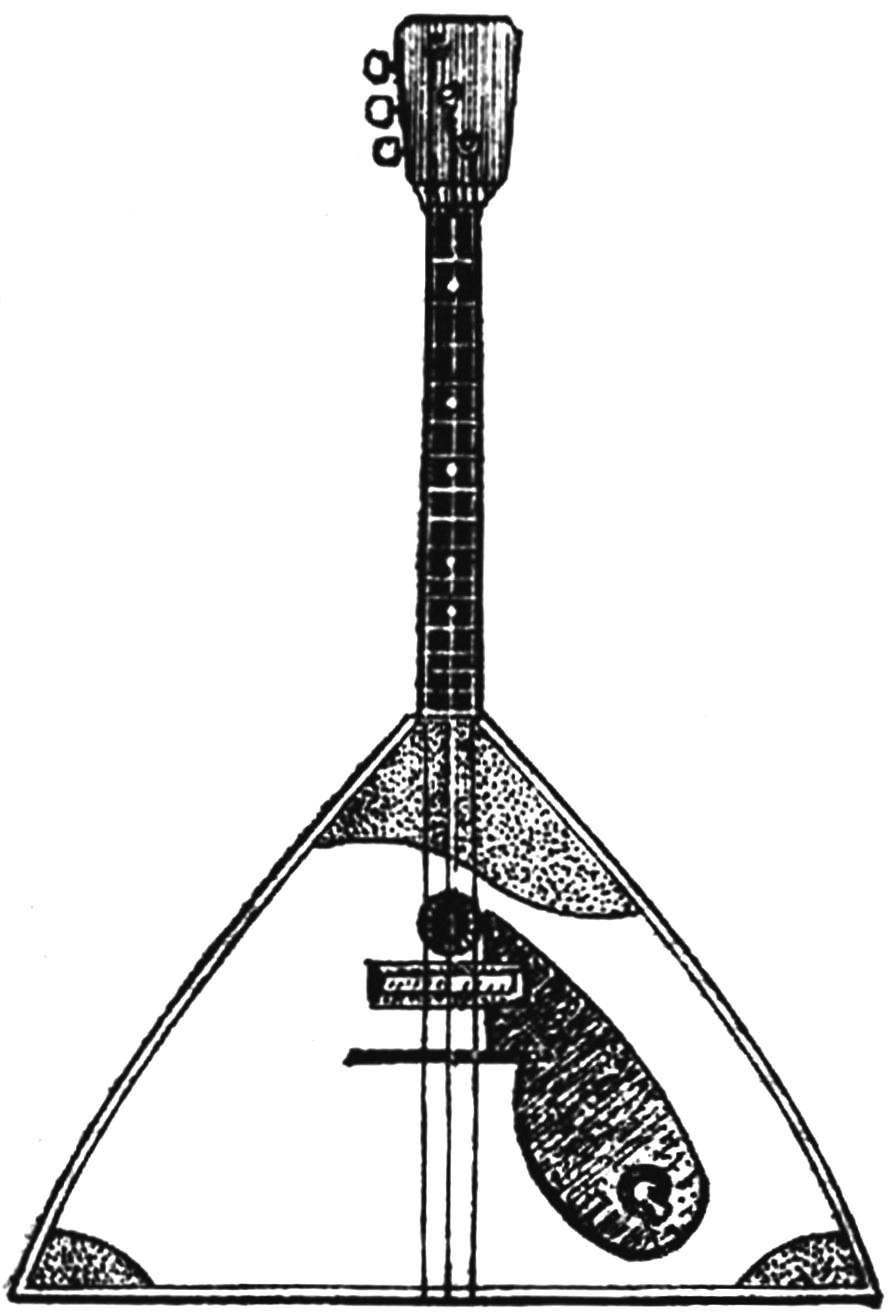 We have long been accustomed to the prefix “electro” in modern musical terminology. Appeared such names as electric guitar, electro, and even the ensemble of electronic musical instruments. Many of the tools have become more rich shades of sound, when a duet with them stands electronics. Bypassing it is only people’s tools. Plays a role, apparently, the fear to violate the purity of the already established sounds. But this is not so. Even such a simple instrument like a balalaika, will be able to gain more power, become a true soloist of the orchestra of folk instruments, if you supply the pickups. Today’s publication is devoted to one of the variants of the “electrification” of the balalaika.

The tool, which will be made on the basis of conventional balalaika length scale (distance from nut to top of stand) 438 mm (± 5 mm) and a total height of stand 13 mm (Fig. 1).
An important part of electrobalance — the pickup (Fig. 2). The quality of fabrication depends largely on the tool. The core of the adapter is made up of several permanent magnets electric motors for toys. The magnets will be turned on a sanding disc. They can be made from a file or a magnetic ring ion trap tubes previous releases.
File release handle on the abrasive wheel to the desired size, hardened, and finally magnetized. In the second case the ring through the cardboard sheets are crushed in the vise, and the shards to grind abrasive circle. Break the ring with a hammer do not: reduced magnetization of the metal.
The core is attached to the base with glue BF-2 or nitrocream (a separate portion of the composite magnet should touch each other opposite poles).
The base of the cartridge (Fig. 3) made of soft steel with a thickness of 1 mm. Winding is wound on the mandrel — wooden bar height of 10-15 mm. Length and its width correspond to the dimensions of the core. 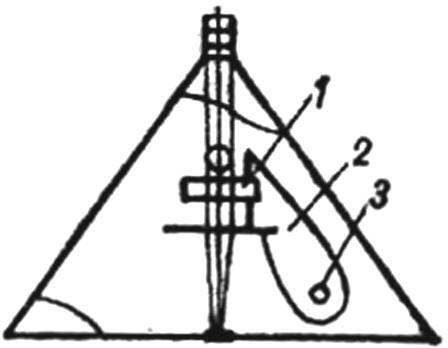 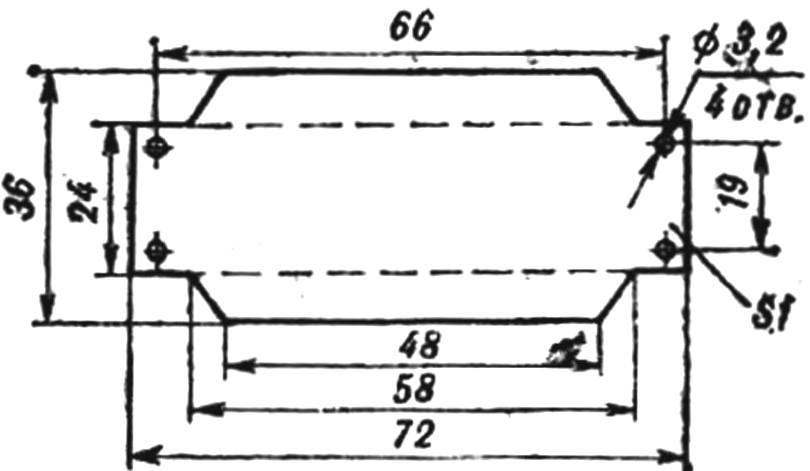 Fig. 3. The base of the cartridge.
Pre-bar covered with a layer of thin paper, and then wound by a wire of PEV or PEL of 0.2—0.5 maximum number of turns (gauge adapter).
Then the winding is carefully removed from the block and is isolated by a layer of thin paper or varnished cloth in advance of making the two pins with a length of about 20 mm.
Cover of cartridge (Fig. 4) made of brass with a thickness of 0.3—0.5 mm. the joints of the side walls are soldered. Cover fits tightly on the base of the cartridge.
The false panels (Fig. 5) can be manufactured from a variety of materials available at hand, for example, from plexiglass, aluminum, thin plywood, polystyrene or colored celluloid. Production technology is as follows. Sheet workpiece is transferred through the carbon paper drawing, tracing the contours with a pencil and cut them with a jigsaw. This operation is performed slowly: the blade during fast movements is heated and is fused into the workpiece.
Edges false panels process a file with a small notch or sandpaper. Then drilled holes for screws and decorative cap (Fig. 6) and polishing paste GOI, dissolved in kerosene to a creamy mass.
A decorative cap machined from brass, polished and otheramerican. It is inserted into the socket, to which is connected a shielded wire from the pickup. Braid fluster to the cap. 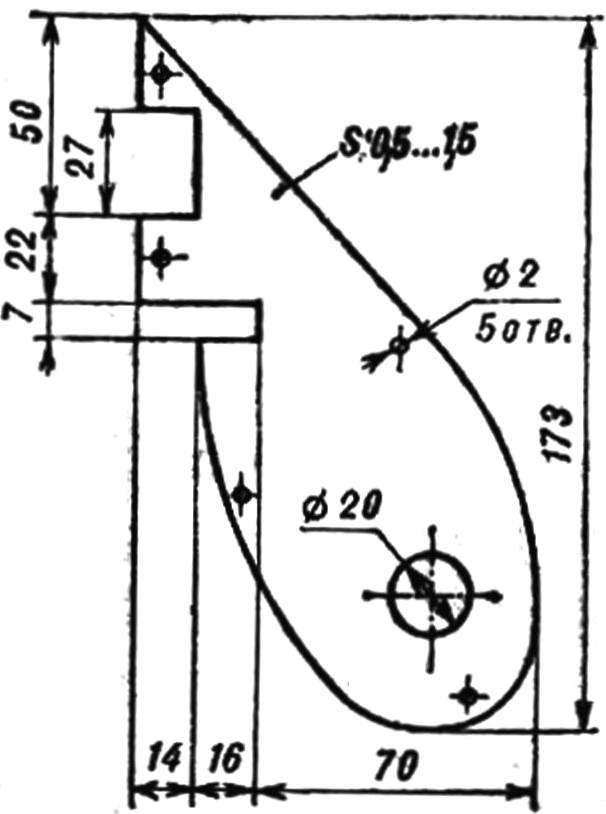 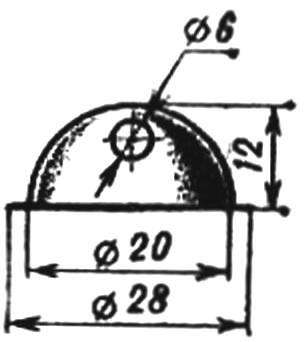 Fig. 6. A decorative cap.
Also chrome plated screws that the false panels provorachivayut to the soundboard, and the lid of the cartridge.
Guitar pickup set, 22 mm away from the stand. The distance from the 12th fret from the surface and the upper nut should be the same.
Then check for interference of the strings over the pickups, when they are pressed against the fretboard on the last fret. Otherwise, under stand the need to lay a layer of cardboard of the required thickness.
The low-frequency amplifier tool connect the shielded wire through the connector to the MIC input. If the sensitivity is insufficient ULF, you need to collect pre-amplifier, for example, according to the scheme published in “M-K” № 9, 1977, p. 42.
Yu SHURCHKOV