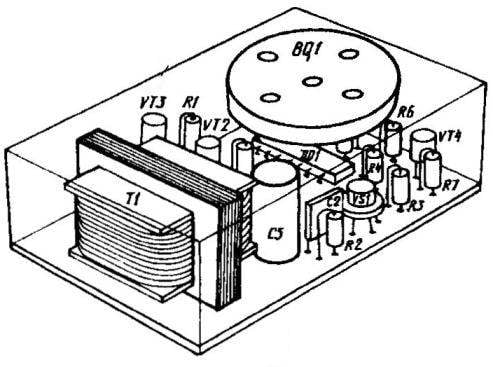 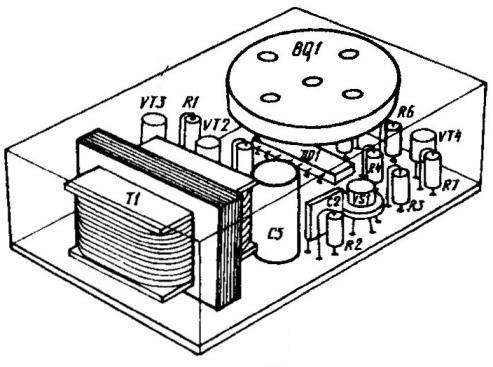 Lovers locks to open the other doors, alas, are not translated. And those who are forced to permanently leave your home unattended, not indifferent to the device that can protect a house from a ruinous invasion. A good additional remedy may, in particular, to serve as makeshift alarm “In the house — a stranger!”. I designed the device alarm is triggered pushed the door lock after a short delay, duration of 15-30 s. the Unexpected and sudden signal caught by surprise villain, living beyond the threshold of what is permitted.
Indeed, in opening the lock latch presses on the stem of the microswitch SB1, closing its contacts. The resulting voltage drop across the resistor R1 through the capacitor C1, the current pulse to the control electrode of the SCR VS1. A semiconductor device is unlocked.
Open state of the SCR is kept after the return of the latch, and the contacts of the microswitch to its original position. There is like memorizing the received command. Because the voltage at the open SCR drops sharply, and to present on the inputs 1 DD1.1 and 2 DD1.1 a high signal (log.1) is replaced by a low-level (log.O). This leads to the immediate switching of the cell 2I-NOT IC (MS). In the result output 3 cells DD1.1 — the log.1.
It begins a gradual charging of the capacitor through the resistor Sz Я8, and the node acts as a timer. Moreover, with the achievement of the NW voltage high-level appearance at the entrance of 6 DD1.2 log.1 cell MS switches, running to work, the pulse generator assembled on the elements DD1.2, DD1.3, R9 and C4.

The electrical circuit of alarm devices 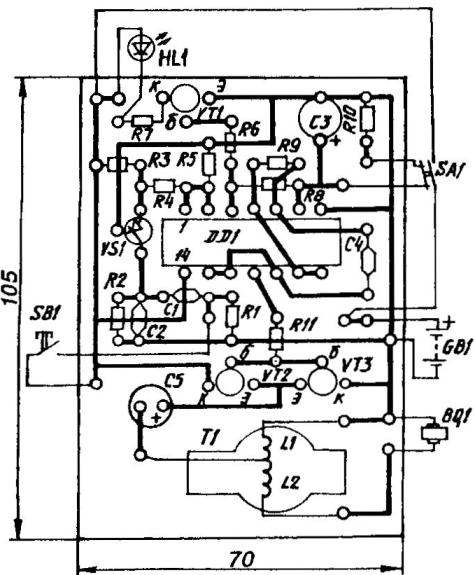 The topology of the circuit Board
The mechanism of action of logic cells of the type 2I-NOT and units built on their basis are highlighted in the journal “modelist-Konstruktor”, 1999. Emerging out 10 DD1.3 fluctuations through the buffer cell DD1.4 alternately unlock the transistors VT2 and VTЗ push-pull amplifier circuit, making through the capacitor C5 and the coil L1 of the coupling transformer T1 to flow currents of alternating direction. Well, in the winding L2 is induced by the increased voltage, reaching to about 22 V. Stacking with what is already available in L1, it makes a loud sound piezoelectric emitter ВQ1.
So as not to cause false alarms at the entrance of the host, is enough to turn off even for a moment the power of the switch SA1. This will ensure the locking mechanism of the SCR VS1 and the discharge of the capacitor through a low impedance Sz resistor R10. And since the delay signal is small, the need for timely blocking recall HL1 led, automatically included by the transistor VT1 when applying for its database log. 1 output 3 DD1.1.
In addition microcircuits K561LA7, led АЛ307Б and КТ3102Б transistors (VT1, VT2) and КТ3107Д (VT3) in the Assembly of signaling devices used resistors MLT-0,125, capacitors KLS (01, C2, C4) and C50-6 (Sz, C5), piezo buzzer SP-1 and toggle switch MT3 and microswitch MP 12. As T1 after a small upgrade fitted matching transformer from the portable radio receiver “VEGA-402”, “Selga-404” or the like. This per-mallowy the magnetic core cross-section 6×5 mm with windings. The modernization consisted in the following. Unused L2 it removed. Primary 1600-turn coil is reduced to 650 turns and is used as L2. But 1.1 is wound again (70 turns of wire PEV-2 0,15).
Power supply alarm are two series-connected battery 3LR12 from a pocket lantern.
Strength mechanical mounting and reliability of the electrical connections of the components enables the circuit Board from a one-sided foil 1.5 mm thick plastic. Its simple topology, designed to perform any known methods, are unlikely to cause problems for any of hams. 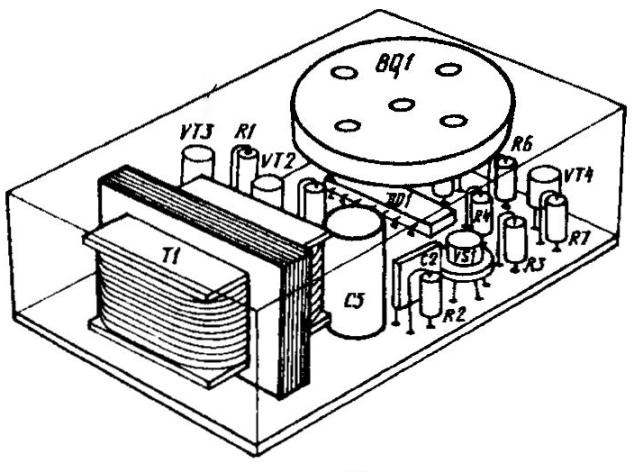 Layout option a homemade alarm
The adjustment of the device is simple too. In fact, it is reduced only to obtaining the greatest volume of sound alarm Yes achieve clear circuit operation at the time of the release of SCR. The first is achieved by selecting the value of capacitor C4, in which the pulse repetition frequency of the generator coincides with the resonance piezoelectric crystal of the alarm occurring at about 3500 Hz. Well, the second is finding the optimal ratio of the resistors in the divider R4R5 for supplying the respective voltage at inputs 1 and 2 are logical cells DD1.1.
Assembled electronic part of the device, including a power source, a hidden, inaccessible location (e.g. under the ceiling on the mezzanine). As securely hidden from prying eyes switch SB1 should easily accrue to the owner. The wiring between the parts of the device is hidden, eliminating any hint about the location of the alarm.
Depending on the location of the device layout of the alarm device can be performed in different ways. In most cases, acceptable version of the assemblies in the General case as a circuit Board and a power source and alarm.
Replacement battery cell or battery bolsaescola network adapter here is hardly advisable: prudent attacker will certainly try to shut off the power of the planned flats with flap on the landing. In favor of Autonomous power sources and the fact that consumption alarm current minimum. Then, the battery cell or rechargeable batteries will last a long time.
Yu PROKOPTSOV