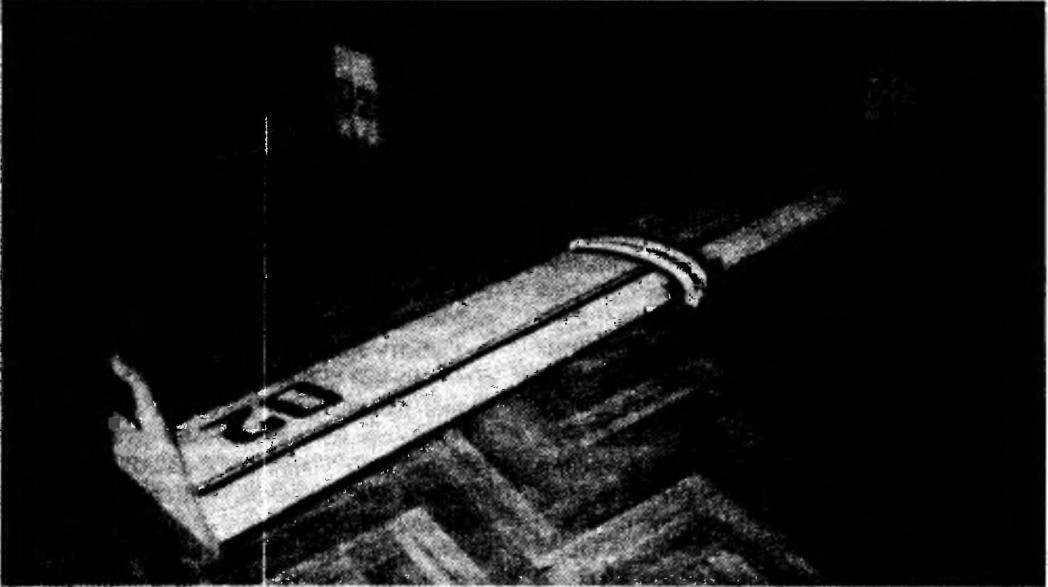 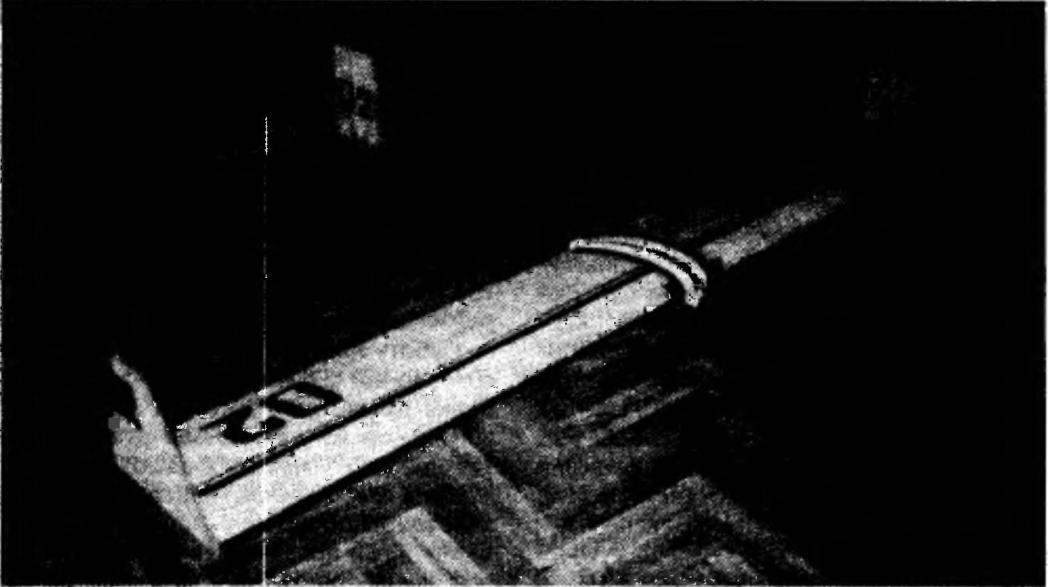 Model glider, which we would like to tell the readers of the magazine, was built of the most simple and cheap materials. I think that its design will be of interest to novice modelers. After all, despite any economic problems, the fascination of students with model airplanes has not waned, and only the lack of materials needed to make models that can reduce infantile interest in it.Our model of a glider was built and tested in the fall of 1998. It is easy to manufacture, easy to debug, and makes a beautiful long flights. Well, it can be done not only in the aeromodelling circle, but also at home.

For the construction of the airframe will need materials such as pine slats, tracing paper, cardboard, veneer, plywood plate with thickness of 4 and 10 mm, and PVA glue.
The fuselage of the model is collected from a longitudinal (pine rack of variable cross-section) and the bow (10-mm plywood plate). The last jigsaw to cut the holes for the relief of the airframe.
The wing is stacked, consisting of spar, leading and trailing edges (from the pine strips), ribs of cardboard and plywood – ribs with thickness 4 mm. the Latter is installed in the center section and the wing — as sakonze-vok. The center section is sheathed with 1-mm birch veneer.
Wing it is recommended to collect on a flat Board stocks, in this case, it is symmetrical and flat, and drying the adhesive is not tightening it. Wing skin — from the tracing paper, double-sided, on white glue. After covering the tracing paper must be stretched, which it is slightly moistened with water using a damp cotton tampon and dried. The final step in the manufacture of the wing is to cover the sheathing with two layers of liquid Amalita. 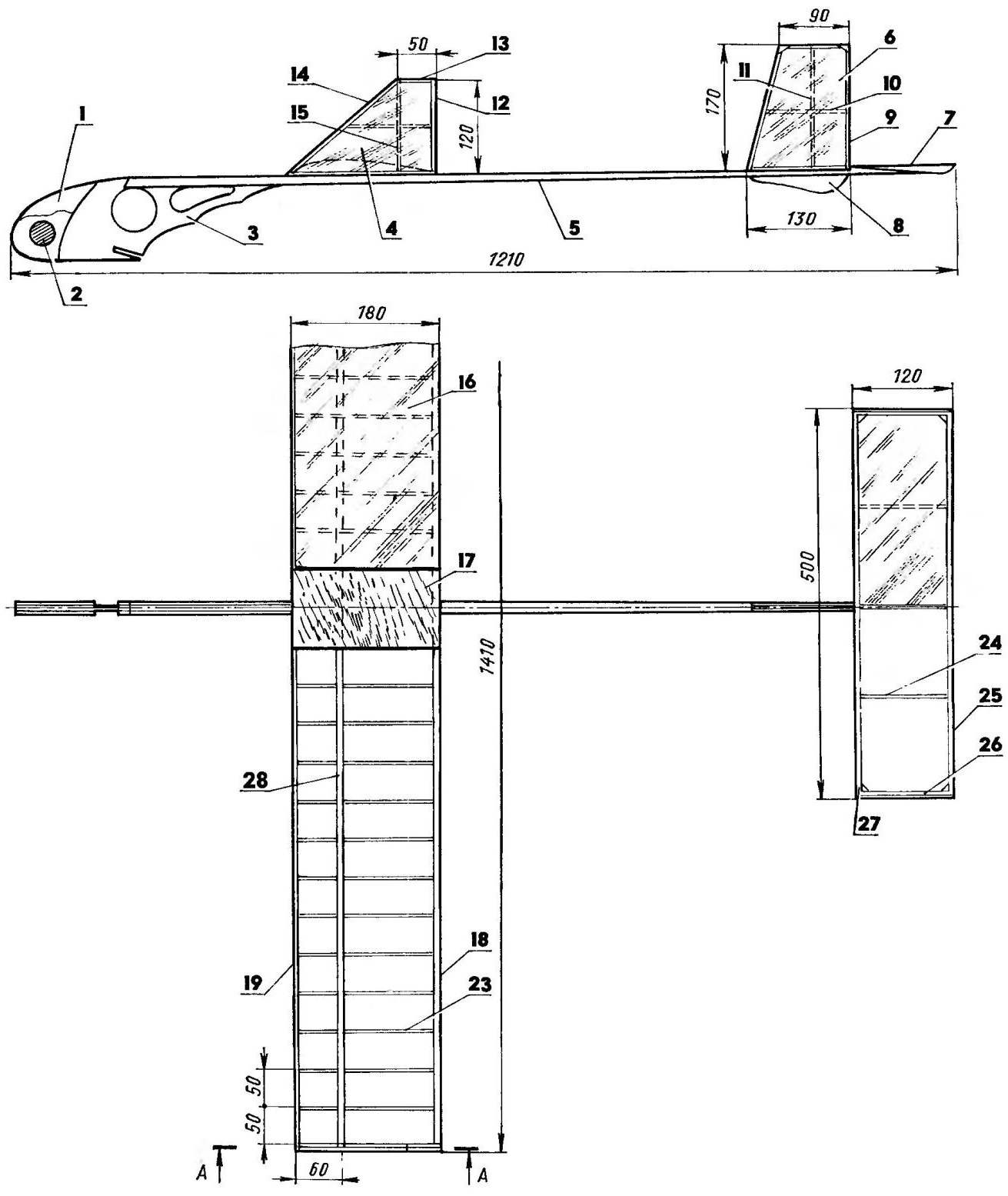 Specifications
model glider
Scale, mm……………………………….. 1410
Length, mm…………………………………1210
Wing chord, mm………………………… 180
Wing area, dm2…………………..25,2
The surface of the stabilizer, dm2………….6
Load area dm2 ………………. 31,2
The wing is covered with tracing paper, will be durable enough, but still better to cover it with Mylar film. To secure it to the frame, you will need glue BF-2 and the electric iron. First, the lower part of the frame is covered by two layers of glue (with intermediate drying), after which the wing is in the film and “smooth” to the frame with an iron regulator which is set to “silk”. The overlap width of 10 mm at the front and rear edges bent in the upper part of the wing and also glued to the frame. Similarly fitted by a Mylar film and the upper part of the wing. To pull the film, it iron iron regulator which is set to the “cotton”. By performing this operation, you need to constantly ensure that the lower surface of the wing is not twisted, but remained flat. The wing is attached with rubber threads to a set on the fuselage plywood area the size of 180×100 mm.
The tail and ears are collected from pine slats cross-section of 5×5 mm and is also upholstered in a carbon copy of two sides of tracing paper or Mylar film according to the above-described technology.
When adjusting the model needs to ensure that its center of gravity was located at 25-30% of the chord length of the wing (the selection of the mass of the lead load in the nose of the fuselage). More precisely, the alignment determined during trial runs. Properly adjusted the model glider flies well at start-up with hands and with lifelines.
N. BOHEMIA, Elektrostal, Moscow region.