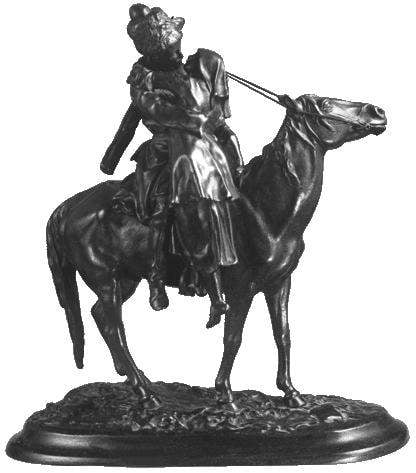 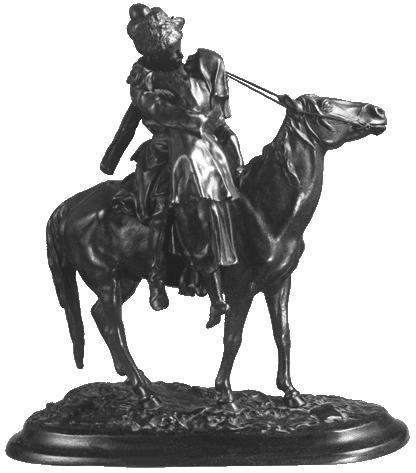 Castings from nonferrous metals and their alloys used in engineering a lot, including quite complex and miniature, batch production can afford only company with precision technology. However, a single (or even small-scale) microlite quite able to organize and at home. With modern technology, it turns out that can rival the old method of injection molding using simple manual centrifuge.

Almost everything you need for this microlite can be made. The cost is minimal.

Really required in the casting flask in this case is the length of a conventional steel pipe with a diameter of 50-60 mm and thickness of 2-3 mm For casting products of different sizes is good to have a few flasks of different diameters, provided that each freely fits in the bucket of the centrifuge. With such a set can be cast in turn a series of parts.

To flask in its simplicity, and centrifuge. Wooden handle it has a length of about 200 mm and a diameter of 20-30 mm. In the axial hole of the handle is inserted a bolt M8. To it using scontrino nut is attached to the metal earring so that the handle and the earring easily rotated, without interfering with each other.

To the earring on the beam of 6-mm steel wire is suspended from the bucket to the flask. Board tubs made of 60-mm cut steel pipe 80×3 mm, welded the bottom of steel sheet thickness of 3 mm. Shackle height of 200 mm from the same 6-mm steel wire.

To confidently use this centrifuge, it is necessary first to train a little, remembering how in school in fizkabinet had to turn on a string pail of water in the study of centrifugal force.

However, now instead of twine and a pail of water in the hands of a homemade centrifuge bucket, the bottom of which is plastic (not broke) a glass. But the water is normal, what was in school physics experiments. And centrifugal force are similar. Firmly holding the arm, I rotate the entire chain (earring — rocker — bucket and container of water) around the bolt axis, trying not to spill a drop. 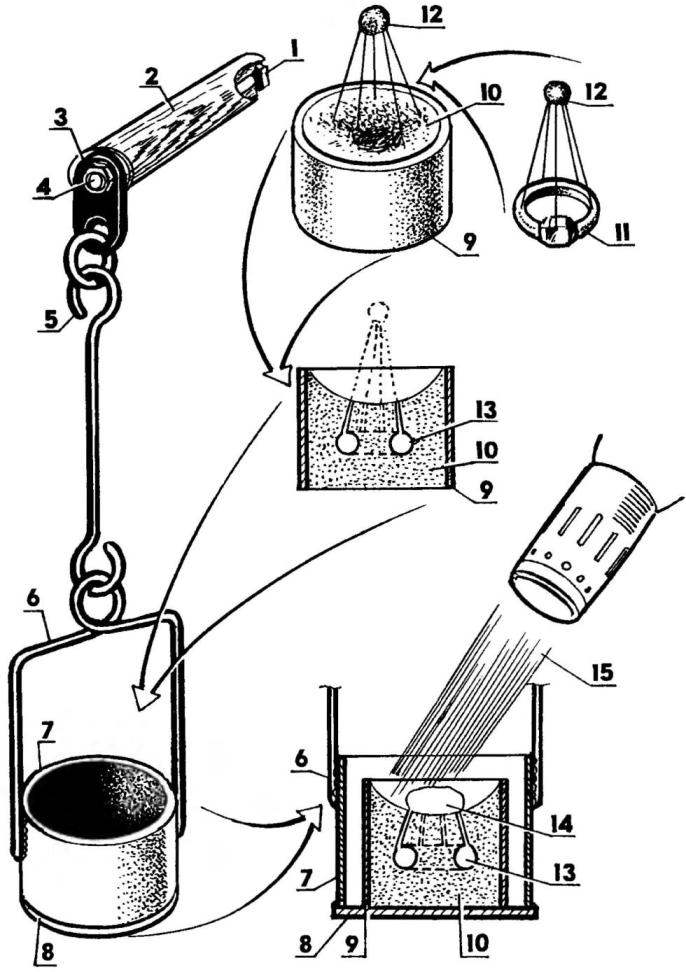 1 — bolt-axle; 2 — wooden handle; 3 — metal, easy spinning earring; 4 — secondlina nut; 5 — steel wire rocker; 6— handle; 7 — Board tubs; 8 — the bottom of the tubs; 9 — flask; 10 — molding composition; 11 — wax model; 12 — wax ball with the technological wire pins; 13—injection mould with Gating channels, formed after the melting of the wax and removal of pins; 14—molten metal (alloy); 15 — flame gasoline burner;
fill a mold with a melt during rotation of the centrifuge and the subsequent operations to extract and Refine the finished product not shown

Accustomed, you can then deal not with water but with molten colored metal (or alloy), which will be pressed by centrifugal force through the channels Gating in the molding cavity in the flask, installed in the bucket instead of a plastic glass.

Perhaps the most difficult and time-consuming in mikrolimano is the fabrication of three-dimensional, life-size wax model. This molded wax manually using a heated eye scalpel or hot darning needle With the utmost thoroughness, even worked out the fine details, because the molten metal (as well as any alloy) errors and sloppiness are not very forgiving. Moreover, casting is performed in a centrifuge under pressure, shows all the flaws of the model!

In my practice I use a wax model, the height of which is not more than 40, and a diameter of 50 mm. At the same time trying to respect the proportionality to the mass of metal in the casting does not exceed 40 g Limitations are mainly due to small capacity burner that I use for melting.

Based on the proportionality do not forget about the use of reference data. In particular, cast silver figures, focusing on the density of the wax and silver.

The wax model is put on the scales VLR-200. The scales multiplied by 12 and know a lot of the future cast in sterling silver. Factor of 12 take slightly inflated, so 2— 3 grams of metal in semi-finished draft to be redundant. But this margin is justified, for it is better to have a small excess (usually all of it goes on the inevitable needles, crystallizing in the runner channels), which can then be easily cut off from spitting figures, than not to get the silver and spoil the product with the model.

In different places in a wax stick a heated metal pins thickness of 1 mm and a length of 60-80 mm. such Usually (purely auxiliary) elements it takes from 5 to 8 pieces. Recommended materials — polished stainless steel wire or nichrome. The upper ends of the pins that connect a piece of wax.

Given the dimensions of the model, pick up the flask. Its height is such that the distance between the imaginary bottom model was 10-15 mm, and in the upper part of the molding material housed Gating bowl for melting metal.

The molding material is prepared from two parts plaster and one carefully milled talc or pumice. The composition is well mixed, and then poured into water. Molding composition should have the consistency of sour cream.

Put the flask on a flat sheet of plastic and pour it in the molding material. Then take a wax model for pins and with a slight vibration immersed (to remove air bubbles) in the not yet solidified “cream”. Not earlier than half an hour with a scalpel cut (without removing pins) Gating the bowl, it should subsequently contain as much metal as necessary for the molded products.

To remove the wax from the plaster of the flask put it on the hotplate (Gating channels down) and loosely cover with a ceramic plate, for 1-1,5 hours bring the temperature of the caking of the molding material to 350 °C.

After melting of wax heating is not stopped. On the contrary, continue to burn gasoline burner flask, put sideways on asbestos cloth to remove the wax

Only with a thorough warm-up, characterized by a well-marked redness of the walls, stand the flask in a hand centrifuge. In Gating the Cup, gently lay the right amount of metal and begin melting. To do this, use a petrol burner with the temperature of the torch not less than 1200-1500 °C.

In a narrow Gating channels melting the metal itself, of course, is not. This requires smashing it to the bottom of the Cup strength. For example, the centrifugal, which will occur during rotation in the centrifuge.

And really. When the melt is similar to a movable mercury bulb, gathered in Gating the bowl, begin to rapidly rotate the centrifuge and the metal flows into the form. As a rule, twenty revolutions of the centrifuge is sufficient so that the melt filled in the entire form.

For cooling and extraction of the finished casting fills the hot flask under a stream of water directed at the runner Cup. From sharp temperature drop form immediately destroyed. Gently pull the casting out of the wreckage, completely cooled, treated with fine sandpaper, polishing paste GOI and bring it to a Shine greatcoat cloth.