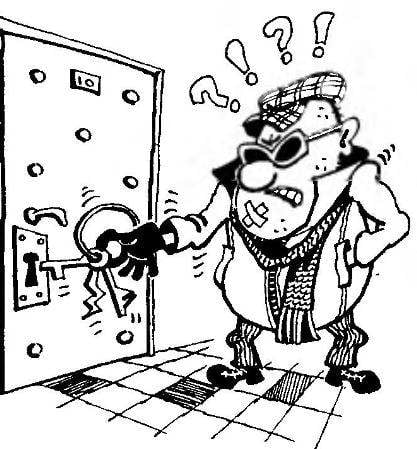 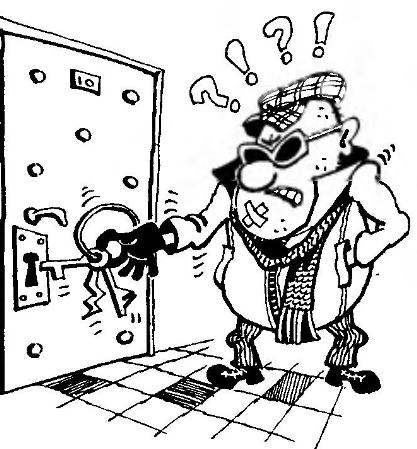 To protect your home from professional thieves and robbers — the task is technically complex and expensive. And the solution to this problem should be dealt with by professionals. Typically, experts recommend the installation of steel doors of various structures, castles high secrecy, security alarm and much more. But we should not underestimate the entrepreneurial craftsmen, who sometimes create such a protective device in front of which is powerless even professionals of the criminal world.

So, the pensioner V., leaving summer at the cottage, the front door in his hallway hung a mirror film. Once the trap was set — the robbers, opening with the master key to his apartment, saw in the dim hallway, swaying his own reflection. Nerves the burglar could not resist, and they fled.

Castle on the castle…

This castle-snag. On the door — the usual rotary handle with pad at the bottom of which is of a very simple lock. However, if you insert the key and open the lock, door handle with plate can be rotated and the lining will be found hiding underneath the main castle — as a rule, quite complex, better security.
Castle-snag made on the basis of a turning door handle and small lock cylinder is usually equipped with such mailboxes. Cover homemade, it consists of two parts, the movable and stationary cut from a sheet of aluminum with thickness 4-5 mm. In the lower panel proprietarian a slot of complex form — post projecting from the lock cushion allows you to either record in the groove of the upper cover in the vertical position, or (when you turn the key 90 degrees) to rotate it together with handle. 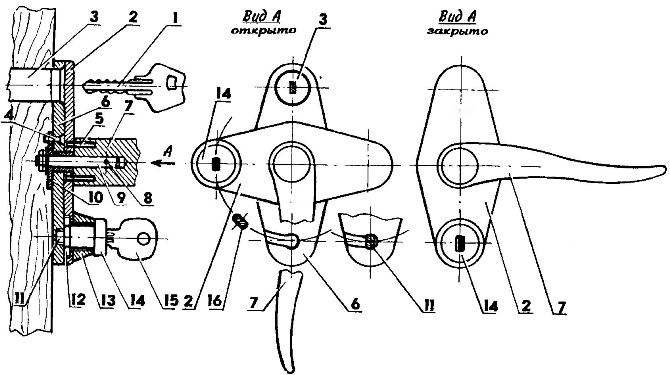 Secret castle:
1 — the key of the main lock; 2 — plate rotary; 3 —larva main lock; 4 — a bolt and nut of fastening of the sleeve; 5 — stud (2); 6 — part plates, fixed; 7 — the handle of the door, turning; 8 — pin axis of the handle; a 9 — axis handle; 10 — Bush; 11 — element, auxiliary lock, locking (the locked position), 12 — a nut of fastening of the auxiliary lock; 13 spacer; 14 — auxiliary lock; 15 — the key accessory lock; 16 — element, auxiliary lock, locking (in the “open”position).
Trim with mystery
On the door — the usual metal plate, no different from those that are usually contribut keyhole. However, the attempt to insert into the bore, a key to nothing — instead cuts under “safe Deposit” key in it — just a round hole. But this pad is only for strangers, and the landlord with the help of hanging on a bunch of special kuca-screwdriver turns a few turns one of the screws by which the plate is attached to the door, and keyhole acquires the configuration corresponding to the shape of the “safe” key.
How is the mysterious pad? Its Foundation was the appropriate pair of gear — gear and gear-valve with outside diameters of 13 mm and, respectively, 48 mm. At the time of such gears in there were mechanical calculating machines. And their thickness may be any — not too difficult ottercat gear workpiece on a lathe to the desired size.
Gear pair within the casing, machined from aluminum. And in the housing, and a toothed wheel — the same keyhole, but to insert the cover key can only be the case if the longitudinal axes of the holes coincide. To combine them, turning the gear by using the gear. To drive the latter serves homemade special bolt complex shape head Phillips screwdriver — same as the screws that mount to the door itself on the walls. However, to carry a regular screw driver bit onerous, so it is more convenient to use a homemade screwdriver, made from an old key. 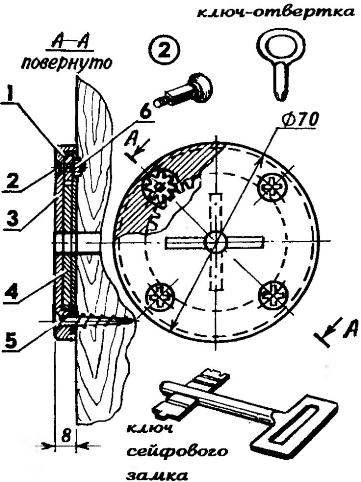 Trim the “secret” keyhole:
1 — pinion; 2 — bolt, special; 3 — panel; 4 — valve (gear); 5 — the screw of fastening of the lining (3 sh.); 6 — nut of fastening of a gear.
The key to the secret
It is known that some burglar entered the apartment, picking the lock, the key of the tens is similar: sometimes one of them, unfortunately the landlord still fits. To the hassle of these “experts” were in vain, make your lock extended key, therefore, a new pickguard with rotary spacer. In the last propisyvaetsya through a rectangular hole dimensions are selected according to the key of your castle. Well, the extended key is modified the key staff of your castle (schema refinement — in the drawing). That’s all. After such updating, the lock can be opened only by your key standard length. 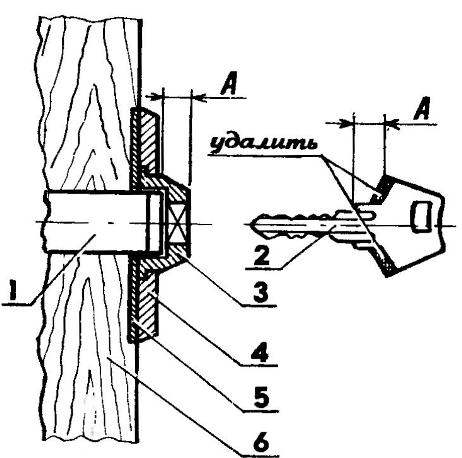 Pad under the extended key:
1 — lock cylinder; 2 the key and the way of its completion; 3 — spacer, rotary; 4 — panel; 5 — base-lining; 6 —the door.
I — a!
Electric doorbell vyzvanivaet the same trill, regardless of who presses the button member of your family or people completely extraneous. In such cases, it helps peephole, but not always on the landing light enough to accurately distinguish her from someone else.
I advise you get a simple device that makes it easy to divide the visitors into friends and foes. We need only to establish another call with the “voice” that is different from the main one.
Button this “call for their” should be set to known members of your family. For example, under the door trim as shown in the figure.
You can also disguise it under a nail head or screw on the jamb of the door. However, the location of this button should depend only on your imagination.

Extra hidden zvonkovoe buttons on the front door.
Please turn
People old enough will remember that in the old urban flats on the front door hung round enamel sign saying “Please turn”, the center of which was a small head. It was enough to turn her — and the room was heard a melodious trill. So worked up mechanical doorbell, when electricity was known only by hearsay.
Such a call may well be applied today — the power supply is not always characterized by consistency, and locations where electricity can be found only in battery-operated flashlight, still abound. To make such a call is easiest on the basis of the details of Cycling — zvonkovoe Cup and base. In addition to the door chime will need machined on a lathe bushing and roller. Mounted bell at the entrance door of your apartment. 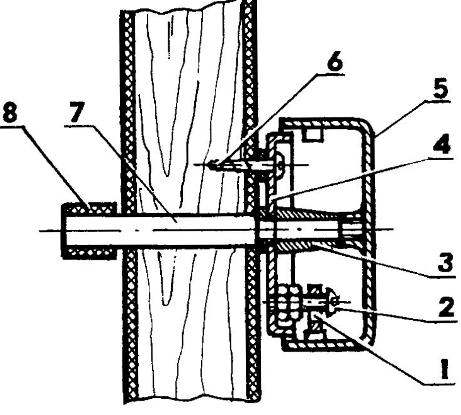 Mechanical doorbell:
1 — tongue ring (washer or nut); 2 — bolt and nuts of fastening of a latch; 3 — bushing; 4 — the basis of a call; 5 — Cup ring; 6 screws attaching the base (3). 7 roller zvonkovoe Cup; 8 — head ring (rubber).
This call works in the following way. During the rotation of the head shaft is rotated and the associated bell Cup. The protrusions located inside of the bowl, on its circumference, alternately touching the tongue is freely suspended, a sufficiently massive steel nut or washer and the apartment bell rings.
I. VINTIROV,engineer