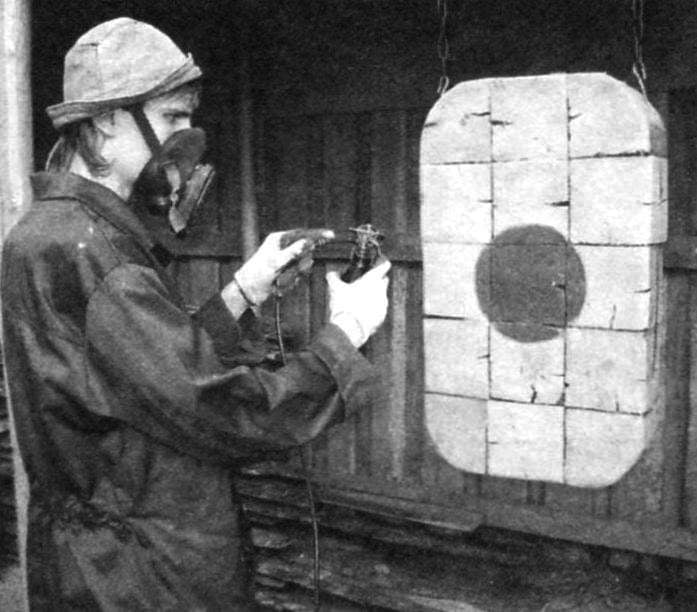 Playing Indians, army scouts, or as they say, “war games”, often not complete with throwing knives, Darts, archery in the target. And the desire to get to the center (“ten”, “Apple”) live in person along with other basic instincts. One weekend day I found the familiar occupation of his teenage son! Not all he did: the knives flew past the goal, not stuck in a tree obviously lacked skills.
– So who throws knives? Let me recall the old!
Throw was good – the knife stuck in the fence almost in the center of the chalk circle.
Filled with legitimate pride, I went to the shop and from a sheet of solid foam PVC sawed hanging target.
A good goal is to get for a beginner “commando”: the failures of the knives do not deteriorate, and when hit -easy to enter and just as easily pulled out.
But after a few weeks the foam began to collapse from the numerous already pretty accurate hits, and the boy began to ask to make a new, more durable target.
– Need to cut down butt of a large tree, but where can I get it? – I replied to his requests, – and, meanwhile, pondered other, more affordable options. EV-ri-ka! Kind of stebelka from scraps of pine lumber suggested solution is to make the target typesetting.
Chainsaw cut fifteen pieces of timber with a section of 150×150 mm with a length of 200 mm is based on five rows of three pieces each.
Already in the Studio, laying on the concrete floor and picked up every three bars of the same size, I decided on the method of connecting all the blocks together.
Of course, not without metal, although it was possible to connect all the sticks wooden sticks. Handy tubes from the backs of old armored beds – it took a few pieces with a diameter of 12 mm and a length of 300 mm.
For drilling bricks to a depth of 250 mm was necessary to produce an elongated drill bit, to carry out the welding to the normal 12-mm additional drill bit shank diameter 10 mm.
Assembly of a cloth target from bars demanded a sharp hatchet, a low-speed electric drill and a little ingenuity.
Hatchet to podstrogat mating sidewall three bars of each row. Then, placing the middle bar on the side, drill a hole to a depth of 70 mm from the front edge through the middle to half the depth of the side. The next step is to gently remove the middle bar and, turning, put it on the other side. Clutching their leg, ready hole medium extend to half the depth of the second side (vpoldereva)…
This “hoax” will lead to aligned holes in the three bars of each row, which are placed on the prepared tube.
Assembly of all ranks together by the same method. However, you will need a tube length of 600 mm. it Should also be podstrogat the mating surface, rows of sharp hatchet and align them when assembling one of the front side. Skanowania tube – only one on the “middle” of the bars with an offset from the edge of the front side by 90 mm in order not to overlap with the tubes in series.

Target for knife throwing at the target:
1 – element targets (timber 150X 150,15 PCs); 2 – clamp with ears (the wire d6); 3 – suspension (chain, 2 pieces); 4 – coupling clamp (M6 bolt with a nut); 5 – hook (2 pieces); 6 – Nagel (tube d12, 4 items); 7 – nails suspension (2 PCs); 8 – beam
Have podobrano lying on the floor of the target need to round the corner bars to pull it around the perimeter of the temporary wire belt, draw a chalk line 80 mm from the flat face side, on end.
Then a chainsaw namalowane line of slotting groove depth of 10-12 mm. to attach a wire with a diameter of 6 mm, the ends of which are in place to weld the two nuts M10 and the body of the target to pull the MB bolt with nut.
Monolithic structure ottercat a chainsaw in the size of 160 mm with an uneven front side, cut the chamfer all the sanding. In order to weld two symmetrical lug mounting chains.
Already in the courtyard is suspended on two steel I-beam driven into the canopy of a large nail the target was covered with yellow impregnating liquid. Central bar-the bullseye — painted in bright red color.
Conducting acceptance tests of goal-setting, my son was pleased with the result.
Massive construction is now not swinging from knife blows, his blade easily enters along the fibers of pine timber, and if it misses, the blow is softened by the arm.
The chain allows you to adjust the suspension height of the target for different exercises. Sizes it was designed for the budding “Robin hood”. For the more experienced thrower the size of the structure can be reduced to three bars in four rows.
When there is a sufficiently identical and qualitatively ostrogannyh bars maybe a simple gluing of the canvas of the target, followed by rounding, propilivanie groove, tie a bandage…
A. MATVEICHUK, Zavodoukovsk, Tyumen region.