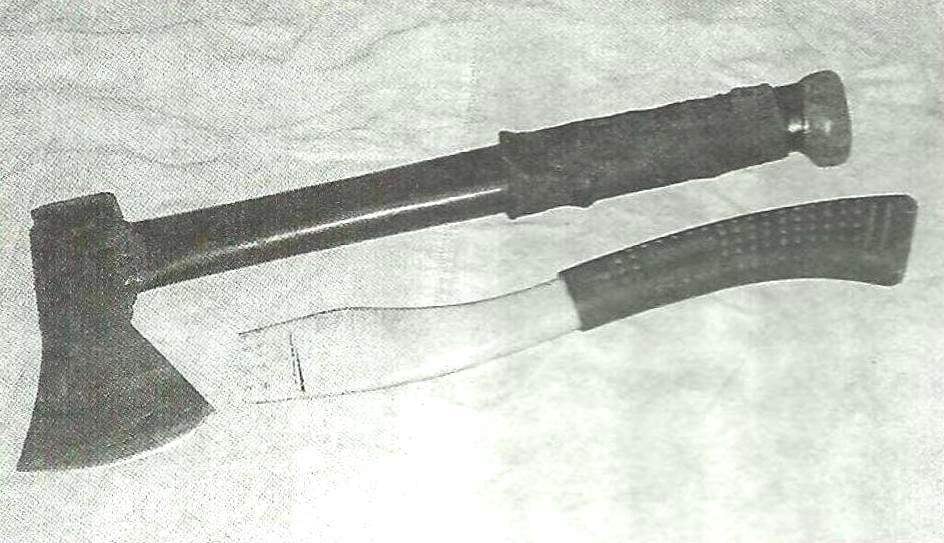 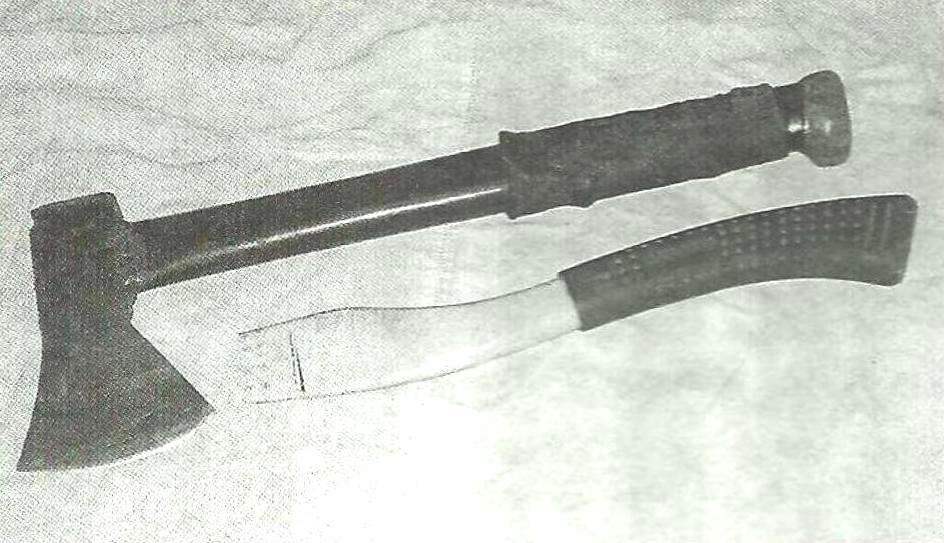 I don’t know what the standard of “rivet” in China, like axes with tapered eye and epoxy fill as a retainer of the ax. The first such axe weight 0.6 kg with wooden handle I bought after unsuccessful attempts to find a domestic tool of carbon steel. Chopping axe good, about the level of our full-sized axe, perhaps due to a more narrow profile. And although I used it infrequently, the epoxy took off pretty quickly. Seeing as he was impaled, was disappointed. Thought to make him all-metal, Yes, there was welding.
The second one I bought later. Attracted a very convenient form ax: fiberglass with rubber cover. And inspired the name – “expedition”! Embarrassing, really, the same epoxy in the eye, but I wanted to believe that so many years have come up with something better. However, the new axe does not become “loose”, and after the first strike flew into the bushes.
The idea was counterbore the eyelet under the wooden axe-handle, but then from the walls of the butt is almost nothing left, and the ax was still narrow to have a normal strength. In General, and throw a pity, and cannot be used.
I had to think of as “Chinese” to do relatively light, but strong and powerful axe. Decided as the stick to accommodate a thin-walled pipe.
It would be best pipe with an outer diameter of 32 mm and a wall thickness of 1.6 — 1.7 mm. (you Can try to put a thick-walled pipe, but to fit it is heavier – will need a hammer, anvil, and possibly heat).
From the pipe made of oval about the size 24×38 mm. were Compressed in a Vice, not a hammer. The bottom fastening parts with a angle grinder cut out a wedge the length slightly greater than width of an eye of an axe. The size of – the place. Neck tucked in vise and lightly hit the corners for rounding. Then sounded the trumpet in the eye. Fixing part of the ax itself is almost take the desired form. Otherwise, it is necessary to ensure that this end of the pipe is sitting firmly in the eye, but was crushed inside, and front cut-butt out 2 – 3 mm from the eye of the axe. The protruding edge, slowly, up the back, not trying zaprositi edge to lock with a single blow. You can just break or crush the metal. Better slowly, over several passes around the perimeter to achieve a dense flaring without gaps. 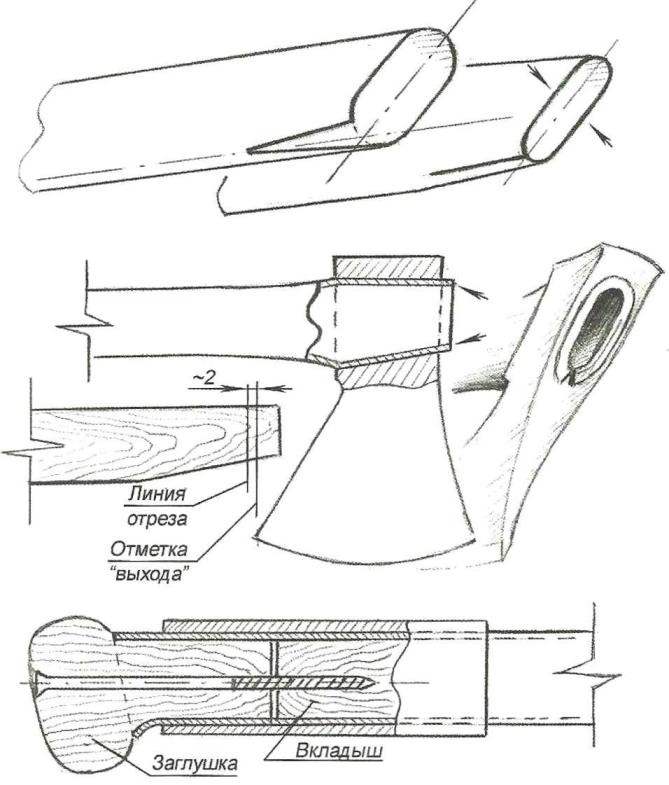 The design of the ax of steel pipe for the Chinese axe
If you are going with an ax just in the kitchen meat chopping kindling to nasipit, the product is ready. You can even scald with 2 sides around the eyelets for secure fit. Brew better “kislakoy” so as not to burn the tube, and blow such a welding brings better. And if you’re going to cut something heavier, then the weld will hold.
To protect the pipe from collapse, from the inside, reinforced it with a wooden insert of solid wood (birch, oak, etc.), which is tightly adjusted to the size so that the end bit went ahead to make it easier to knock out after fitting, for the same lightly lubricated liner oil. Noting the place where the liner came over the edge, cut off about 2 mm deeper for a tighter fit. By the way, the liner I did not on the whole length of the future of the handle, and left rear about 5 — 6 cm on the cover-boss.
To exclude the ingress of water, and at the same time to strengthen the neck of the ax, the front hole choked, privaris cover thickness of about 1.5 mm. Obariv pipe on both sides, finally scored liner into place as it should pre-saturate it with engine oil. The pipe from the inside is also oiled. The liner is fixed to the side screw.
The length of the pipe-ax, everyone chooses for himself “according to appointment”, I did longer, for a stronger impact. 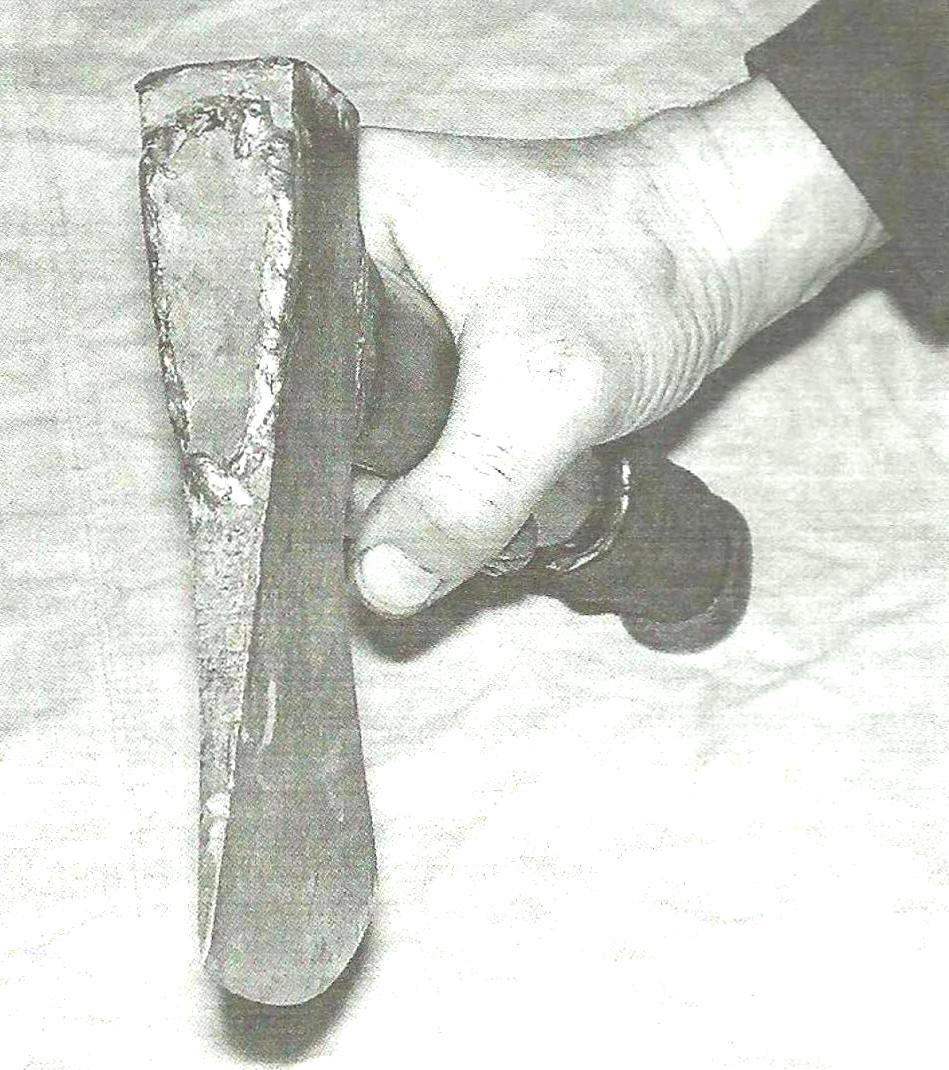 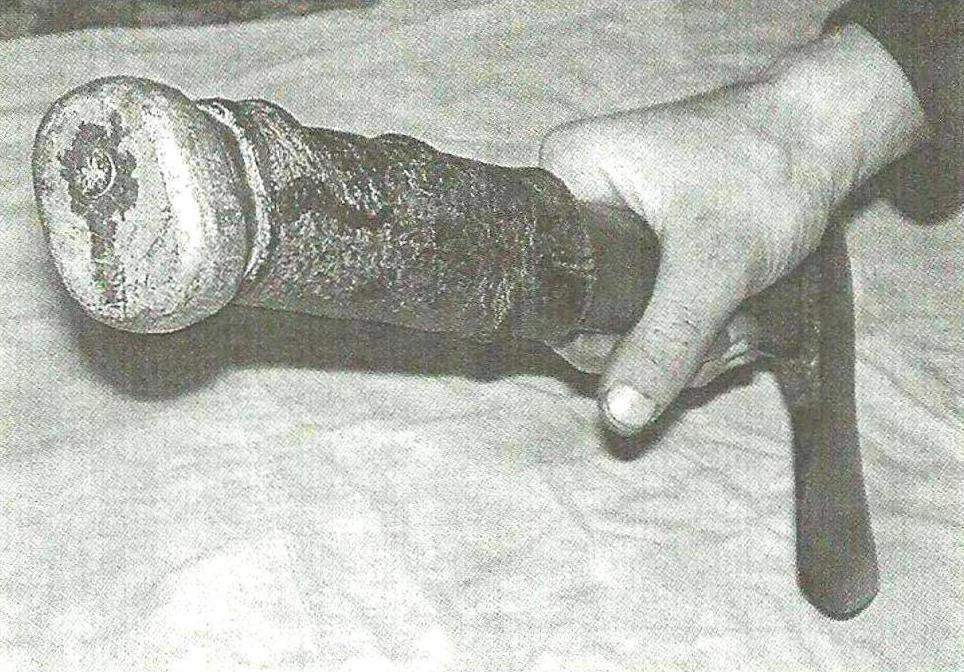 Welding plugs and flared front end section (end) of the ax with an ax
Reinforced rubber hose on the handle sat a very well – even locking it is not necessary, but the grip was too thick (although who has the bigger hand, it may be at the time). So pick up a piece of pipe made of soft plastic approximately equal to the diameter of the pipe ax. Heating it over the gas stove as she could pushed the axe handle. What happened first, but then turned out to be very convenient. The back cut slightly back on the bottom edge and closed by a wooden stub shank in Hermetica secure its longitudinal (axial) screw 100×5 mm.
O. ELISEEV, Syzran