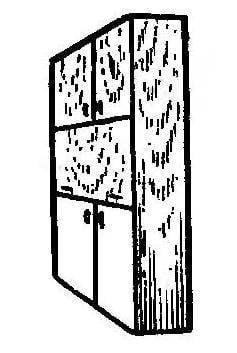 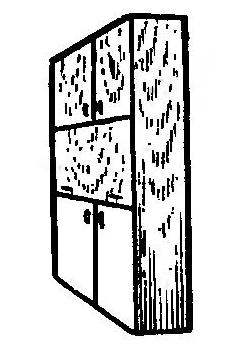 Whatever your urban apartment — prestigious or ordinary, large or small, comfortable or uncomfortable, to allocate space for a home workshop is extremely difficult. However, with a strong desire and sufficient carpentry skills master-samudayik can equip themselves quite comfortable workplace that is easy transformirovalsya in a flat Cabinet on a floor area of only 0.36 m2.
This Cabinet is better to make from floor to ceiling and fix between them by means of four screw jacks; no need to drill concrete wall, drive them to the dowels and to fix a design on the wall with screws. Besides high wardrobe at the same occupied area has a maximum useful volume.
Design workshop-transformer is like an ordinary Secretary with a flip-top. To make it, you will need drevesnostruzhechnoj plates in the thickness 16-20 mm (all dimensions in the drawings as applied to chipboard 20 mm thick), a bit of plywood and hardboard.
Manufacturer secretaire-workshop begins with side panels (width about 300 mm, and the length should be 15 mm less than the distance from floor to ceiling), shelves and cross-beams of particle Board.
During the machining of workpieces most importantly — to strictly maintain their size and Squareness of the sides. Even small deviations from the drawing can cause unrecoverable distortions in the Assembly of the secretaire.
To connect the parts it is best to use a very durable and high-tech docking station, comprising
only from the M6 bolt with a spherical head and nut. At the same time in a shelf or cross member drilled hole of the nut, the diameter of which is slightly less its size “turnkey”, which allows some tightness to drive him nut. In the sides, cross members and shelves are drilled corresponding holes with a diameter of 6 mm for the connecting bolts. To the connection of the parts of the secretaire was accurate, it is necessary to strictly follow a certain sequence of operations. 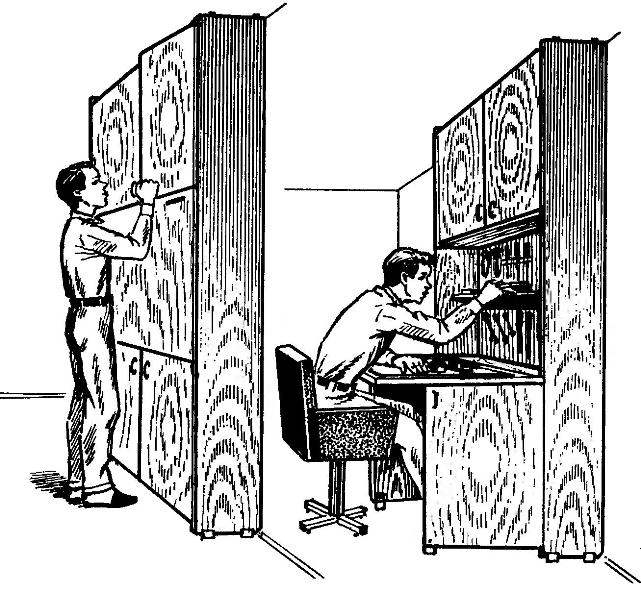 A Secretary’s workshop (on the left in the inoperative position, to the right in working position) 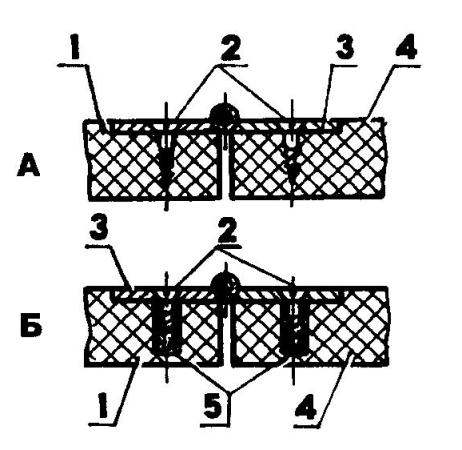 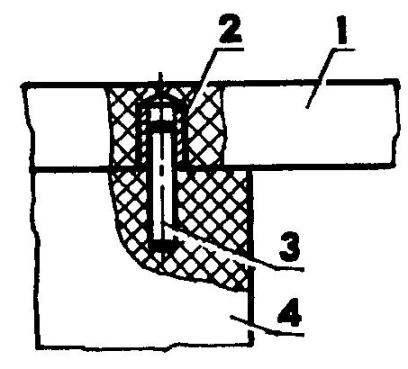 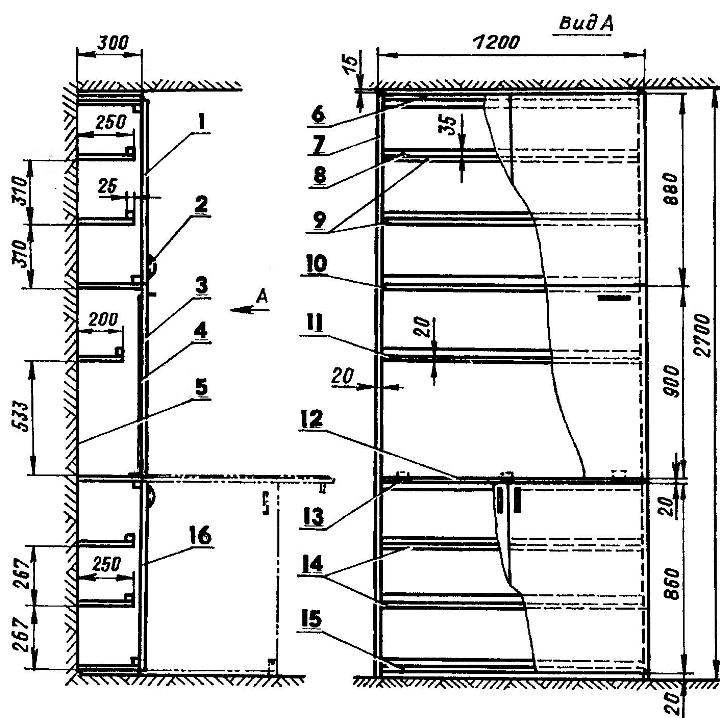 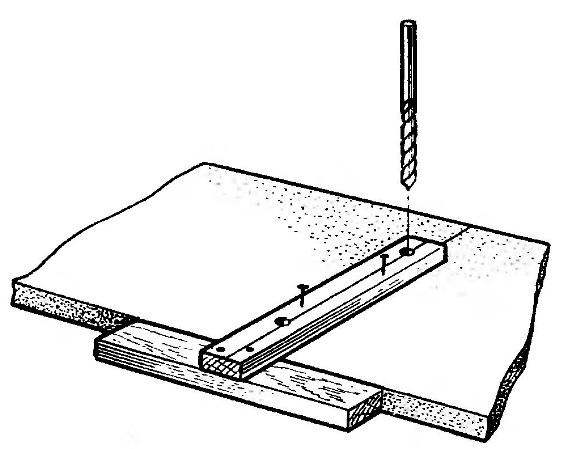 Jig for drilling holes of 6 mm in diameter in the side panels, shelves, and cross members 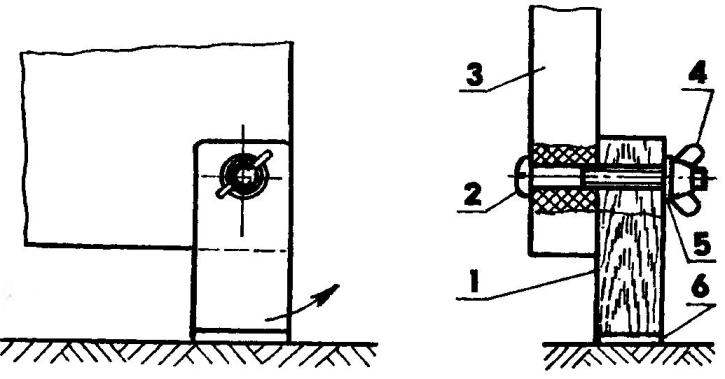 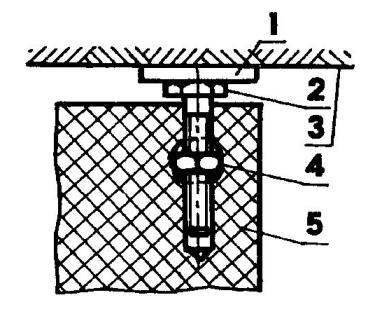 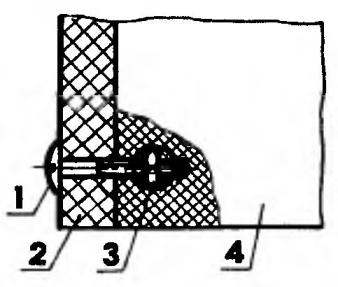 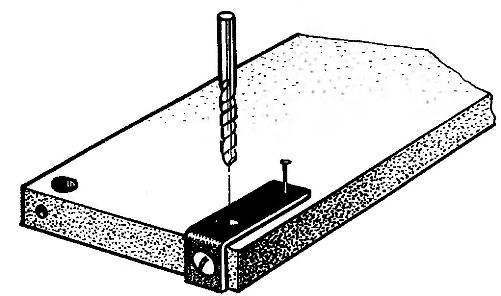 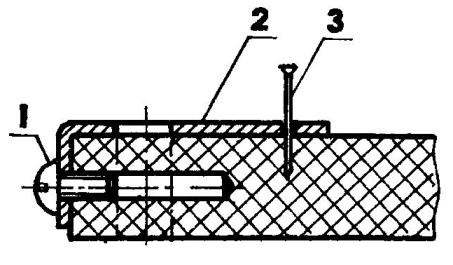 Jig for drilling holes with a diameter of 9.5 mm in shelves and crossbars:
1 — guide screw; 2 conductor (steel strip 20×2); 3 — nail-retainer
For a start, marks one sidebar — it is under the connecting bolts are depicted axes of all holes. It is desirable that the distance between the holes was the same: in this case, it will be possible to use a simple jig that makes it easy to combine the axis corresponding apertures on the sidewalls, shelves and crossbars.
Next, both side panels are pressed by the clamps and through the conductor consistently drilled all the holes for the connecting bolts.
The conductor is assembled from two slats in a kind of rassini. Along the axis of the holes is applied the risk that when setting the conductor on the panel aligned with the notch on the panel. The conductor is fixed on the details of a couple of small nails.
Holes for M6 nut in the cross members and shelves is also desirable to drill the conductor. The latter is bent from steel strip section 20×2 mm, after which the resulting area are two holes in lower shelf is 6 mm in diameter (it is fixed guide screw), and a larger — diameter 0,5 mm less than size of “turnkey” used nuts with M6 thread. Typically, such nuts the size of “turnkey” is 10 mm, respectively, the hole diameter of the nut is equal to 9.5 mm.
Assembly Secretary — that, in fact, the connection bolts M6 side panels with shelves and crossbars. Previously in the last zapressovyvajutsja nuts and centered relative to the holes 6 mm in diameter at the ends of the shelves and cross-beams by means of a rod with pointed end. After completion of the Assembly the geometry of the design is carefully checked with a tape measure, for this the Secretary laid face down on the floor and he measured diagonally. If they are equal in size, to the rear of the Cabinet (side panels, shelves and crossbars) small screws and glue (casein, Phili “liquid nails”) is attached a sheet of hardboard with a thickness of 5 mm.
Width of Desk is large enough workshop to 1.2 m, so the shelves particleboard can SAG. To avoid this, it makes sense to strengthen them with wooden strips section mm. 35×25 Reiki these, moreover, will not allow tools and materials to fall from the shelves.
The next step is hanging doors and countertops. The first set by standard furniture hinges providing fixing of doors both in open and in closed position. But the top connects to the crossmember reinforced hinges, as the hinge nodes will have to experience increased load. It is best to use three or four Vostochnye loop with the size of 60×40 mm. card to Mount them to the top and the crossmember you can, of course, the usual screws, but it is better to buy the plastic dowels with a diameter of 5 mm to extrude them in detail in drilled holes and then drive the dowel screws. The fact that the screws are badly kept in the CPD and at the slightest axial loads fly from their nests.
As can be seen from the drawings, the door of the lower branch of the Secretary-workshop were the pillars of the tabletop when the latter is in the horizontal position. The load from her and settling down on her hard tool was perceived not flimsy furniture hinges and is transmitted to the floor, doors are equipped with swivel feet of wooden bars, which are fixed both in the working and in the retracted position of the bolt with a spherical head and the wing nut. And to open the doors accidentally slammed shut, they are fixed metal pins-FIC-story with a diameter of 6 mm, and the top drilled holes, which are enhanced with metal or plastic bushings with an inner diameter of 6.5 mm.
It remains to equip the Secretary with four screw jacks, and work on its Assembly will be completed. As can be seen from the figure, the Jack is arranged almost in the same way as the docking station, soedinyayutsya shelves-crossmember with the side panels. The only difference in the diameter of the bolt and nut for jacks, you will need fasteners with thread M8 or M10. During the installation of the Secretary under the bolt head goes on the back of sheet rubber of a thickness of 2-3 mm.
If particle Board was not lined with plastic, the easiest way to decorate their adhesive foil, picking up its texture under the surrounding furniture. The ends of the pre-panels are puttied, sanded and painted small the right color.
On the table is fixed a sheet of 6 mm plywood: practice shows that the surface of the workbench in the workshop deteriorates quickly enough, well, plywood panel, if necessary, can always be replaced.
Compartment in the middle of the writing table set Desk lamp or fluorescent light lamp and single socket.
I. EVSTRATOV