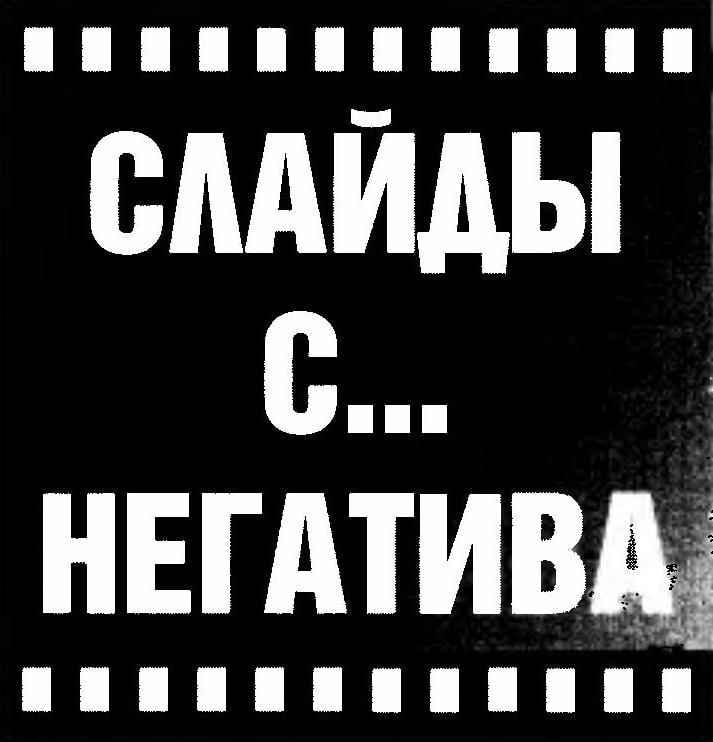 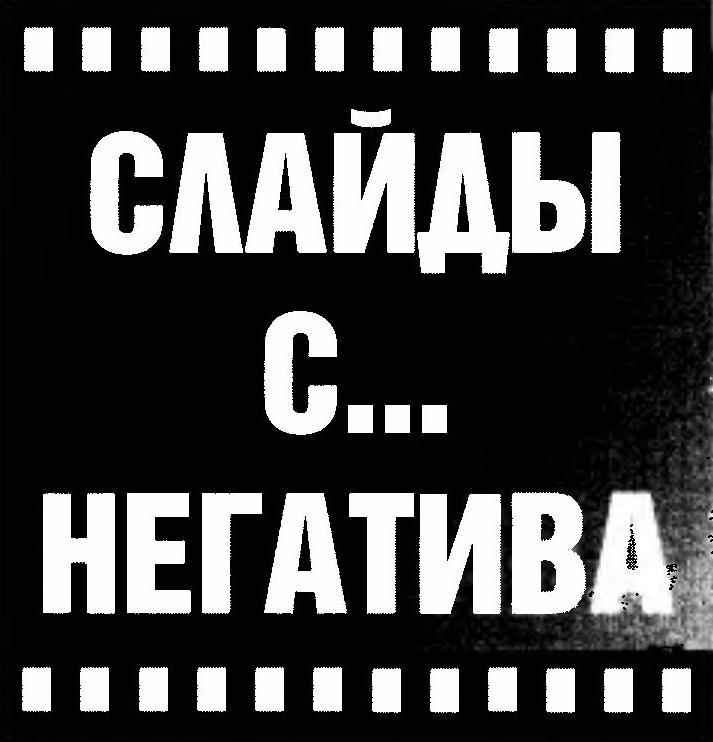 Affordable and easy to use automatic cameras-“soap” can make any person a photographer. The presence everywhere for the service of photographers specialized items the most famous foreign firms (it is a pity that Russian is not among them) makes it easy and relatively inexpensive within an hour or two to obtain beautiful colored glossy pictures. Camera instant shooting reduce the process of getting photos to a few seconds.

But at the same time, from the shelves of these shops have virtually disappeared color positive films, which were once very popular transparencies (slides). But, for sure, many remained and slide projectors need to be bright with a juicy palette of colors frames against the light, and projectors, giving you the opportunity to get pictures with these shots on the big screen. And sometimes you want to add to my photo library at least a few new slides, so that after some time if you want, looking in the window diascope or projecting onto a screen using the overhead projector, slowly, carefully to consider the captured image. Besides, some people slides needed for professional work.

So how can that be? It turns out, can be relatively easy and simple to shown color negative film not only photographic prints, but also slides. I did so. Earlier the film, which was intended to produce slides, cut to 18 frames (not more). Opened the back cover of the camera, put the tape in the camera so that the first negative coincided with the personnel window, and made a cut mark in the hole of the perforation, which appeared on the tooth on the drive roller when the cocked shutter. This will help in the subsequent charging blindly.
Further operations were performed in the dark. Took netshadow negative film, put it on the manifest (the latter should be placed inside the chamber between natsreti and photostorm), aligning their start. Put both ends of the films at the same time in the take-up spool of the camera and fingers pulled her to the place, while the notched hole of the perforation of the film (label) is not formed on the tooth cocked the shutter, and hence the first picture shown earlier the film negatives again coincided with the personnel window.

Then gently pulled neotsenimuyu the tape from the cassette so much that it became a bit longer than shown in the film (it is easy to identify by touch), and cut off its lid open, camera. Then hit the road to both the film into a compact roll and put it (without the coil) in case blank cassette tape still in the dark inserted in the machine and closed the lid. After filling their films were shot outdoors in good daylight. 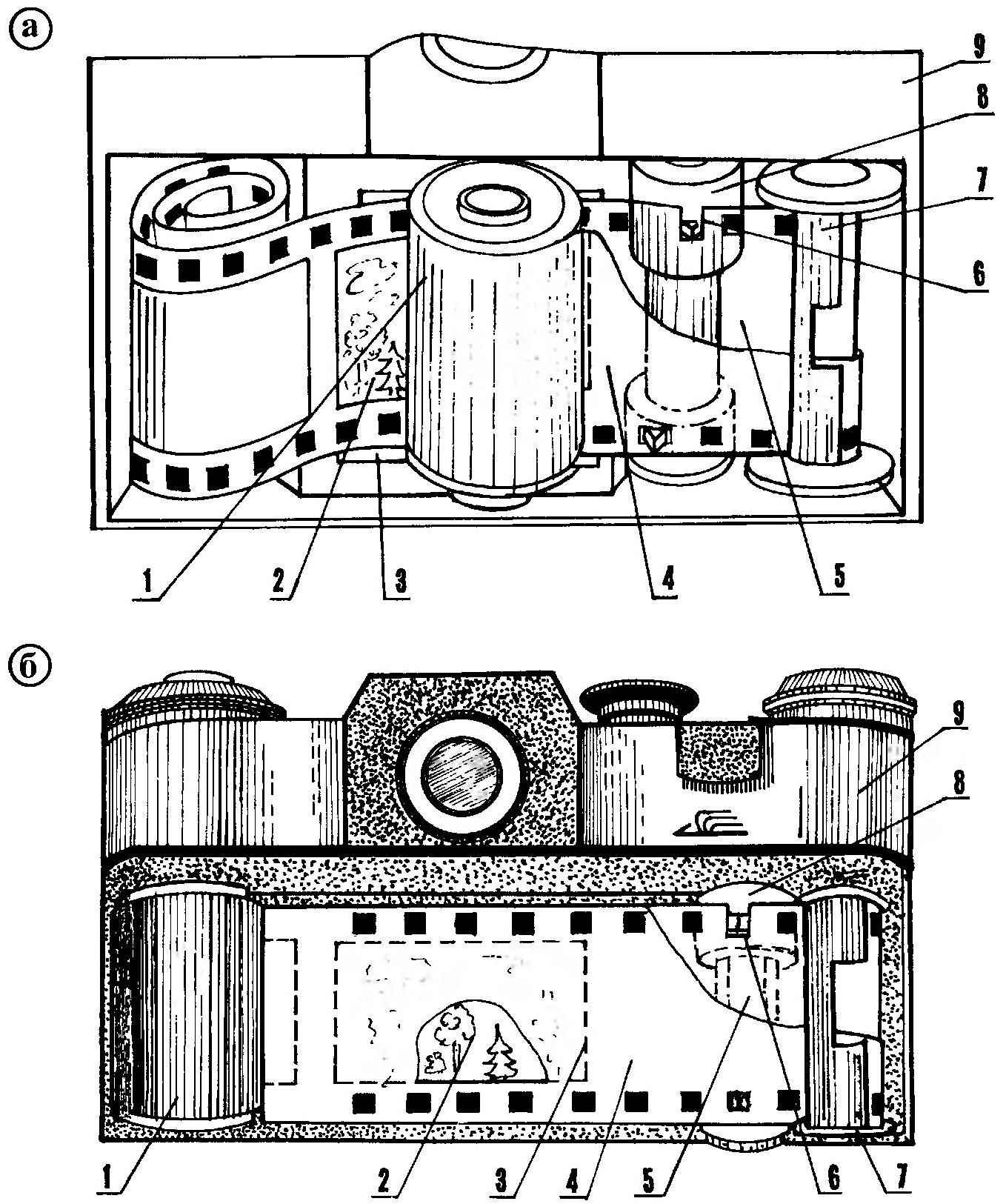 Exposure for the unexposed film was determined as usual. And photographed white screen sheet of drawing paper (sheet) located at a distance of about 1 m from the unit (distance scale of the lens set at infinity). White light passing through a lens having a negative, gave to the second film contrast positive latent image, which was designated after the usual negative manifestations. Since films in the cassette are free and can move relative to each other when unwinding and rewinding, no open perforations in the tapes has not happened. Leading toothed roller to ensure reliable simultaneous and uniform rewind both tapes.

After exposure of all the desired frames both tapes were removed (again in the dark) from the machine and carefully cut the line. Exposed-manifested neatly rewound on the reel of the cassette and inserted into the housing. A tape in the cassette is given to developing a specialist photo lab.

The described method was tested on the “Zenit-12”. With a slight specific adjustments it can be applicable on other models.

As can be seen, the method is relatively simple, allows you to use regular camera without any accessories. The disadvantage is the impossibility of selective print frames with no gaps in the exhibited film, which however, may in the future be able to resolve.