Cockroaches: they were not done by people to get rid of these black and red rogues, but the Extermination of such resilient insect still is a problem. Especially for the residents of densely populated high-rise buildings, dormitories and dilapidated “hruschob”. To a very promising means of control of cockroaches is possible, in my opinion, to include electroshock devices, even of the simplest type. I, in particular, has been a “electrovoice” to exterminate an entire Armada Ryuusei insects at the entrance directed to the former owner of the apartment.

Such a well-proven antityrosine the device is assembled on a plate of dried wood. Sizes are based on the purpose and ease of operation. In the hollows out a plaque on the perimeter, with a 15 mm deviation from the edge, the groove width of 4-5 and a depth of 2-3 mm. Along it, at a distance of 0.2 mm from each other, are attached (7-mm nails or with the use of repellent cockroaches do not glue) the inner and outer contours of the electrodes, soldered strips of tin. It is desirable that the formed discharge gap passed over the middle groove.
The contours of the electrodes of the rectified high voltage. It is obtained by the so-called scheme of the Latour to be included in the outlet. The current pulses passing through the diode VD1 during halfcycles of the applied voltage of the same sign, charge the capacitor C1 to almost 300 V. the half cycle of opposite sign charged C2 (via VD2). Since both of the capacitor relative to the load of the rectifier are connected to each other in series, the output of the device is obtained, the total (with equality C1 and C2 double) voltage. 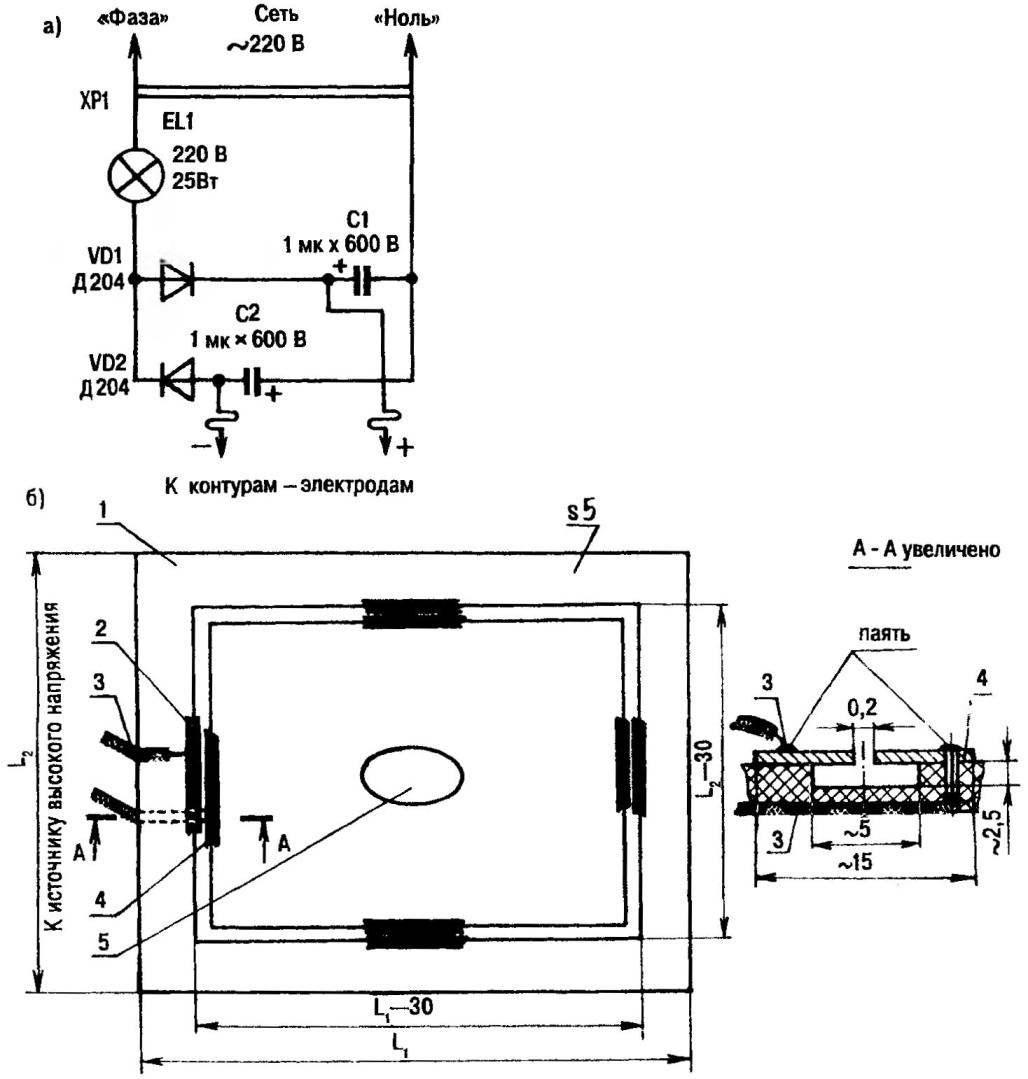 A circuit diagram of a high voltage rectifier (a) and fed it an electroshock device for the destruction of cockroaches (b):
1 —plate-base; 2,4 — circuits-electrodes (tin s0,2); 3 — provodnika-volt (2 PCs); 5 — bait; dimensions L1 and L2 in place; fastening parts 2 and 4 conventionally not shown.
In the middle of the plates-a base is placed odorous bait attractive to the beetles smell (2— 3 drops of vegetable oil or powdered bouillon cube), aspiring to which, the cockroaches trying to crawl the gap between the contours of the electrodes and are affected by electric current. Bulb is for quick extinguishing volt arc, overlapping sometimes the most crafty insects and to prevent damage to the parts diagrams in case of accidental short circuits. Eyeliner high voltage wires to the internal circuit, the electrode is performed through the through hole in the plate so that the roaches cannot penetrate the odorous bait, bypassing the clearance for them with deadly voltage. The groove is the same as practice shows, completely eliminates any background to the fire.
Warning: when using electrical treskovaja the device should provide reliable protection of people and animals from even accidental touching of parts under high voltage!
G. POGUDIN, H in o in o th, the Perm region.