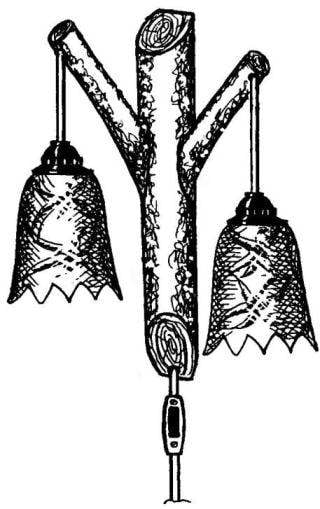 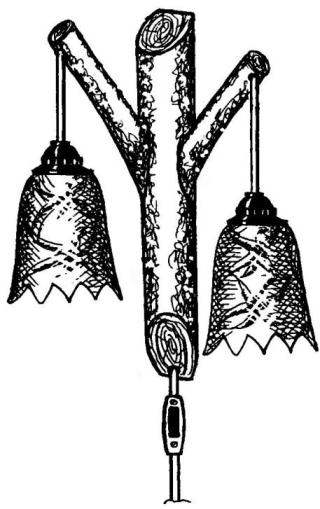 When the country house was built and the time of wiring, we, on reflection, abandoned the ceiling lights, because the chandelier is not looked very good in rooms with low ceilings. Instead, it was decided to use local lighting placed above the tables, armchairs and headboards wall or ceiling sconce. It was first supposed to buy them in the store, but “urban” bra wildly looked on the walls of the lining. Had to come up with something different.

While walking through the woods I came across a wind-thrown pine. And because my thoughts revolved around the holiday lamps, the trunk of the tree protruding from it in all directions branches seemed the best preparation for a country sconces.

I ran for a hacksaw, sawed from the trunks of a dozen sections — it was a good semi reason for the suspension of lamps. In some sections there was only one sticking up bitch, some two, some three. On this basis it was decided to make the three-, two – and odnorazovye sconce.

The work on development of the grounds was easy. I etesal axe back side of the base and Astragal her plane, after which fine teeth a saw and cut off the stem and knots in accordance with the comfortable for hanging ceiling sizes. Further, the end grain was sanded and the entire base double-coated with varnish. 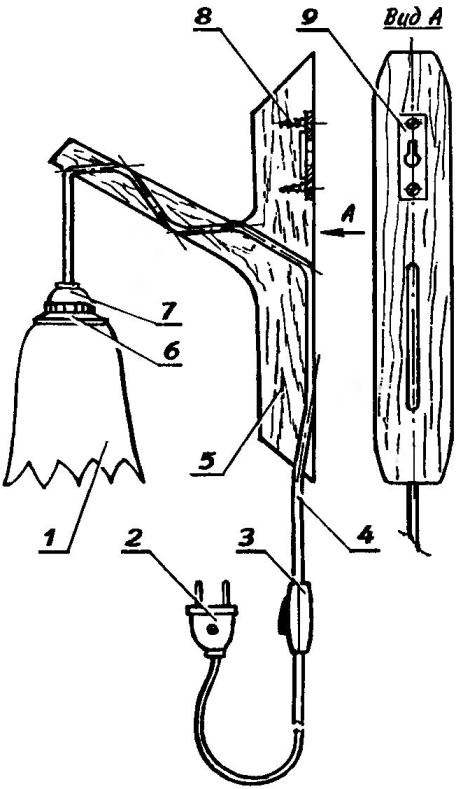 The most difficult was to make the hidden wiring inside the base of the sconce. I tested several options — hollowed out groove on the invisible bitch-bracket, tried to burn a hot wire through hole… However, the most effective method turned out to be the firmware of the bracket using a conventional drill and drill sloping holes as shown in the figure. The wire peeking out only one or two grooves on the bitch of the bracket. After final Assembly of the lamp these process slots, I taped pieces of pine bark.

For each of the sconces had to buy matching shades, chucks with nuts to fasten them, lock switch, a plug and two wire multi-strand cord. The installation of this equipment has not caused any difficulties. The only thing that had to provide additionally, it is a knot on the cord on his site, which is within the Cup of the cartridge. The knot necessary for a cartridge with a lamp and a lamp hung not on the current-carrying veins-conductors and cord.