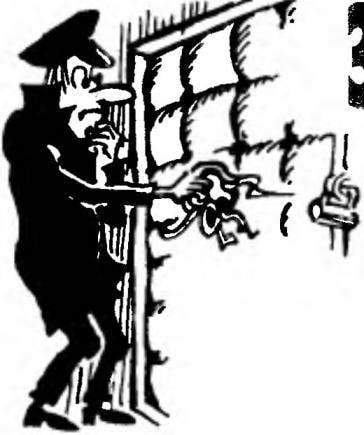 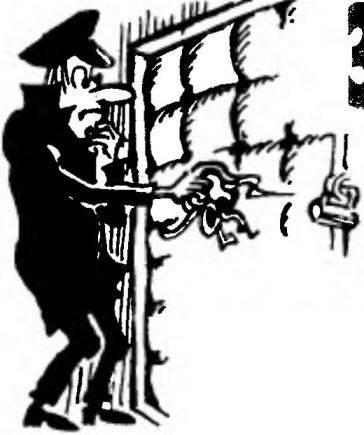 Externally, this padlock is no different from thousands of his fellows, keepers of the storerooms and garden sheds and utility rooms, stores and warehouses. Dumbfounded except for one detail: it opens… with a screwdriver. Is it possible to trust such a frivolous device, to unlock which can even mischievous boy? “It is possible, — says its Creator engineer I. Yankin. — Open my castle, not even professional burglar, although the key is really little and thin as a knitting needle, screwdriver. The secret is not in the key, and in the castle!”

In this statement there is no doubt, as have I. Yankina designing these “cunning” locks old hobby, and he has a great experience of their creation. One of their developments — lock with a smooth set of code available for the manufacture of their own, the author has kindly agreed to share with the readers Club home of the masters.
Someone will say: why to make the lock when it is easier to buy a ready factory? But even the most good of them, the attackers pick up the keys, and even a secret code with fixed intermediate provisions of the mechanism, work on hearing and touch. And in the winter a common problem: mechanisms to factory locks freeze so that it takes them to warm.
But everyone would like to have a locking device, devoid of these shortcomings, by the same “tricky”, defies the skeleton key.
developed a series of such suspension code locks for various purposes. Their highlight is structurally guaranteed protection not only on the selection of the code, but the reversing of the handles of these locks with a crowbar.
The following is a description of the construction of the castle and technological features of manufacture of its parts and accessories. I’m not afraid to reveal them because conventional secrecy devices with these sizes and design diagram may have more than four thousand code combinations. 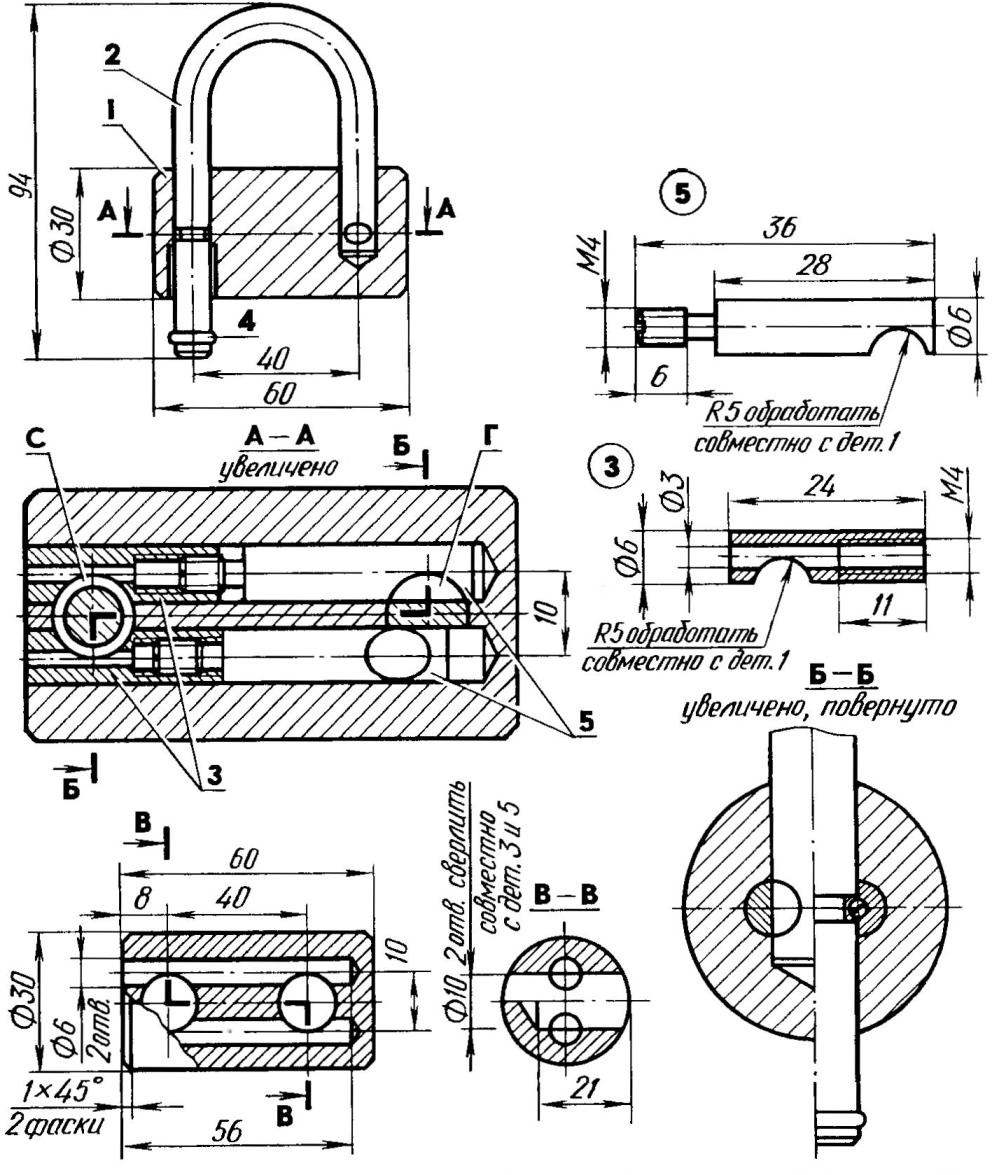 Combination padlock:
1 — body (duralumin, bronze, brass); 2 — shackle (steel 40X, rod Ø10): 3 — bushing (bronze); 4 — retaining ring (steel, wire Ø2. 5); 5 —pin (steel 40X, 2 PCs.).
Device
The lock has a housing, a shackle, two bushings, retaining ring and two pins. Sleeve fixed in the housing retractable handle member of semi-circular slots sleeves. In the latest screw-rotating the pins, moving in holes in the housing and acting as locking elements. On the cylindrical surface of the pins also has semicircular grooves which are at a certain position in the sleeves coincide with a blind hole in the housing under the handle of the lock — this corresponds to the “open” position: the handle freely inserted into the lock body until it stops. If you now enter the key-screwdriver, it enters the slot of the pin; when rotating the pin in its cylindrical part included in the groove catches and ban it. Code for opening will be the location of the groove on the pin and the number of turns of the key. To increase the secrecy of the castle is the second pin with your code.
The mechanical strength of such a node in the hacking surely much higher than in most constructions in which the handle is fixed with a bolt of small cross section is the weakest part. Will not be able to pick up a lock code and “touch”, as at the time of opening the key is in the groove of the arch does not feel — if she’s free from locking elements?
Through hole to the long end of the arms reamed from the bottom to the diameter of the snap ring, not allowing her to come out of the body, which would lead to the disruption of the Assembly of the castle.
Manufacturer
We offer castle, as already noted, is not only particularly strong .but delicate mechanism. However, since we orientirueshsya not on a factory for its manufacture, lower in the drawings tolerances and planting: the required accuracy can be achieved through joint working and fitting of parts, readily available for the modest home workshop craftsmen.
At the beginning of round steel rod with a diameter of 10 mm cut blank length 162 mm for the arms. It will chamfer the two bore, then bend the shackle (any arm or lug welded to the end of the nut).
Carved two bushings (made of bronze) and two pins (steel) and rod lock case (made of aluminum, bronze, brass). In the workpiece drill two holes 6 mm in diameter under the sleeve, holding it in the Chuck of a lathe with an eccentricity of 5 mm. Then, by inserting the bushings flush, at a distance of 8 mm from the end, drill a through hole With a diameter of 10 mm — long end of the shackle. Marking sleeve “right” and “left” will get them out of the housing.
Next, insert the long end of the bow at the prepared for him a hole in the hull, giving the possibility of a short against the case; note that location (as the center of the blind hole “G”) and measure the distance “a” will bring up to 6 mm, grinding off the short end of the headband.
Now screw the pins into bushings at first until it stops, and then turn them at an arbitrary distance (but less than 4 mm) and insert the bushings into the appropriate holes according to the marked “left” and “right”. Fix the long end of the shackle through hole, and then drill through the housing parallel to the previously set blind hole “D” of 10 mm diameter to a depth of 21 mm. For the control will enter the short end of the shackle and, if necessary, will modify. 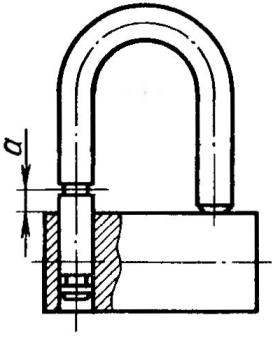 The markup of a blind hole. 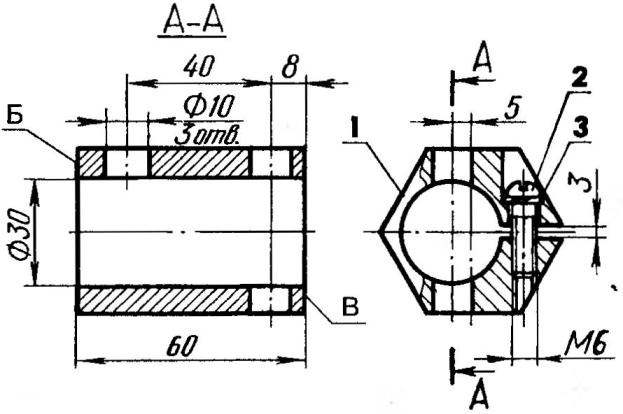 The conductor-bar:
1 — body (steel, hexagon 46…65); 2 — screw M6 (2 pieces); 3 — spring washer (2 PCs).
Again examine all the details — will have to saw through the saw blade blade (soshlifovat divorce) slots in the ends of the threaded parts of the pins (under the screwdriver-key). For convenience, the initial position of the splines should be the same. Again, collect the castle, but without introducing into the housing the short end of the headband; compatible groove at its long end with the holes on the bushings. Screwdriver with a shaft diameter of 3 mm through the holes in the bushings will check the freedom of the axial movement of the pins; if necessary, the pins podshlifovat.
The subsequent actions are focused directly on the create a passcode lock. Will screw one of the pins until it stops, then turn it to align groove with the hole in the hull, counting the number of half-turns. Write the resulting number — this will be the code dunnage pin corresponding to the “open” position. Will do at the end of the body (sleeve) and the screwdriver-Kuche label to unlock the lock.
check repeat overtly key blindly, counting to himself the code number of half-turns for a given pin, and governed if necessary a screwdriver to align the labels.
Repeat completely the same operations to create and validate code for the second pin. Then pull the shackle out of the housing and drilled a through hole in the bottom to 12 mm at a depth of 10 mm.
Execute on the short end of the shackle of semi-circular grooves. To avoid being overwhelmed by the shackle hacksaw attacker, temper it, and if possible exigiram the shackle and the casing from corrosion.
Now you can finally assemble the lock and install in groove on the long end of the arch wire retaining ring, optochin him to free passage into the prepared hole.
In the manufacture of several of such locks, it is advisable to use a universal jig the mandrel, excluding the markup. In this case, the workpiece housing of the lock box in the jig with the help of prolonged M6 screws and install into the Chuck of the lathe end “B”. By the end of the lathe drill a hole with a diameter of 6 mm to a depth of 56 mm; then the conductor will turn in latrine of the machine 180° and repeat the operation. Setting it in the hole of the bushing with the pins, drill out without removing the workpiece from the conductor, two holes 10 mm in diameter: one end-to-end, and another at a depth of 21 mm. as for Assembly, adjustment and finishing operations, they are the same as for a single manufacturer.
I. YANKIN, engineer,
Baikonur,
Kazakhstan