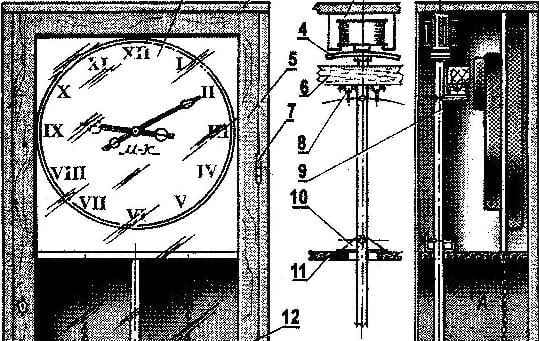 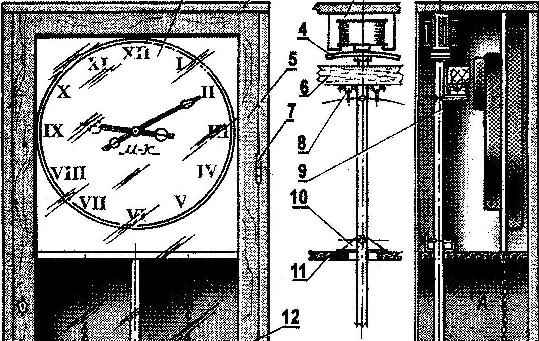 In other houses they are — big old clock in the wardrobe of polished red wood, with pendulum and two big shiny weights on chains. In those hours, something mysterious is through them as if time itself speaks to us about the past and about the present and about the future…
About the clock with the pendulum I dreamed a long time ago, but the legacy of second cousins grandmothers, they somehow did not get, and the Commission they asked for the money, which could buy quite a decent car such as the VAZ.

But once in the store I caught the eye of an ordinary digital watch and with such a dial, which I saw in my dreams. Without thinking, I bought them — they cost is not expensive. Bought because thought instantly came, they watches, of which I so long dreamed of and which differed only from the e-Cabinet with glazed door and rhythmically swinging pendulum. But the wardrobe and the pendulum I will try to do it myself!

The housing for the clock came from an old bookshelf — I spill it lengthwise into two unequal parts, the smaller one with a width of 120 mm became the basis of the Cabinet. Well, from the plates remaining after this surgery, I cut out blanks for the door, glued them with epoxy resin and glazed. By the way, for fixing the glass it came W-shaped plastic profile — this is usually used to install engines in cabinets and bookshelves, but he was well replaced glazing beads when glazing a door.

The greatest difficulty caused voeroesmarty pendulum mechanism. Of course, it would be possible to design a real pendulum that specifies the precision of the electronic clock, but to create such a complex device had no reason to, and I have developed a much simpler Electromechanical device that simulates the motion of the pendulum.

The pendulum consists of a rod made of polished duralumin tube with a diameter of 12×1 mm with suspension point on the line that divides it in the ratio 1:2. The hinge suspension is a steel bracket screwed into it with two M5 set screws with conical end portions. In the rod of the pendulum are drilled, respectively, two cylindrical holes with a diameter of 2 mm. At the bottom of the pendulum is fixed an ornamental disk and the load is first made of the CD and the second steel strip. If necessary, increasing or decreasing the load, it is possible to change the oscillation frequency of the pendulum. 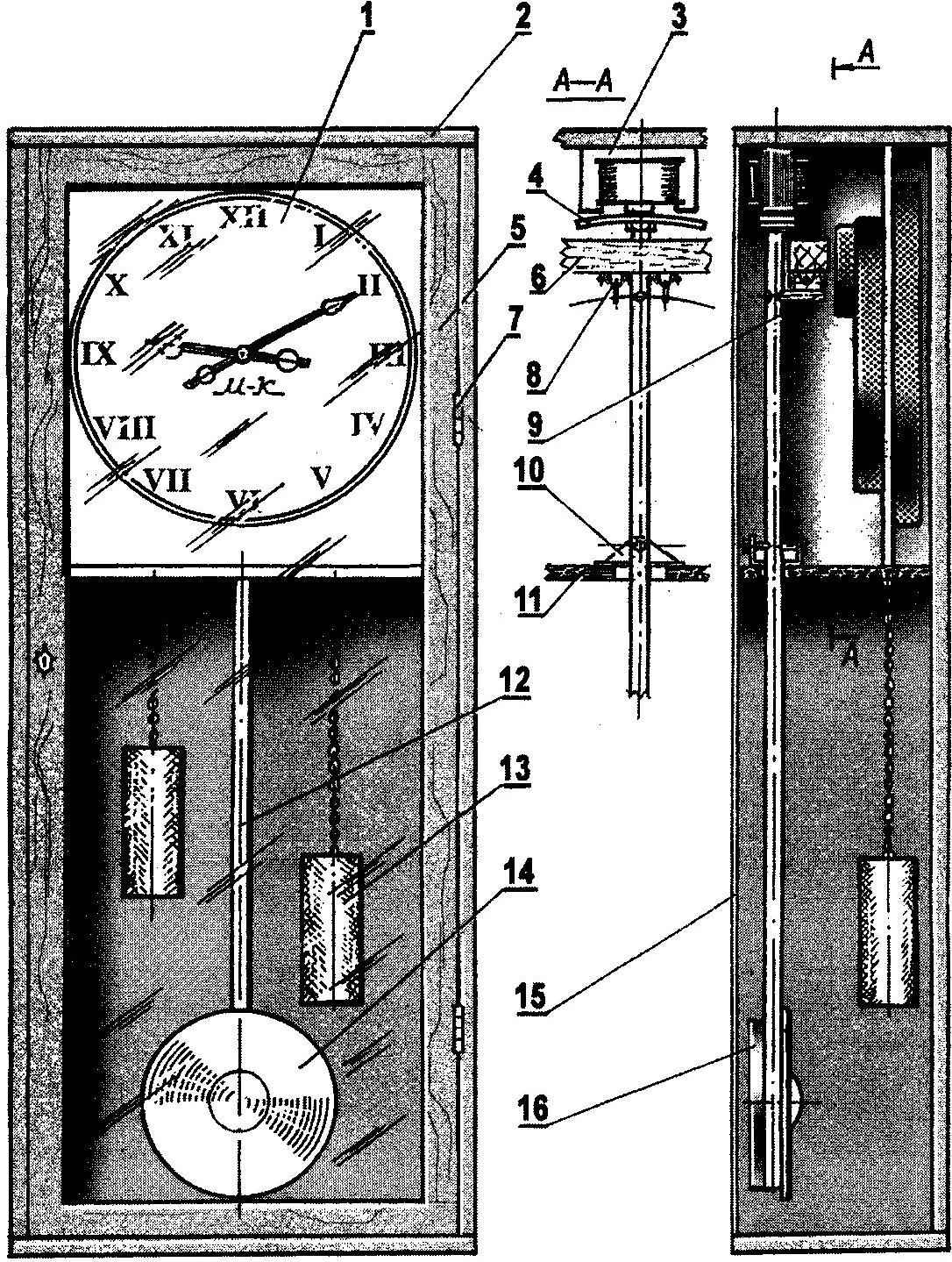 The device is homemade and old pendulum clock: 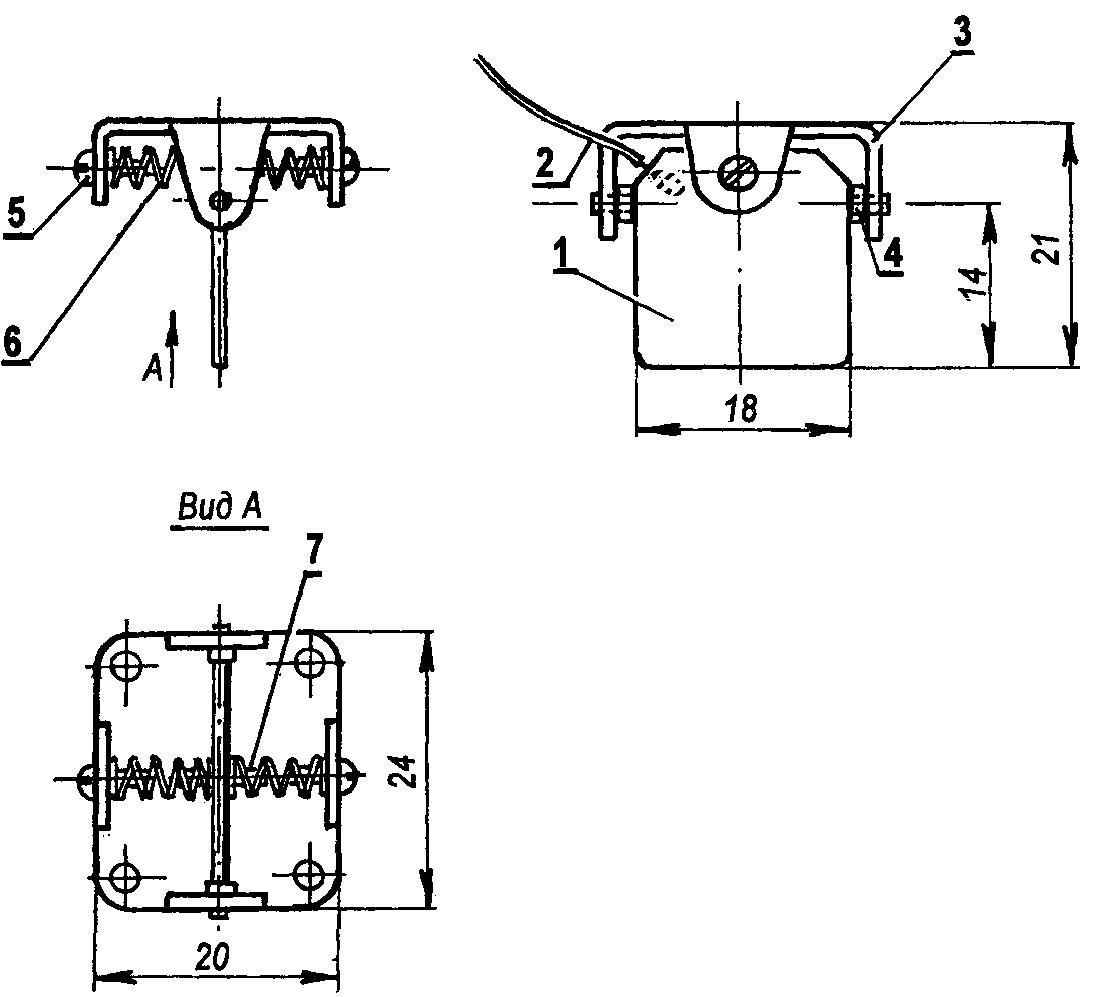 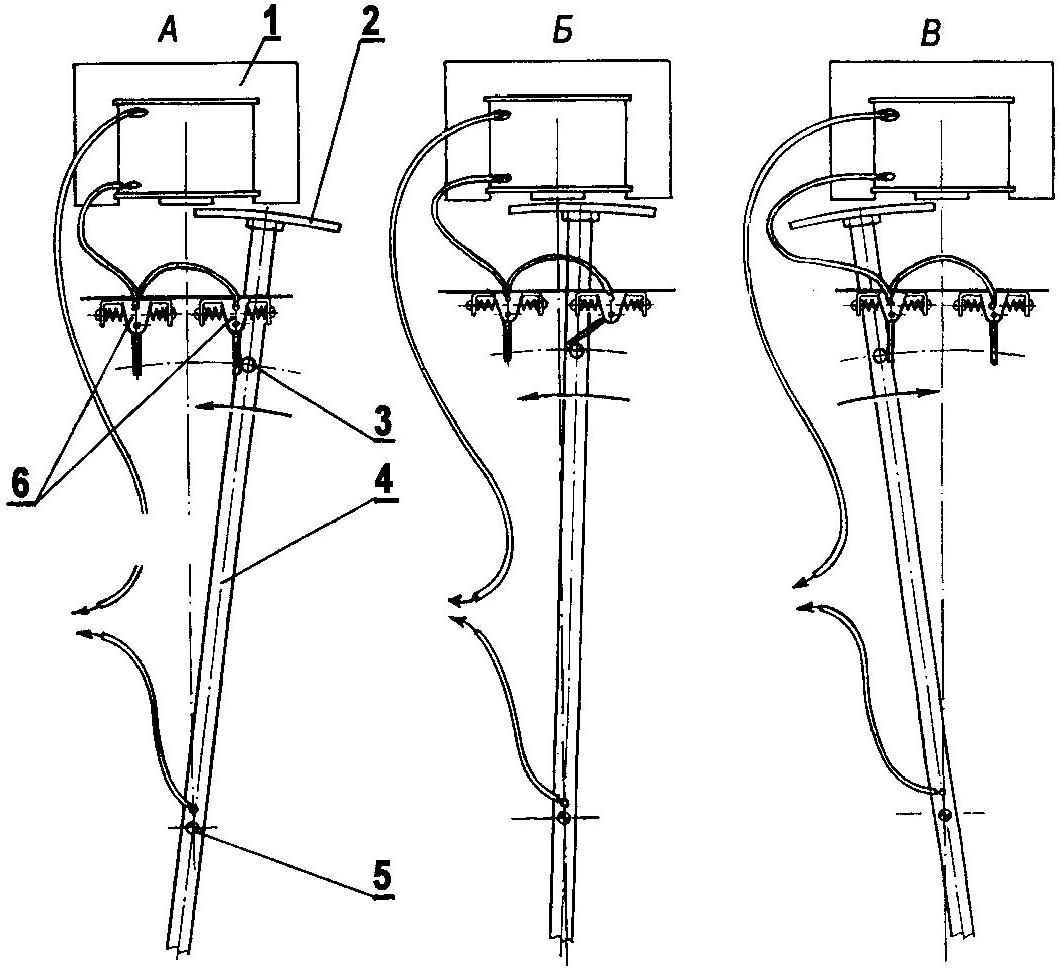 The scheme of commutation of electromagnet:

The numbers on the diagram marked with:

In the upper part of the rod specimen of the fixed anchor will require a strip of soft (annealed) steel with a thickness of 4 mm For fastening it to the rod in the hole drilled in anchor, threaded М12х0,5 mm.

The “engine” of the pendulum is the solenoid — you can do it from the output of the transformer and choke from an old tube receiver, or PA speaker. You only need to touch its core, consisting of the basic W-shaped and rectangular guard plates, the latter should be removed (for solenoid they don’t need), and the first to lay down a new core in the form of the large letter “W”. The coil will need rewinding in accordance with the magnitude of the current, which can ensure the source, for example a charger for a mobile phone. Experience has shown that when using a DC source voltage of 5 V is fine coil of wire of PE with a diameter of 0.3 mm by winding it in bulk to fill the frame. By the way, to the winding with hand drill fixed table vise. The frame will have to fix on threaded rod with two pairs of washers and nuts, and the rod in the Chuck of a drill.

Unfortunately, with just one electromagnet to propel a pendulum will fail — you will need two of the switch closing solenoid only in those moments when the anchor pendulum moving in his direction.

Each switch consists of a contact of a petal made from one-sided glass epoxy. Petal is hinged in the duralumin case and is held in vertical position by a pair of springs.

Build a pendulum mechanism is not difficult. The main thing here is to provide the minimum clearance between the armature and the electromagnet (about 0.5 mm) and adjust the position of the contact petals of the switch relative to the contactor. To bring the pendulum in motion, it is enough just to swing.

The watch will be indistinguishable from real vintage pendulum if the glass doors are suspended on chains for two “weights” is to make them the easiest of scraps of dural pipes that need to be polished to a mirror Shine.

In addition, the accuracy of the perception of hours will greatly wliat careful finish of the body.