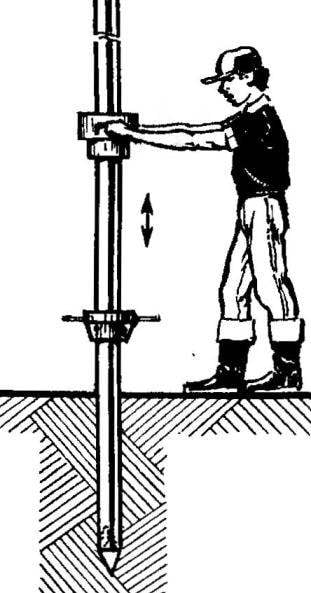 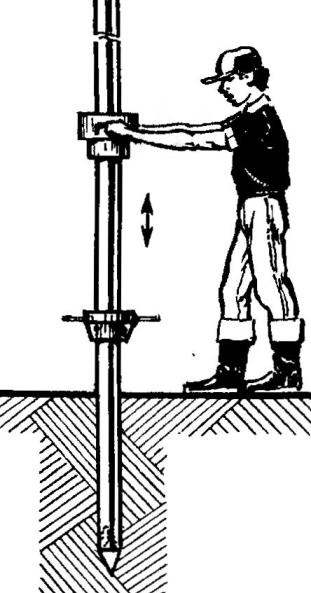 Reading the tips in the magazine, I decided to share my way of deepening pipes for water column-the pump and install the bars of the fence on a country or garden site. With the help of a simple device consisting of two coupling halves and drummer, playing the role of the pile of “baby”, it is possible to bury the pipe with a diameter of 50 mm to a depth of 8 m. All work will be easily fulfilled by one person.

The pipe that you want to hammer into the ground, put a metal drummer weighing 10— 15 kg with an axial hole of 5-10 mm more than the pipe diameter and two handles on the sides.
Then, at a distance of about 1 m from the tip of the pipe with the bolts tightly clamp coupling, consisting of two halves. Together with this snap-in pipe installed in a vertical position. Taking the drummer for the handle, raise it on the pipe as a guide, and then sharply lowered. As a result of the blow pipe is pressed into the ground. To the coupling welded their handles that crank pipe, to avoid being stuck in the ground. 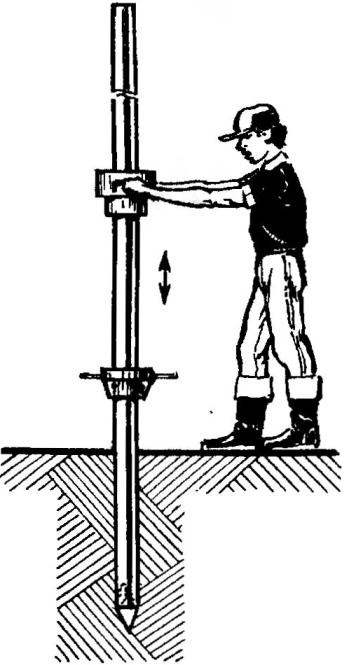 So bury the pipe.

Drum set:
1 — end pipe; 2 — pipe; 3 — coupler; 4 — handle cap; 5 — bolt; 6 — the drummer; 7 —the handle of the hammer.
So bury the pipe to the coupling. Then the clutch is raised to 1 m, again tighten the bolts and continue to beat until then, until the pipe enters the ground at the desired depth.
M. CHEMERINSKY,
S. Yamnytsia,
Ukraine