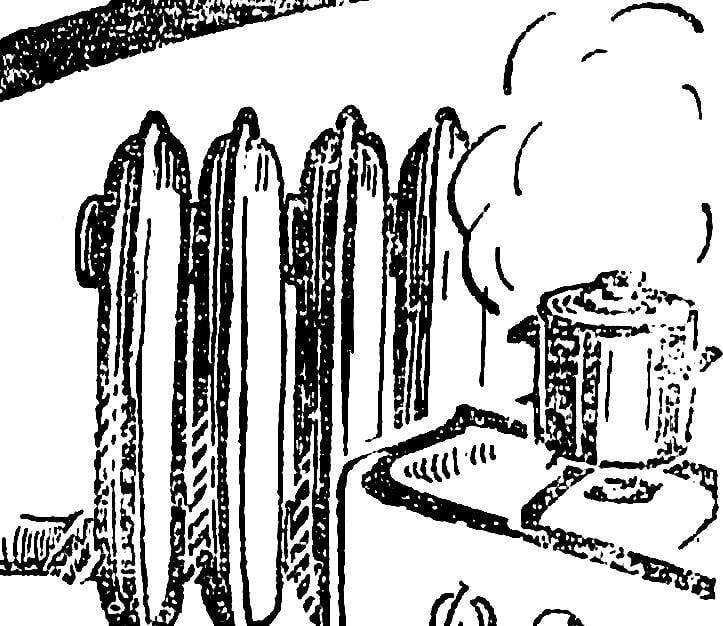 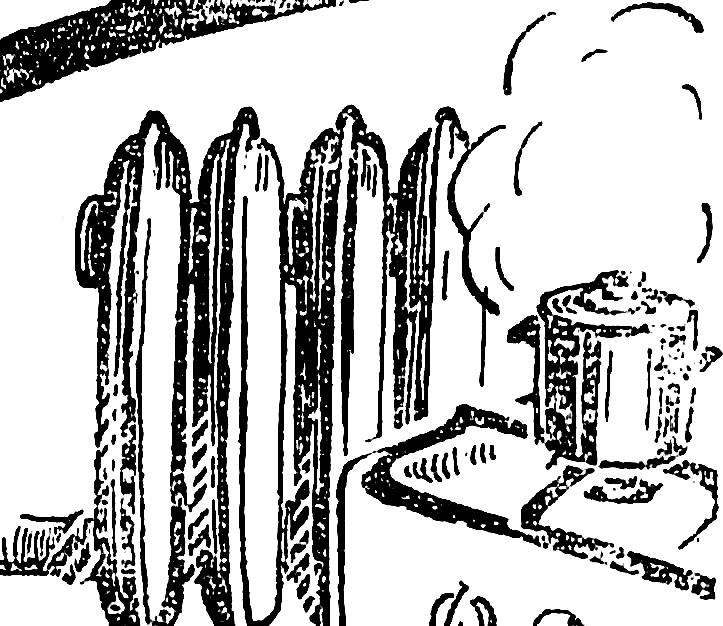 The editors have received many letters on the publication of “Biogas: and warms, and cooks” (see “M-K” № 1, 1987), based on the materials of the Romanian journal “Technium”. Of readers was attracted by the subject and documented in the design. Many are interested in the details of the devices bostanova, asking how to make the individual nodes. Further clarification and recommendations for possible solutions to the structural elements gives our consultant engineer P. Zach.

Readers first of all the question arises regarding the harmonization of the existing needs with the size of the installation. So many people write: the size of the house, say, 5X6 m (or volume, for example, 150 m3), the family — 4 people, it is necessary to warm up and the kitchen to provide; what size is required?
Experience to date suggests that, on average, for heating the building area of 40-50 m2 and chetyrehkantnomu plate is required per hour 3.0—3.5 m3 of biogas. When equipped with local heating system can be used widely used automated heating gas boiler AOGV-11, 3-3.
An important factor in determining the intensity of gassing — the process temperature. We should not forget that in the article “Biogas: and warms, and cooks,” describes the experience related to a country with a fairly mild climate. Apparently, for the more severe climatic conditions display more necessary, perhaps even in a steady process. But if you include the heating, it seems reasonable to use it as an effective regulatory factor, which can increase the gas several times. (Another controlling factor — stirring — say next.)
Now, given the joint influence of these factors on the capacity of the plant, we can give some recommendations.
When choosing the size of the fermenter can be guided to the options given in the last publication; subject to harsher climates it is necessary to add in the installation of a heating element, for example, in a coil. Trials will soon reveal the influence of heating on the device performance. To organize the finishing work is recommended to have a notebook (instead of relying on memory) and record all changes of both the input and get. Practice shows that every 10° of additional heating biomass dual gas output from the 1 m3 fermenter.
Here is some data for those who are going to engage in the design of the installation. From 1 ton of raw material receiving 80— 100 m2 gas. Its calorific value of about 5500— 6000 kcal/m3. In comparison, natural gas is not much high-calorie — a total of 7000 kcal/m3.
Now about the biology of the process. Latanoprosta bacteria are in the raw materials. The culture of developing in the fermenter for up to three weeks until the mass begins to emit gas. When ready to use “leaven” of the previous portion of the already working fermenter start date of gas generation is reduced to about weeks.
Metanoproizvodyaschie bacteria are divided into three groups. Psychrophilic work effectively in a range of +5 to+20°. With further increase in temperature to develop mesophilic bacteria, their working range is +30…+42°. And at even higher temperature manifests the action of thermophilic bacteria, which work in a very narrow range of +54 to+56°.
A large number of issues related to the design of the installation, first of all — creating the possibility of periodic refueling of raw materials and mixing of the biomass without opening bell. First of all I must say that the uninterrupted production of gas can be obtained by duplication facilities. With two fermenters at their alternate recharge possible to dispense with the complication of the design.
Therefore, the future Creator of installations for the production of biogas should be compared with respect to its capabilities, three schemes: the simplest periodic refilling; paired protozoa, with alternate refilling; with a special device that provides a continuous supply of gas.
Selecting the third scheme, we must bear in mind that for the digester is required not only to refuel in raw materials and waste disposal.
In the latter scheme, the refueling of raw materials and disposal of waste is not equal in periodicity. So, waste management can be combined with stopping the process for cleaning and inspection system. As for refueling, it is more often and is easier: every day is removed from the bottom 1/10 volume on top and added the same amount of fresh materials.
One possible way of refueling the fermenter without gas losses based on the so-called principle of communicating vessels. To do this, near the pit of the digester is arranged a small gas container, connected to a pipe located below the liquid level (Fig. 1). Tubing made from a piece of ceramic or asbestos sewer pipes, which build into the walls of containers. Such a system is itself a liquid gas gate. To improve the efficiency of feed concentrate, you can use plug-funnel of the hopper (Fig. 1A). Push the middle through the pipeline and the simplest mesh piston. At the same time it is used as a damper preventing samoperedelny biomass between the two vessels. 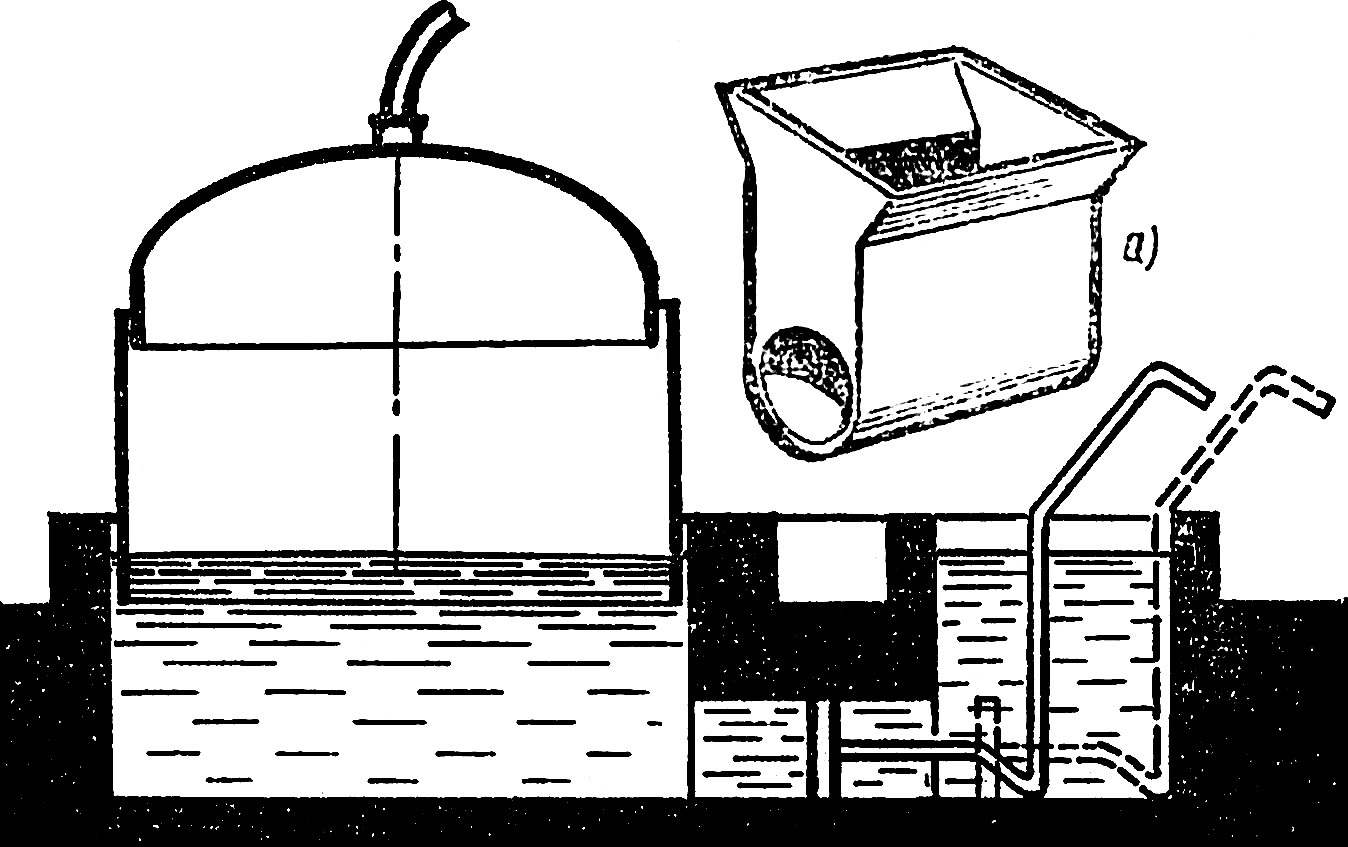 Fig. 1.
Lots of issues is the need for periodic mixing of the biomass. How to perform this operation without opening? Not everyone is aware of the possibility of her samoperemeshivaniya. Remember the effect of convection can be seen in the room when some fluff is over a radiator, floats up, falls at the opposite wall and again enjoys the air flow to the radiator. The effect of the heat circulation medium is easy to obtain and in the fermenter, if you place in the lower part of the heating pipes (coil), relegating them to one edge; convection will provide semipermissive. At the beginning of the process of gassing add to this the effect of the rise of gas bubbles in the zone located above the heater.
Easy to do and mechanical agitator biomass. It is particularly useful in areas with a mild climate, where there is no need to use heating. As practice shows, it is better to provide in advance. After all, if the system will go on heating, then why on earth waste the energy on mixing. In addition, it is not necessary to stir the mass continually. You can do this periodically, e.g. morning and evening. It should even turn this operation into an additional, adjusting. It is enough to follow the movement of the bell: as soon as it drops to the lower level (small supply of gas), it is necessary to mix the biomass and the release of gas immediately increases.
The simplest mixer is easy to make in the form of the impeller drive flexible connections through the same siphon tubing (Fig. 3). There is no need in continuous rotation in one direction. If the mixer is equipped with radial blades, enough oscillation. You can limit and a single blade (Fig. 2). Even here the scope for their own decisions. As the rod is best to use rot-the materials, e.g., insulated wiring or nylon (chloride) wire, sold in hardware stores as linen. 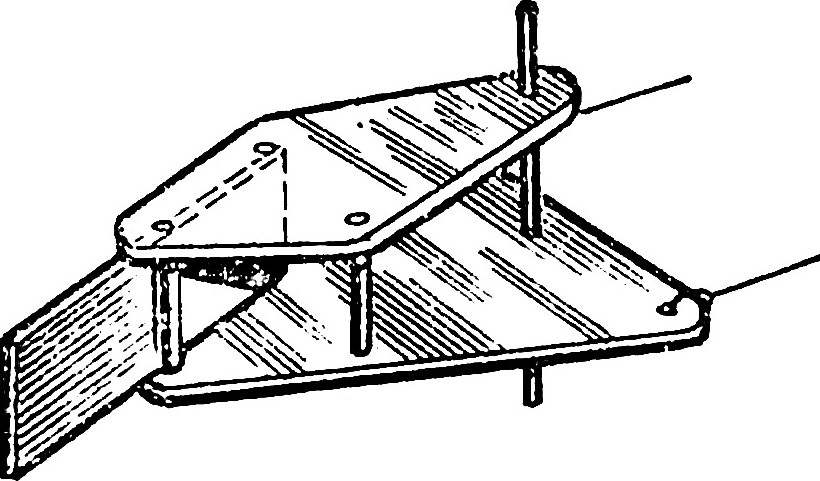 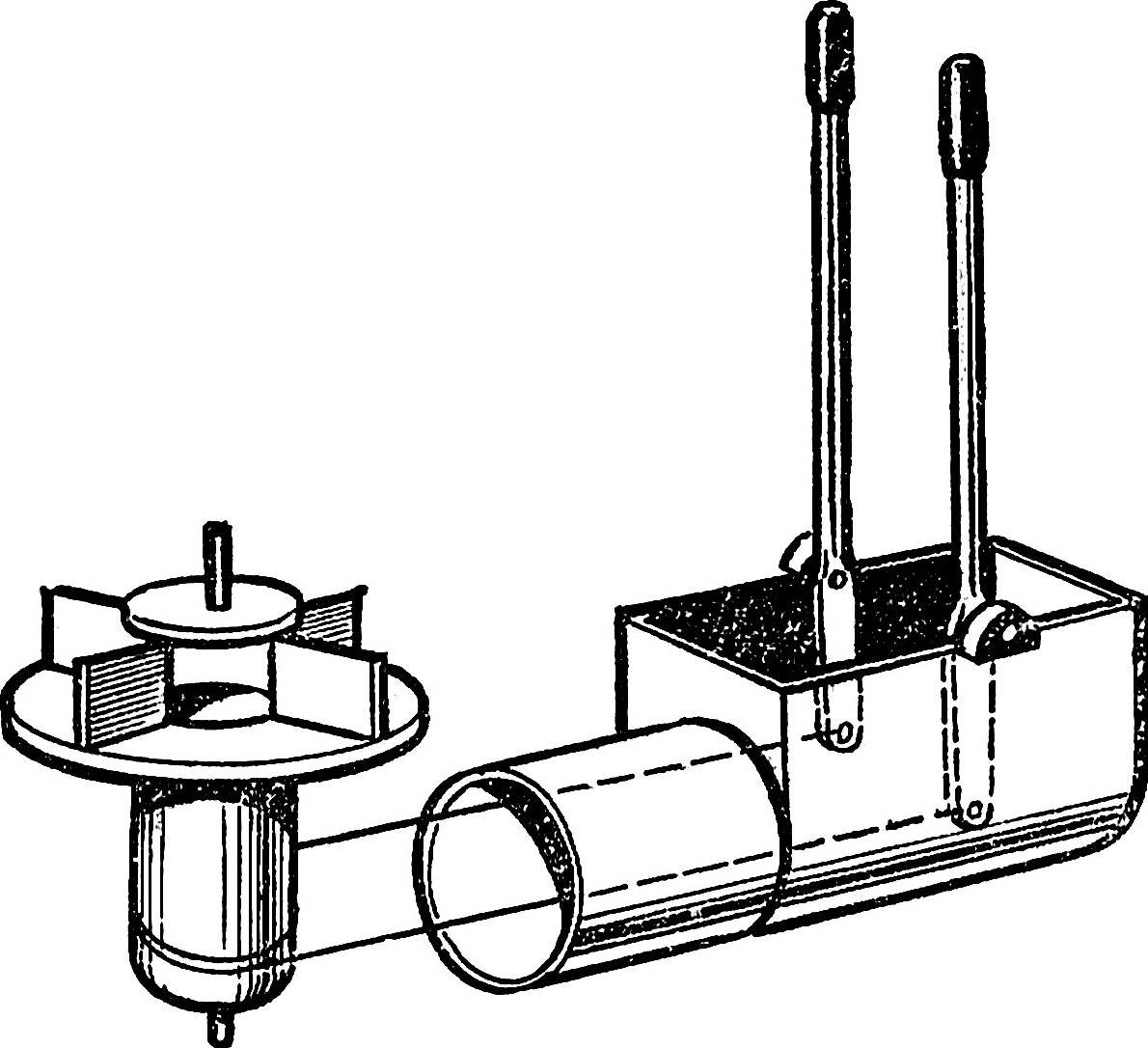 Fig. 3.
There is also the problem of the stability of the bell. Readers, carefully studied the material “Biogas: and warms, and cooks”, has already pointed out that if the schema represented in figure 1, to carry out, without modifying the design, the bell can lose its balance as soon as emerge: either capsize or jam. Figure 3 in the same publication are not accidentally provided the guide tube to the bell, but this installation is more difficult for domestic production.
In the figure we show the schema of the trim of the bell with two blocks (Fig. 4A) and a counterweight and “crane” (Fig. 4B). The error resulting due to the lax vertical movement of the suspension point of the bell on the “crane” (on the arc of a circle), negligible in connection with a significant excess of the lever arm on the rocker arm.

Fig. 4.
This system balance the bells the best that it can be used as a lifting device during inspection and cleaning of the fermenter. Given this, it is easy to complement the design of some auxiliary elements: blocks is better positioned to re the arrow (it is only to lift the bell to work under him, absolutely not allowed — “do Not stand under the load!”). Should do swivel and arm support “crane”, as opposed to stacked, as storage scales. But if in your area the frost does not happen, it provides a counterbalance in the form of a container filled with water.
The most serious difficulty standing in the way of homebrew, the manufacture of bells. Galvanized roofing iron allows you to give it the desired shape by simple means, moreover, it will be mild. But the fragility of the material in rapid corrosion in aggressive environment makes to look for other options. Therefore, we strongly suggest to look at the available scrap. Old containers, e.g. from petroleum, being circumcised can be very suitable prefabricated, in form (usually with welded spherical bottoms), and the thickness of the sheet material from 2 to 5 mm.
Apparently, the popular sizes of bells will Ø 2-3 m and the same height. If the “barrel” turns out to be less, you should consider whether to make a big bell or take two smaller ones (for example, Ø 1.5 m), at the same time returning to the variant of coupled simple units.
Some readers raised the question about the definition of gas pressure. Apparently, they did not pay attention to the obvious: as soon as the bell comes up — the force of the gas pressure has reached the level of mass bells. Let us explain this with an example. When the diameter of the skirt of the bell is 2 m, the area of its cross-section will be S=NR2=3,14*1=3,14 m2=31 400 cm2. The wall thickness of the bell is 5 mm and a height of 2 m and its weight will be about 500 kg. Suppose that the actual weight of the bell is 470 kg. Then the bell comes up at a gas pressure of 0.15 bar. (In the SI system mass M = 470 kg, the weight force G = 4700 N, the gas pressure p = 4700/31 400 = 0.15 N/cm2 = 0.15 ATM).
With the rise of the pressure bell is almost unchanged, its increase will only occur due to displacement of liquid volume equal to the supernatant of the side walls of the bell.
Noting the low gas pressure, we see that it (if necessary) can be enhanced by a simple method: install on the bell additional weight, placing it lower, for better balance of the bell.
Several interesting examples for comparison. The gas pressure in the urban network is in the range of 200-300 mm of water. article, and allowed up to 600 mm of water. art. In our system, this pressure should be the limit. Naturally, the question arises: is a private farmstead are able to give the materials sufficient? Of course not. Our recommendations relate primarily to the cooperative livestock farms, receiving every day more and more development. In addition, the reserves, and lie a lot of the farms: sometimes near livestock farms accumulated a significant amount of manure that is not used. Local residents could dispose of it, and then out to the field. After all waste materials from the fermenter is almost does not lose its value as a fertilizer. There is a double economic benefit.
In conclusion, reiterate our appeal to readers to share their experiences in the design and operation of biogas plants.