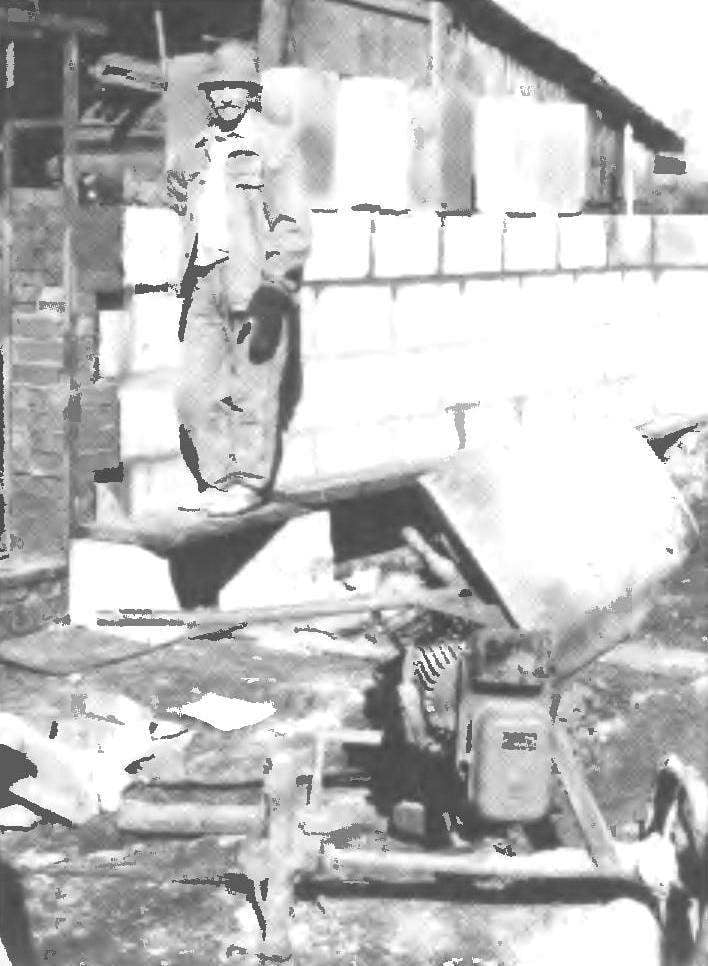 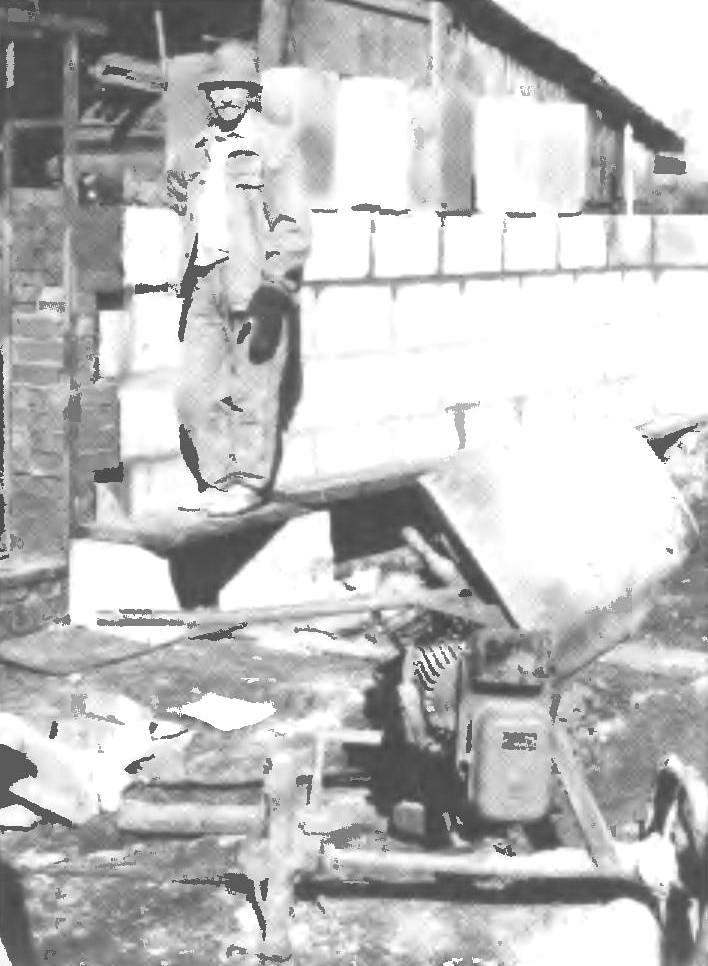 We lived first in an apartment in a three-story house, and then decided to move in the house mansion. But it would require a serious overhaul, and outbuildings and is subject to complete replacement. Had considerable concrete work. In the mind involuntarily surfaced memories of student teams, where they had to mix the solution in large volumes with only a shovel. Therefore, for ease decided to make rastvoromeshalku.
Of course, it would be easier to buy it (good choice on the market right now is great), but at that point, the money (which, as is known, superfluous) is much more useful to purchase materials.
Climb on sheds, garages and workshops at home and friends, to find a suitable components and materials. According to them, the mind has matured and the overall design scheme, but the dimensions of parts were determined in the course of work.
Manufacturer of concrete mixer started mixer — barrel-mixer. First, cut pieces: sheet steel 5 mm thick bottom plate 2-mm sheet — solid cylindrical shell belt and a few “petals”of the sectors of the conical part (although the shell is also quite possible to make a composite). Next, the workpiece with a hammer and vise gave the desired radiuses and bends. Then began assembling them. To the bottom and grabbed the belt, and the belt — petals (the latter also connected to each other). The resulting neckline was fringed with a rim of 10 mm rebar and edges savelevel around him. After that, all seams are carefully provari arc welding. Inside the mixer for forced stirring of the mixture welded three divider. They were made of the 16 mm reinforcing bars. 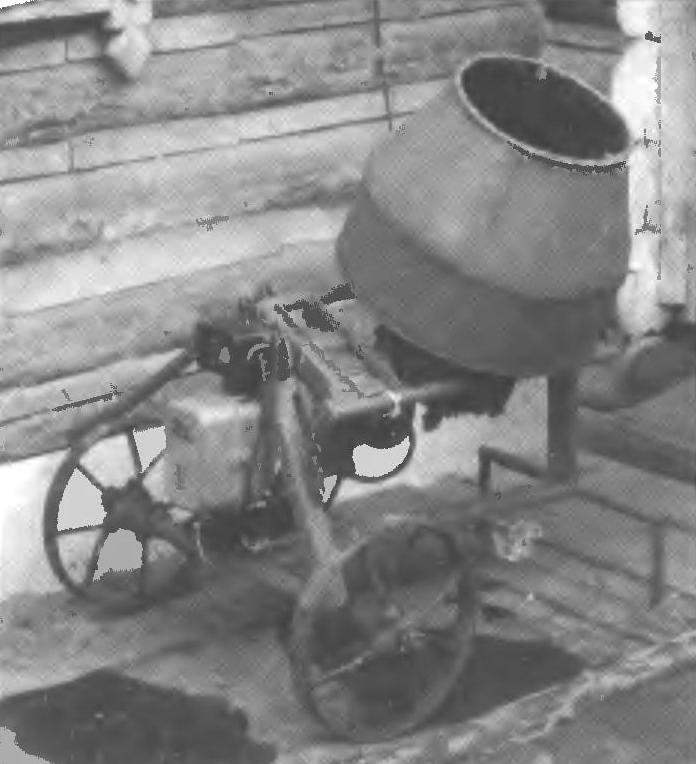 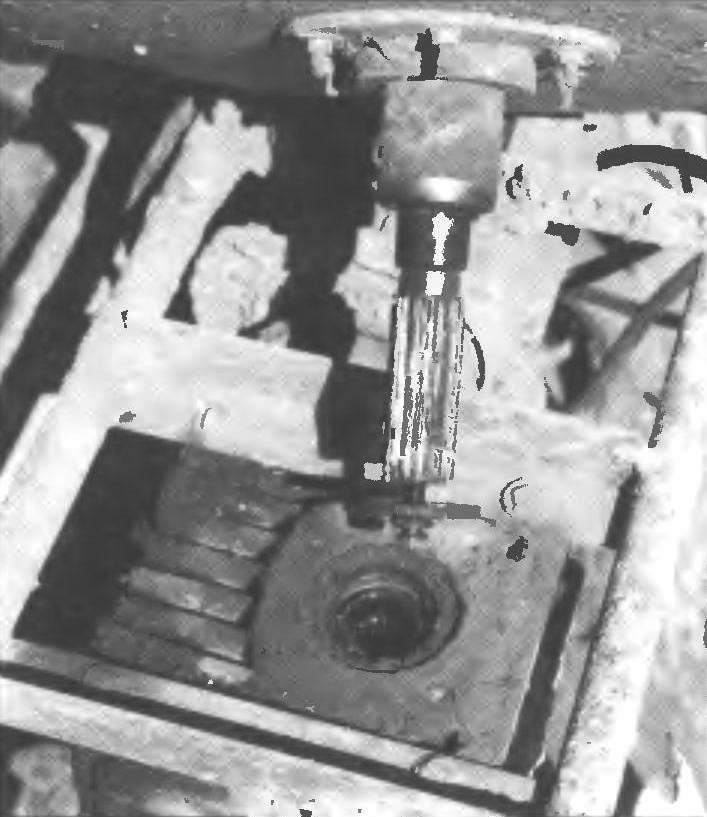 Docking port of the mixer and reducer
The rotational drive of the mixer consists of a three-phase motor (power supply 380 V) with a capacity of 1 kW with a speed of 950 rpm and the worm gear. Reducer although it is unknown what kind of technology, but approached its parameters is: having a reduction ratio equal to 17, it provides the optimal rotation of the mixer slightly less than 60 rpm.
Both mechanisms fixed rigidly and coaxially on a tubular subframe, and each other connected by rubber hose.
The subframe using 2 of the lug bolts М10х40 mm is mounted pivotally (rotatably) to the main frame. Spatial frame though, but very simple: its T-shaped base and stand (vertical and oblique) are made of welded rectangular tube section 60×20 mm. Inclined strut supported by an additional brace and it is welded to the panel, which is attached to the condenser box and the starter.
The frame has four legs: two wheels (thanks to which the mixer is moveable) and two legs. Wheels from agricultural equipment, without tires. Legs with the bridge between them is made of half-inch water pipe. From the bottom to the legs to increase the area of their supports welded flat glides.
Mixer through the bottom flange with the hub seated on the keyway on the output splined shaft of the gearbox and secured with M10 screw with washer, screwed into a corresponding threaded axial bore in the shaft end. For a thorough cleaning (when required even hitting the stuck mixture from the walls) the mixer is removed together with the shaft gear (see photo).
Unladen position of the mixer is balanced by the mass of the motor and reducer. But the mixer is set at different fixed angles. For this purpose, the inclined rack main frame is welded a lug with a hole diameter of 11 mm, and the subframe is a broad arched plate. In the hole of the eyelet is inserted a pointed pin and plate in place of drilled holes corresponding to the angles of inclination of the mixer to the vertical 40, 60 and 90 degrees. These inclination angles optimal answer produced by the mixing of the concrete mix, mortar preparation, clean-up of the mixer, respectively. Pin, not to lose, attached to the frame on the chain. The slope of the mixer is made by the handle lever, made of half-inch plumbing pipe and welded to the subframe. The connection is reinforced by the gusset, and the handle is slightly curved to ensure comfort and control at reasonable levels. For unloading the mixer is tilted up to the stop in the longitudinal beam of the frame. Sometimes loading components easier to produce, the maximum lifting mixer (at an angle of about 20°). The handle rests on the wheel.
Generally speaking, the mixer constructed under a right-handed medium height. If the owner-operator is left-handed, then the design should be done in a mirrored version, but with high growth should be increased 10 centimeters and the height of the standoff frame.
At maximum lift mixer handle rests on the wheel, and the maximum lowering of the casing rests on the longitudinal beam of the frame. In the last position if necessary, and “shock” cleaning mixer.
Electrical diagram model — are repeatedly cited in the publications, “Model construction”, so not going on it to focus the attention of the readers.
After a test run of the frame, the subframe and the mixer is coated with a primer, lubricated friction parts of gearbox, wheels, hinges.
To allow movement of the concrete along the perimeter of the construction site made 15-metre extension cable made of flexible, but durable cable. 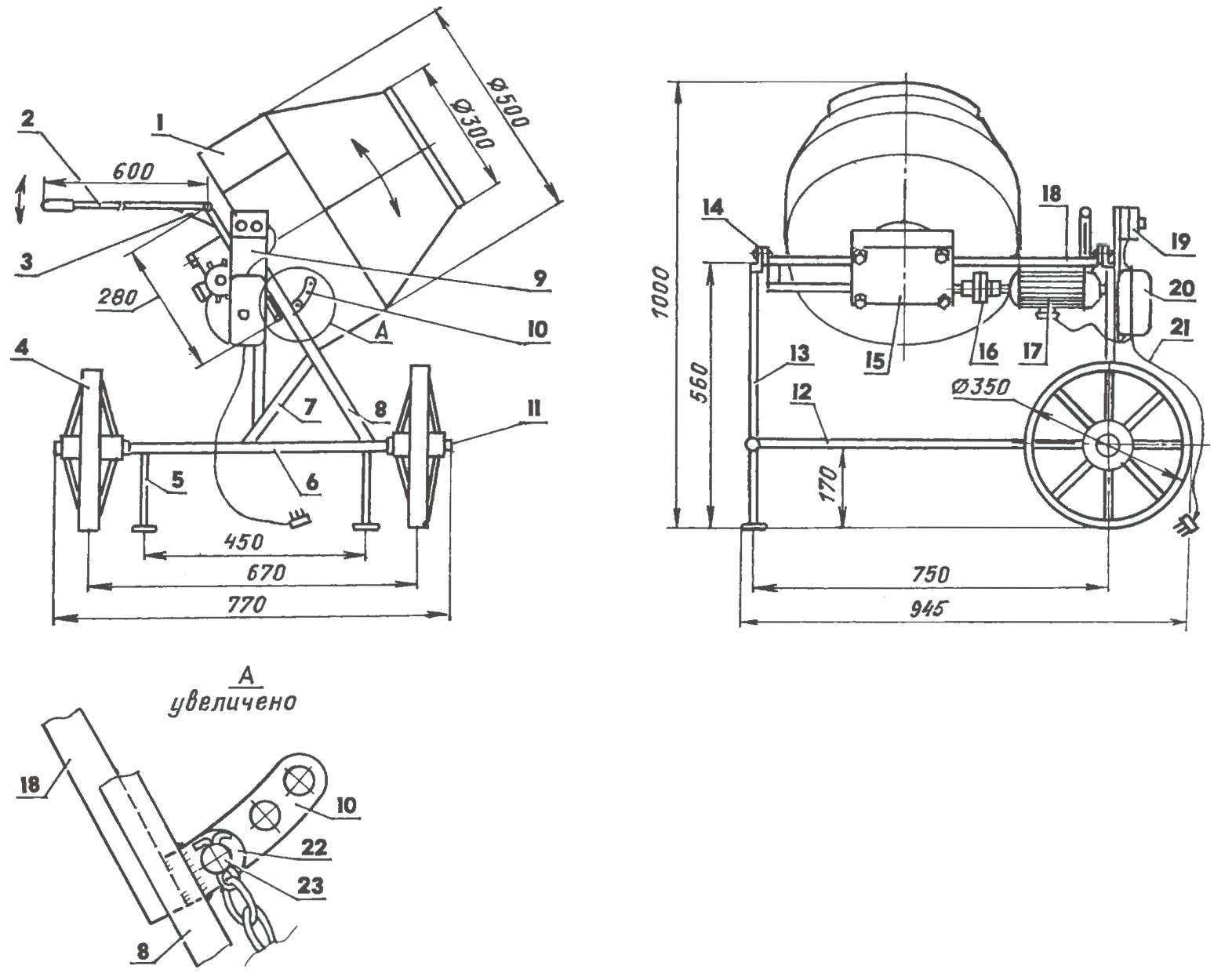 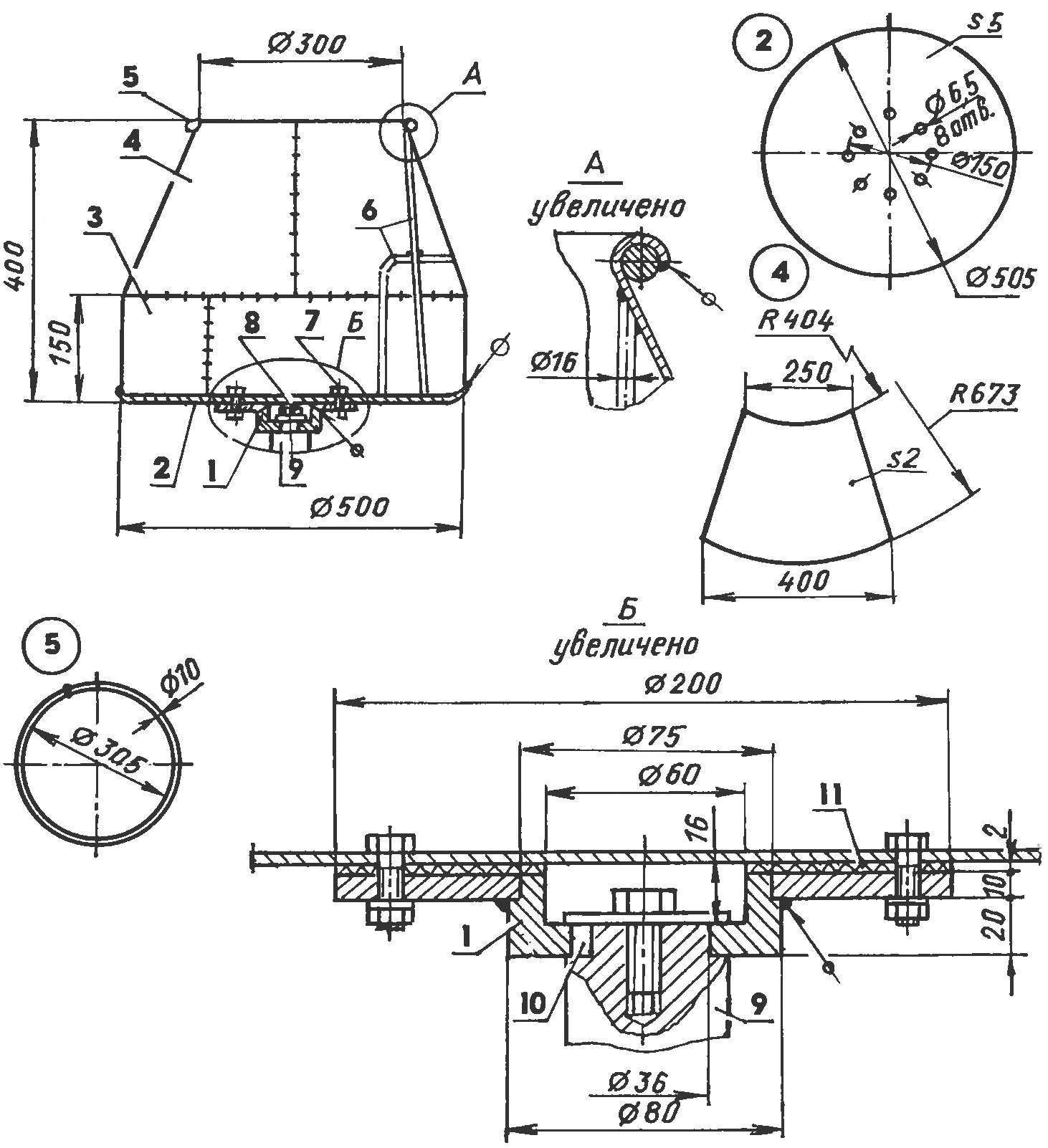