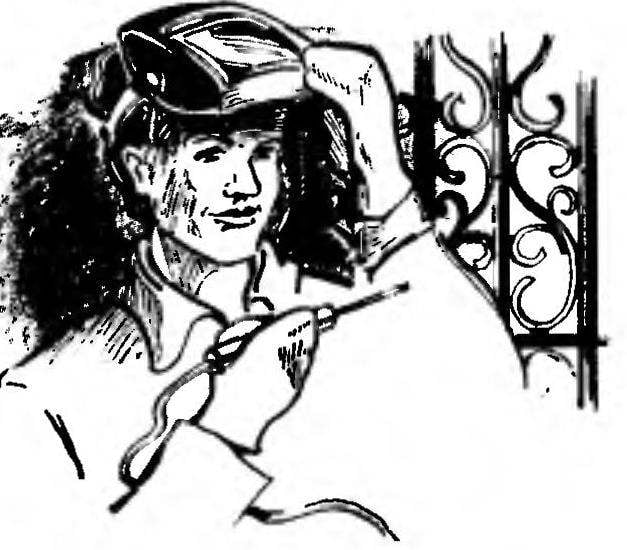 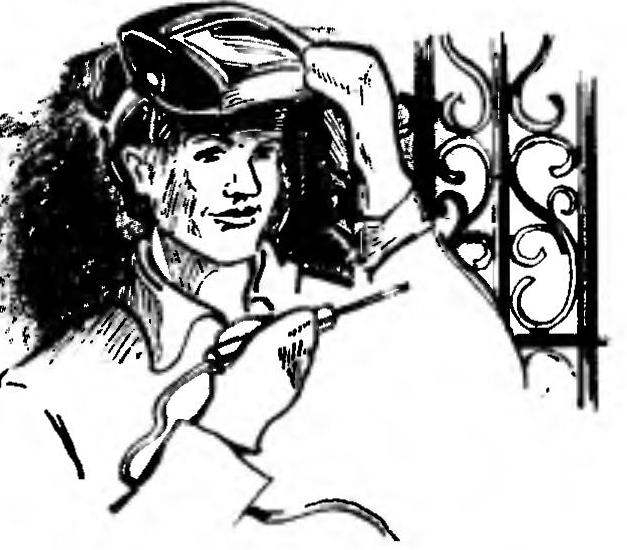 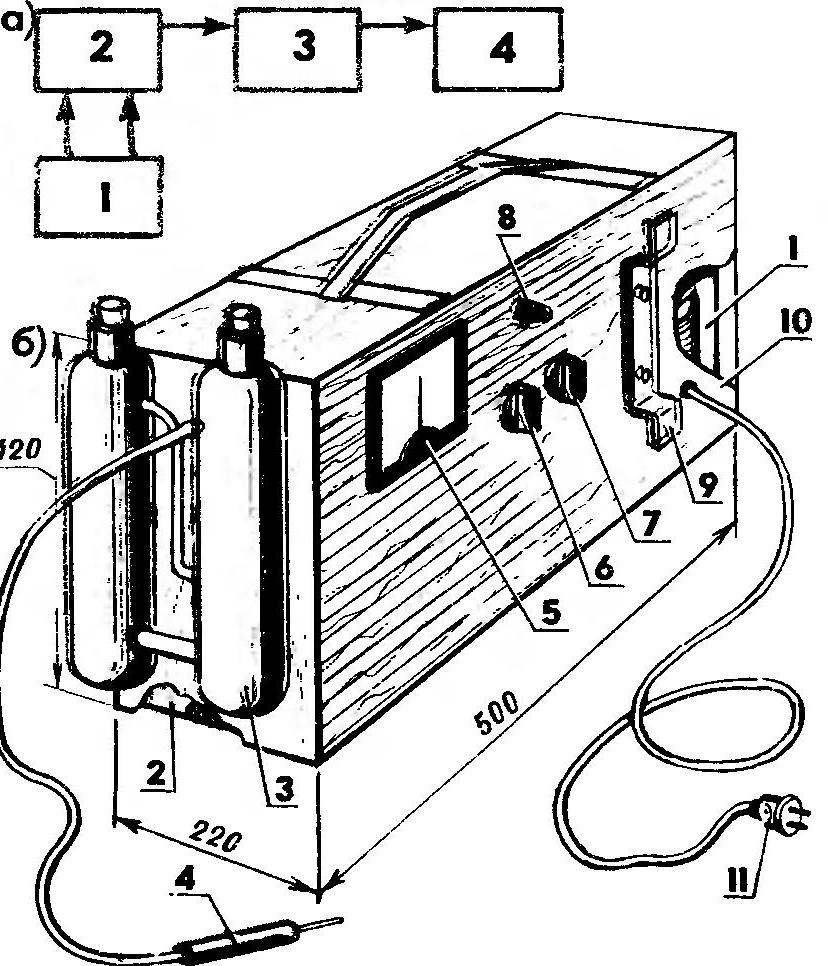 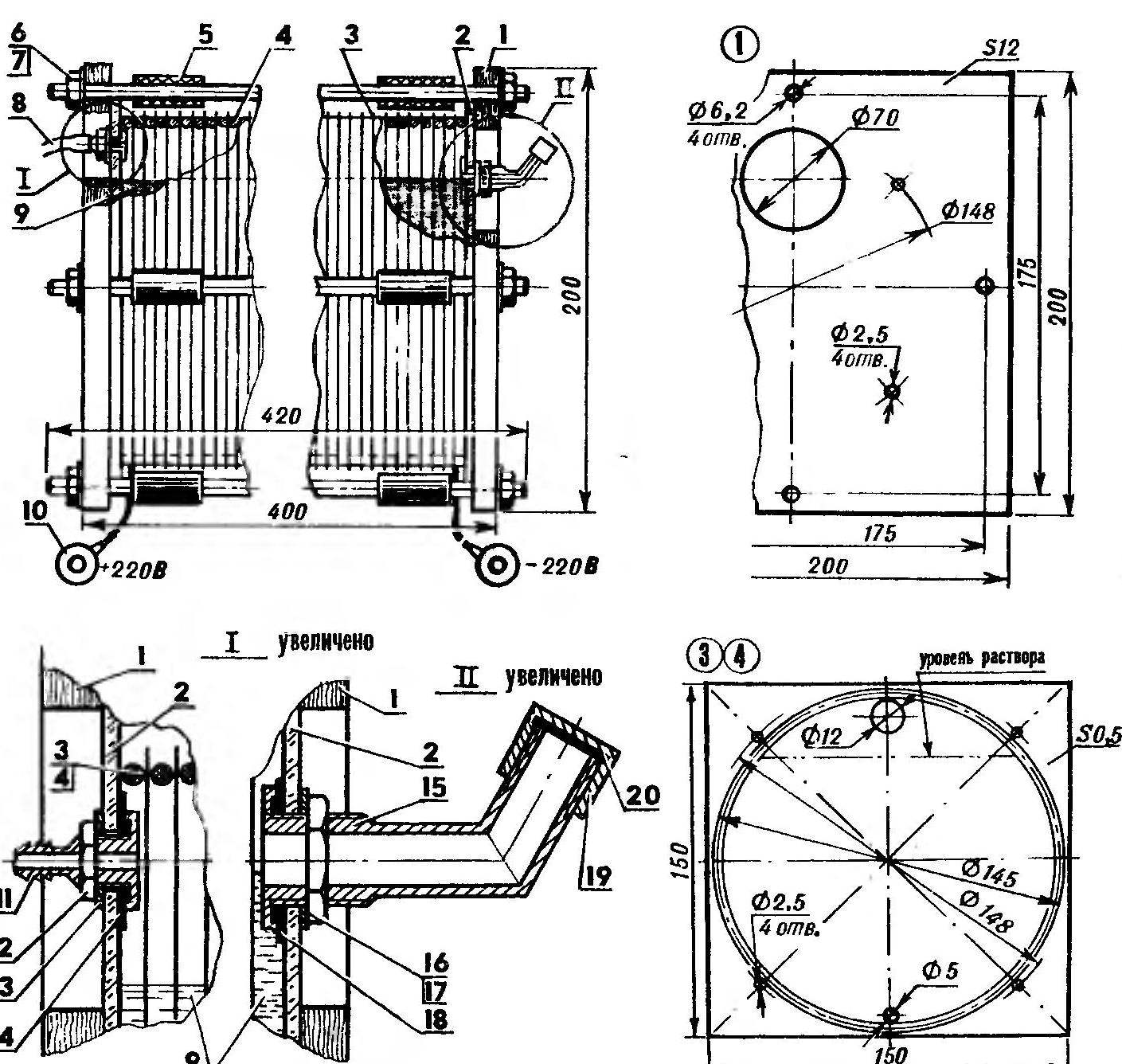 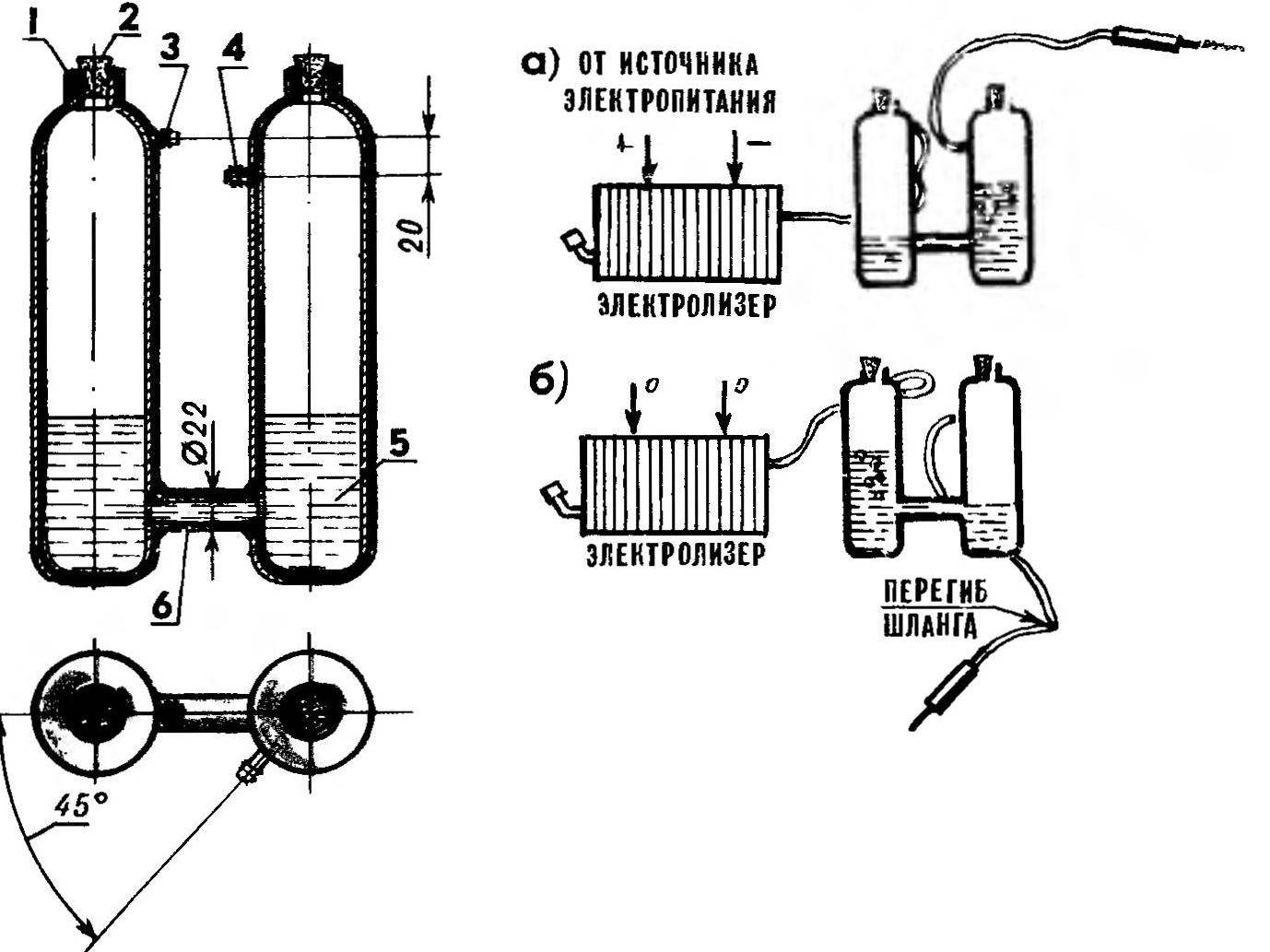 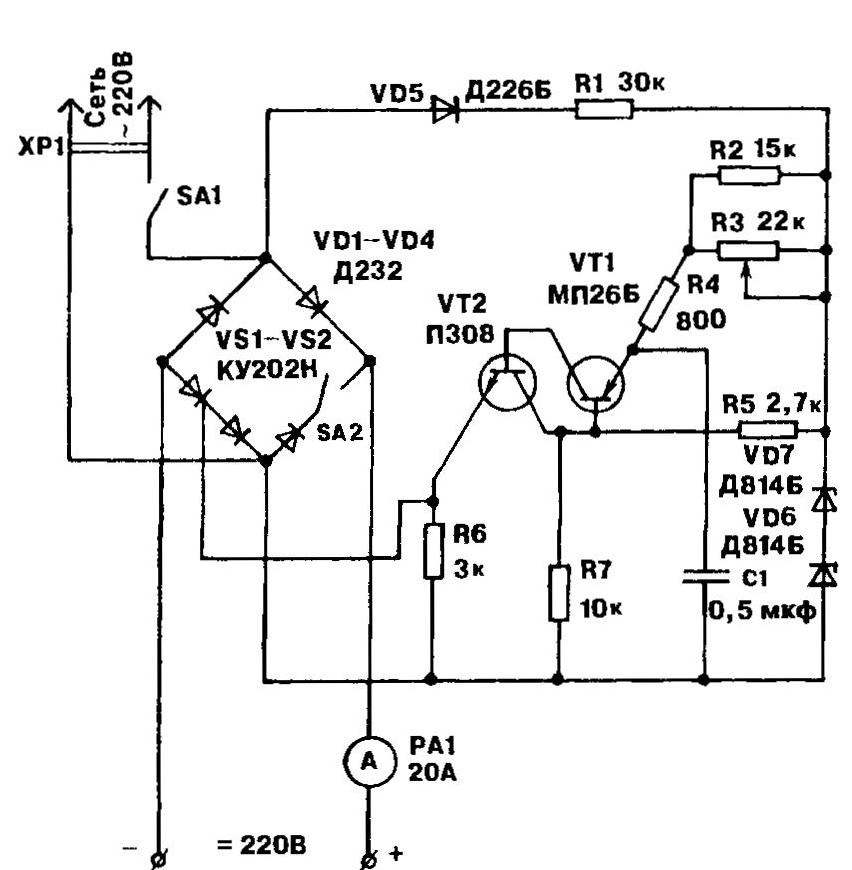 Fig.4. A circuit diagram of a power supply unit. 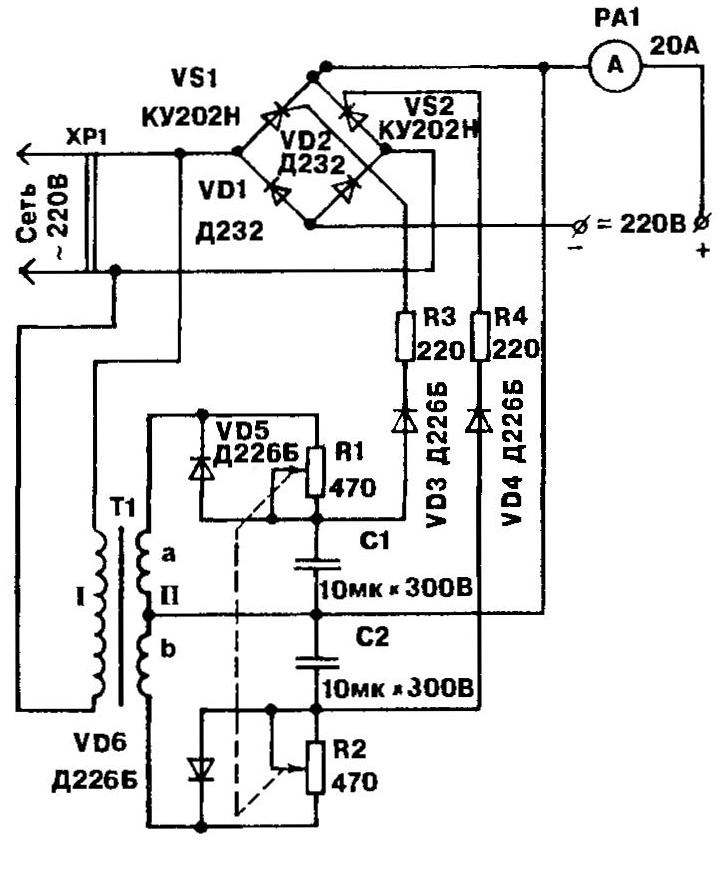 Fig.5. Option power supply using in the circuit of thyristors and a homemade transformer.
Between the side boards connected by four studs placed metal plate electrodes separated by rubber rings. Internal cellular cavity of the battery by 1/2…3/4 of the volume filled with a weak aqueous solution of alkali (Koh or NaOH). Attached to the plates a voltage from a DC source causes the decomposition (electrolysis) of the solution, accompanied by copious evolution of hydrogen and oxygen. This gas mixture, after passing through a special liquid shutter (Fig. 1A), goes next to the burner and burning, allows to obtain much needed for many technological processes (e.g. cutting and welding) high temperature, about 1800° C.
The performance of the cell depends on the concentration of alkali in the solution and other factors. And most importantly — the sizes and quantity of plate electrodes, the distance between them, which in turn is determined by the parameters of the power supply unit — power and voltage (based on 2…3 on the galvanic gap between the two adjacent to each other plates).
My proposed design of the DC power source is available for production in a “home Studio” and a novice homebrew. They are able to provide reliable operation even “vosmidesyatitonnye” (plates-electrodes of 81 PCs) of the cell, and even more — “Trinca-techniscope”. Option electrical schematic of which is shown in Fig. 4, POS makes it possible to easily carry out power adjustment for optimal matching with the load: at the first stage — 0…1.7 kW, the second (on SA1) is 1.7…3.4 kW.
And plates for the cell suggests — 150×150 mm. they are Made from roofing iron with a thickness of 0.5 mm. in Addition to the vapor 12-mm holes in each plate drilled another four installation (2.5 mm diameter), into which during Assembly pass through the knitting or Bicycle spokes. The latter is necessary for a better centering of the plates and strips, and therefore in the final stage of Assembly of the structure removed.
Actually had to break a head, before “in-pogorelka” has become a convenient and reliable as Edison lamp: included — work, off — work stopped. Particularly troublesome thing was the modernization of the electrolytic cell, and connects it to the output fluids. But it was necessary to refuse from become was the formulaic use of water as a barrier against flame propagation inside gas-forming battery (connecting pipe), and access the… use of kerosene as everything went smoothly.
Why kerosene? First, because unlike water, the liquid in the presence of alkali does not foam. Secondly, as shown, in case of accidental contact of drops of kerosene in the burner flame does not go out last — there is only a small flash. Thirdly: being comfortable “separator”, kerosene, while in the shutter, is safe in the fire relation.
At the end of work, during a break, etc the burner is, of course, is extinguished. In the cell a vacuum is created, and the kerosene flows from the right reservoir to the left (Fig. 3). Then barbatula air, after which the burner can be stored indefinitely at any moment it is ready to use. When enabled gas pressure on kerosene, which again flows into the right tank. Then begins barbatula gas…
Connecting tube in the machine — PVC. Only to the burner maintains a thin rubber hose. So after a power loss enough, this “rubber” is to bend with your hands and the flames, issuing finally lightweight cotton, will go out.
One more subtlety. Although the power unit (see Fig. 4) and is able to provide electricity to the 3.4-kilowatt load, the use of so much power in Amateur practice it happens very rarely. And not to “drive electronics” almost empty (in half-wave rectifying mode, when the output is 0…1.7 kW), it is useful to have another power source
of the cell is smaller and simpler (Fig. 5). In fact, this is a full-wave, known to many homebrew adjustable rectifier. And related to each other (mechanically) engines 470-Ohm potentiometers. Structurally, this connection can be done either with the help of simple gear trains with two gears textolite, or use a more complex device such as a Vernier (domestic radio).
The transformer in the power supply of homemade. As the applied magnetic set Ш16х32 of transformer steel. Coils contain: primary — 2000 turns of PEL-0,1; secondary — 2×220 turns of PEL of 0.3.
Practice shows that the considered self-made device for gas cutting and welding, even under the most stressful operation is able to properly serve for a very long time. However, every 10 years is required to conduct a thorough maintenance mainly because of the cell. Plate the last, working in a corrosive environment, is covered with iron oxide, which starts to act as a insulator. Have plates to wash out with subsequent Stripping a sanding disc. Moreover, to replace four of them (the negative pole), corroded acid residues, gathering close to “minus”.
It is therefore recommended to the electrolyzer pour only distilled water and alkaline solution to use the least contaminated by salts (no presence of traces of chemical compounds of sulfuric and hydrochloric acids).
The application of the so-called drain holes (except the filler and vent) also can hardly be considered justified, which was considered in the development apparatus. Equally optional is the input to the circuit of the apparatus of cans for the collection of accumulated super-aggressive alkali. Besides operation “bezbedno” design shows that this “harmful liquid” is able to gather 10-year period at the bottom of the oil stopper over the glass. The accumulated alkali is removed (e.g., maintenance), and the shutter pour another batch clean kerosene.
V. RADKOV, Republic of Tatarstan