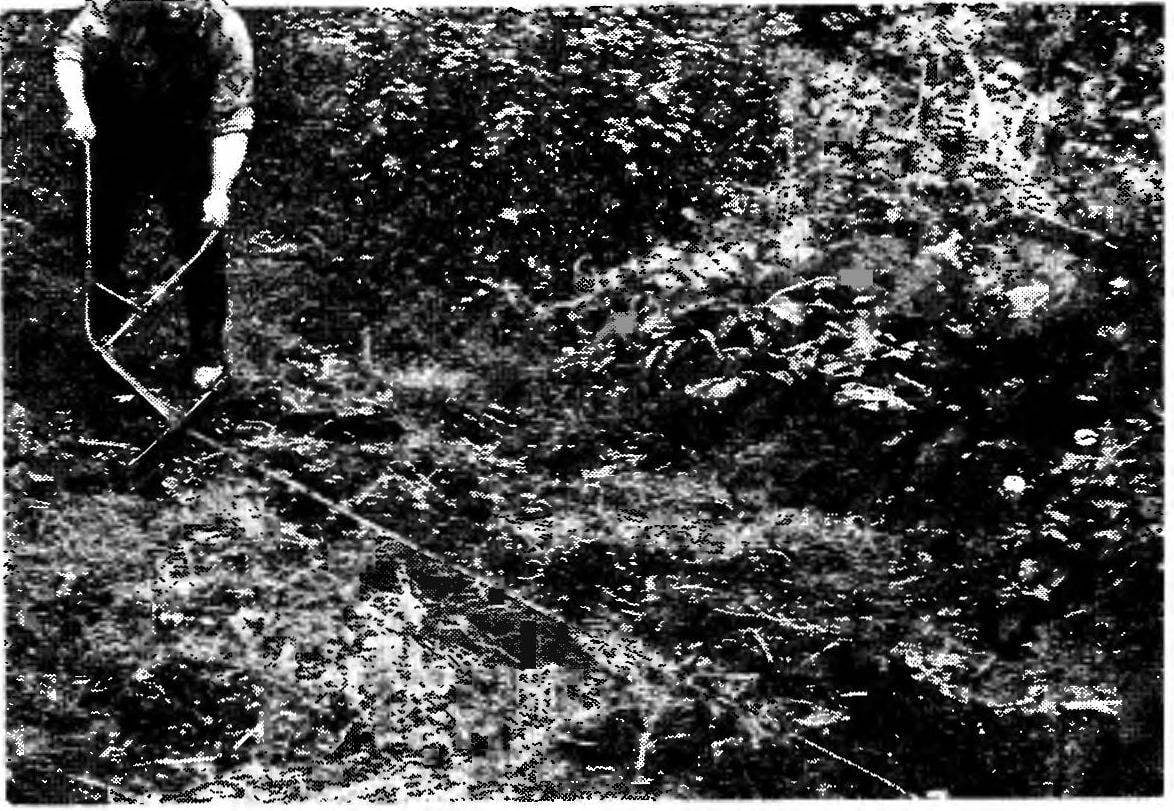 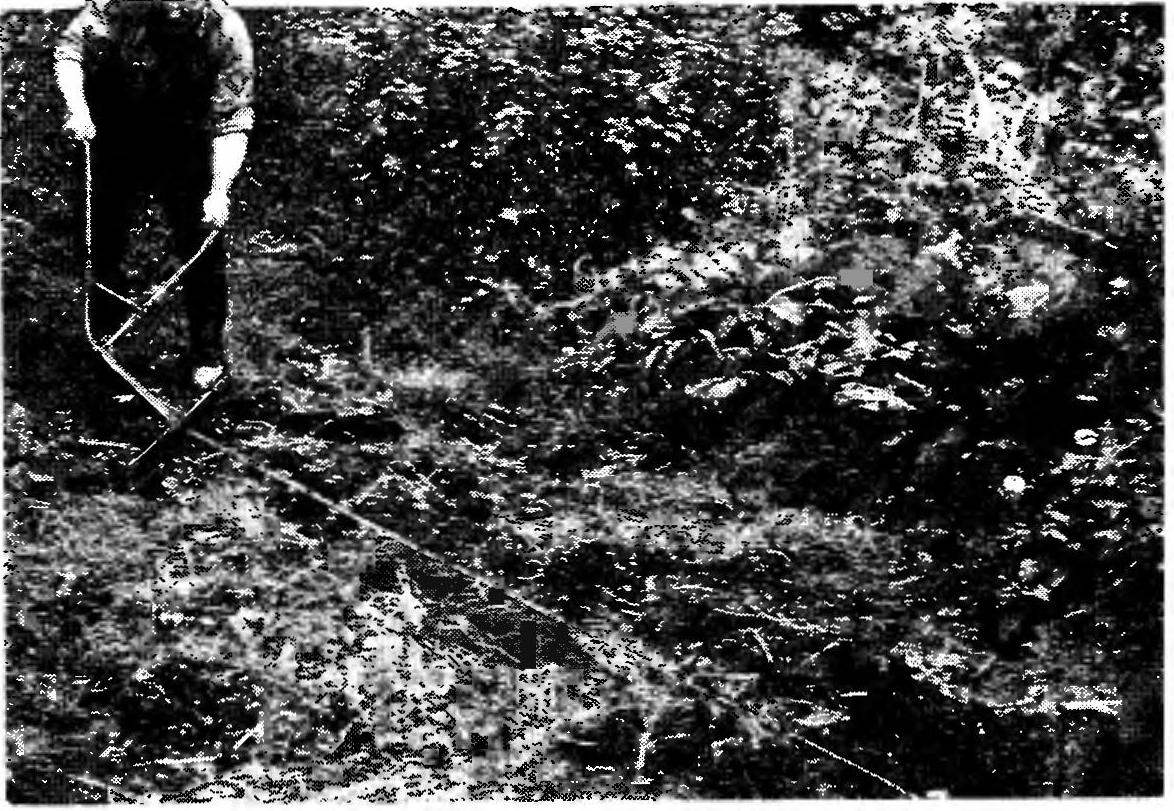 “Harnessed… the winch” — under this title was published in the “Modeller-designer” № 8, 1995, the material on the system that I designed of selectresponse. Not the last role in it plays a towed plow, the design of which proposed to make a very lightweight (less tired during the transfer to the beginning of each furrow). And now I propose readership new variant of the plough-“feathers.” A lot of it is really small — 13.7 kg (excluding handles), plus optional (for a better entry into the soil, cutting and turning layer) and 4.5-kg weighted. From my earlier designs and prototypes, the author of which is G. Odegov from Nizhny Tagil (“modelist-Konstruktor” N9 6, 1990), the proposed design is the presence of a deep notch in the working body, significantly reduces the resistance of the soil, and a number of other technical solutions.
With electric winch and plow are controlled by one that to others is just a wonder. The whole village gathers to watch as the plow “evil spirit wielding”, and the Plowman by this, just like there is in white shirt and patent leather boots. From the perspective of an outside observer, my actions on the land and work-is very difficult.
First I set in the beginning of the future of the furrow the plow and make two “digging” shovel to shingles immediately entered the land. Then head to the winch and stood on the tubular base anchor, turn on the unit.
Rotating the winch drum pulls (liner — bottom) nylon rope tied to his plow. And on the land there is a sufficiently deep smooth furrow. For her (after the next transfer of a plow) should be second, third… and soon the entire area is plowed.
To the crank during the working stroke of the on light and medium soils not touch — thanks to its special “geometry” plough without any assistance from the Plowman keep the furrow. Plow himself, and uneven (unlike the already mentioned depovskogo prototype), mountainous areas. By the way, this feature makes my plow is truly indispensable for a return to agriculture land destroyed by war. For example, when plowing old minefields in Belarus and “hot spots”. We only need to take care of appropriate protection of the farmer, providing him at least with an armoured shield.
As for stubbing, or, say, ploughing heavy clay soils, then there is nothing left “to — to lay” on the handles of the plow. Good configuration they are comfortable, taking into account requirements of ergonomics. Grip is detachable (to PLU| during storage and transport do not take up much space), are manufactured from lengths of steel pipe 22×3 together with welded spacer have a combined weight of 2.7 kg. 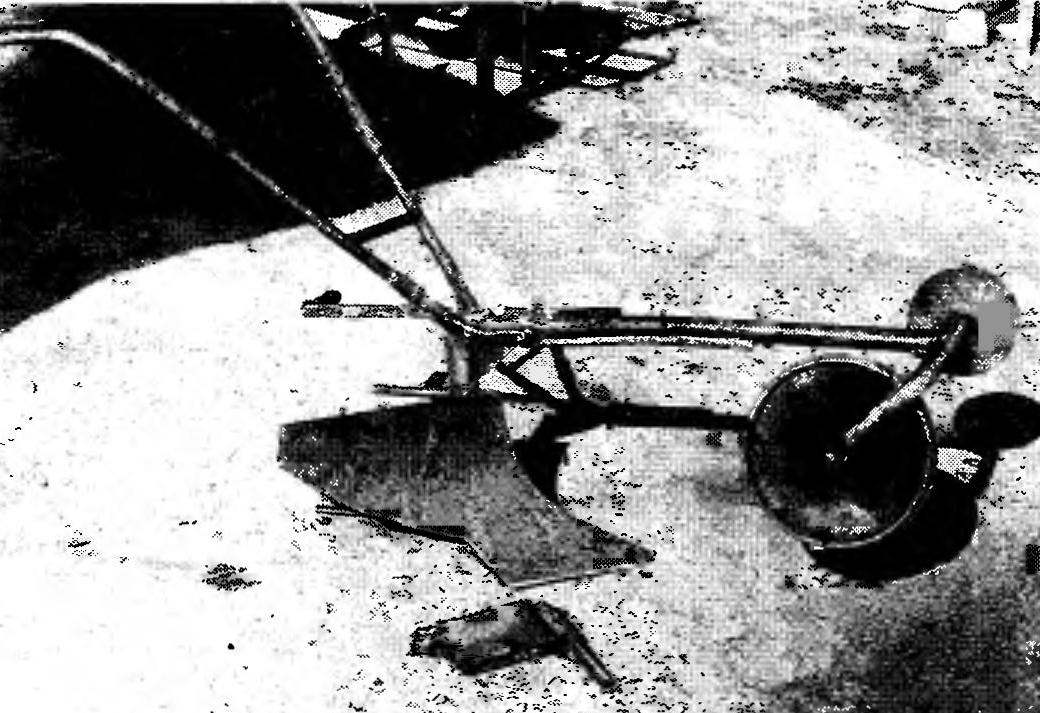 Plow confident “holds” the sulcus (in front of the optional rear ballast). 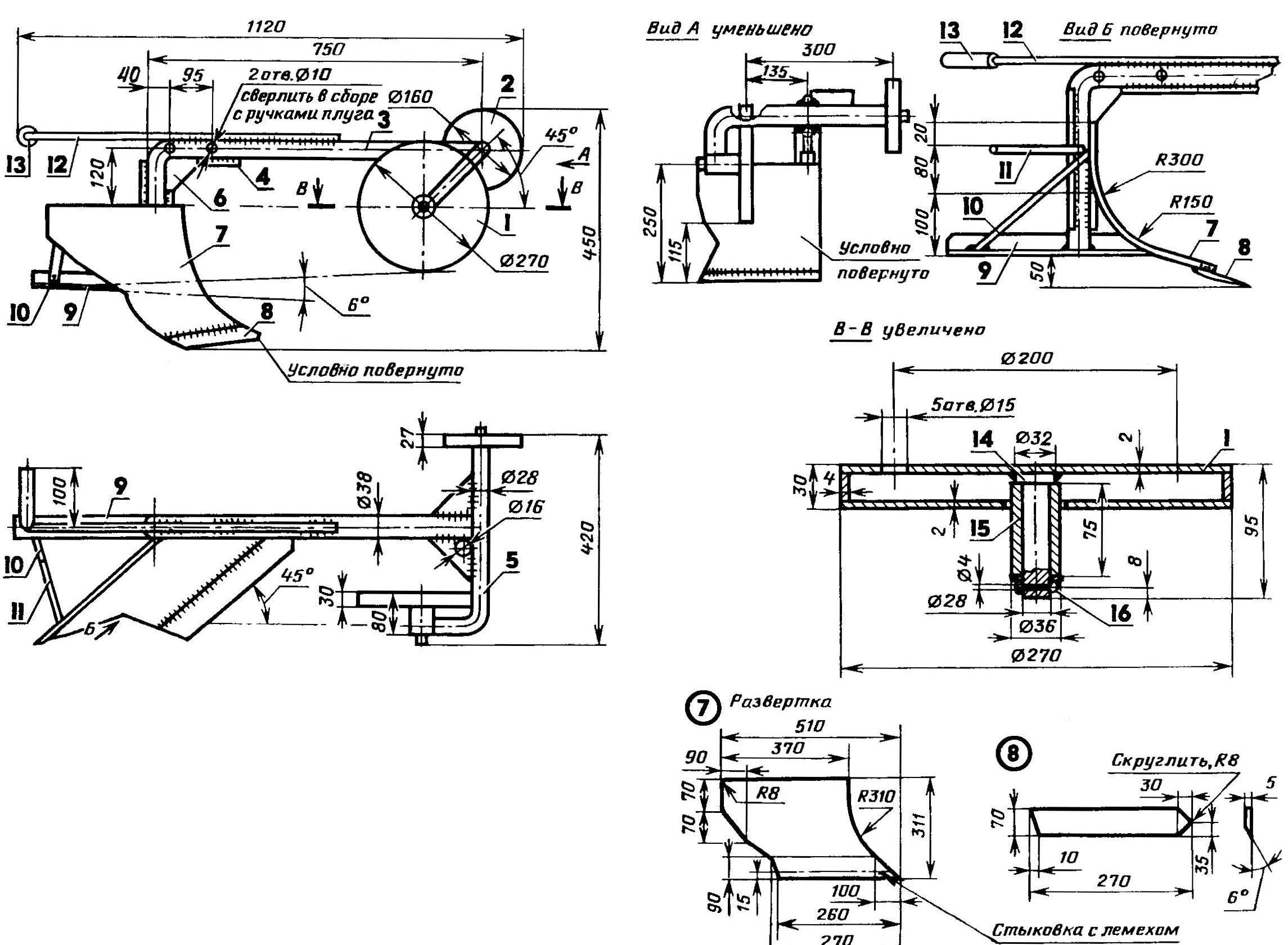 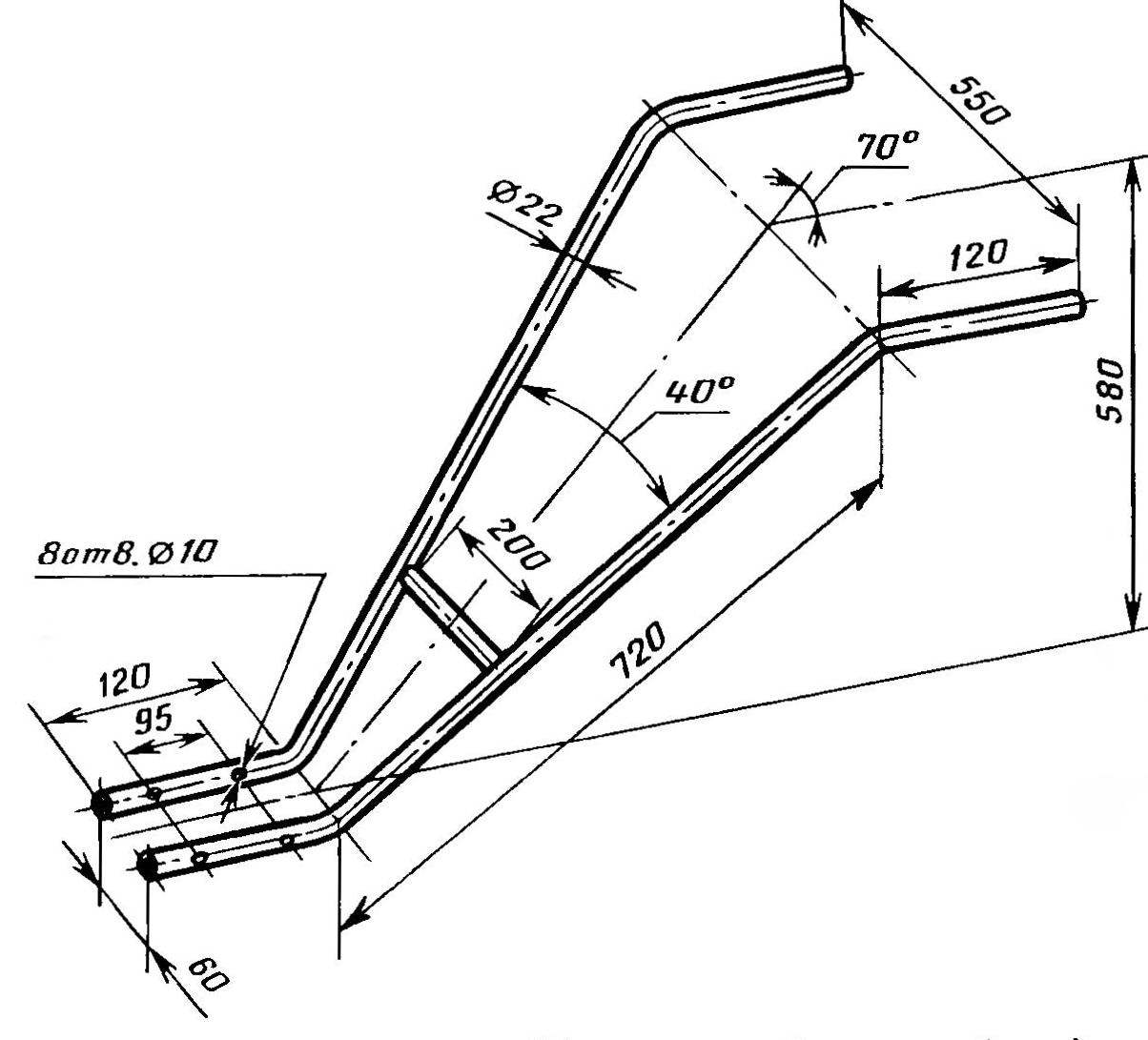 The handle of the plough. 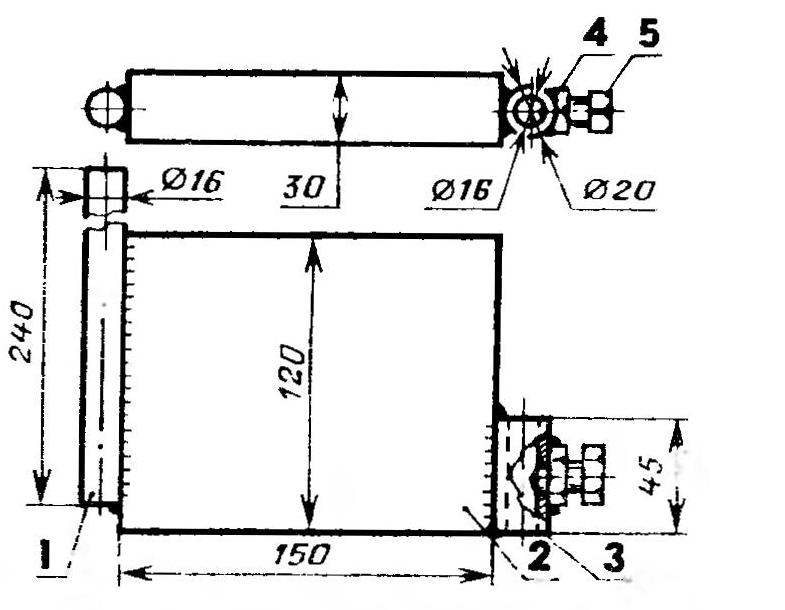 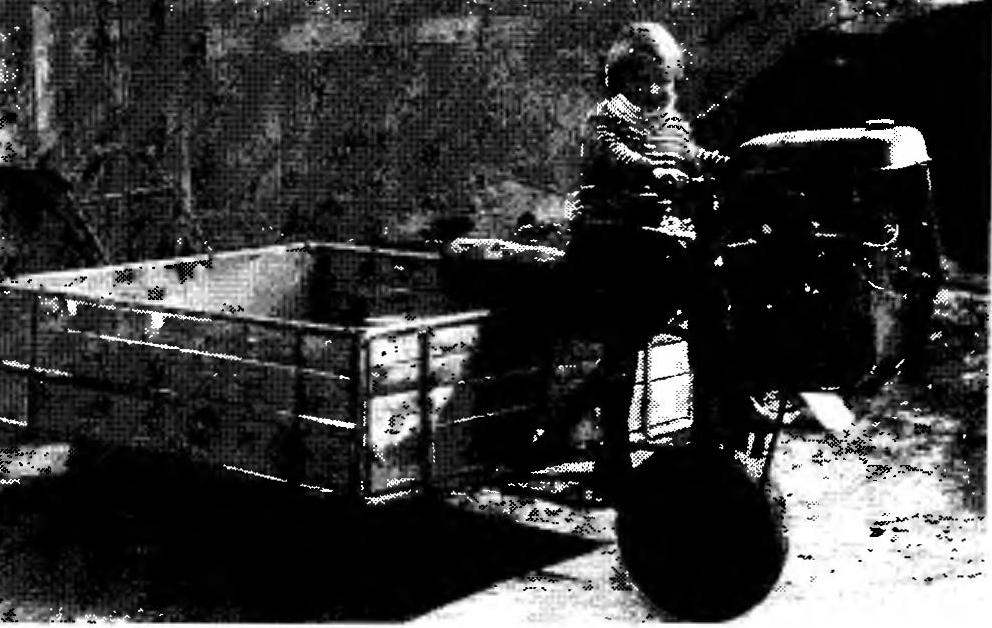 Interlocked with the cargo truck metamagic — good help to plow is the winch.
The beam of the plow is also of the tube 38×4 with amplification due to weld gussets and 14-mm steel bars. As the sharpened blade is used appropriately plate of wear resistant alloy steel. With a blade cut to sweep from a gas cylinder, it is connected by electric welding. I am convinced that together with the already mentioned triangle neck and was found experimentally by angle of attack 6° this solution is the best promotes the growth performance of the plow.
Borozdna and wheel homemade. Made of sheet steel with thickness of 2 mm using pipe sections as the weld axis and the hub. But you can adapt here and the finished parts from discarded machinery.
As practice shows, a good tool to plow-electric winch would be metamagic, interlocked with the cargo trolley. The design of this unit with sufficient completeness has already been covered in the pages of the magazine, and made me option anything significant from it is no different. Except that the brackets and the like “trifle”, which perfectly fit into the overall concept of the tractor with a more powerful engine (from scooter “Tourist”), rezonansov the exhaust pipe (the gases with the power hit the ground and immediately melt, making it difficult to breathe) yeah capacious cargo truck.
FROM THE EDITOR
The idea of using a towed “mechanical hoist” plow for farmers is not news. Moreover, in 1865, enterprising Fowler tried to put into practice plowing with the use of rope traction and steam engine (locomobile), located on the edge of the field. The last flywheel was wound the rope, passed through the rollers. And that, in turn, driven by a towed beam plow, moving as ploughing along the field, laid one after the other transverse grooves.
A slightly different approach to implementing a tempting idea proposed by Howard. Thanks to the ingenious system of ropes and blocks a plow across the field was towed without movement of the steam engine. But like Fowler, when the plowing had flaws. Plow insufficient exactly “kept” the furrow, confused and torn ropes, breaking the difficult technique. Plowing is called, comes at a price, especially when using the variant with two steam engines, traveling along the field. However, enthusiasts are not discouraged. Including in our country. Expanded the range of their creative search. Especially after in 1922 in Moscow, Butyrsky Khutor was tested electric winch with balance ploughs.
Promoter complex “winch— plow” appears and “Mode-list constructor”. Thanks to him, for example, became known to many experience Morozova from the village of Pavlovo-on-Neva (Leningrad oblast), processing farmland an electric of their own making (see “electric drill Plow…”, No. 9, 1981). Successful technical solutions contained in this design, received its further development. The best of the then emerging developments was of sufficient completeness and responsiveness presented to the readers and subscribers of our publication (No. 3 of 1989 No. 4 1994, No. 2, 1995). A good help for the recognition of Amateur designers, was also the detailed article “the Plow look forward and build for yourself” (#1, 1994).
Of interest to many, judging by editorial mail, the subject revision does not intend to close. And today’s publication is another confirmation.
V. RADKOV