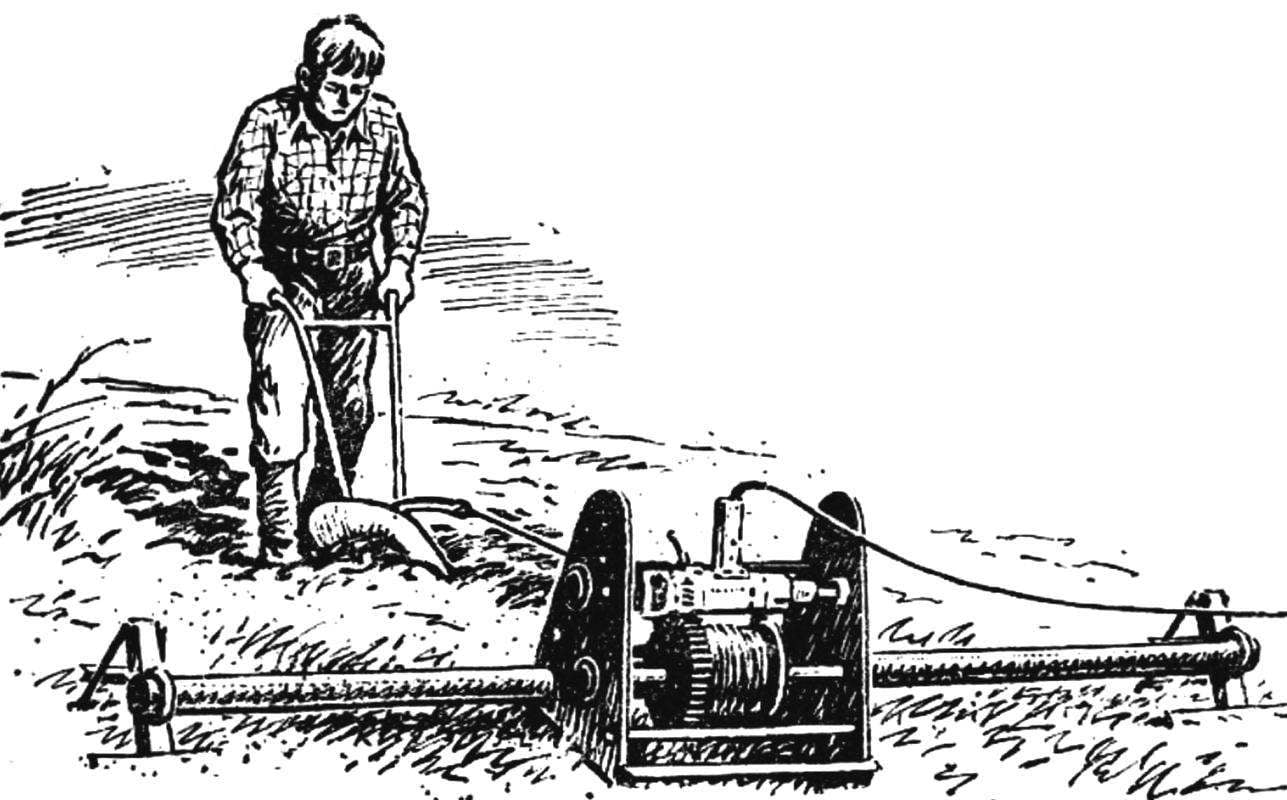 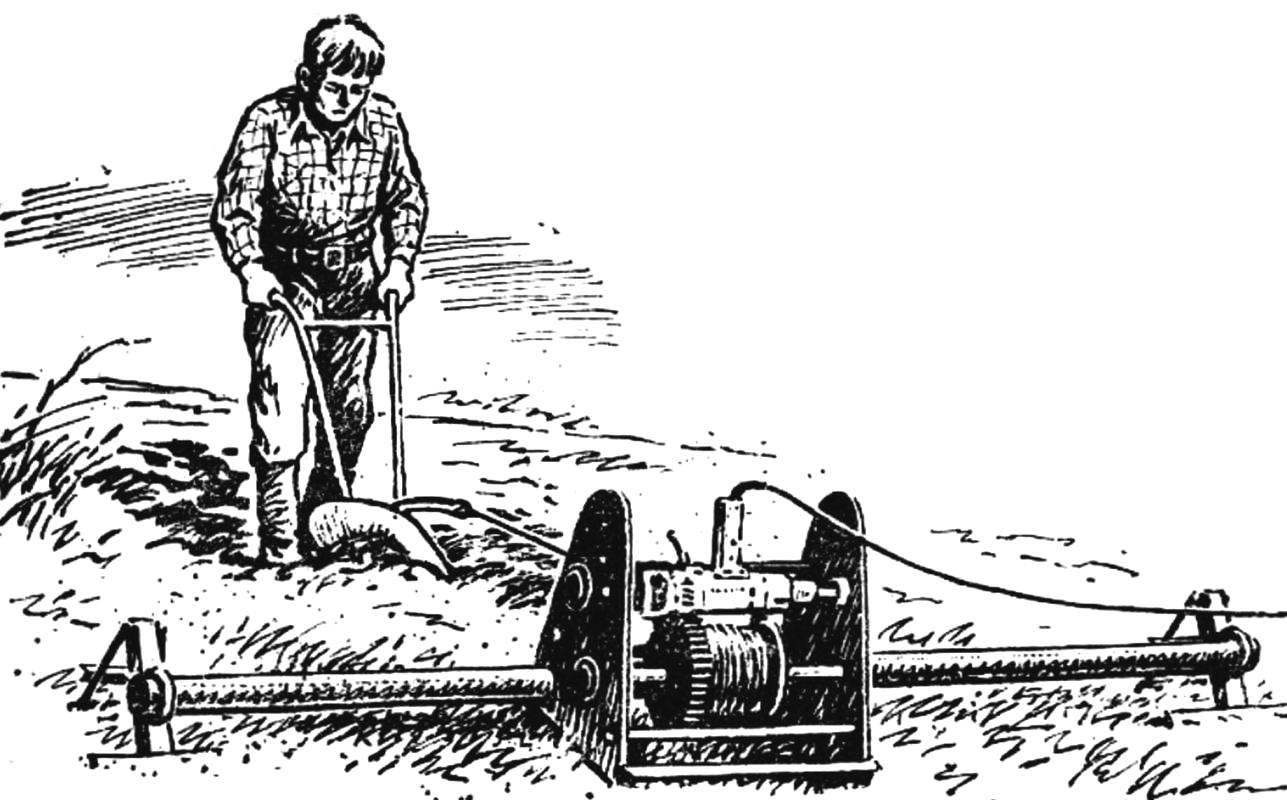 Blessed be the day and hour when the person came up with the idea to put the cartridge for fastening the tool to the shaft of the motor. As a tool the drill has become a widespread tool. Why not just make a drill: drill, cut, grind, Polish, mix, mow, and plow … even now!
In fact, the idea of using electricity in agriculture originated in the late 1920s, when the VIII all-Russian Congress of Soviets approved the plan of electrification of Russia. The realization of her life began already in the autumn of 1921, specifically, on October 22. In the gloomy, cool day on the field Butyrskaya farm near Moscow hosted the first Soviet test of an electric.
Since then much water has flowed through the turbines of hydroelectric power plants… Energy going through the wires, has become an inherent part of our existence. However, the fields of the country working machines, equipped with powerful and mobile internal combustion engines, but the idea is to plow the electricity is still living. The confirmation of the successful experience of the V. I. Morozov, a resident of the village Pavlovo-on-Neva, Kirov district, Leningrad region. He handles the infield with an electric of his own design.
Plow Morozov”s the most common: a ploughshare, blade, adjustable tow hook and the handle, which the ploughman holds it in the furrow. But “hitched” to a plow winch shown in the illustration. Design CE simple. Between the two steel plates of the housing in bearings mounted several horizontal axes. Rear top mounted single-phase electric power 600 watt number of revolutions per minute 250. The rear arm its mounted on l-shaped bracket, and the axle — bearing shaft. Side handle the drill is pointing up, and the cable from it goes to the power source.
Gear made from the body out and closed the casing, transfer torque of the drill on the intermediate shaft. On the latter through bolts fixed to the splined bushing from the gear coupled to the gear of the cable drum. Disconnect and re-connect them with the clutch lever, located above the stationary axle. If you push the lever to the side, the fingers of the clutch, resting in a groove of the gear, shifted it along the dowel and withdraw from the engagement.
Gear with rope drum are connected by welding, and planted on a power shaft mounted in bearings powerful. In order for the winch cable from slipping off the drum in front of him constituted “gate”: two vertical pipe sections welded to horizontal fixed between the hull plates.
The winch weighs a lot, to move it along the edge of the plots after each plow furrow is not easy. So the whole structure is placed on a long pipe of large diameter, resting on two trestles. The wheels are securely fastened with stakes and hold the pipe with the winch in place. Because it is located relatively high above the ground, the hoist is tilted back and rests on the ground bearing area, welded to the rear lower corners of the housing. While the stretched rope almost touches the support pipe. But it is necessary, after all, the closer he will be to the ground, the less the shoulder at the thrust that creates a moment which can tilt the winch.
How frost plow its an electric? Installing a winch on the edge of the pipe, it engages gear and carry a plow on the opposite end of the site. The cable unwound freely. Then one of the sons of the craftsman with the clutch lever enters the gear engaged and the electric motor. The drum begins to wind the rope, the plow is in motion, the farmer remains only to guide it along the furrow. When he comes to the edge of the field, the son turns off the drill, and everything is repeated again. 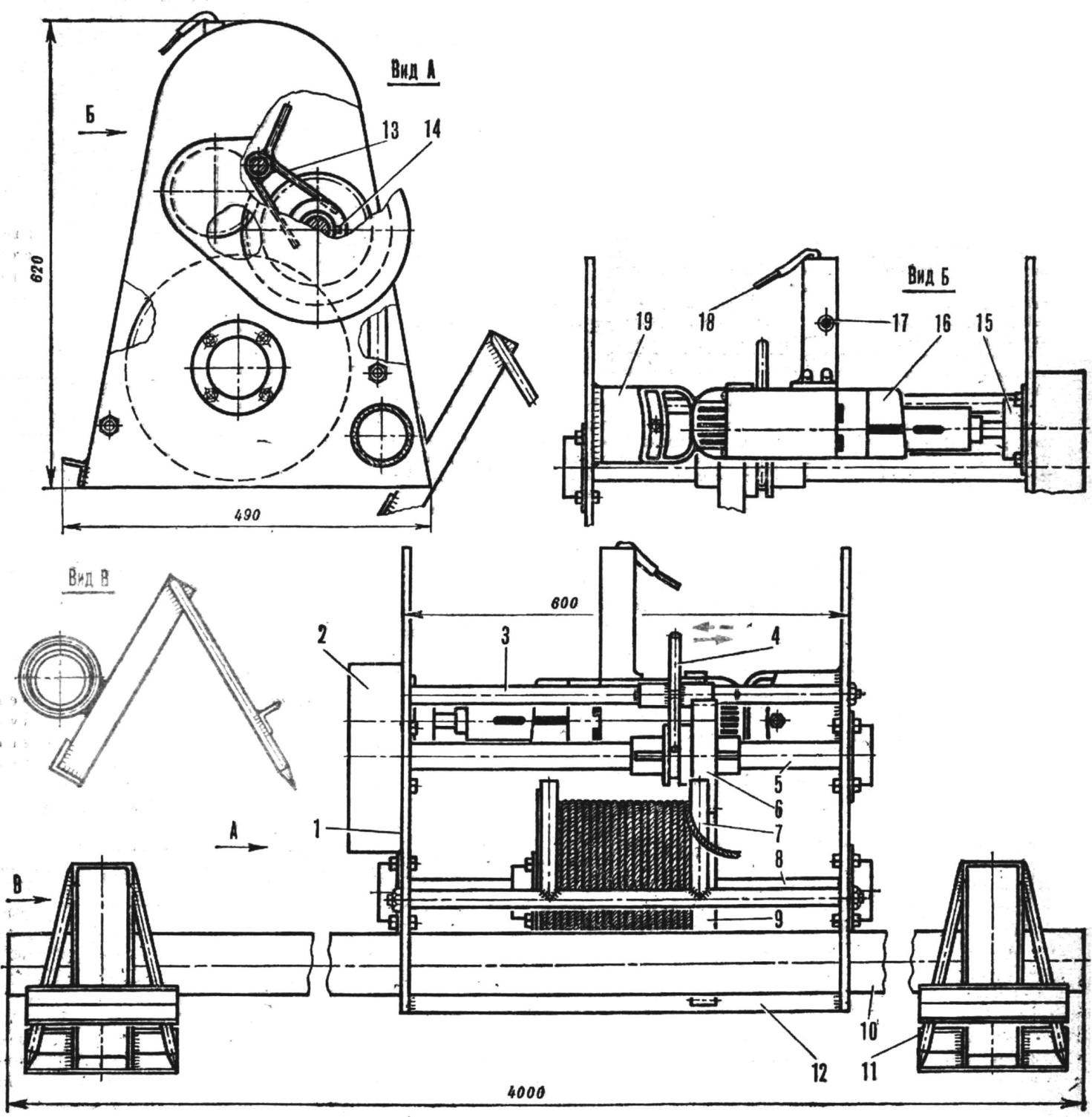 General view of the winch:
1 — housing 2 — gear cover leading and intermediate shafts, 3 — axis clutch lever, 4 — clutch lever, 5 — intermediate shaft 6 — clutch gear, 7 — gateway 8 — a power shaft, 9 — gear of the cable drum 10 to the support pipe, 11 — tragus, 12 is the reference area, 13 — finger clutch, 14 — key 15 — the bearing of the drive shaft 16, the drill, 17 a switch, 18 —. cable, 19 — bracket.
No doubt. complex “winch — plow” created by a rural craftsman, interesting. But before recommending it to repeat, I would like to make a proposal for the improvement of the design of this complex. The fact is that open with an electric the area, as follows from the description, just the two of us. One who will work one will not be able to be at the plow and winch at the same time. Therefore, it is necessary to ensure that management of the clutch and the drill was focused on plow. For this coupling, for example, it is possible to make electromagnetic.
However, experience shows that successfully worked stationary source of thrust, Autonomous motorized plow is better. He’s got more advantages: the obstacle you can drive around and haul it back empty is not necessary, and the retention in the furrow spent less, and so on. In short, those who light up the idea to build an electric, should focus on elektromotora. But this does not mean that the experience Morozova need to consign to oblivion. The fact of the matter is that they created very valuable. Look closely, because its design is all that is required to create electromotively! Except that the wheels are missing… the Cable support rail and trestles, of course, be used no longer.
…One good idea gives birth to another, more successful. And there is no doubt that the day is near when the electric tillers will help the rural farmers to grow rich crops is on a par with their petrol counterparts crackling.
expert Commentary
An electric the V. I. Morozov — one of the first designs submitted for the competition, “Small mechanization”, declared the Central Committee of Komsomol. The value of it is that to move the plow frost boldly used the electric. In spite of the use therein of low power electric drill, not intended for continuous operation under load, the successful operation of the plow indicates the correct choice of geometrical parameters of the gear and rope drum.
It is unclear, however, fully corresponds to the LM quality of the soil by an electric Morozov agricultural requirements. Because the plow needs to raise the soil layer to a depth of 20 cm, turn it over and crumble the lumps up to 5 cm, completely closing up the plant residues. To cope with this work, the working body should move at a minimum speed of 1.25 m/s (4.5 km/h). The calculations also show that for a transmitted power of 600 W and the amount of resistance to movement 100 kgf (even without taking into account the efficiency of the transmission mechanism) the speed of the plow Morozova may not be more than 0.5 m/s.
There was also the issue of electrical safety Plowman, because the drill is designed to work only in a dry place.
However, this does not detract from the achievements of the rural surface. His experiments, as well as the experience of many other enthusiasts, give impetus to the development of electrified means of small mechanization of agricultural works, which will find wide application in the farms of our citizens.
V. KOZUBOV