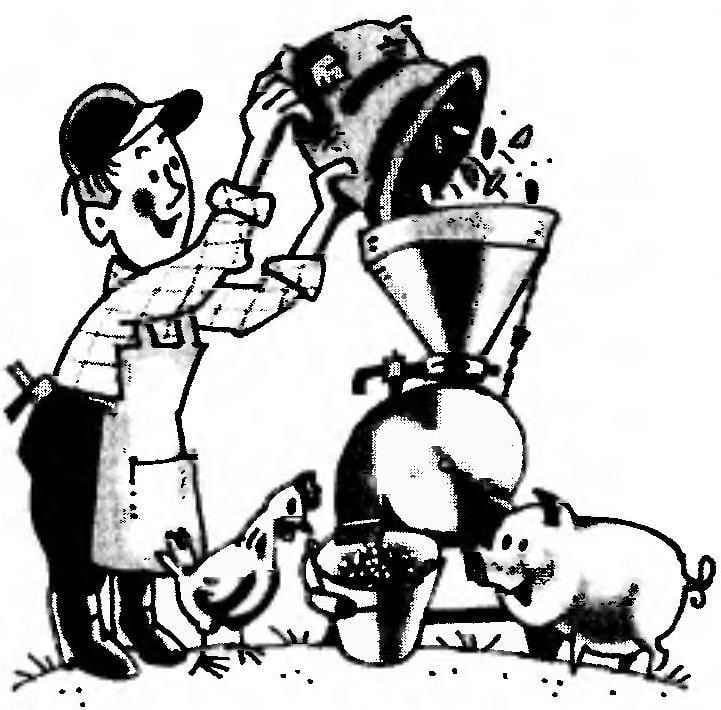 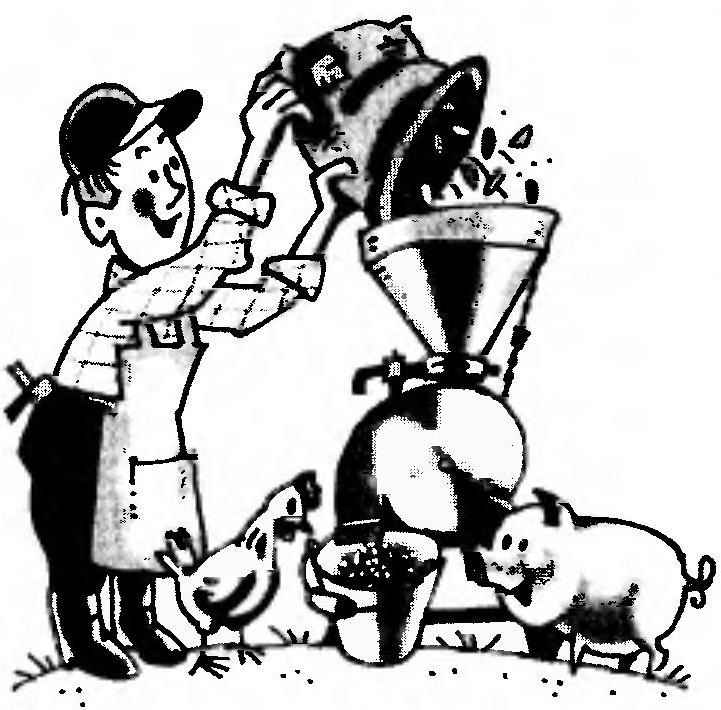 In the journal “modelist-Konstruktor” No. 2 for the year 1989 was published material A. Baklinskogo from the city of Kremenchug, Poltava region about micromelia, which he designed for his household. This publication pushed me to also fabricate a similar unit for the same purpose. But the performance of the device A. Baklinskogo I was not satisfied — by the time animals on a farmstead was already done, and everything planned livestock animals and poultry to increase. Because immediately, “estimate”, intended to make a more powerful mechanism.

Most of the manufacturing of Assembly — welded; machine works a little used and details of factory production.

The main nodes of my mill, like other similar units, frame-stand, casing, hopper, a working body (the rotor with hammers) and the electric motor.

The emotor of 7.5 kW, 3000 rpm is running on a network with voltage of 380 V. In the circuit connecting the motor to the network used in the circuit breaker of 16 A. the Powerful electric motor provides high performance stretch time in this work does not make sense — the pleasure of it is below average.

First welded the frame-rate of a height slightly greater than the length of a standard bag, and on top of it (shelves inside, i.e. towards each other) welded a couple of brackets. Four-pillar frame — red ring of water pipes, three bottom rails and two top — of area 30×30 mm. Brackets — from the corner 70×70 mm. to give them a G-image of the-ing form in one of the shelves made a cutout in the shape of a rectangular isosceles triangle, then the workpiece is bent and the seam where it was cut shelves made. For rigidity in the corners of the brackets still welded gusset plate steel 2.5 mm sheet. Distance between brackets — the size of the feet of the motor. In the lower shelves of their horizontal branches over the holes in the legs perform the necessary holes for mounting the motor. 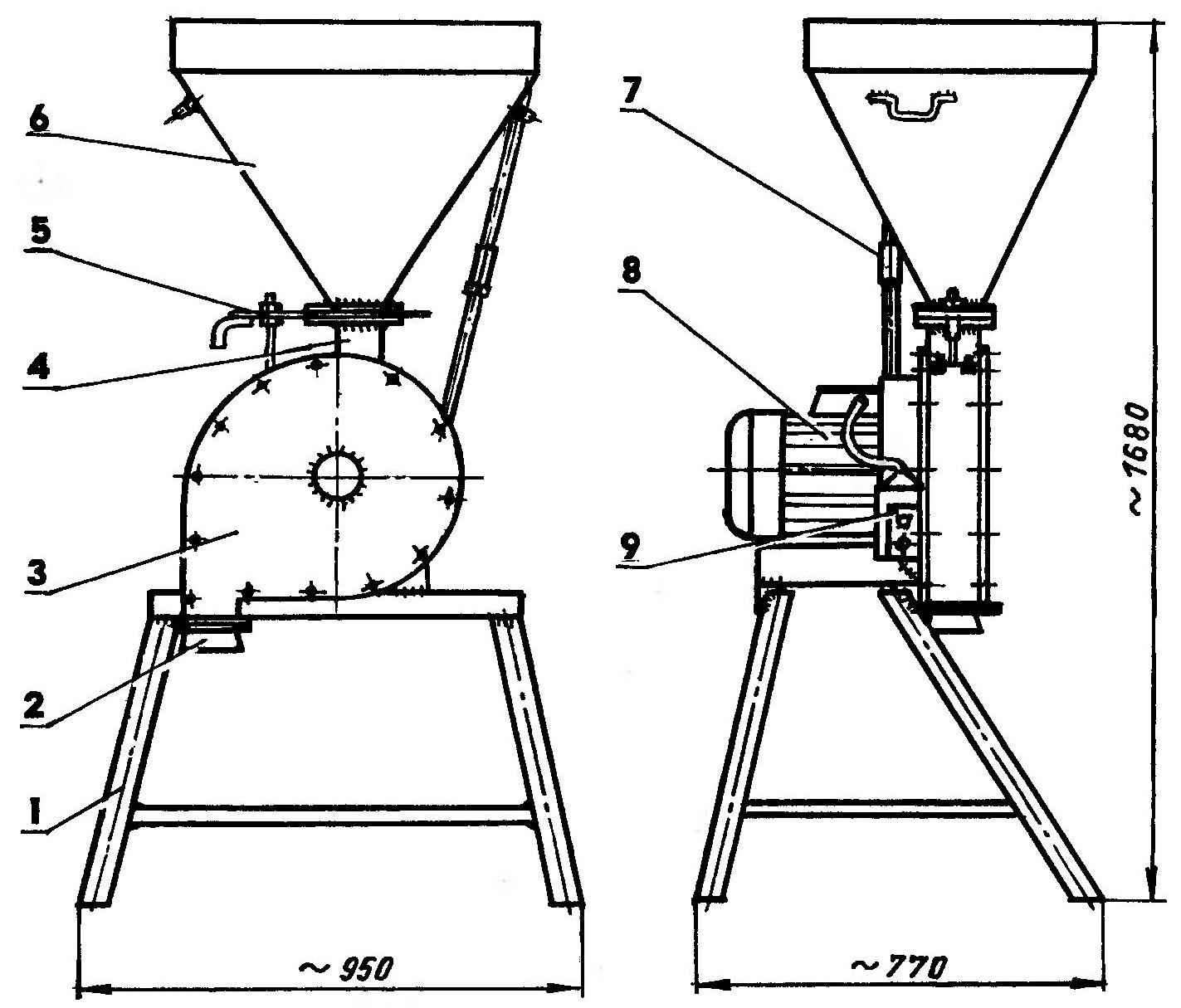 The vertical branches are tack welded the hull, sending it down the outlet tube and providing a Central alignment hole of the housing with the motor shaft. On the shaft wearing technological sleeve with an outer diameter of 30 mm and combined it with a hole in the casing. Housing-a casing (volute) from the decommissioned fan has a steam setting. The impeller from him as unnecessary was removed, and the suction port of the removable sidewall brewed by overlapping a patch of sheet steel of thickness 2.5 mm. Sidewall attached to the sidewall of thirteen M6 bolts.

At the top of the shell cut a window below the neck of the bin size 90×50 mm, with one short side located above the axis of the motor shaft (and the rotor). Along the side the full width of the shell welded at an angle towards the window of the small guide site-the visor. Here, inside the hole of the outlet pipe from the peak to the edges formed by the wall of the pipe and the shell, covered with a removable sieve and fasten the two M8 bolts from each end of the shell. A cloth sieve was placed at the same on the arc of a circle shell. The opposite half of the shell was equipped with a “decks” finned (with one hand) cast iron tiles. The “decks” used industrial mills — choose from the old more or less unworn. But for my crusher, they did not fit size was too wide and long with a large bend radius. So they had to percolate to pieces, and the pieces cut small slices a good length 94 mm, so that they can be laid around the circumference of the shell. Before installation, place each piece (“deck”) drilled two holes for the M6 bolts, with countersunk head. Then, placing oak strip between the “decks” and the shell, to the last attached part with bolts M6, pre-drilled corresponding through holes, using each “deck” as a conductor. As a result, the half shell was lined with “decks”. The distance between the ends of hammers, and toppers “Dec” tried to withstand in the range of 3 to 4 mm. Over time, the “soundboard” wear out (not from grain but from solid impurities: I can get there, even nuts and bolts) and a maximum allowable gap of about 10 mm.

The opening and the water outlet welded on flange for connection to the first hopper and the second exhaust tip. Appropriate flanges welded to the bunker and tip. All these parts are made of the same material (steel sheet thickness 2.5 mm). Bolt holes in flanges are drilled, bringing the flanges to the package and barely taking welding one part to another.

At the top to the walls of a bunker on the perimeter of the outside welded low vertical rectangular Board outline, and the sides of the pair of handles, curved steel rod. Between the hopper and the neck mounted shutter: two longitudinal plates with a valve between them. The flap is cut a guide groove and a window size 90×50 mm (the same as in the shell) to adjust the flow of grain from the hopper into the crusher. Between the hopper and the casing wall mounted split a prop from half-inch pipe.

The most critical and complex knot in my crusher — rotor-coil with hammers. Hammers — a standard taken from the production part, and the rotor is a homemade, welded, in the form of a coil. Coil sleeve machined from a steel bar with a diameter of 70 and a length of about 180 mm. This length is necessary in order to billet it was possible to clamp in the Chuck of the lathe and carve detail without reinstalling. A keyway in the bushing made in the following manner: insert in the appropriate hole (hole diameter) steel plug and at the junction of the parts a drill bit with a diameter equal to the width of the keyway on the motor shaft, drilled a hole. After that, the plug from the bushing dislodged.

Wheels-cheeks manufactured from steel sheet 4 mm thick, making each of them, except for the necessary holes (one for the shaft and four — axes, hammers), two with a diameter of 13 mm to connect the puller bolts (for repair), installed them in the recesses at the ends of the sleeve and welded. The fingers are machined from a suitable hexagon washers — “logs”. The thickness of the washer is the same as the hammer — 3 mm. After that I assembled the site, alternating between the washers and the blades when installing them for 13 sets on each finger of the rotor. While one finger Assembly started with installing the washer and then install the knife. Fingers with knives and washers in the rotor stalled pins. 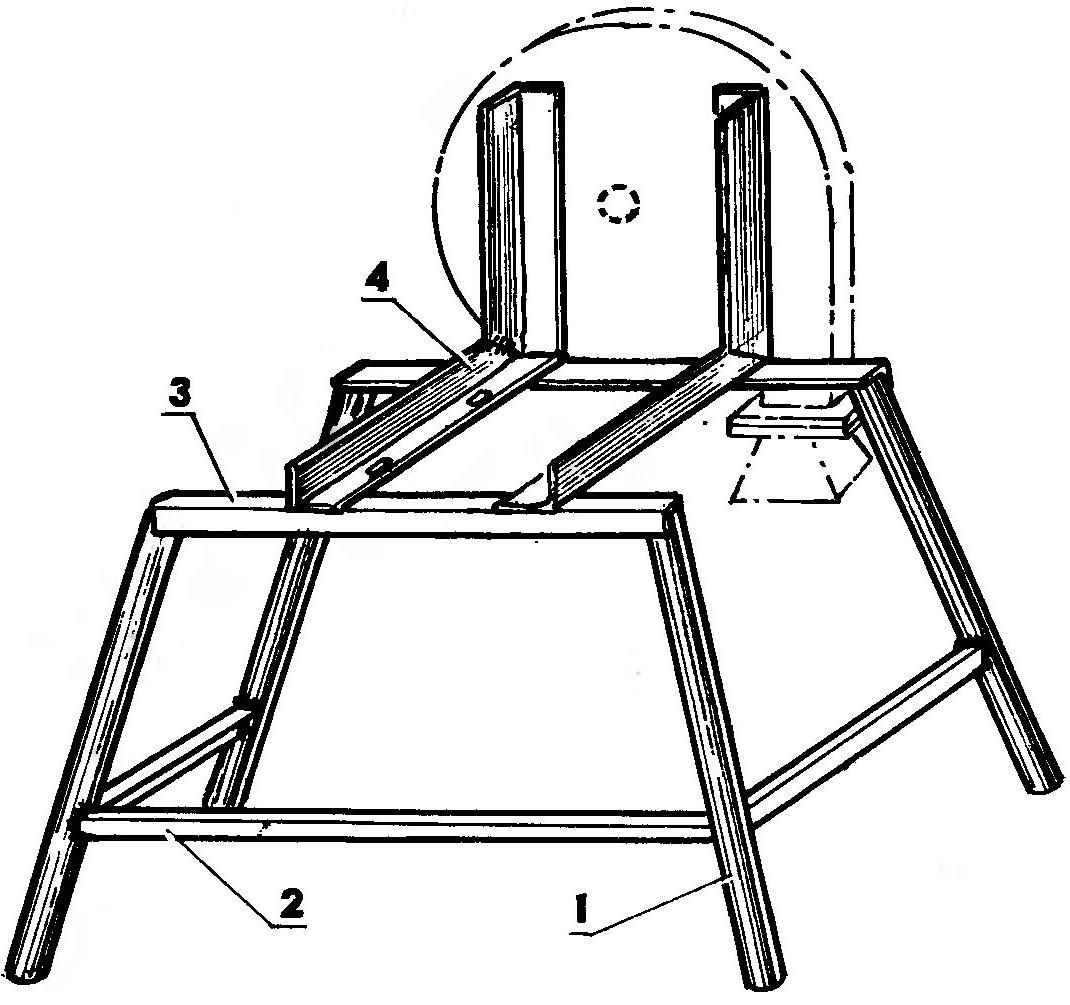 The rotor is planted directly on the motor shaft and pursed his screw M12x1,25 washer, screwed into a preformed hole in the corresponding end of the shaft. The screw stalled in the following manner: from the center of his head at an angle of 45° to its plane drilled a 5 mm hole with it in the body of the sleeve, and then in the hole put a piece of wire from the electrode. After installation of the working organs in the body shut the lid.

The rotation of the rotor with hammers had initially provided counterclockwise (in the direction “snails” — the visor was also welded on the other side of the window). But while discharging the hopper of the grain flew back out of the chamber through the hopper in different directions. It was disappointing for me. Began to look for the cause and the remedy, — change the direction of rotation of the rotor disconnects the power supply phase of the motor, visor digested on the other side of the window, and it went. Even when empty the hopper to throw a handful of grain — it is no problem sucked into the chamber and fully recyclable.

For crushing of grain to feed the cattle, set the sieve with large holes (7 mm). To obtain a bread flour with bran and put the sieve with holes 2 mm. After that, the wife still sifts the flour through a sieve with cells of about 1 mm. reinstalling sit for 15 — 20 min.

In a crusher and grind large grains (corn), and small (even millet), only in the latter case, the flap opened on the third. But the crushing of oats sieve is removed entirely — when the shredder it turns into a cotton-like mass. The grinder grind even, dry clover and hay (for feeding young), adding them together with the grain. Gets in the grain weeds: head of sow Thistle, quinoa, straw and whole ears of corn — all crushed to pieces and goes to the cause. 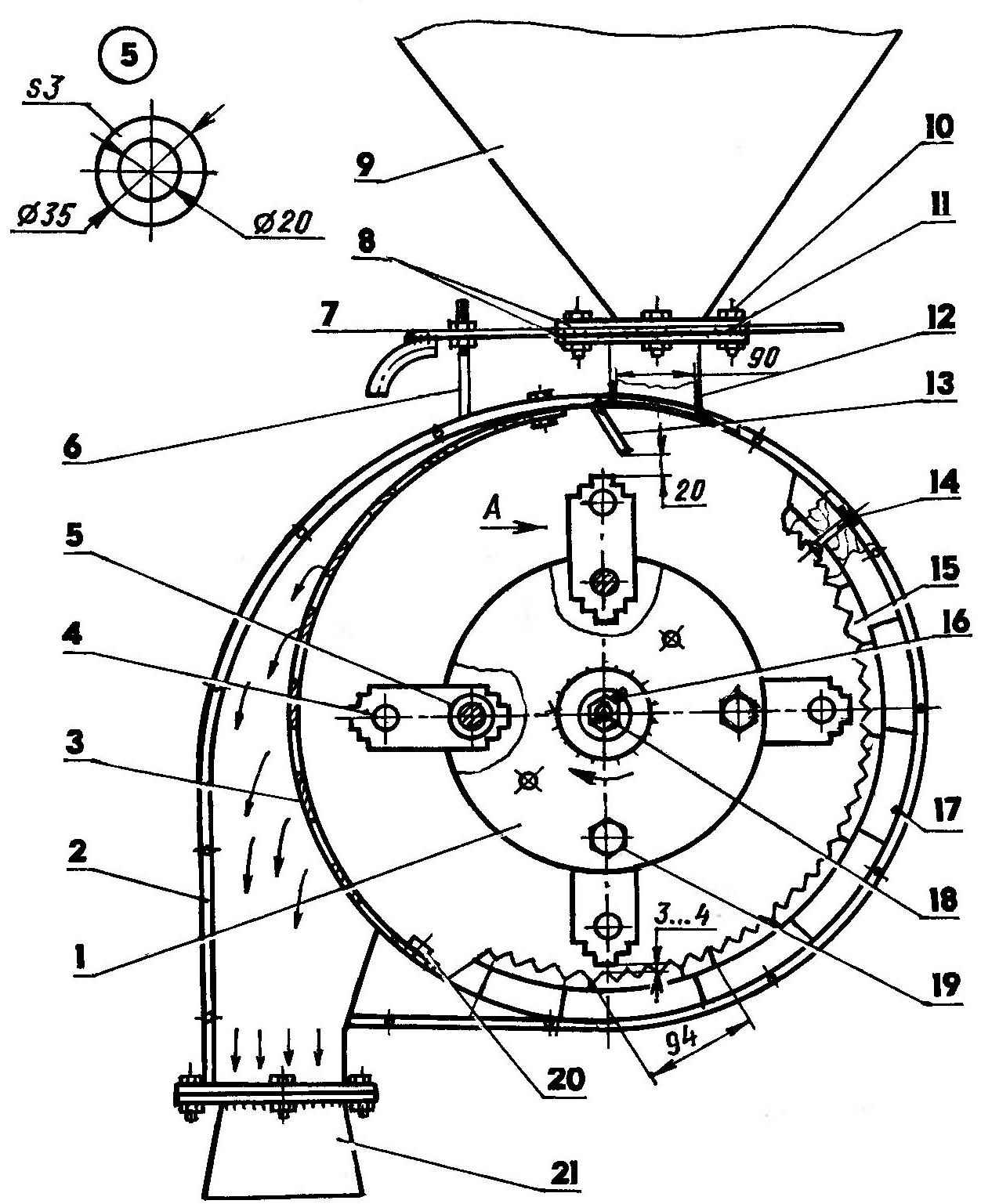 The design of the crusher (side cover removed):

Loading grain into the hopper is carried out manually yet, though there is the idea to mechanize this operation.

In five years of operation, the unit did not disappoint. However, the hammers have already turned, and now moved them to the other end.