As you know, Central Russia — a zone of risky agriculture. The late spring frosts, the “acid” summer rains, early autumn cold… in short, without a greenhouse on the plot is not enough. Otherwise they will not ripen there no cucumbers, no tomatoes. Of course, if we are talking about the same bed under the film is a small problem. Now in stores you can buy a set of parts of a light metal frame, assemble it, cover with film and the greenhouse is ready! Another thing, if you want to make the greenhouse more — it will require the construction of a strong metal or wooden structures, and eventually the construction will cost the farmer a pretty penny.

However, to make the greenhouse, it is not necessary to use traditional construction methods. We offer you to apply for this experience in the production of tent structures. Such structures are extremely economical: in the simplest case with a single rack and a dozen stretch marks can cover hundreds of square meters.
Before you two greenhouse type tent. First — with one Central and four peripheral columns. They can be made of any suitable material — the wooden stakes or poles, steel or asbestos cement pipe. Under each of the stands will need to build a simple Foundation. To do this, just choose to manually drill the hole with a diameter of 0.35 m and a depth of 0.7—0.8 m, lay in her rolled steel roofing and fill this makeshift formwork concrete mixture. Until the concrete has hardened, it lay the reinforcing rod so that the surface was about 100 mm — it will lock when installing the racks.
The same base line anchors are laid in places where they will be fixed backstay of the tent greenhouses. The only difference is that instead of the reinforcing rod laid in the concrete loop of steel wire with a diameter of about 6 mm.
On the upper parts of racks is necessary to provide eyelets for attaching braces on the uprights of steel tubes to weld the brackets of the reinforcing rod with a diameter of 8 mm and easier to drill a few holes. For wood or cement stands will have to make yoke from a steel strip welded thereto brackets of the reinforcing rod.
Ready rack mounted on the base bars and secured to the flexible portion of the frame (overlap) — for this you will need steel wire, wire rope, nylon rope or even a folded several times a strong synthetic twine. Fitting them on the racks should be very nadezhnoi because the load on them is very significant.
Lines — of the same material that is on the floor. You only need to provide a mechanism by which the pulling of a “tent”. Of course, this is best done through a tender — screw devices. In the simplest case, such a thunder constitutes a bolt with a nut on which is mounted a pair of lugs bent from steel strip. Even easier, the tensioner of wire between the bar and the anchor pull not less than four strands of wire, after which they miss any of the ratchet and twist with it, an impromptu thunder similarly, you can make thunder and of nylon rope or synthetic twine, only after twist to securely lock the knob. 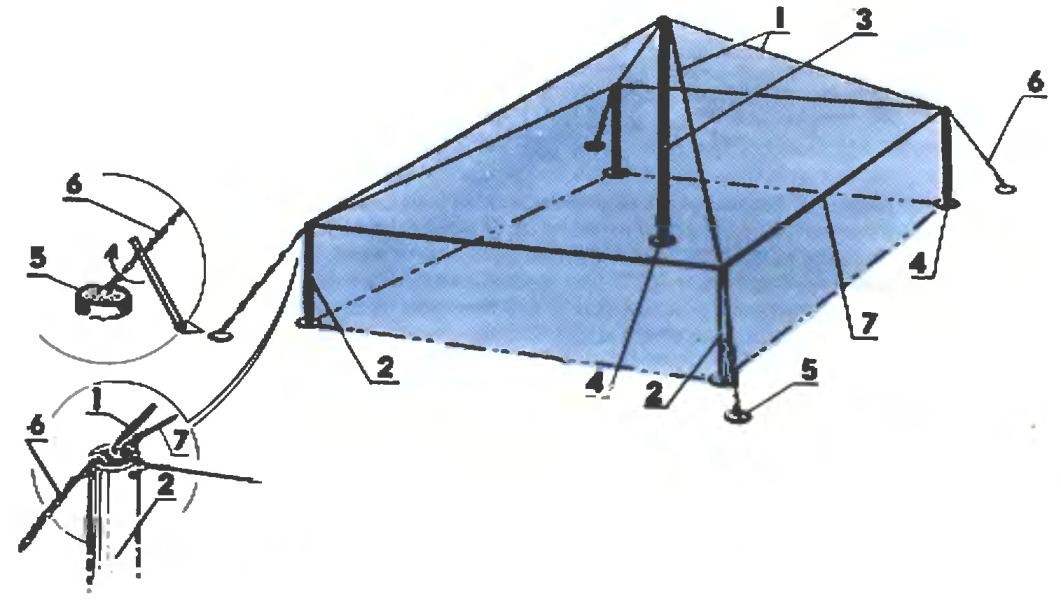 The square frame of the greenhouse” covered by the mesh of Sugata before laying the film. 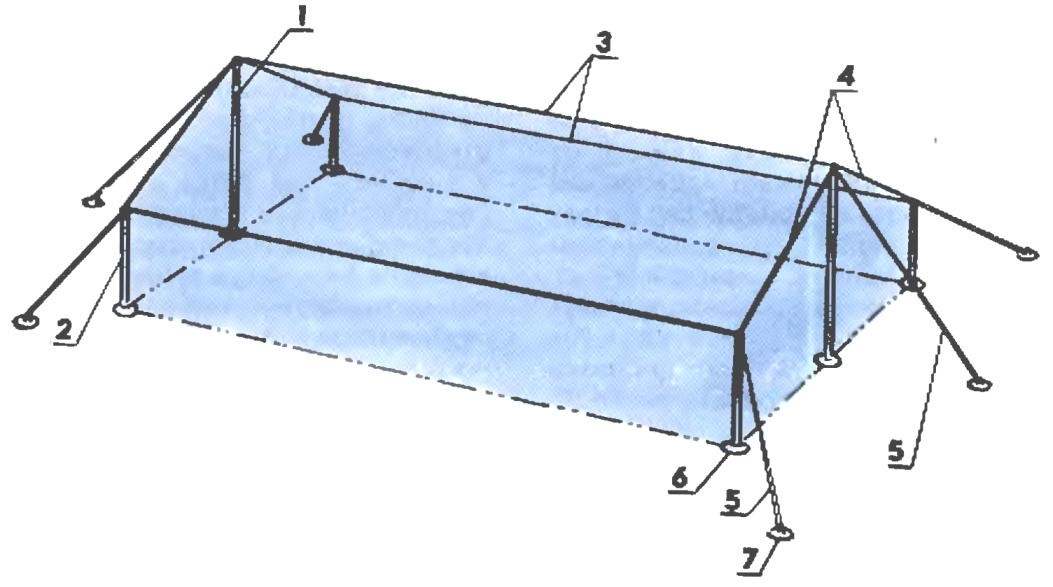 The rectangular frame greenhouses covered with mesh of twine. 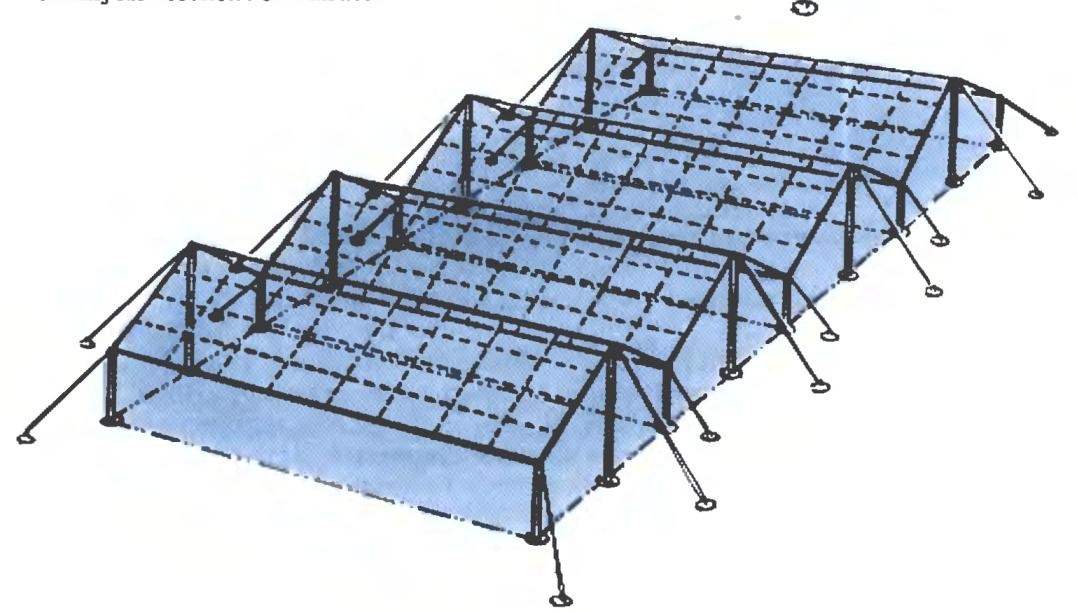 Greenhouse field, collected from a rectangular greenhouse type tent.
Now you need to take care of “framing” and “furring” of the flexible roof. The best material for this synthetic twine, using it on the roof stretched a kind of grid on which to build the plastic film.
Cloth tapes are glued together with wide adhesive tape, which not only binds them together but also significantly hardens the transparent roof.
At the end of the construction of a plastic coating is secured netting of twine, stretched over the film the Way the latter will serve as a long enough to dismantle it if at the end of the summer. This would be easy, because film is fixed on the frame just a rope net.
If the station needs a bigger greenhouse, you can use the second design, different from the first not only in size but also lack of b-pillar. All structural elements that greenhouses, as well as the method of its installation does not differ from that described above.
It should be noted that the tent greenhouses can be easily merged, forming the whole field under one transparent roof. This quality will prove to be invaluable for greenhouse farms engaged in growing flowers and vegetables. Scheme for greenhouse field figure
I. KARAMYSHEV