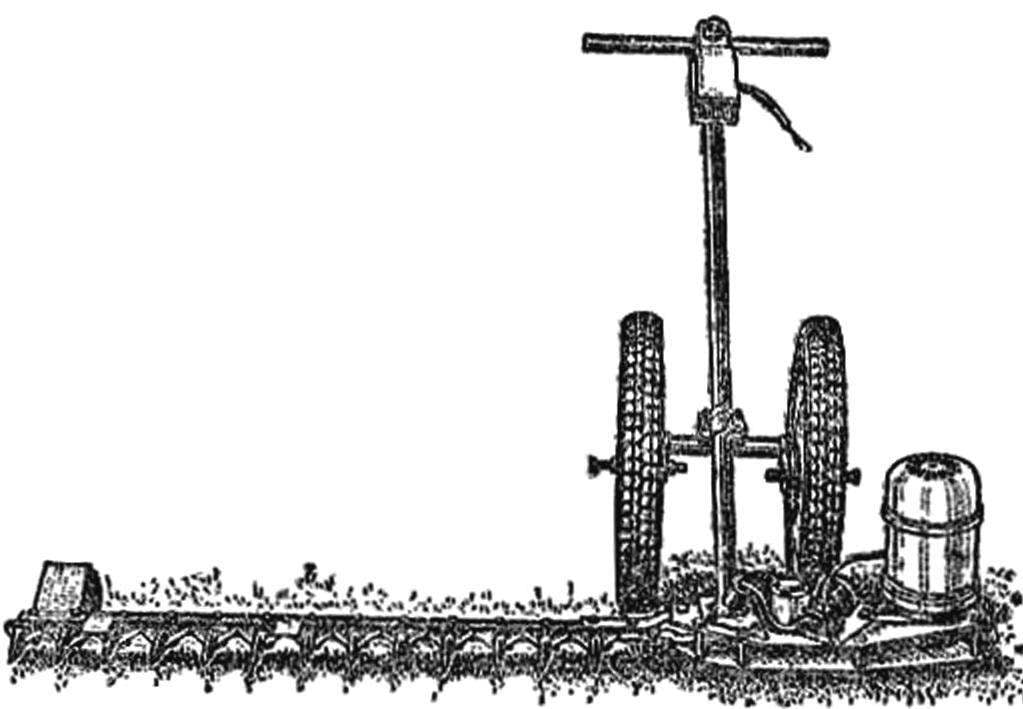 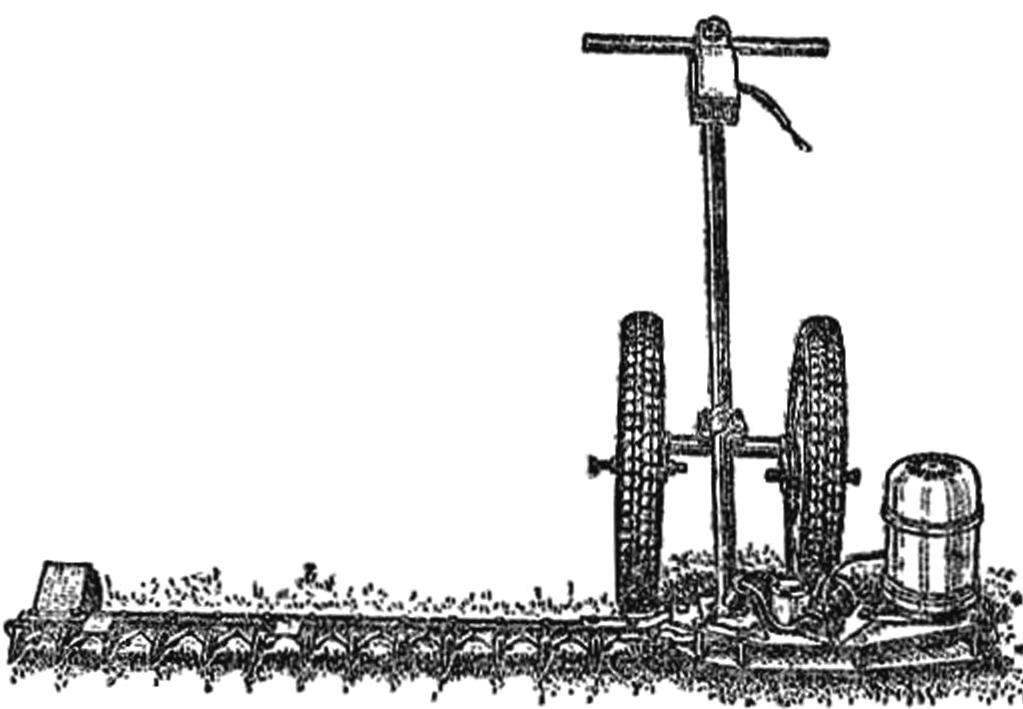 The reduction in the header is clear: GK — mower; unit refers to the width of one meter. So, without any complaints, called their machine with electric drive technology from a young city M. Volgograd region. “Our lawn mower, write the students last year at regional competition “Young innovators — the village” won first place, and at the all-Russian rally of student teams in Voronezh — the third”.
Indeed, the Assembly is simple in design and in service, maneuverable, and also, importantly, made from discarded parts of old harvesters. Health mowers guys say: “one day to cut my grass with an area of 2.5 ha.”
With the design of the mower GK-1 introduces the head of young technicians from Michael’s training and production plant Vladimir Ivanovich Popov.
In appearance it resembles a small cart with wheels from the moped is rigidly connected segment inch pipe. Management — long handle-carrier, as it is called young designers. At the lower end of the carrier, the ground — rendered forward frame of sheet steel with attached units and mechanisms that are directly involved in the mowing: it’s the engine, cutting apparatus, transmission.
The engine on the GK-1 is an electric power of 500 W from the pump “don”. It can be moved in the slots of the frame that allows you to adjust the tension on the timing belt. Electric part is also taken from the pump. It is placed on the carrier. (Remember: the handle of the mower needs to be safety isolated, for example, they can wear cuts of rubber hose; also, you must bring grounding wire!).
For the manufacture of mower we have used the segments of the blades and parts of backs, as well as sections of the fingers from the end-of-century harvesters. So, bearing finger beams are made from the back skin of silage harvester, preparig for rigidity with its back side at a 90° angle is still the same back. From harvester grain harvester used seven sections of the fingers: secured them with bolts M12 on the support beams as fixed teeth. From it he took the parts to a movable — cutting part. It’s gone 13 segments of the knife: they were enough to capture happened about a meter. Only the feet have developed and manufactured themselves.

Mower GK-1 and its kinematic diagram:
1 — wheel, 2 — motor, 3 — led, 4 — frame, 5 — connector, 6 — bearing housing driven shaft, 7 — panel, 8 — clamp, 9 — panel, 10 — finger carrying bar, 11 — movable knife, 12 — wheel, 13 — drive pulley Ø 60 mm, 14 — belt 15 — slave pulley Ø 150 mm, 16 — rod, 17 — a leash, an 18 ground wire, And — the kinematic diagram of the actuator.
The kinematics of the mower is simple: the transmission from the drive shaft to the driven pulley — V-belt, both pulleys fixed on the shaft of the console. With the outer surface of the driven shaft eccentric set, informing, using rod movement to the movable skin — the rotation of the motor shaft is thus converted into reciprocating motion of the knife and mows the ladder, working his 76 mm.
At the edge of the cutting unit put the support wheel to help you manage the mower. It also helps to keep constant the height of mowing.