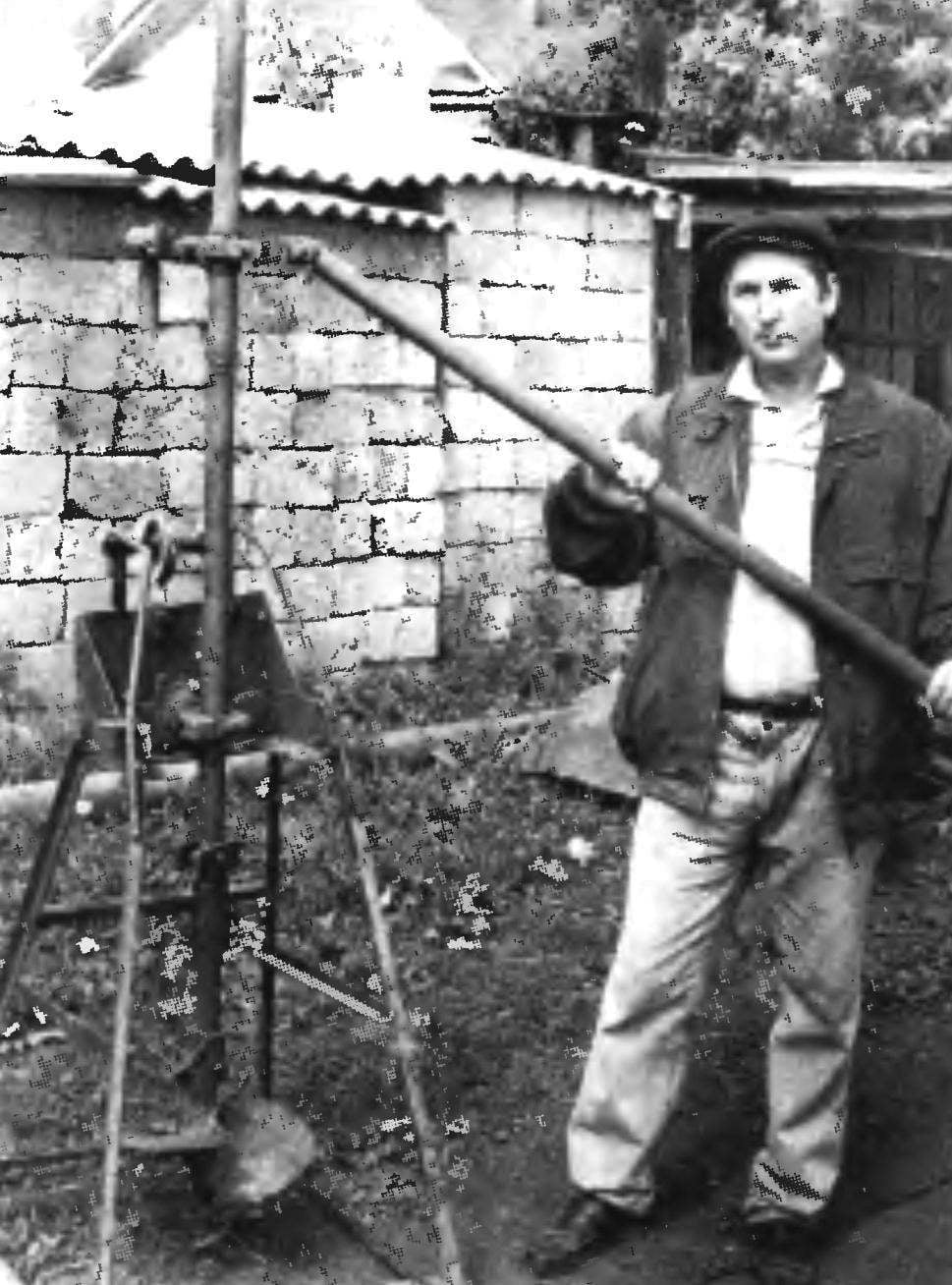 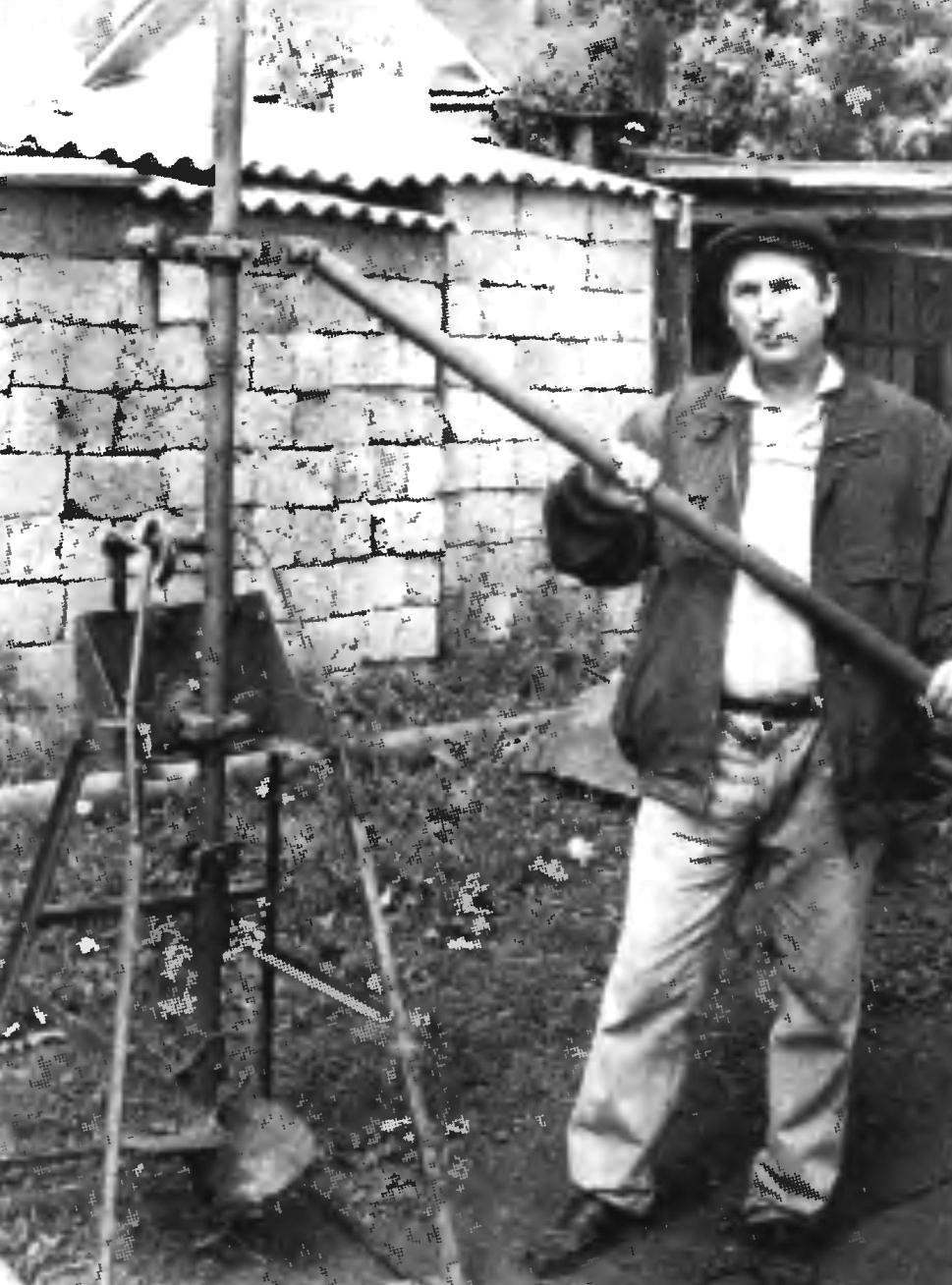 Many people, especially those who live in rural areas, had to build, and those who had, perhaps still have, because man by nature loves to build is not only a necessity but a pleasure from the creative process. Here if it would be possible to mechanize here is a time-consuming work…
Drilling rig
The offered machine is used just to facilitate the work and improve its performance on the most difficult construction work — excavation. It can be used to drill wells with a diameter from 4 to 36 cm to a depth of 1.5 m (with extension rods drill deeper). The machine design allows to work both together and alone. This is important: a attendant at hand is not always the case. And although performance is reduced, but not half as it would be possible to assume, and twenty per cent, not more.
The farm wells are often drilled for cast-in-situ or precast concrete or reinforced concrete foundations. Useful the machine and for installation of poles (wood, steel, concrete) in the construction of various frame structures, the installation of gates and fences for the construction of various utilities — sewer, water, grounding, electricity, etc. So if such a machine is to stand idle from a skilled master, he will not.
The performance of the unit depends on the diameter of the working body (drilling nozzle replacement), soil density, depth of wells, number of employees. If you take the most difficult conditions (the maximum size of the drill, the stratum of heavy clay, one worker), then driving the 1.5-m wells (this is the optimal depth for shallow Foundation pillars in our climatic conditions) will require 40 — 45 minutes. Together — faster. Without a press, using only hand tools, to dig a hole of appropriate diameter in such depth just technologically impossible
The machine is simple to make it, having skills in design, easy. And the materials needed are few: a few meters of a 25×25 area on the frame, a little sheet metal on the headband and support, dozens of meters of pipe with a diameter of 42 mm on the drill itself, extending to him and the levers of rotation. From ready-made parts and components will need the tow bar from the car (I have GAZ-52), manual windlass, designed for a force of at least 500 kg (for lifting the drill), four pin-holder (you can use the teeth of the harrow) and augers of different diameters for drill bits. 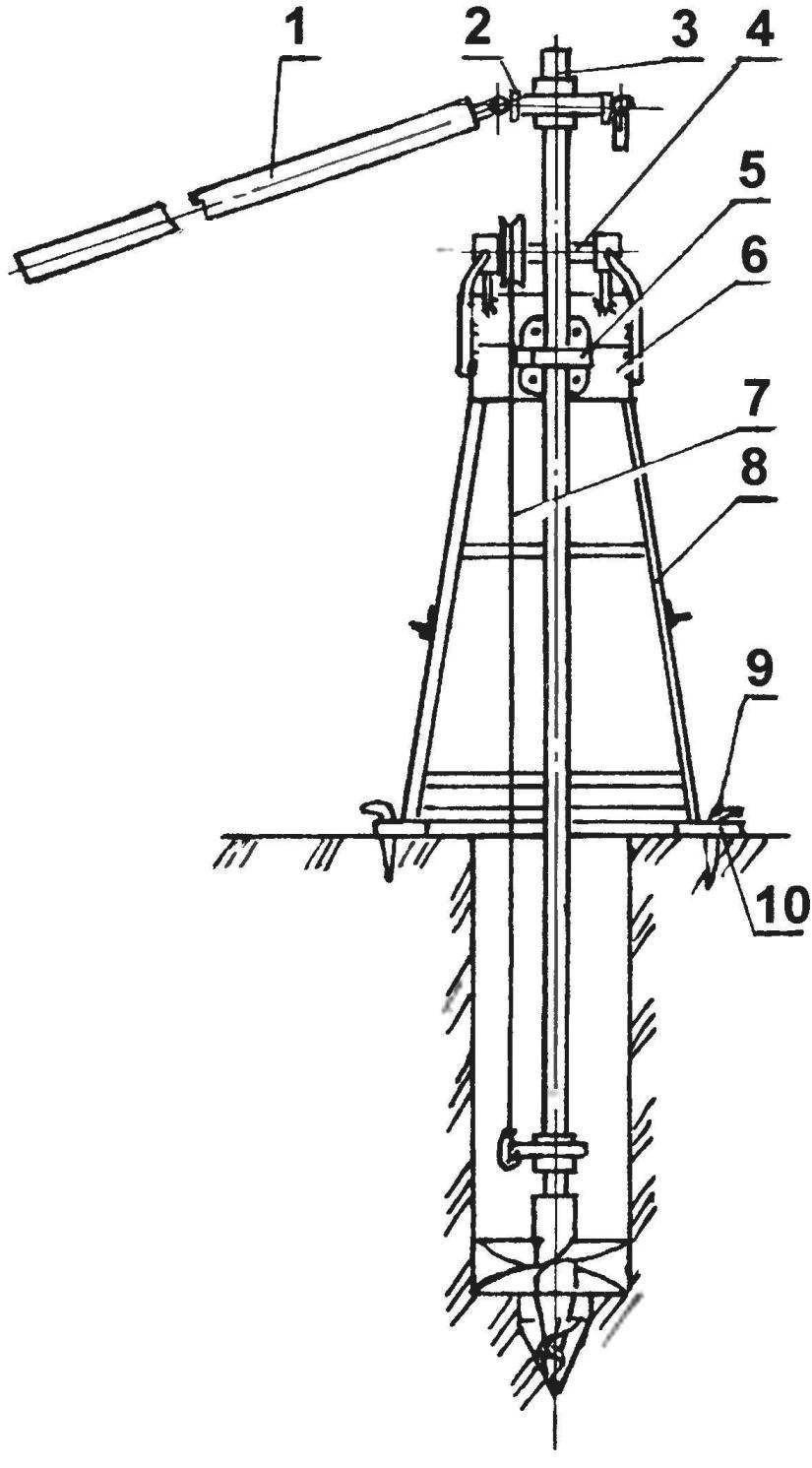 Fig. 1. Machine for drilling:
1 — the lever extender; 2 — swivel; 3 — drill in gathering; 4 — the axis of the pulley; 5 — hitch-conductor; 6 — the headband; 7 — wire rope hoist; 8 — frame; 9 — pin holder (4 PCs); 10 — pole (4 PCs.)
The main element of the machine itself Bur. It is the Foundation of a pipe diameter of 42 mm and a length 2700 mm. At the lower end of the pipe welded conical nozzle length 200 mm with welded screw it “snake” from a strip of metal 2 mm thick. “Snake” is a very useful item it ensures high performance as well as the opportunity to work on the machine alone. During the rotation of the “snake” itself tightens Bur into the ground — it does not need to make any extra effort (and I have seen similar structures on top of even put a person’s “weight”)
Replaceable drilling nozzles, with a diameter of 20, 28 and 36 cm; they are attached to the drill pipe through M10. You can run without the attachments, only the “snake” — for example, for grounding or bore of the driven tube. Knives nozzles are made of cultivator Lancet feet, sharpened and welded to the blades of the auger. Borax are attached to two small units: the suspension bracket, which clings to the rope of the winch when lifting and rotation mechanism of the tool. The design of these nodes is clear from the drawings. I will only add that hinged levers rotation is very convenient to use, otherwise it would always be necessary to move them as penetration, which inevitably would reduce performance.
The frame of the machine consists of four pillars, connected by studs in the middle and at the base. Stands are based on 5-mm plate with drilled holes in them for pins-holders. The headband is attached to the tow-conductor front and hand winch to lift the drill back. On top of the headband is welded on the support 2, which rotates the axis of the pulley, transmitting the tension of the cable from the hoist to the borax. 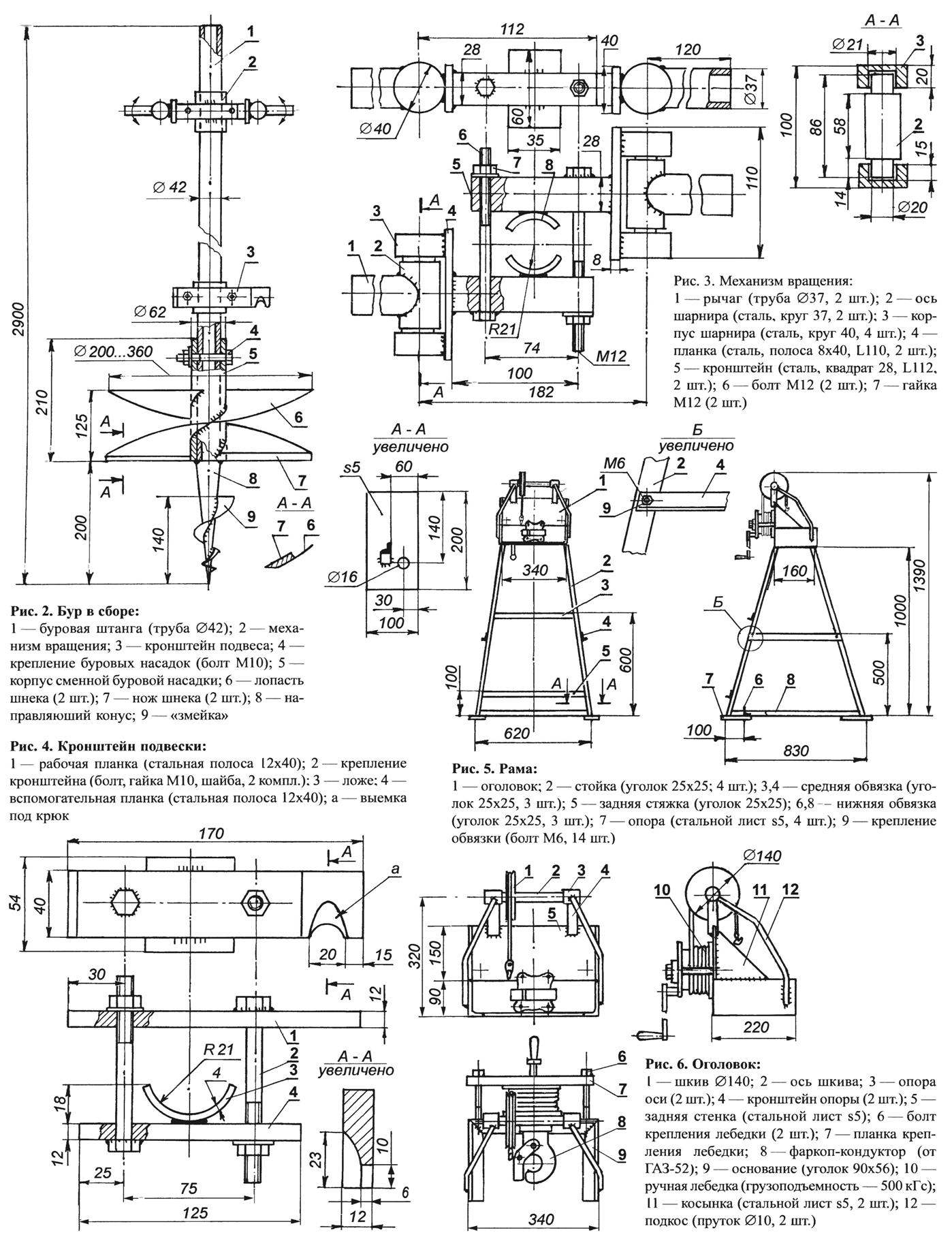