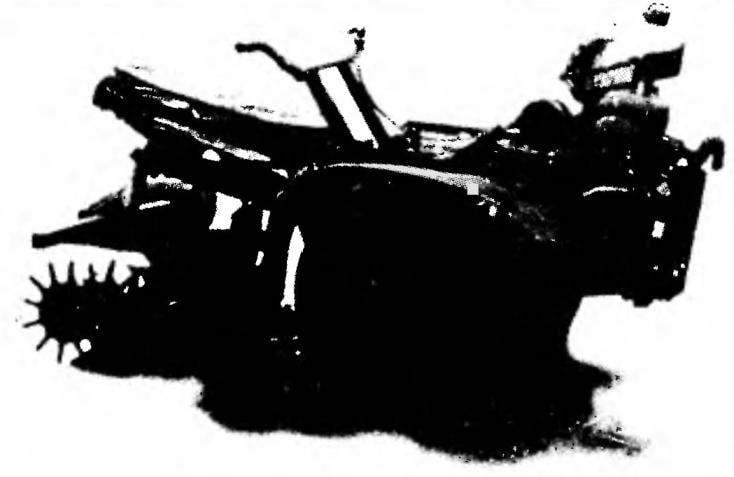 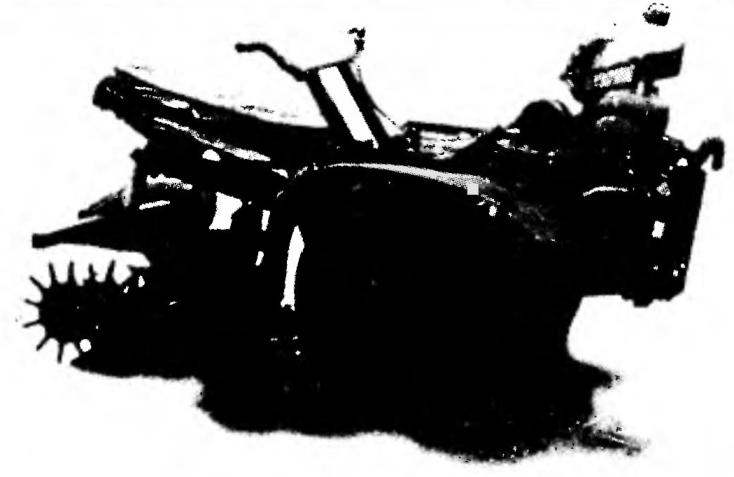 Aim to make brisk, reliable and compact tillers. This mechanical helper and was gardening, and the garden is plowed, and beds cut, and the potatoes on the home field were planted, and seedlings are weeded, and the crop was removed… And most importantly, to run this technique, sitting in a comfortable chair and never feel tired. Not to say that once, but the idea was a success. For three years my homemade motor-block (MB) is, as they say, faith and truth. I called it “Pony.” For endurance, reliability. The only thing he requires is gasoline.

Sprocket driven chains, is very characteristic of many self-made agricultural machines, my tillers at all. But regularly working, performing part-time function of clutch and tensioning the knot, V-belt transmission with ratios 1:2.2 and 1:1,5. Moreover, its implementation differs markedly from the original technical solutions, reviewed in the “Model con-struktor” No. 7 for the year 1991 (article “the Grip on the straps…”). Moreover, the role of the power regulator-clutch (belt tension) at the “Pony” is the main gear, which is rotatable.

Other features of my tillers I also want to note the rigid fastening of the coupling-rod on the output shaft of the main gearbox.
As in the design I aimed to do everything easier and safer, the MB had to give up the power unit (AA) T-200M — too much in it, in my opinion, nonsense. The quest for the best SA has led to fixed and ТД6М sedan engine capacity of 7 HP, which is a modern modification known since time immemorial PD-8 with the standard dual.
The important role played by the compactness of this SA, the availability of air cooling and built-in reducer with a gear ratio of 1:1,46. However, in itself ТД6М a number of changes. 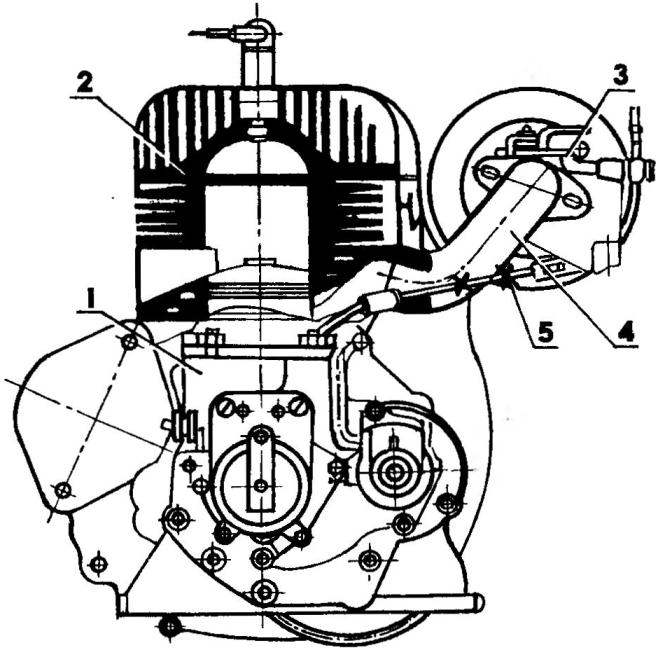 Upgrading the engine ТД6М:
1 —motor base; 2 — the cylinder head and the base of the intake manifold (from engine T-200M); 3 — carburetor base; 4 — intake manifold, base (“truncated” and welded); 5 — pull transformer (deleted as useless). 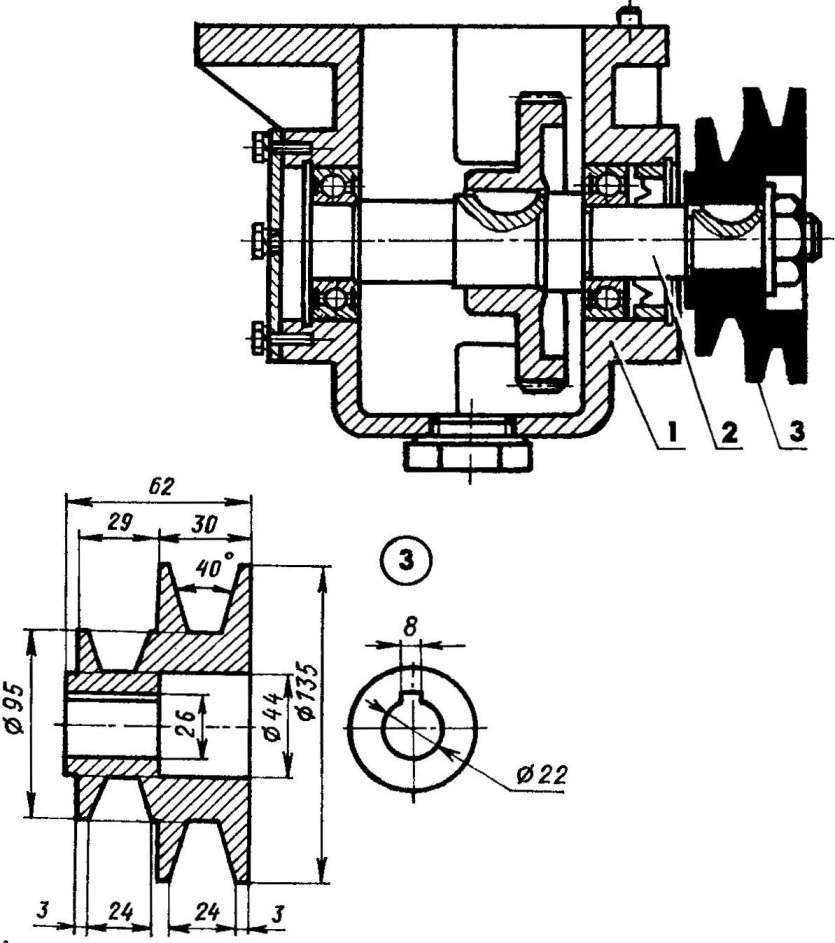 Finalization of the reducer built into the power unit:
1 — the case of the built-in gear; 2 — output shaft; 3 — a pulley belt transmission, the leading, two-speed, self-made (SCH20 cast iron or aluminum alloy АЛ8)
First of all, I had to replace the stock cylinder with the head on motorolleri (I have had T-200M). And as a result, engine power increased to 12 HP
The carb on the engine remained the same (К16Л), because it is reliable and easy to maintain. But for docking it with the Motorola-lernen cylinder had to work hard. Those who will decide on the same design, you will have to repeat after me in the same sequence the next operation.
First, cut the intake manifold at the base of the cylinder, and turning the severed portion of the manifold so that the carb was horizontal, put the label on both of the cut. Second, to remove these parts from the cylinder, gently combine them (the guides are labels) and clamped into position, weld, and then remove the resulting inside the reservoir scale. In addition, to whittle away all the bumps inside the manifold first, a round file, then using a small device, described at the time in the journal “modelist-Konstruktor”. Based on fixtures metal 8-mm tube length 150 mm. On the end of it with a hacksaw is made to a depth of 15 mm propyl, in which clamp sandpaper, folded in half with an abrasive layer on the outside. Inserting the fixture with the tube shank in an electric drill Chuck, handle the first major surface with emery paper, then fine.
Cleaning up intake manifold upgrade SA ends. Required, by disconnecting the rod speed controller (in this design not necessary), to replace the stock drive pulley new, carved under the profile of the belt that you want to use.
Drive pulley — double-strand with varying diameters. When operating the walk-behind this allows (by transferring the belt from one to the other) to obtain two speeds of movement: transport (12 km/h) and labor (4.5 km/h).
After you install a makeshift pulley in place, fill the gear oil and connect motorolaring (from the same T-200M) muffler, modernization of the power unit ТД6М can be considered completed. However, to fully realize this SA technical ability necessary and appropriate main gearbox: strong, reliable and compact. And most importantly — he had the gear ratio as close as possible to the design specified during the development of the kinematic scheme of a cultivator (in my case 1:20). 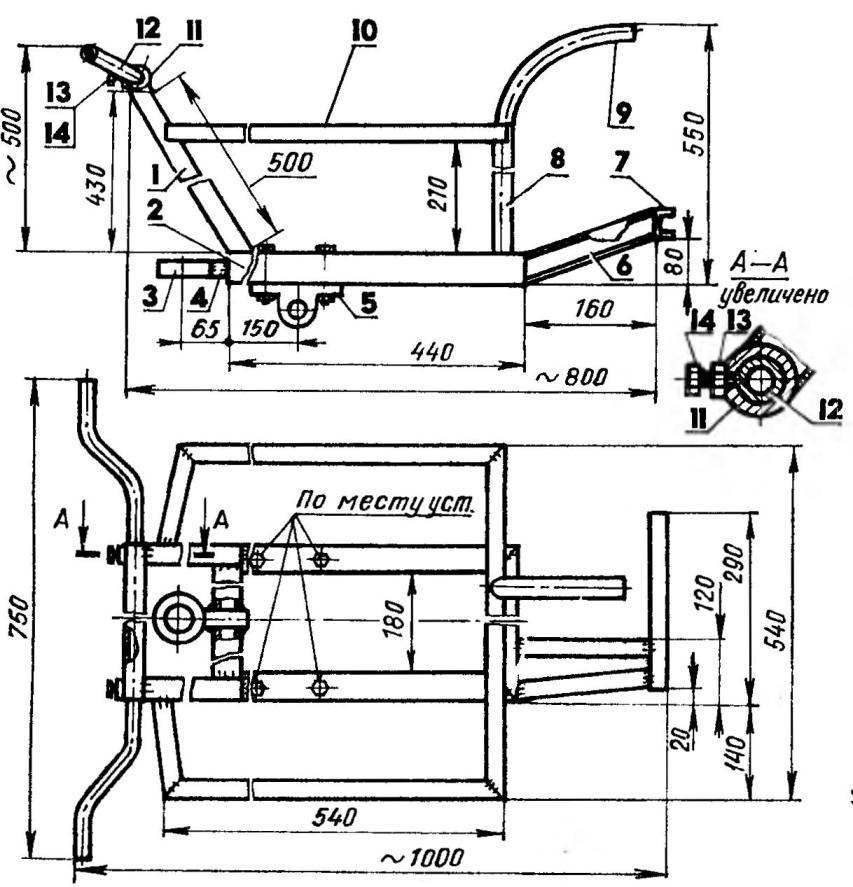 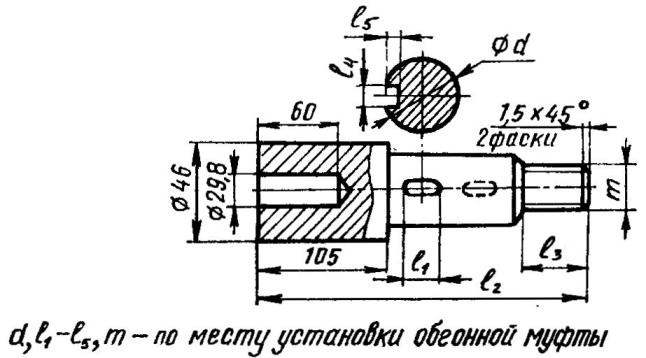 Right clutch-driveshaft (Ст6); the left position is the keyway.

The input shaft of the main gearbox (Ст6).

The output shaft of the main gearbox (Ст6). 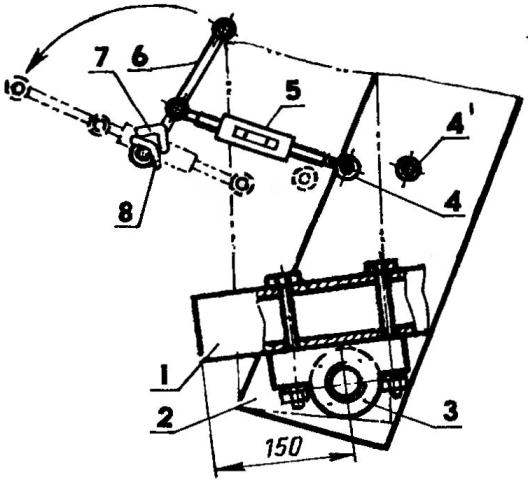 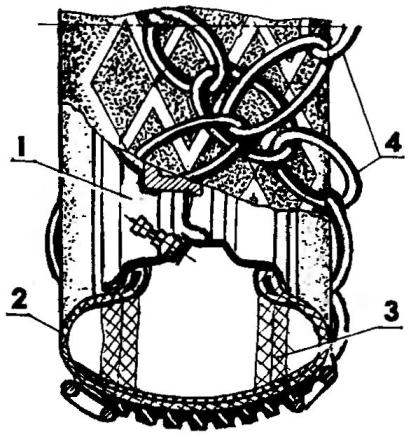