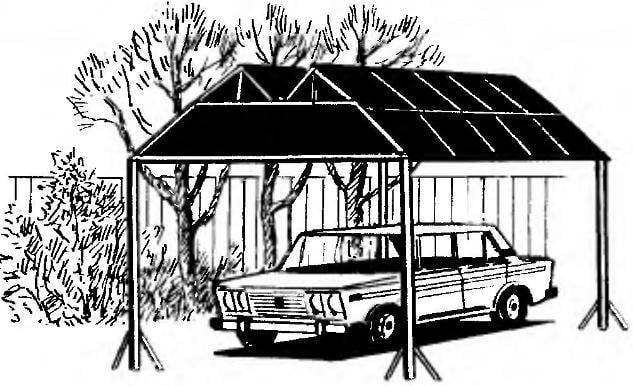 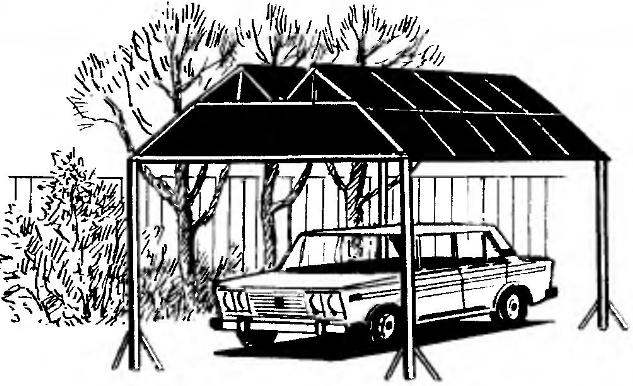 Plots is small. And when every square foot counts, then the space allocated to garages and outbuildings — not an easy task. An acceptable solution may be tent structures. Especially when considering time, especially material costs. To build the frame of almost any of the three options of awning, we have received the greatest distribution, will fit anything you have on hand: acceptable wooden poles, beams or even a pole.
But it is better for the frame to use steel pipe, angle or other metal profile. The dimensions must be such that under the future awning easily available up a car.
That the awning did not shade the yard, the roof is desirable to cover the transparent film, as in the greenhouse. However, in winter, the film coating does not withstand snow loads, so make it removable or just monogrades. 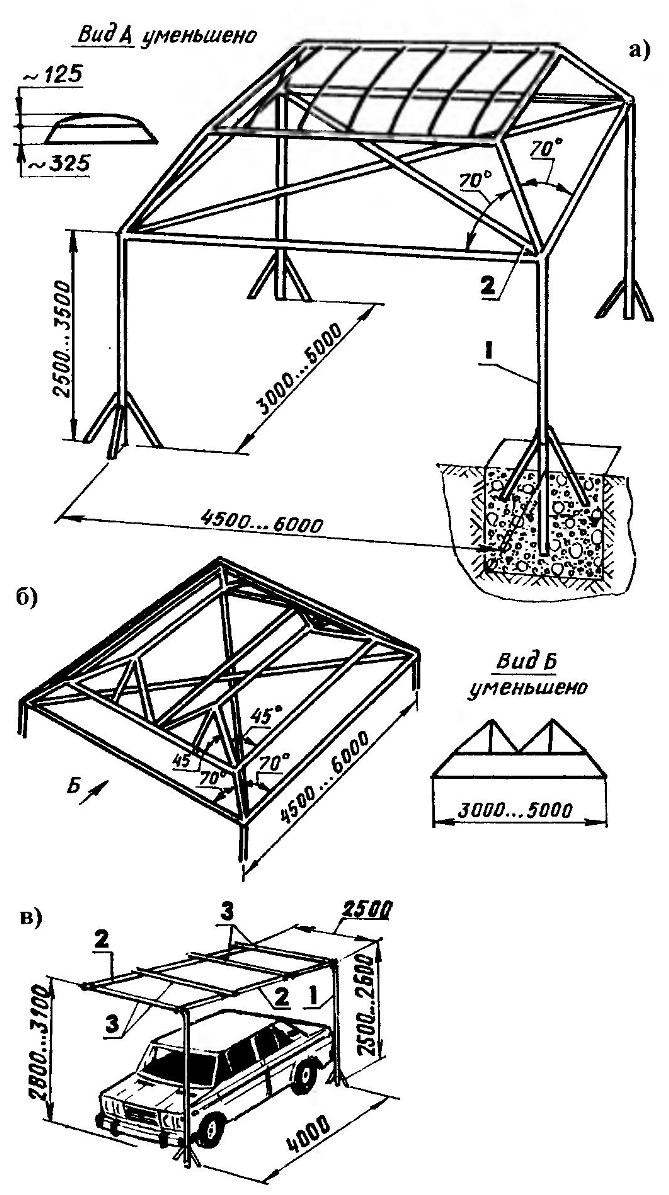 Convenient and practical awnings:
and with a streamlined roof; b — duckncover; — suspended ceiling: 1 — dug or driven into the ground riser Yoshinari; 2 — prop-ties; 3 — cross; cording or trim conventionally not shown
And it is better to replace a light film on the metal roof or slate sheet. This material is strong and durable. Moreover, the plant is so resistant coatings will not require a lot of time and effort, though will cost more expensively.
The option of an awning with a streamlined roof (a) is preferable in areas where winds and precipitation are not a rare phenomenon. Duchkova overlap (b) wins by high strength (in cross-section because solid triangles that are geometrically rigid figures) and the relatively small magnitude of slopes. But the presence of longitudinal “troughs” threatens the accumulation of fallen leaves and other debris caused by wind.
If you want a tent of small size (for example, in order to hide the car), then an acceptable design (in), consisting of two pipes-pipes, curved and bonded to each other with a strap on wooden cross-beams overhead for subsequent covering or sheathing. This marquee canopy can be closed with a film partially and the side.
Driven (hammered, and even better — concreted) rack-support must have lateral strut. Moreover, with the increase of the capacity of the tent (especially when it is lengthening) the number of such sets should be increased.
In conclusion, a few words about the technology stitched tent with foil. In fact it is no different from similar operations on the “glazing” double-layer polyethylene greenhouses, thoroughly and more than once set out on the pages of “Modeller-designer” (see, for example, No. 3 in’99 and No. 6′, 2000 journal). However, it is worth mentioning that the film is recommended to nail to the beam-based, not directly, but through the rail with a thickness of 3-4 mm. should not strive to achieve the “drum” of tautness. After all, the best is the close-fitting, made with a barely noticeable SAG (film, cutting in the cold and losing its former elasticity, may crack).
There is no doubt that the awning is mounted, say, on a repair platform in private households, or in the country, is a good protector from the vagaries of the weather. Having it, even in bad weather you can use the workbench, welding machine for carrying out any repair work in more comfortable than before, conditions.
V. RYBALKO, Naberezhnye Chelny, Tatarstan