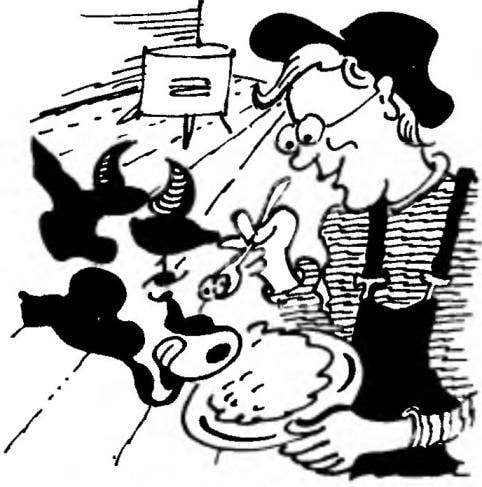 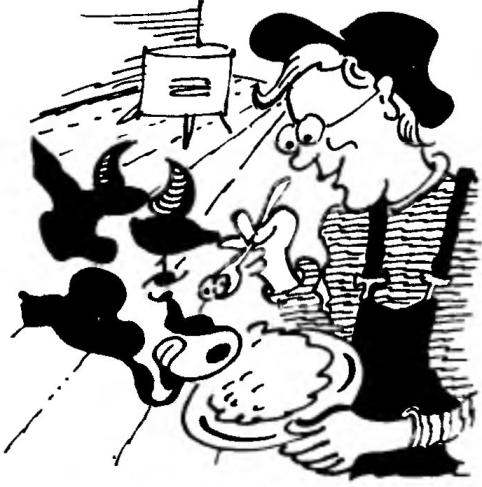 Wags say that invention, they say, are born from laziness. Maybe they’re right. I tired to cut the tops and chop the root vegetables for domestic animals manually — set about creating an electric shredder feed. Memory told where to find the prototype: of course, among the developments of the journal “modelist-Konstruktor”. Indeed, the number 12 in 1992 found a description and sketch Assembly “lubarsky for cows”. But the cone-shaped cups from the separator, which served as the basis of the unit in my possession was not. But there was a sheet of the stainless steel. Made from it a cylindrical “bucket”, which became the shredder feed. And the bottom are made with a flare — for a better connection with the side wall (welding face) and increase the stiffness of the whole structure.

“Prefabricated” case reinforced from the inside varnum rim of the same “steel”. Almost at the bottom cut a rectangular window for the output of pulp, framed by the sides of the slider, which later put the valve supplied outlet socket.
The housing is mounted on a tripod, a simple welded node of the three segments of a steel angle with thrust bearings and a round top with (as, indeed, and the bottom “bucket”) hole with a diameter of 80 mm. Made strictly according to the center, it is durable for docking the entire structure with the flange of the engine.
For security (so no one is stuck working at knives avoid any temptation to help them) and to prevent emissions of the material processed at high cutting speeds supplied protective case cover with funnel-shaped Central hole for the feed.
Now on the cutting unit. Located inside the housing on the motor shaft, it is intended equally fast and finely Sich as the grass and roots. This means that floats, strings, grinders and chain bits are absolutely not acceptable. Need steel moving at high angular velocities and well balanced knives. The form and the arrangement in the cutting unit should be such that simultaneously with the cutting-sharp happened, and the rotation of the processed material with the displacement of the bottom layers to the top.
All these requirements could not be better satisfied, I have developed detachable design (keyway face fixing on the shaft). It comprises a sleeve-base to which the bottom is soldered “rotary” blade-propeller, and on top of the four pins (to facilitate Assembly and deconstruction operations and sharpening) attached to the main chopper — knife combo. Moreover, its vertical blades are installed on the studs with the mandatory raskladyvanii each in the nest and final propanol (silver !) places docking. A suitable blank was a steel 3-mm fabric two-handed saws. Optimal sharpening angle for blades — 170. 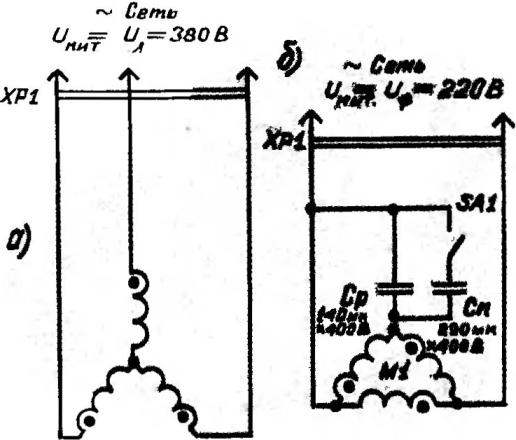 Options for the motor connections three-phase (a) and single phase (b) of the network. 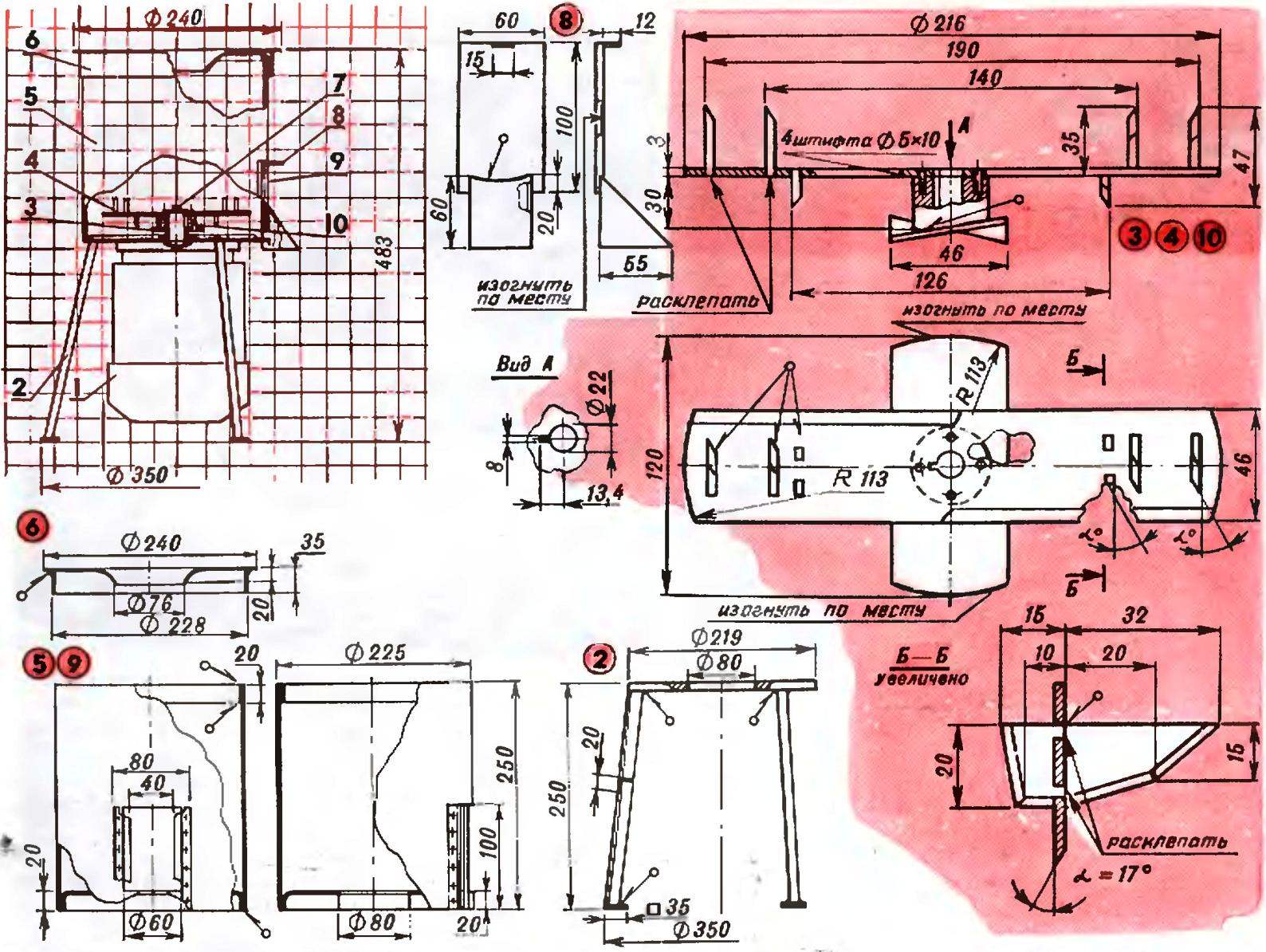 Homemade electric fodder cutter (remote control with phase – shifting capacitors and screws M6, fastening a tabletop tripod and the bottom of the housing flange of the motor, conventionally not shown):
1 — motor performance АИР80А ІМ3641 with the key on the shaft; 2— a tripod (20×20 steel angle and sheet steel s4 and S10); 3 — knife-prop; 4 — knife combo; 5 — housing; 6 — cover funnel; 7 — M6 screw; 8 — valve with a flare for the production of pulp; 9 — rails-rail (2 PCs.); 10 — sleeve-base knives (steel pipe 38×8, L30). The material of the parts 5, 6, 8 – sgal-“stainless steel s1,5;3,4 – steel but ovocneho cloth s3.
The fodder cutter uses a 1700-watt motor АИР80А2 performance 1М3641 synchronous rotational speed 3000 Rev/min (Cos?=0.85 and coefficient of 0.81). Plugs into trefas-ing network (normal mode, the connection of windings “star”, = Il = 380). But a possibility for connection to single-phase domestic network (“triangle”, Usup = If = 220) via the launcher working SP and CP capacitors, capacity of which (in microfarads) was found by the formulas:
MS = 4800 (1/Range),SP = 1,5…2Ср
The need for these calculations, the current I (in amperes), determine, using the specified in the data sheet or on the terminal plate power values P (W) efficiency g) power factor of the motor Sof, from the formula:
I = P/(1,73 U??Cos?)
As practice shows, as the phase-shifting capacitors, it is desirable to use a paper — type MGB (MBGP, MGBC), designed for a working voltage of at least 1.5 to 2 Range. But bolsaescola among them —a rarity. Have to settle for a set of capacitors from a standard, common range: from units to tens of microfarad, coupling proven instances in the battery Do it with the given ratios:
C total = C1 + C2…+CN parallel
1/(C total) = 1/(C1) = 1/(S 2 )+…+ 1/(SP)a series connection of capacitors.
Although АИР80А2 and acts as a kind of electrical “heart” of the whole structure, to work it in a continuous tense is unlikely to have. So, you can do without special fuses, relays and other elements protect the motor from overloads. Well, if that “flare”. then immediately work network machines, de-energizing everything, including an electric fodder cutter.
However, I have no PE related expluatacia of elektroizmeritel feed arose. First, because strictly observe the safety instructions (since the childhood learned: drain to be trifled with!). Second, inherent in the Assembly of high reliability virtually eliminates failures, and especially short circuits. After all, the engine applied is representative of the series AI, specially developed in cooperation with the countries of Interelectro for operation in unfavourable environment (dust, high humidity, sudden changes in temperature) To the same docking АИР80А2 with tripod-base and the housing fodder cutters made with the use of the seal (the last on the Assembly sketch is not shown).
In short, the fodder cutter its Creator fails. Performance it is also not overjoyed: bucket of broken rice gives for half a minute! Acquire and you are so excellent a master. Assure you will not regret!
K. STAKHOV