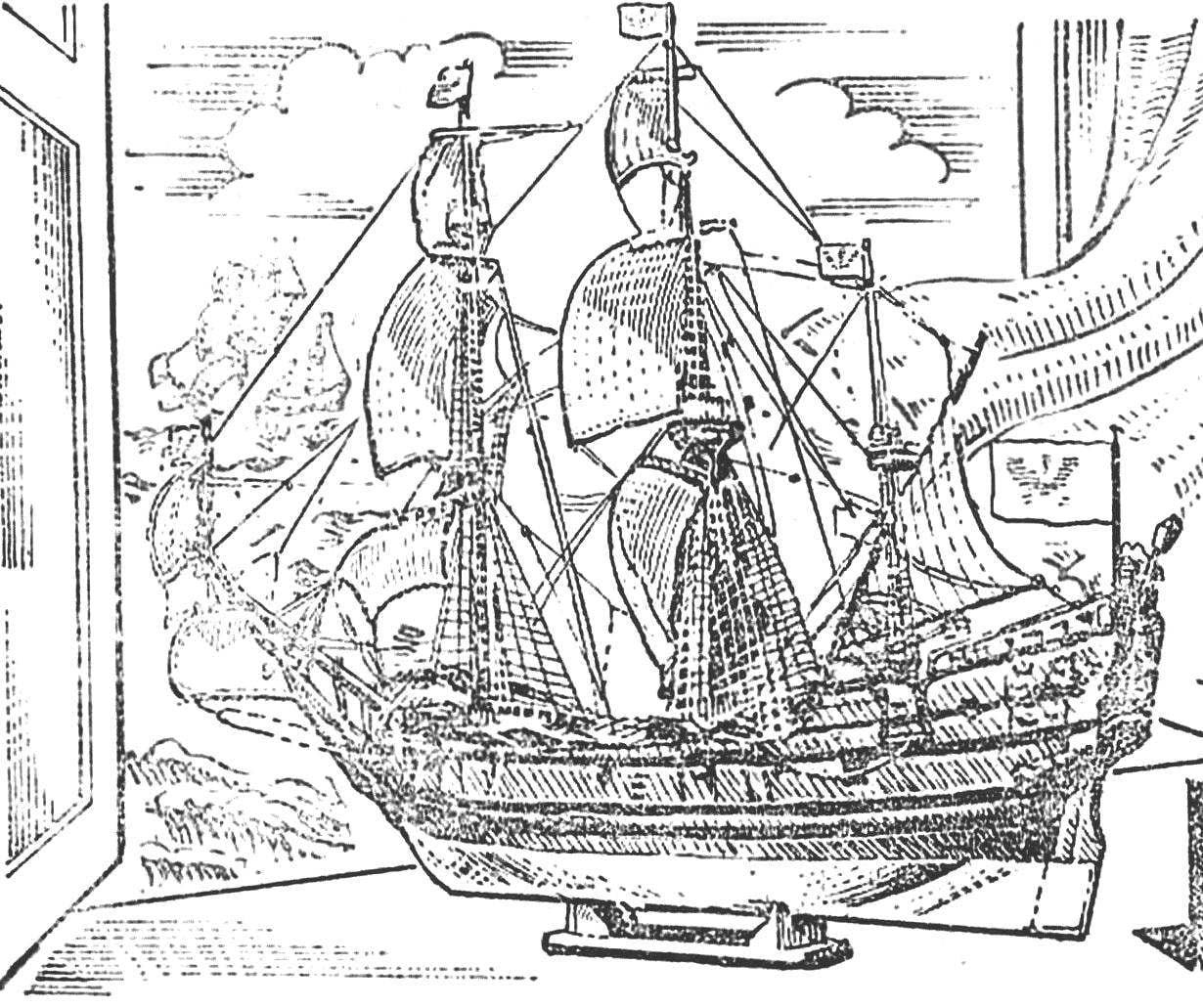 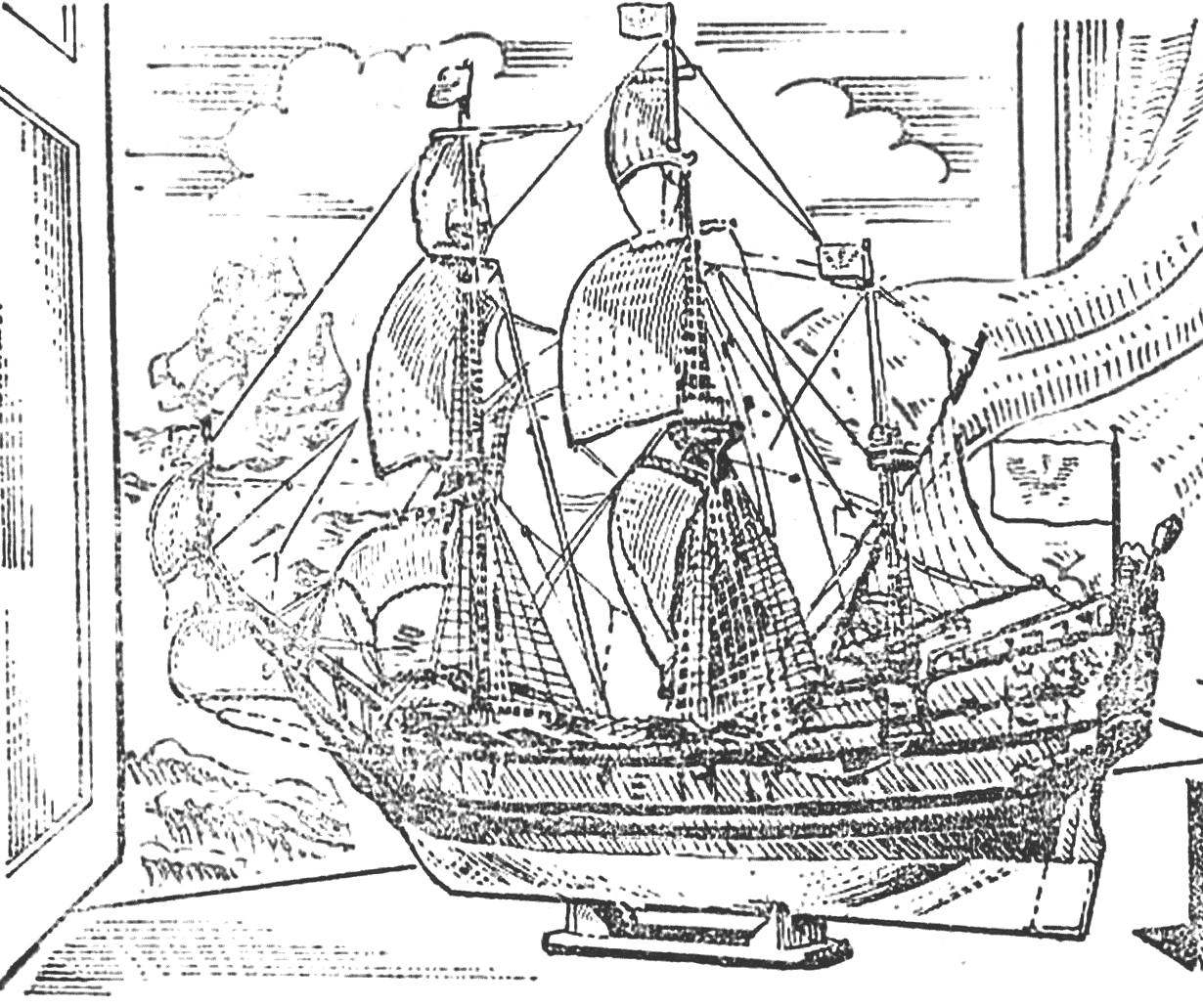 It is known that if two are going to swap, say, apples, then in the end they will still be an Apple. Well, if these two will exchange ideas, then each will have two ideas…
This idea is incorporated in the letter of our reader A. K. Kartseva from Yasinovataya, Donetsk region. About Aleksey Konstantinovich making models of ships and acquired this most interesting case a lot of experience. He offers readers a six technological and design tips and at the same time encourages modelers to share their experiences.
NOT SHARPENING, AND STRETCHING!
It is difficult to get a good accurate preparation for masts or yards without a miniature lathe. Yes, and the machine processing, for example, a round needle with a diameter of 1 mm is almost impossible. Well, I have a surgery treatment round wooden slats is minimalnie time because I do it with… advance.
The tool is made of a plastic school ruler by drilling it to a number of successively increasing diameter holes from 0,5 up to 8,0 mm. For holes of large diameter is made a small lead-in chamfer. That’s all.

First, the billet is processed manually with a small — about 0.2 mm oversize, and then pulled through one of the holes. Mast work at the same flat, smooth, constant along the length of the diameter. Choosing wood for blanks, keep in mind that a very well-handled in this way Reiki from aspen and difficult — from solid birch.
DO THE DEAD EYE
When making models of sailing ships, especially in the small scale, the most difficult to recreate small details: dead eye, blocks, pins and the like. Meanwhile, these elements provide the greatest “work” on the reliability of visual perception miniature replicas.
I did not call exactly replicate the existing dead eye 0 1,5…3 mm, especially with the wiring gear: this work is jeweler. This task can be greatly simplified without any loss of appearance of such items. And here is how. 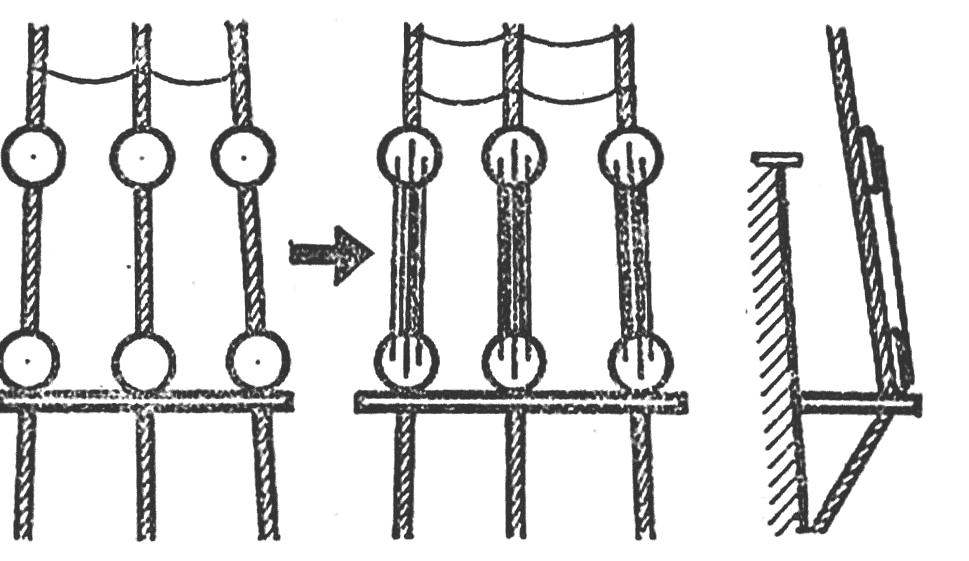 To start with pulling the calibrated rod of the required diameter. Then with a razor blade cut the workpiece of future dead eye — “checkers” with a thickness of 0.5…1.0 mm. Further “checkers” treated with stain (“oak”) and paste it on guys. Now the thread gets the necessary numbers. To stiffen her coat with PVA glue. After the glue dries, the thread is cut into segments in accordance with the distance between the dead eye and pasted by the same adhesive on the dead eye.
PUTTING BLOCKS
First you have to cut the billet rail section corresponding to the configuration of the future of the blocks, and then cut it into “checkers” of appropriate thickness. In each of the “checkers” caution manually drilled hole 0 0,5…0,7 mm.
Firmly plug in the resulting hole edge of the sewing — it’s more convenient to hold the workpiece and attach to the edge of the thread block, as shown in the figure. The unit is ready. 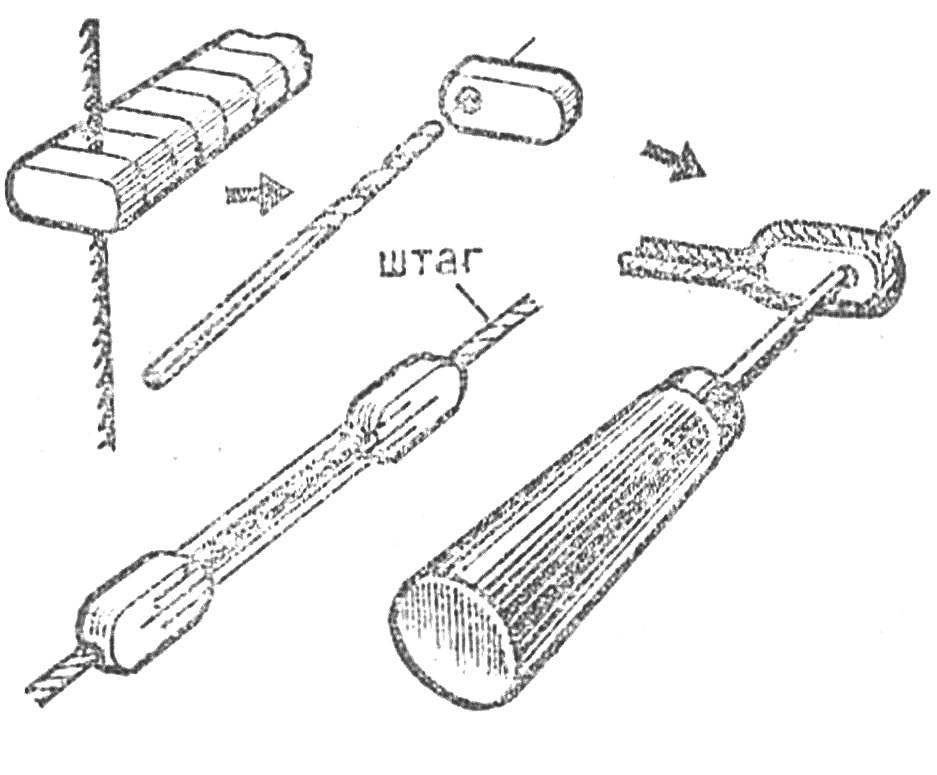 Similarly made blocks and stitched major weight, just a hole with a diameter equal to the thickness of the forestay, in that case drilled along the block. Now on blocks with the two sides attach of thread that simulates transaction blocks. Note that you can put these blocks on the stays need before attaching them to the model.
FASTEN GUYS

After posting the guys through rusling in the body with an awl nakalyaetsya small holes that are the same on the awl PVA glue zapressovyvajutsja tips guys. Keep in mind that it must be done so that the shrouds were stretched vtupuyu. After drying, the adhesive free ends of the cables are cut with a razor blade.
WOUND PORTHOLES
The window — or rather, his framing — the preferred make of copper wire, naviv it on a drill of suitable diameter. Moreover, the groove of the drill in this case will serve as the groove, through which a knife or thin blade can cut the turns of the spring ring.
FORGE” CHAIN
Procurement links of the anchor chain are also cut from a pre-wound spring. A mandrel for winding cut from the tree, and the dimensions of the rod should correspond to the internal size of the Link.
After coiling the wire is cut into links with astrosat secured a knife or thin saw blade. To assemble the anchor chain preferred two pincers.
A. KARTSEV, Yasinovataya, Donetsk region.