Torpedo and missile boats are the most popular objects for modelling among novice modelers — they are not so complex and multi-part, as the larger ships and vessels, besides because of lower scale factor to produce a relatively larger elements of such a model much easier.
Today we want to talk about the model of a boat belonging to one of the most interesting collections of missile boats.
In the early 1960-ies shipbuilders of several countries almost simultaneously started to create boats with missile weapons. One such state was France, moorezilla anti-submarine boat “La Combattante” (a displacement of 202 tons, the total capacity of the two diesel engines 3840 HP, speed 28 knots) anti-ship missiles, which were controlled by wire anti-tank rockets, capable of hitting small ships at ranges up to five kilometers. Modification of the missile boats was named “La Combattante 1”.
Taking the design of this boat as a basis, the French created a series of missile ships “La Combattante 2” 5— 8 launchers and 76-mm gun (or a 40-mm gun). In addition, instead of a couple of diesels at 1920 HP on the boat was installed four power up to 3500 HP each, informing him speed to 38-40 knots.
These boats were in service not only of France, but also Israel, and Greece.
In the early 1970-ies in France for these boats was a specialized anti-ship missile “Exocet” missiles which locked on to the target using inertial and active radar homing and had a range of up to 70 kilometers. 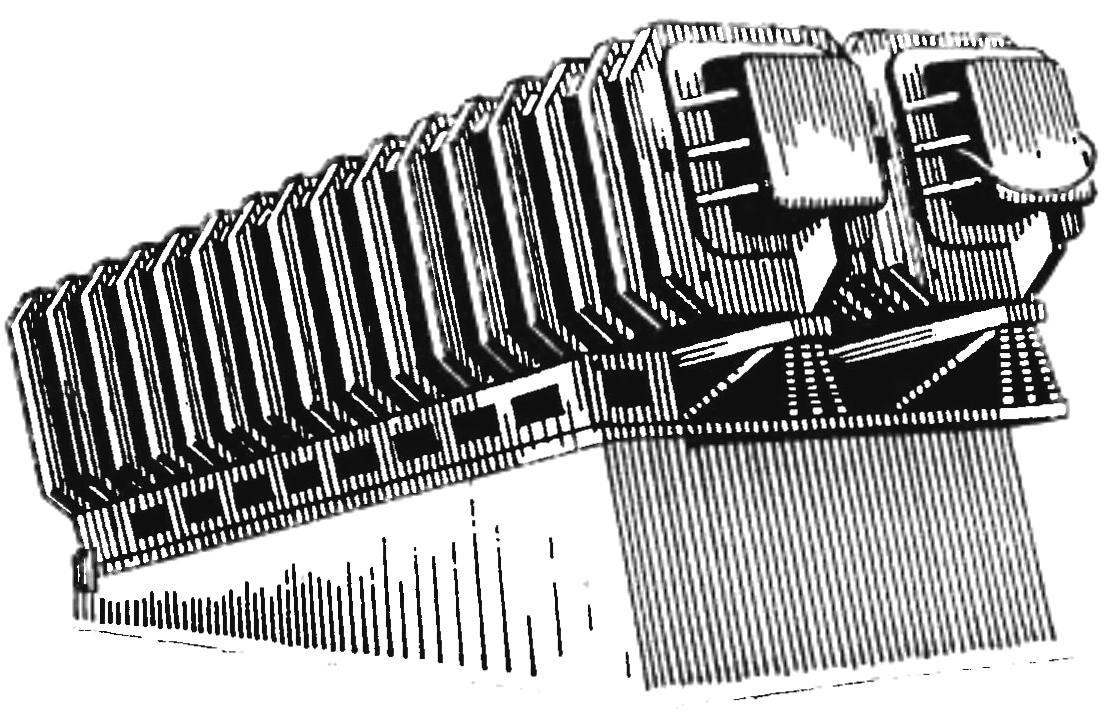 Anti-ship missile “Exocet”
In 1971, 20 missile boats “La Combattante 2”, which later received the designation of “Tiger”, was ordered from France by the German government at the same time the German concern AEG-Telefunken was conducted and their own development of missile boats, which was created by the big boat project 143 “Albatros”, which resembled an enlarged “Tiger”, ten ships of this type joined the fleet in 1976— 1977.
The displacement of German missile boats “Albatross” was 391 tons, the total capacity of the power plant of four diesel engines — 18 000 HP, speed 36 knots. Maximum length of boat — 57,7 m, width 7.6 m average deepening of 2.5 m. Armament consisted of four anti-ship missiles “Exocet”, two 76-mm gun mounts and two torpedo tubes.
We offer modelers to produce a model missile boats “Albatros” in scale 1:50, which can compete in the class EC at a distance of 25 meters.
One of the most difficult and time-consuming elements of the model is the body, so it is advisable to work three-four and make housing the most advanced matrix method.
The first operation for the manufacture of a matrix is the creation of the master model. It can be done from almost any scrap material — monolithic from Linden or birch bar sizes, the foam covered with glass fiber epoxy resin, and paraffin. By the way, the latter method is less time consuming and enables the reuse of the forming material (paraffin) to work.
The work on creation of the paraffin models begins with making templates to do their best with the thin plywood. In the center of each template, cut a hole under the smooth wooden rail, which will allow you to gather all templates into a single “skeleton”.
The latter placed in a kind of box made of boards; the inner surface is insulated by a Mylar film. The use of plastic film is not allowed because of its insufficient heat resistance. Next in the box is filled with paraffin, melted in a water bath; after it has cured, the box is disassembled and is extracted and paraffin blank master model. 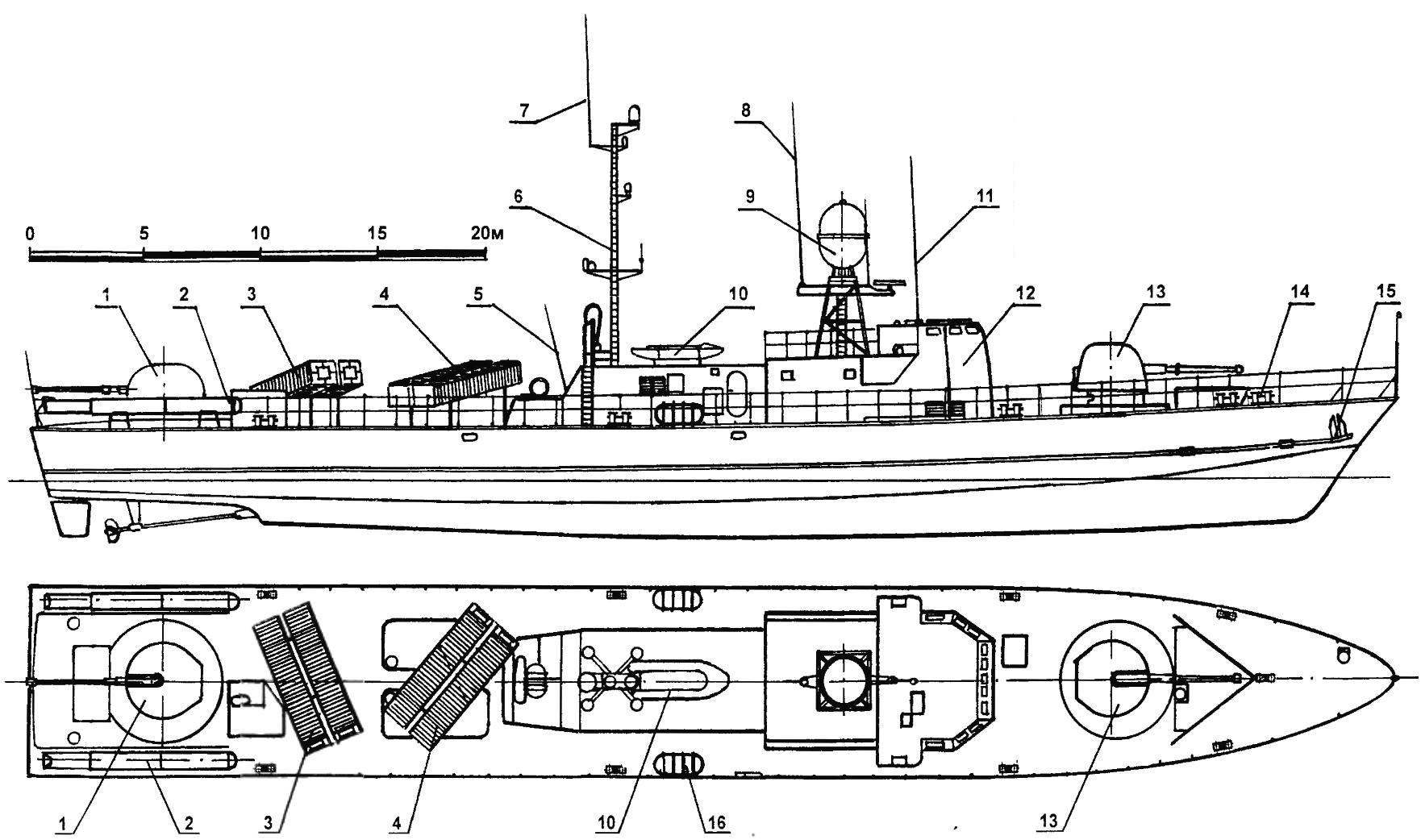 Missile boat “Albatross”:
1 — aft 76 mm gun mount; 2 —torpedo tubes; 3.4 anti — ship missiles “Exocet”; 5,7,8,11 — rod antenna; 6 — mast; 9 — radar antenna: 10 — rescue boat; 12 — cutting; 13 —bow 76-mm gun mount: 14 — mooring cleats; 15 — anchor; 16 — liferaft
Treated with paraffin wax using a knife, scraper, chisel, plane. You can use thermaltak made from shock heated nichrome wire. A good tool is obtained from an electric soldering iron, which instead of standard copper soldering tip uses a homemade necessary for the form.
When processing paraffin blanks are first “exposed” plywood formers, and then processed area between them. Small chips and shells on the disc are eliminated by filling up with heat torch or electric soldering iron. Ready master model raspolirovyvayut and glued on an epoxy binder with two layers of thin fiberglass.
Next, the master model is placed bottom up in a plywood container — configuration in plan should be such that between the container walls and the master model remains a gap of about 10 mm. Latter is filled with any suitable material — such as small stones, coarse sand, etc the space between the master model and the container walls is filled in several stages with the epoxy resins, resulting in proper matrix — just have to melt the wax from it and extract the “skeleton” of the master model.
Before vyklevyvanija shell of the hull of the boat the inner surface of the matrix raspolirovyvayut and covered antiadhesive composition — this is best to use a Teflon autopalyarol.
The moulded shell is made from fiberglass and epoxy glue. Depending on the thickness of the tissue to vyklicky shell will need four to six layers. After curing of the binder are filled in a hull transverse frames of the 8 mm plywood, after which the shell is extracted from the matrix.
The deck is cut from 5mm plywood, cut holes for add-ons, and then pasted the coaming with a height of 20 mm. Fixed deck in the hull after mounting of engine and stern tube shafts and steering gear.
As the power plant uses the electric motor MU-30 of 40 watts, the working voltage is 27 V, current consumption 5 A, the rotational speed 7500 rpm weight 0.6 kg Power motor — battery type 2 NSC-2 a total voltage of 25 V. 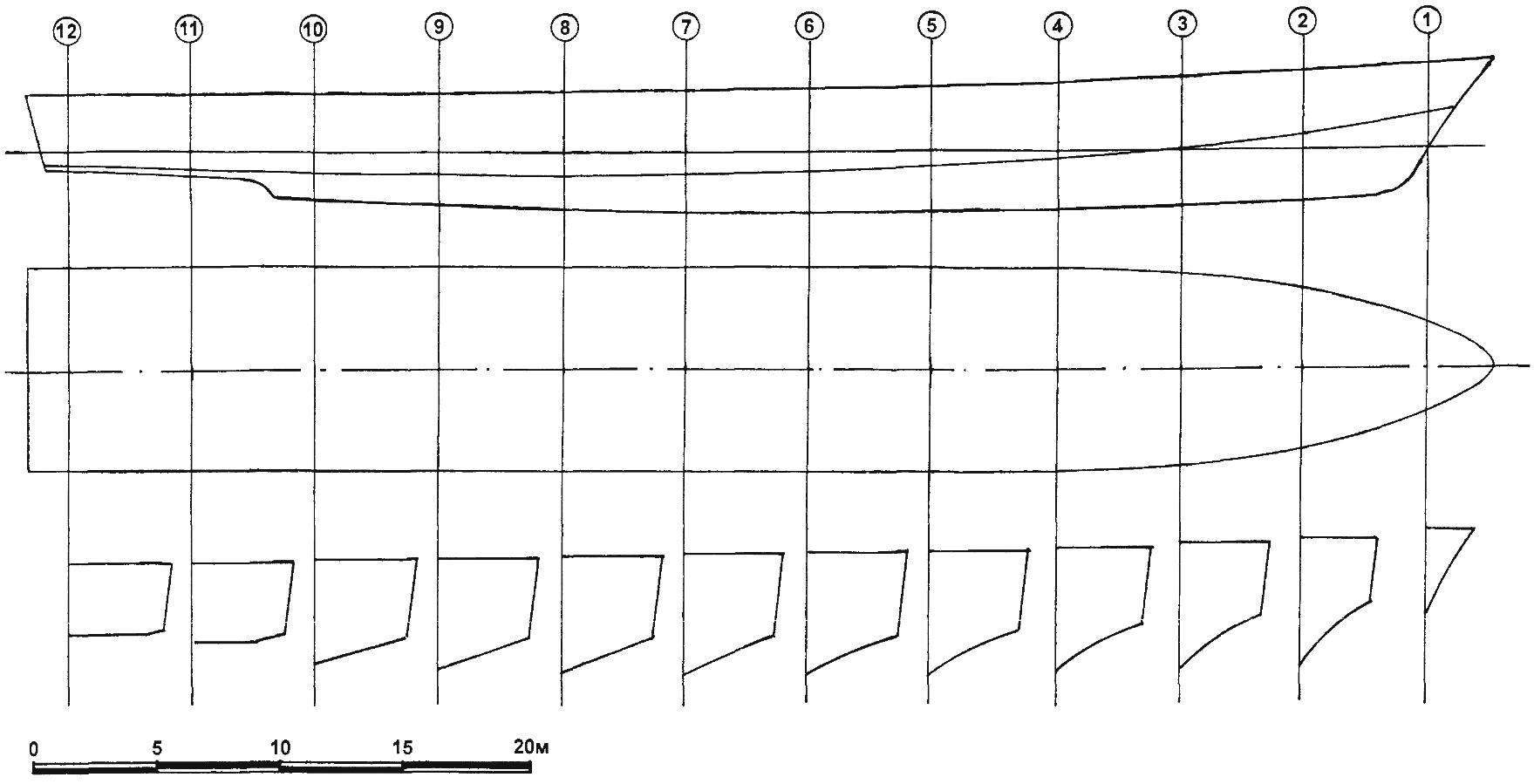 The theoretical drawing of the hull missile boats
To drive screws used self-made gear reducer with a ratio of 0.75, providing rotation of the pair of output shafts in opposite directions with a frequency of 5625 rpm. the Design of this reducer is in sufficient detail described in the article “If the sea trouble…” (“modelist-Konstruktor” No. 4, 2003).
The engine along with gear, fixed on the frame of 10-mm plywood fixed to the housing at an angle of 7.5 degrees to the vertical.
Each of the stern tube shaft diameter 6 mm shaft rotates in a steel tube, which with the two sides glued textolite bushing; in the Assembly of the stern tube is filled with grease (for example, type tsiatim). Propellers with a diameter of 50 mm and pitch of 24 mm are assembled from brass hubs and soldered thereto of the blades; stern tube shaft they are mounted brass nuts fairing.
Stern tube shafts and output shafts of the gearbox are connected by elastic coupling springs made of wire of the type OVS 2 mm in diameter. To prevent slippage of the shafts to couplings, each of the shafts is drilled blind hole with a diameter of 2.1 mm, and the ends of the springs recurved hooks.
To participate in the competition the model must be equipped with time relays, capable of switching used on the model engine, while aging time to 80 seconds.
Technical characteristics of the missile boat “Albatross” (project 143)
Displacement, t……………………………………………………..380
The greatest length, m………………………………………………..57,5
Width, m………………………………………………………………….7,3
The total engine power, HP……………………18 000
Maximum speed, knots………………………………………..38
Weapons………………….4 anti-ship missile
complex “Exocet”, 2 torpedo tubes and 2 76-mm artillery installation
I. TEREKHOV