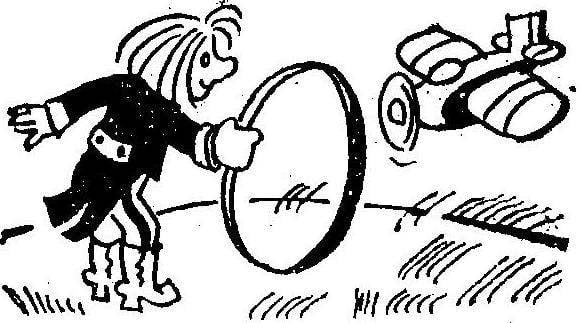 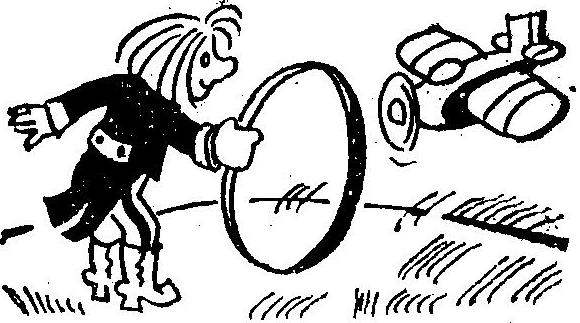 To maximize flight time Svobodnaya model championship class, usually try to use large angles of attack. However, flying often becomes unstable due to the disruption of flow from the wing. To address this shortcoming, Leningrad Antonov an S. Matveev developed and tested in practice a system of slotted wing.
We acquaint readers with the experimental results of S. Matveev and hope that they will help the model aircraft.
The smaller the reduction rate of the model, the longer she stays in the air. This is especially important for free flight models: gliders, rezinomotornaya and timer.
Often the desired mode of flight is performed at high angles of attack of the wing. This regime is characterized by the fact that at angles close to 12-14°, the air stream falls from the top of the wing. The flight becomes unstable, the performance of the model drops off dramatically. At the same time, we know that the angle of attack can be increased to 18-20° without any risk, if you apply the vanes, which prevents disrupting the flow, forcing it to go in the gap between the bearing surfaces.
On the model of the glider (Fig. 1) shows the profile of the wing with a powerful crack the slat. A characteristic feature of it is the nasal slit, tapering gradually along the chord. Characteristics of other rezinomotornaya model (Fig. 4), which uses vanes, conventional for such structures, the championship class: flying weight — 235 g, of which the weight of the rubber motor — 39 wing Area is 15.1 dm2, the area of the stabilizer — 3,87 DM2, propeller with a diameter of 590 mm and 650 mm step — two-bladed, foldable, with wide hub made of steel wire. 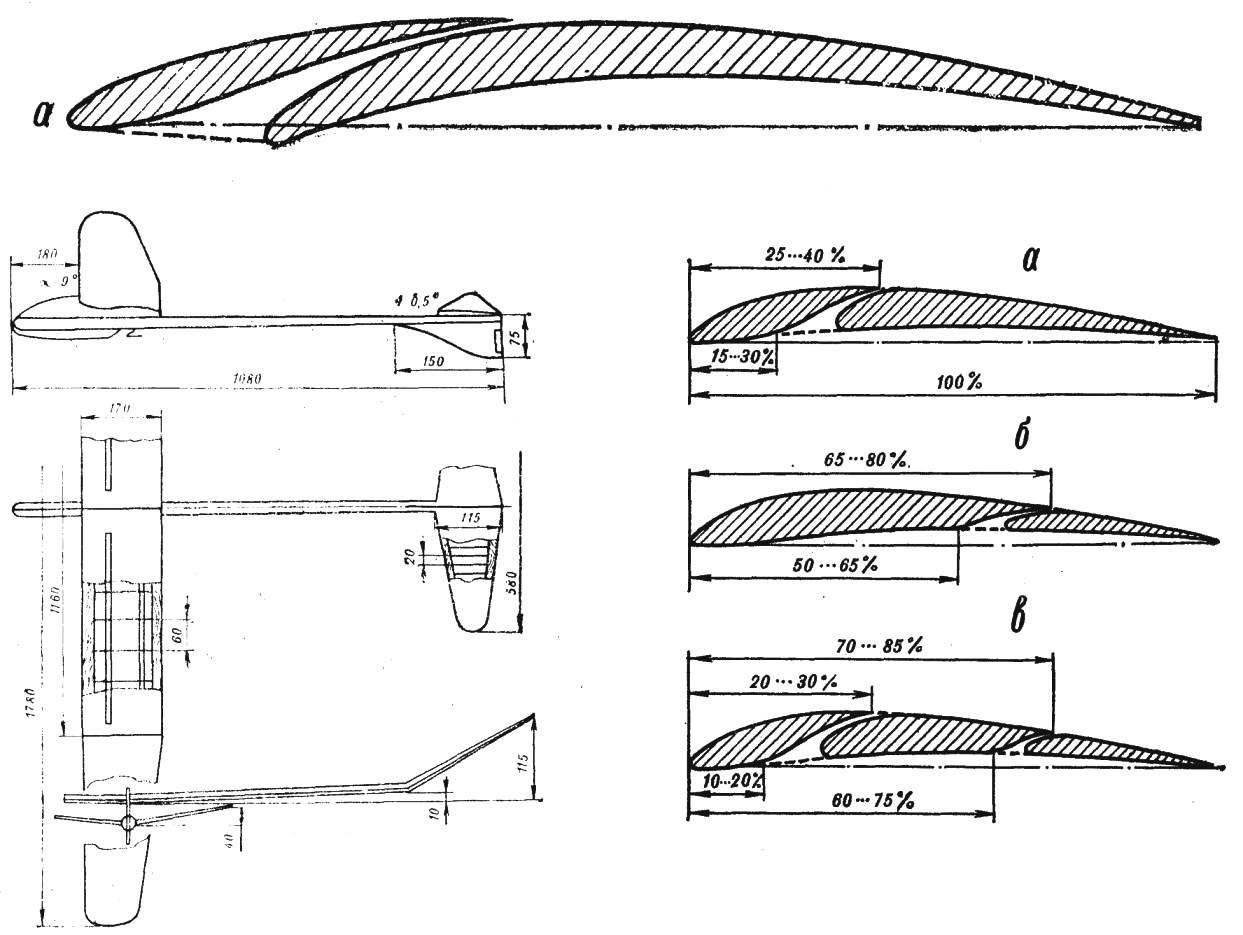 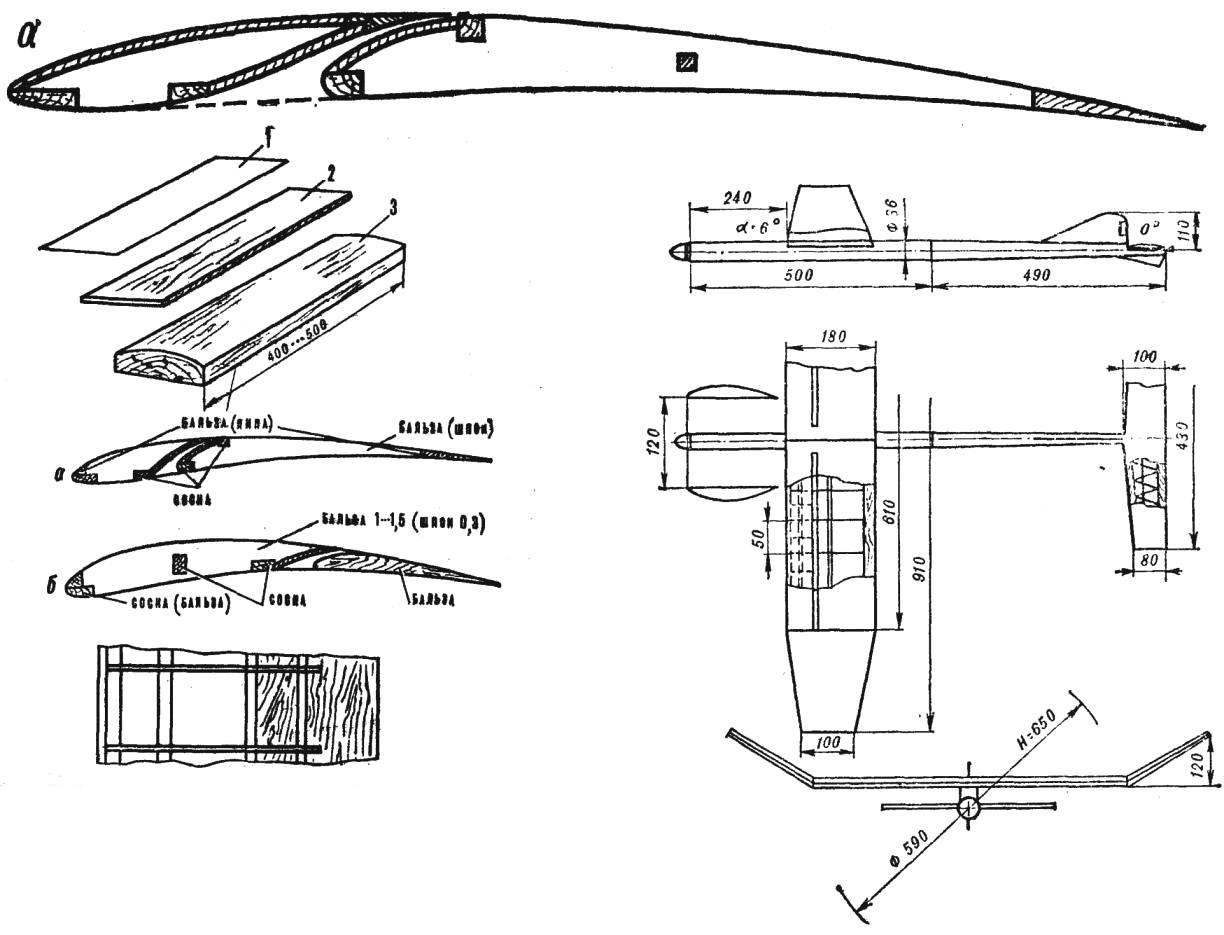 Fig. 3. The technology and design of the slotted wing on the model:
1 card (Whatman); 2 — balsa 1.5—2 mm (Linden veneer 0.3—0.4 mm); 3 — contour of the slot profile (blank basswood or pine); and — wing with the slot in the bow, b — wing, crack in the tail section.
Fig. 4. Rezinomotornaya model with slotted wing:
a – slot wing
The wing has a profile MVA-301 m with the nasal slit (Fig. 4, a). First, the model was adjusted with the gap, papered over, then open. She gained a much greater height than the model in General. However, the design with the nasal slit (slat) requires a more careful adjustment.
After this was built and tested model of similar schemes with a chord of 140 mm and of the wing profile NACA 6509, but with two cracks in the wing. Figure 2 shows the species profiles of slotted wings. This slat, or nasal slit (a) slit flap (b) and dvuhmetrovoe wing (in). Also shows the basic dimensions of the slit position on the wing chord in percent of the chord length. The width of both the front and rear slits have a bottom surface was 4-6 times more than the upper. For all tested systems, the split wing was better than the system with the nasal slit.
The technology of manufacturing of slotted wing for free flight models has its specificity (Fig. 3). First, prepare two blanks (length 400-500 mm) with the profile of the front and rear parts of the nasal fissure or the rear slit front slit flap” Prepare a stick of balsa wood with a thickness of 1.5 mm or veneer of lime 0,5 mm. Thoroughly soak the blank in hot water, put it on a CD, and the top cover with sheet of drawing paper. Then tightly tape all details of rubber thread 1X1 mm and wait until the plate is dry, then cut it into pieces and insert between the ribs. The distance between them should be not less than 50 mm. the Surface of the record and profession-oriented the slit is preferably polished. Rib wing from 1.5 mm balsa, birch or lime veneer 0.5 mm. Shaped flap of balsa. Is fine and dry lime. The ribs connect with each other the front and rear edges, and formed a “skeleton” obtyanite tissue paper. In the end areas of the flap will stick on the bamboo pins and glue to extreme ribs of the Central straight portion of the wing. All models of gliders and rezinomotornaya design is best made of balsa, but they can be built from conventional materials.
S. MATVEEV, St. Petersburg