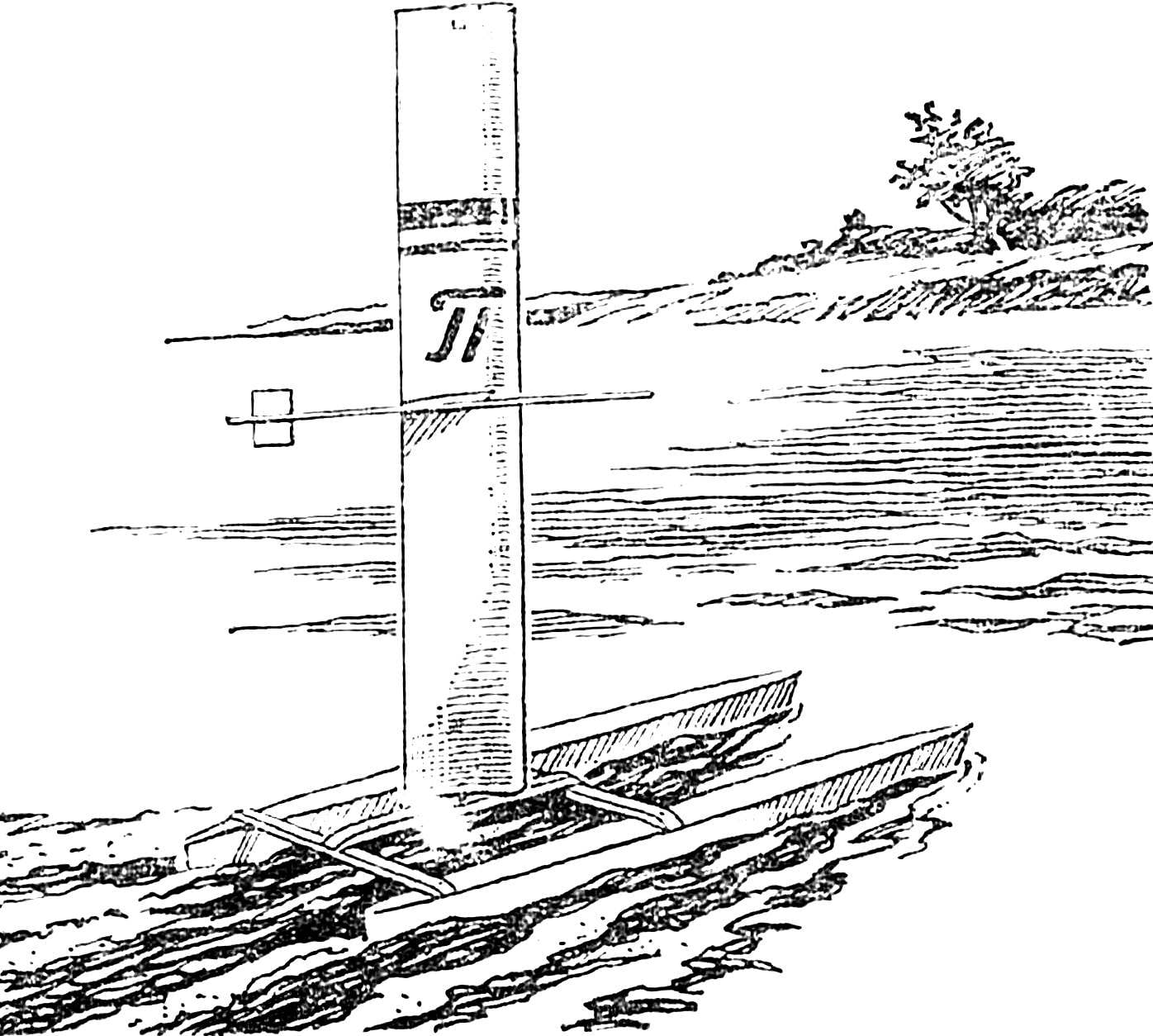 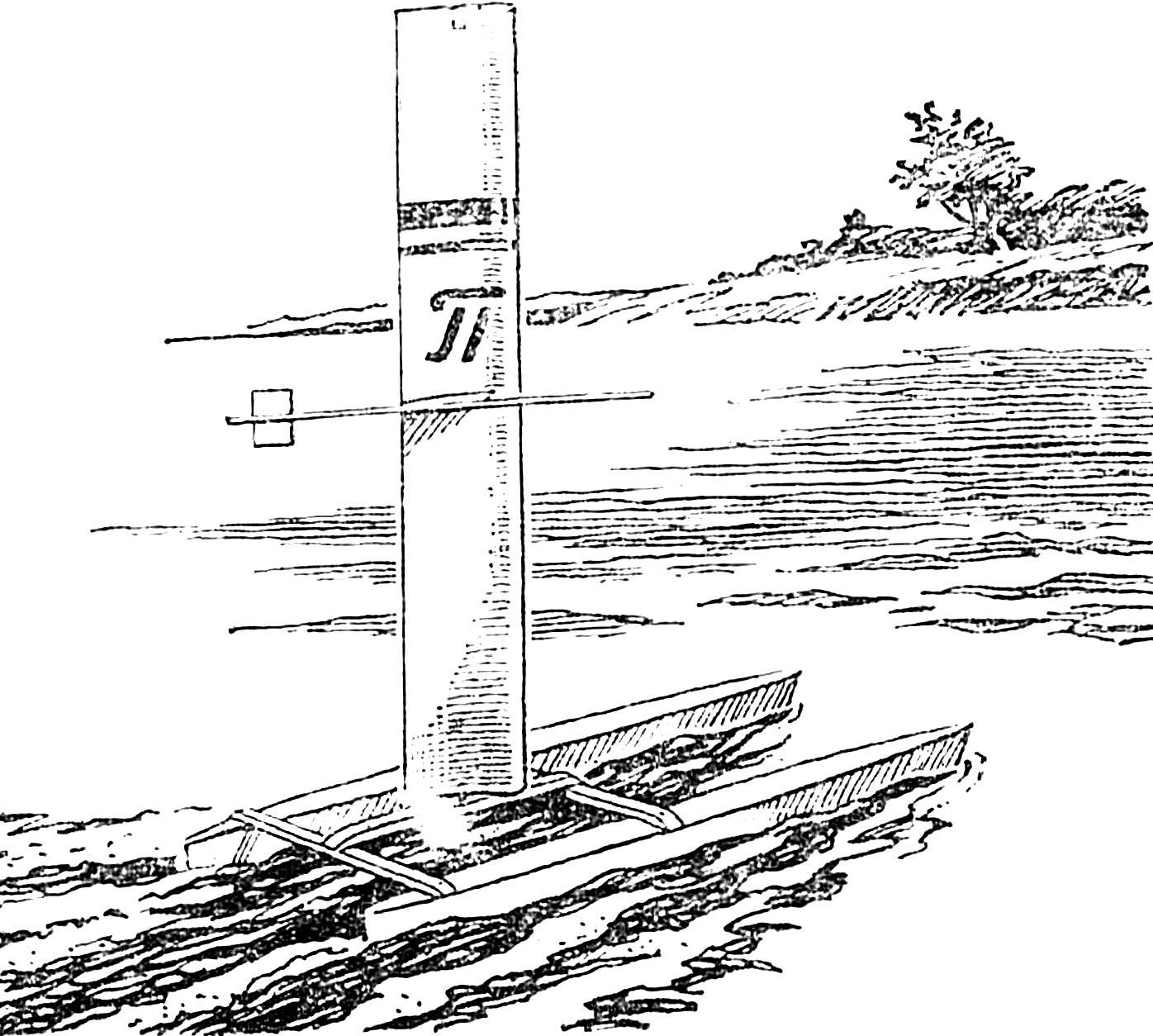 When the boy, fascinated by the construction of models racing yachts for the first time the opportunity to try their hand at the most important stage in the competition? Of course, in the spring, at the start of the school Championships. But if a novice athlete has never appeared on the waters in terms of the competition, if he has no more experience of running sailing models, and knowledge on hydro – and aerodynamics and meteorology small — model traditional scheme it is doomed to failure.
There is, however, a class can significantly increase the chances of the novice athlete to successful performance even in senior competitions. This is the class P. there is a wide perspective for the design of optimal search schemes, the ability to move away from traditional solutions and schemes. One such area is the creation of self-governing a catamaran. They are so easy to debug, reliable behavior on the sports of the waters that they can confidently recommend, even for beginners. Today we publish a description of just that microage, equipped with original self-adjusting sail-wing. This model is the championship of Leningrad showed the second result.
Structurally, the model is so simple that it can be built by any student for literally a dozen hours. It should be noted that this not only makes the boat attractive for beginners, but also allows a few classes to organize mass events, up to the district. 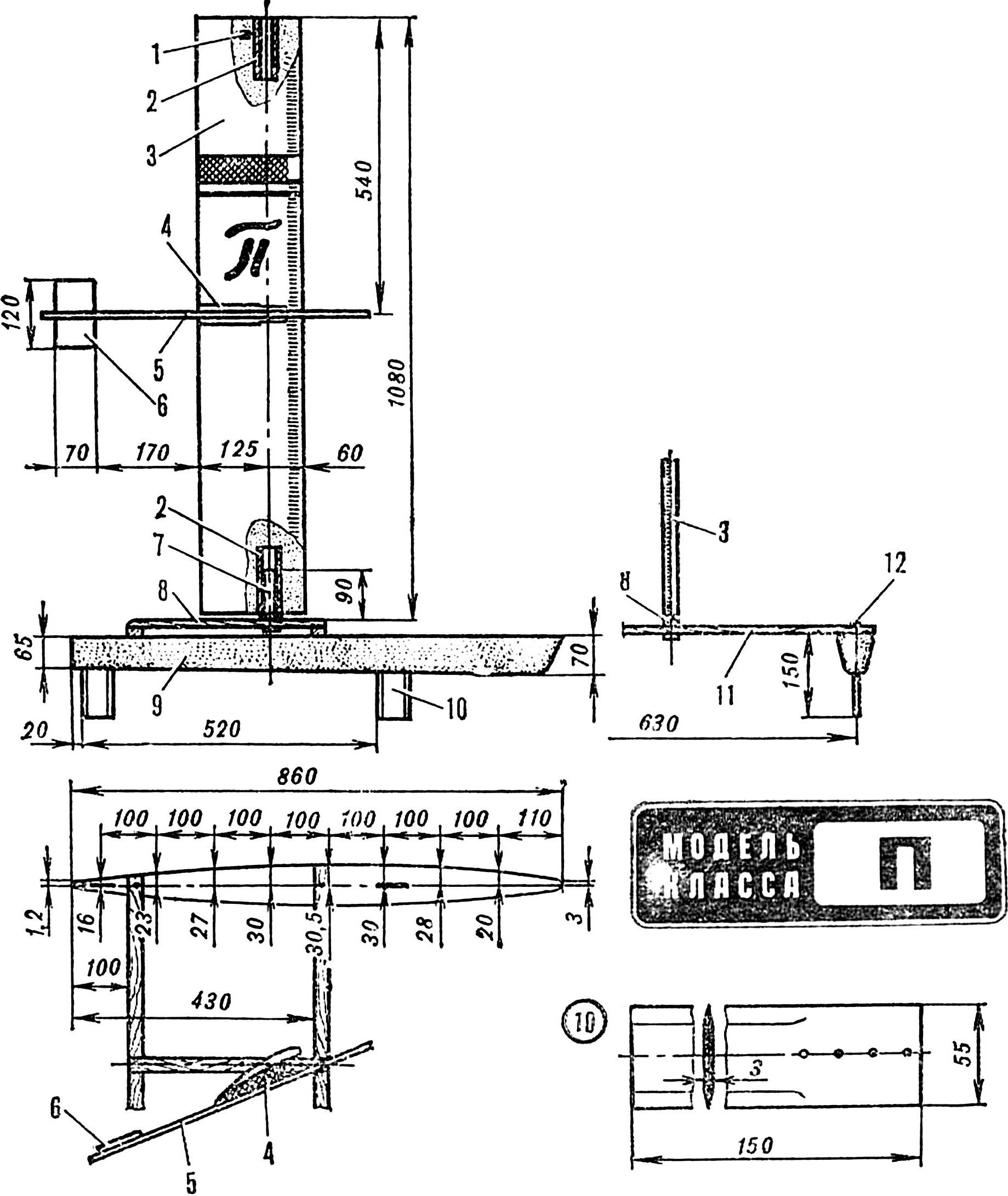 Self-governing model of the yacht catamaran class P:
1 socket to install the rail stabilizer on the course before the wind, 2 — the tube-bearing, 3 — wing-sail 4 — boss mounting rail, 5 rail stabilizer, 6 — stabilizer, 7 — axis installation wing (steel rod Ø 8 mm with M6 thread on one end), 8 — longitudinal beam with five holes under the axle, 9 — housing, 10 — centerboard, 11 rail cross connection, 12 — point mounting cross ties on the case (the screw).
Hull-catamaran-cut foam grades SS-1 or PVC. The billet is cut from a block with a handsaw and a bar represents the parallelepiped with sides 5 mm large size of the theoretical lines. Further work with the foam is conducted with the help of Shoe knives, and common kitchen graters for vegetables.
Machining starts with the layout of the contours of the deck. First, on a sheet of thick paper or plywood on the drawing is the outline of Poloshirt of the housing when viewed from above. Then, attaching to the longitudinal axis of the folded sheet of tracing paper using a flexible Reiki patterns discourage edge of the deck. Now, cut along this line, tracing paper, straighten the resulting template and transfer the outline to the foam.
This marking block is trimmed exactly vertically flipped “bottom” up, using a makeshift Rasmus on the “bottom” of the line, separated from the rails by 5-8 mm. Sostrogat the foam so that the edge of the deck and a new layout connected straight form the sides, get a trapezoidal cross-section blocks. It remains to round transition “sides” to a flat “bottom” using cardboard templates having the shape of a quarter circle. Finally the foam billet is brought sandpaper medium grain. Sharp edges should remain only at the intersection of the plane of the deck boards.
The finished foam body coated with epoxy or epoxy putty. These operations, as further grinding, it is better to trust the head of the circle. The putty process is repeated to produce a flat smooth surface. 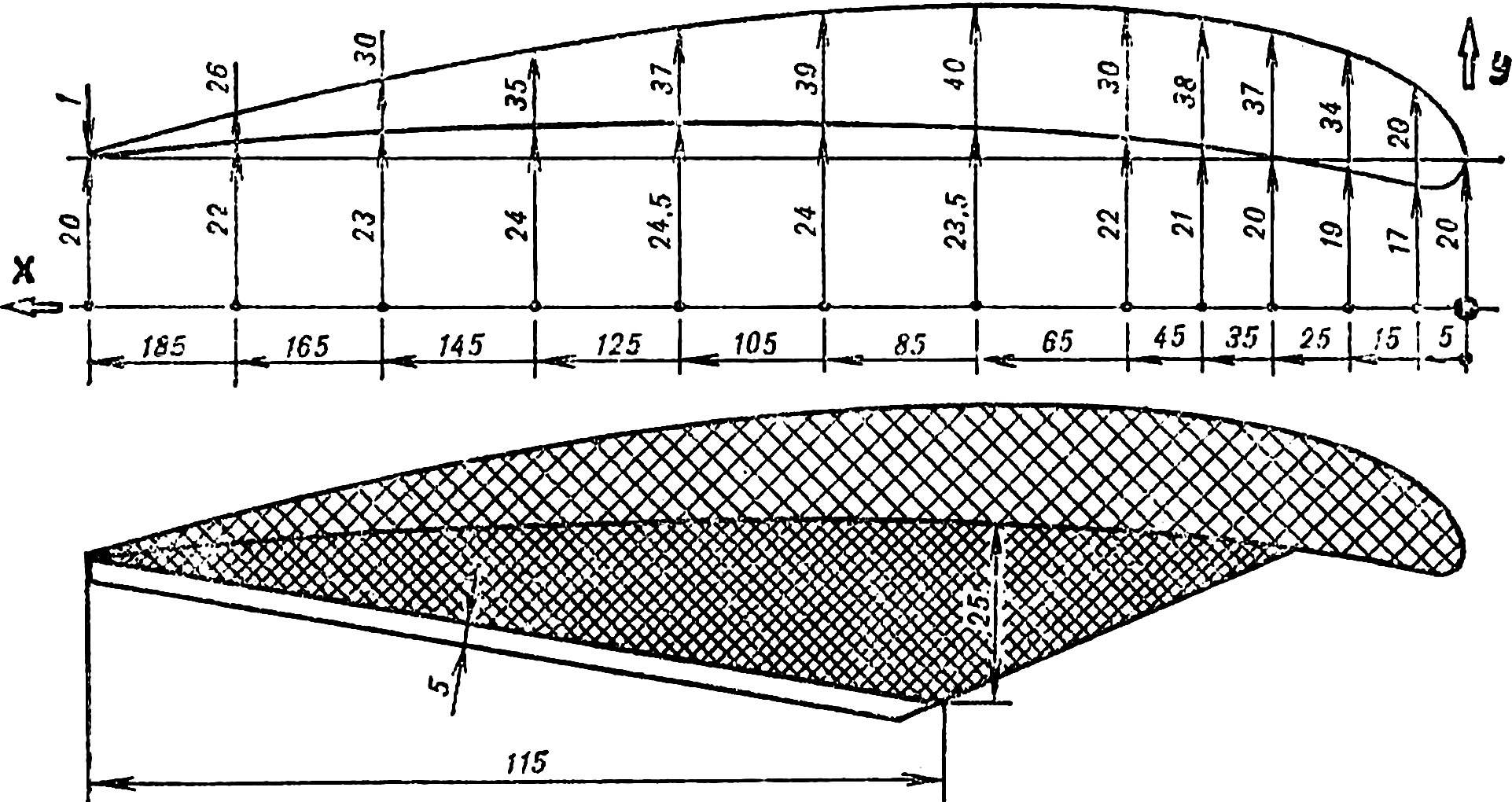 The scheme to build the profile of the wing-sail. Below shows the layout of the boss stabilizatory Reiki.
Now it is time for installation of Vertov. To do this on a diametral plane of the hull cut a slit slightly wider and longer section of Vertov. These grooves are filled with epoxy putty or resin mix with any filler, and they put in a plate ready Vertov, pre-lubricated with vaseline or grease. While the epoxy binder is not hardened in the grip set pair of metal perfectly straight squares and clamped between Shorty. Thus it is possible to achieve a perfect parallelism of the plates, determining the straightness of the stroke of the future yacht. The case is reinforced by the relative angles of the clay, which for reliability and is laid in the angles between the protruding portions of Vertov and deck.
The excess of the hardened putty is cut, the body zashlifovyvayutsya on sites shvertovyh wells. Themselves Shorty should move in the grooves smoothly, without distortions. If the plates in the control will be non-parallel or will not be located exactly in the median plane model of the body, the installation operation of Vertov again, prying off the hardened putty.
Sortovye plate cut out of Plexiglas or textolite with a thickness of about 3 mm, the front and rear edges they sharpen, sharp edges dull skin.
The two buildings connect pine rails (cross bracing) with cross-section 12H25 mm. During Assembly special attention should be paid to the control of the vertical Diametric planes of the buildings and the lack of their mutual distortions. Allowed misalignment buildings not more than 3 mm over the whole length thereof. Slats are fixed on epoxy resin, in addition to their reinforcing in the foam, long screws, which, after a generous coating them with resin is pressed into the foam through drilled in the cross ties of the hole.
The design of wing sails can be very different. In our model of his plane cut out of foam, at the ends of the glued brass tube Ø 12X2 mm, which are the hinges of the hinge wing on the model. Rack stabilizer bracket is attracted to the boss, glued to the wing with its bottom side, a rubber thread. When you run enough to properly direct a model for the desired course by turning the sail with the concave side to the wind. The rest of the adjustment will fulfill the stabilizer, the wing deploys at the optimum angle to the direction of the apparent wind.
Before starting it is useful to check the depth of the issue of the front and rear Vertov. Stern recessed to deck level, the installation depth of the nasal depends on the course of the yacht relative to the wind. It is steeper than the deeper one descends into the front plate.
On the course the wind the wing is changing. Rack of the stabilizer is removed from the lugs and transferred to the top of the sail. There it is fixed in a specially made for this rectangular hole.

Self-resetting system Parus-stabilizer at different wind directions relative the course of the model.
It should be noted that the method of making — not only for such models. More experienced modelers-students can offer Vileika hollow fibreglass with a bead thickness of about 0.5—0.6 mm. Valaku convenient to carry on a foam block covered with a greasy paste. After curing epoxy resin disc is removed, valaku inside vyskazyvat and it set the elements of shvertovyh wells. The deck using “RUB bars” glued to the sides. Cross connection in such performance buildings privorovyvat strips of fiberglass.
The scheme is self-managed yachts can be used in the class H. In this case, all the dimensions increase two times, limiting wing area of 0.75 m2.
V. ALEKSEEV, Leningrad