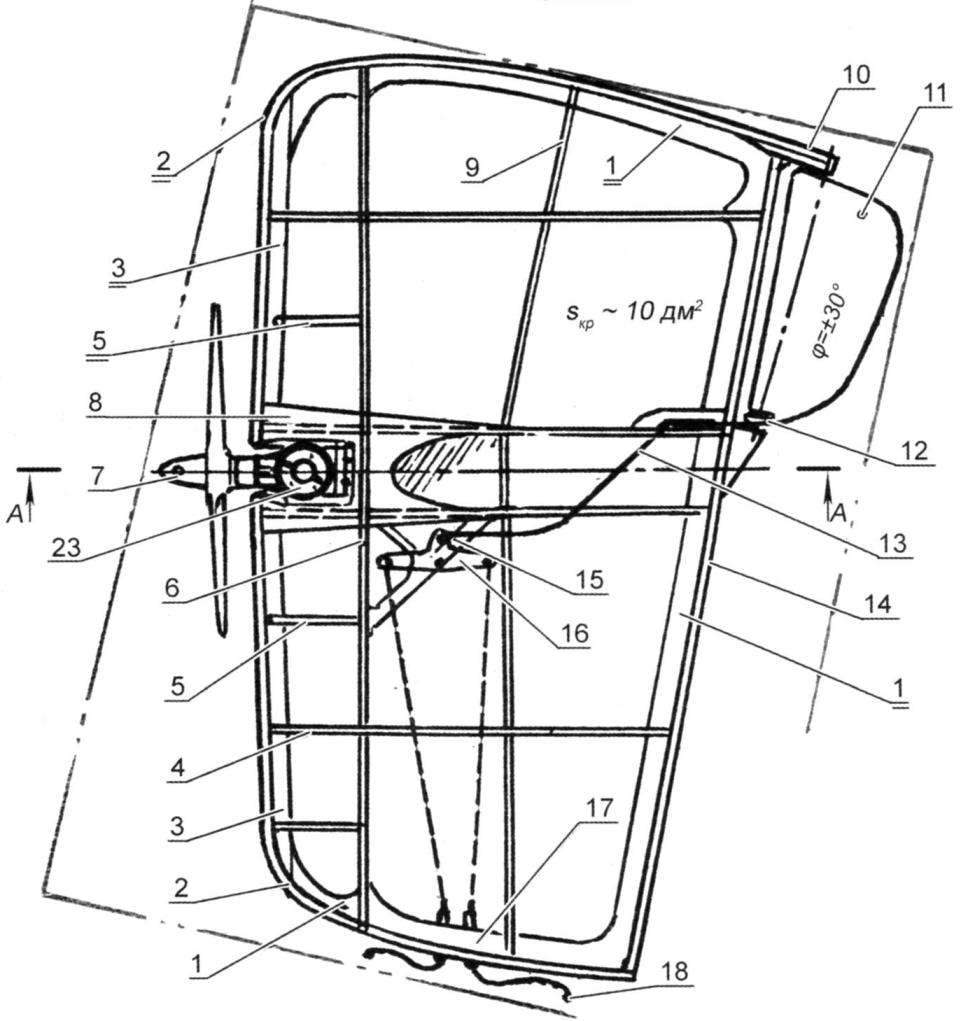 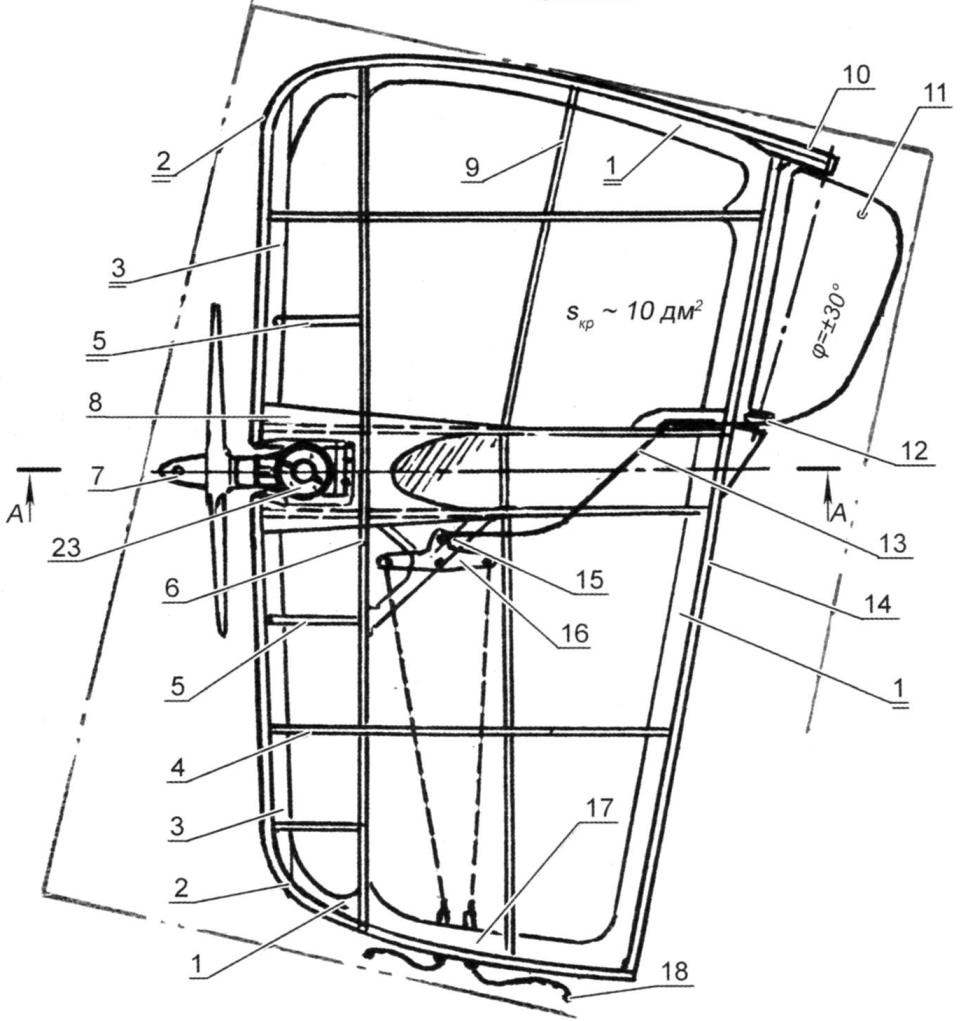 Modern models of air fight as a championship class and “Junior” are in many respects similar in construction and, accordingly, on the concept. They completely satisfy the “fighters” requirements and only differ in the manufacturing technology.

However, despite the perfect scheme, “Junior” subclass sometimes appear unusual decision, the purpose of which, as a rule, are secondary issues. And we offer our “fighters” case: the main goal of our experiments was the creation of ultra-compact models of low mass, designed for engines of limited power. It was assumed that such models will be able to compete in the competitions mid-tier “bouzouki”, equipped with much more powerful (“professional”) engines with comparable maneuverability and speed, however, reduced due to the small mass of medium level of the tension cord. It appears that the experience of working with similar unconventional models and from the individual stages of work results and insights can enrich the theoretical and practical knowledge modelers. In addition, familiarity with the design and technological discoveries and errors generated by creating ultra-compact “bizovac”, will also help in the design models of other classes and types.

First of all, about the tasks that were set in the design of innovative models. As mentioned above, in the first place was required to significantly reduce the weight and wing area that allowed even taking into account the limited capacity of the plant to achieve a high specific speed. It is important to preserve such properties “bizovac”, as their reliability and ease of starting of the engines, and the reliability of their behavior under any atmospheric conditions at any point of the flight hemisphere. The latter requirements are particularly important in the calculation of the operation by pupils not having sufficient experience of piloting cord models.
Good piloting on takeoff “bouzouki” with a limited wingspan is attainable only with maximum compensation of reactive torque from the rotation of the propeller, otherwise, at low forward speed the model vigorously raises the outer wing goes in a circle with the loss of tension cord. To offer readers models this problem is solved by deepening the engine to the wing. The air screw is approaching the front edge of the wing and the flow, screw propeller, immediately SpryAssets wing surface. Thus kompensiruet a large part of the reactive moment. In favor of the improvement of the tension cord as on the rise, and in the mode of driving, there is a difference in scale polycrylic and handlebar stem height, running on models of the scheme “flying wing” functions of the flaps on the outside from the axis of the engine. When the deviation of the rudder there are two side, useful for data compact models effect: decreases the lifting force on the outer wing (“bouzouki” trying to tilt on the outer wing, trying to leave the circle). This also increases the aerodynamic drag of the same wing. As a result, the model may run out of the circle, but in the perpendicular plane. However, the smooth wing shapes both work equally effectively, due to the equality of their areas. 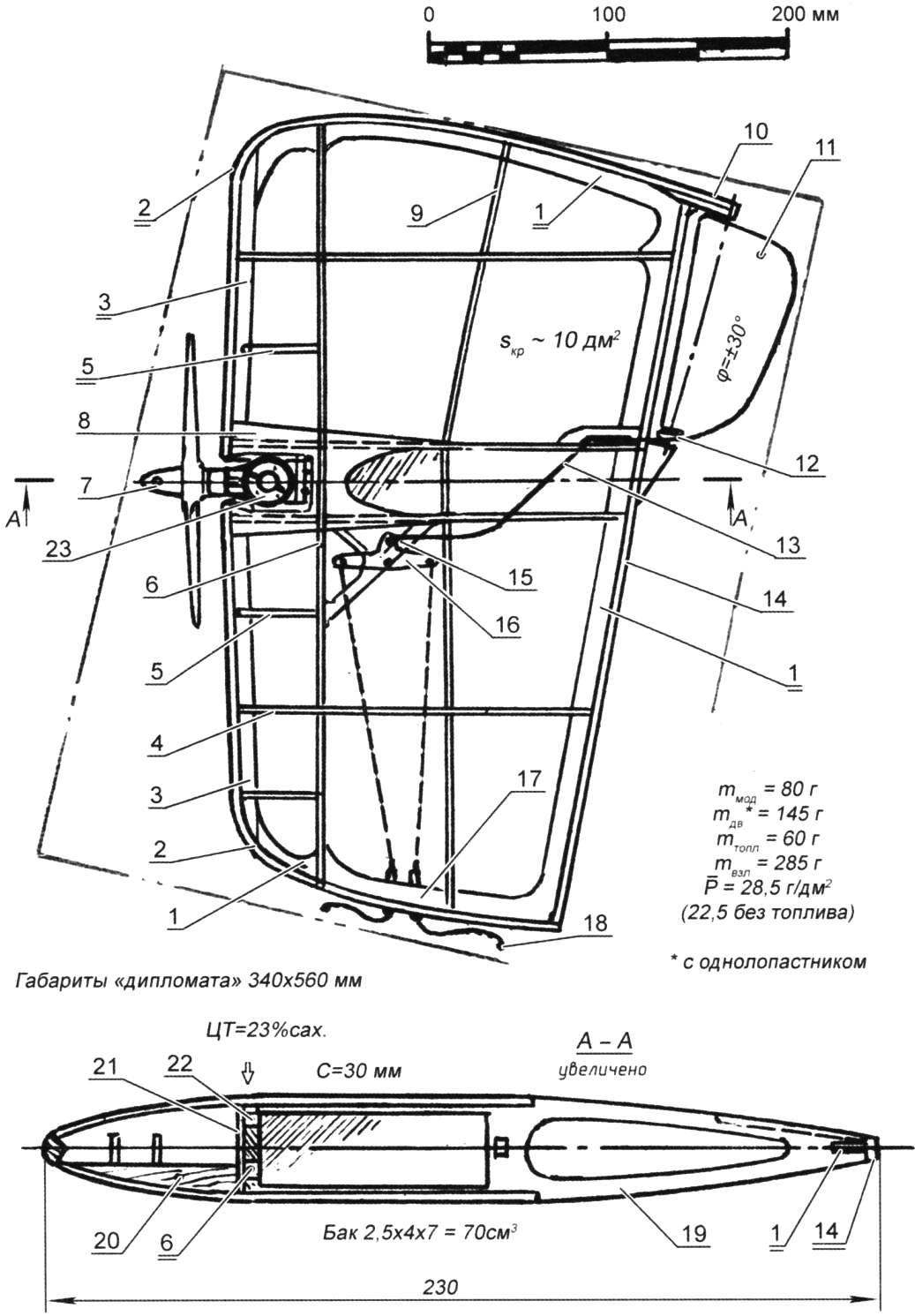 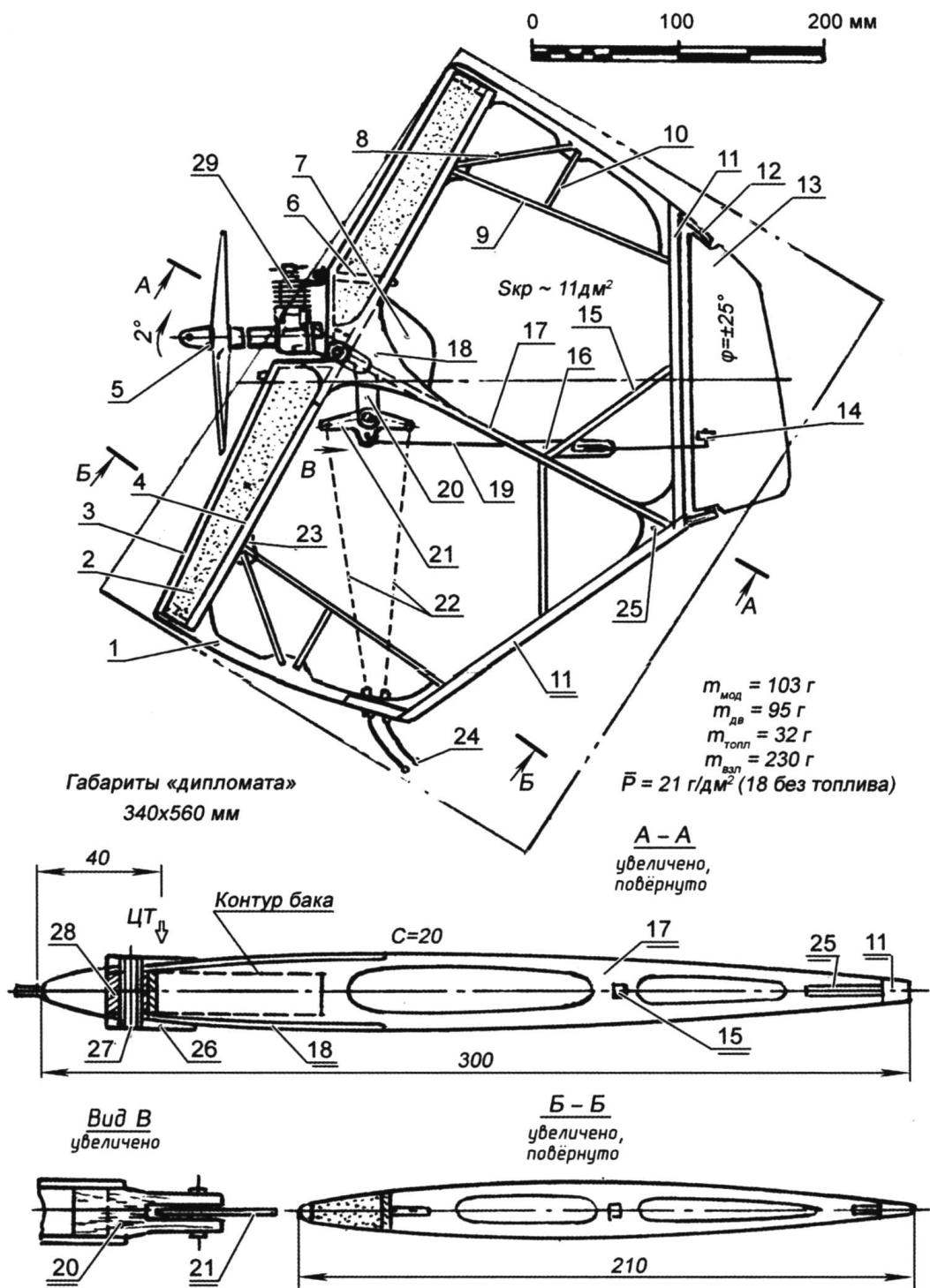 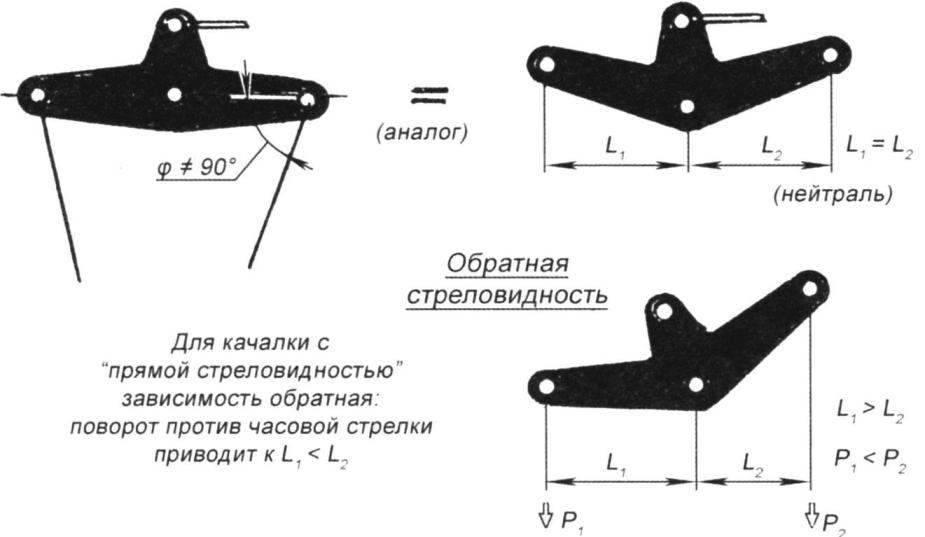 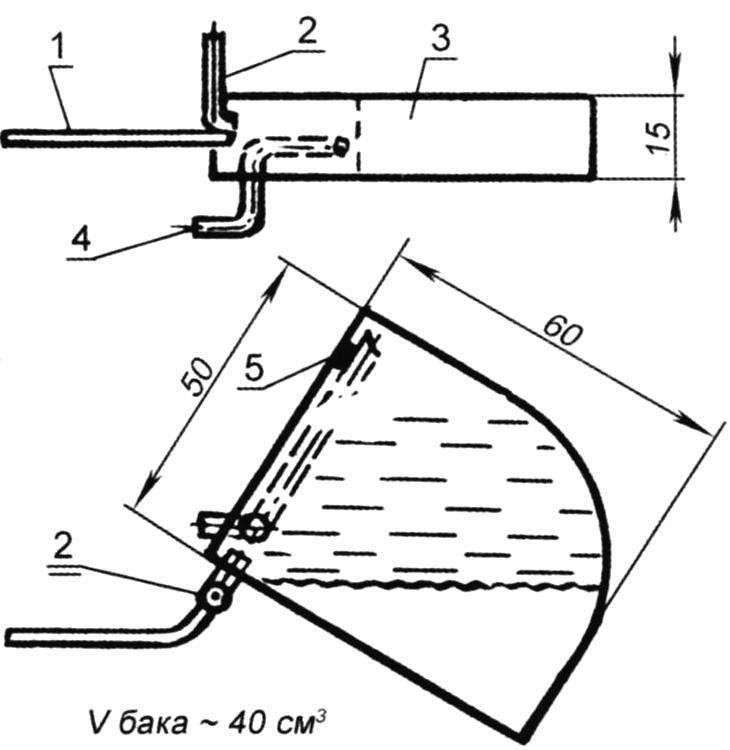 Fuel tank:
1 -tube drainage or boost (copper Ø2×0,5 mm); 2 – tube for filling the tank (copper Ø3×0,7 mm; after refueling to silence); 3 – body of the tank (tinned plate 0.3 mm thick); 4 – supply pipe of the engine (copper Ø3×0,7 mm); 5 – additional attachment point for the feed pipe on the tank wall. When powered by a fuel pressure bleed from the crankcase volume through the nozzle-valve, preferably at the ends of all tubes to napati rings of copper wire Ø0,4 – 0.4 mm, forming a sort of collar fittings 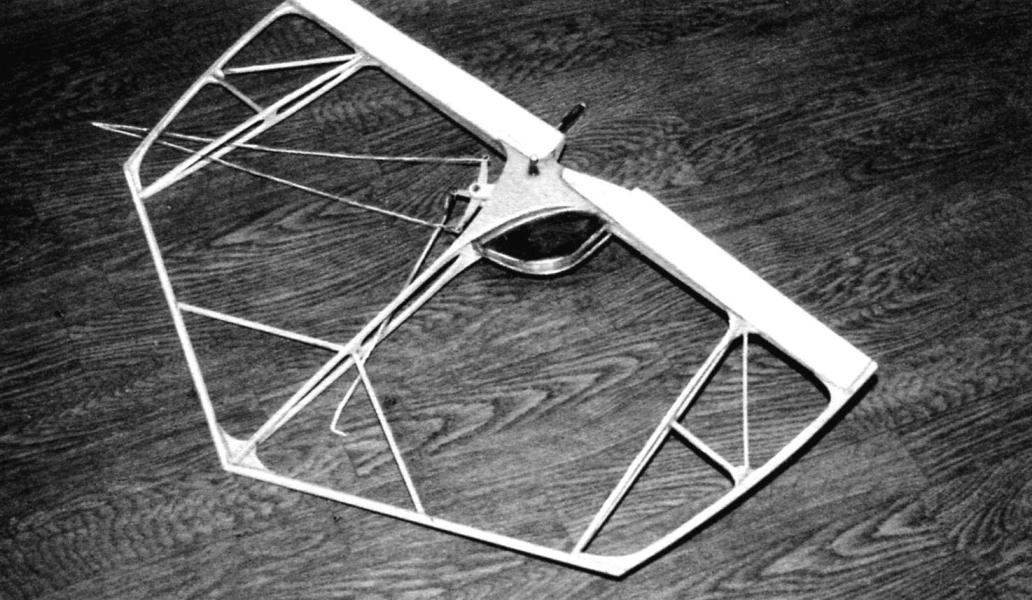 The frame of the second version of the model
When it became clear the reasons for the failure of the first compact “bouzouki”, was created the second “diplomata” model, but calculated under the engine MK-17. For the time required to analyze the kinematics of the control system, there are new ideas that were embodied in the new design, created specifically for the competition.
In addition to the enhanced speed and agility, the second version of “bouzouki” also had to ensure very high reliability take-off without desire care in a circle and to further increase the probability of capture and cut the ribbon model of the opponent. The latter managed to achieve a sharp “skew” the wing, resulting in the best place for the stretch cord is the redistribution of load-bearing space between the left and right polycrylene (relative to the axis passing through the shaft of the propeller). And the cut tape is now carried out not only in case of contact with rotating propeller, but in the case of seizure of the beveled leading edge of the left wing. Tape, leaning over the edge, was moved to the middle “bouzouki” and there were cut the screw or lunging, hitting on the drainage tube or the engine mount. Note that the proposed solution meets the rules prohibiting to have a special device to cut the tape: in our case they are not, and breakage due to contact with the motor mount is quite likely and the usual technique with a certain manner of operating the pilot with Konami after the bend of the strip through the front edge. We only increased the likelihood of such a cut-lead, bringing the attacking width of the gripping zone are almost up to 300 mm (with screw diameter).
In the last performance of “bouzouki” has become even easier and, like the first, is laid in “the diplomat”, however, with the removed engine. Flight tests have yielded good results in all modes and under all atmospheric conditions. Of course, with a reliable working of the “heart” of the model engine.
V. TIKHOMIROV, master of sports, head of airmodelling mug