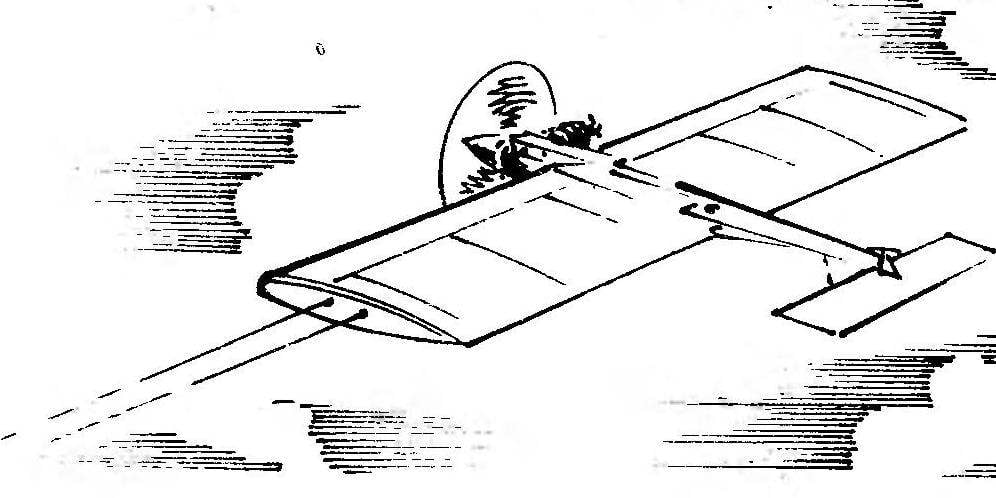 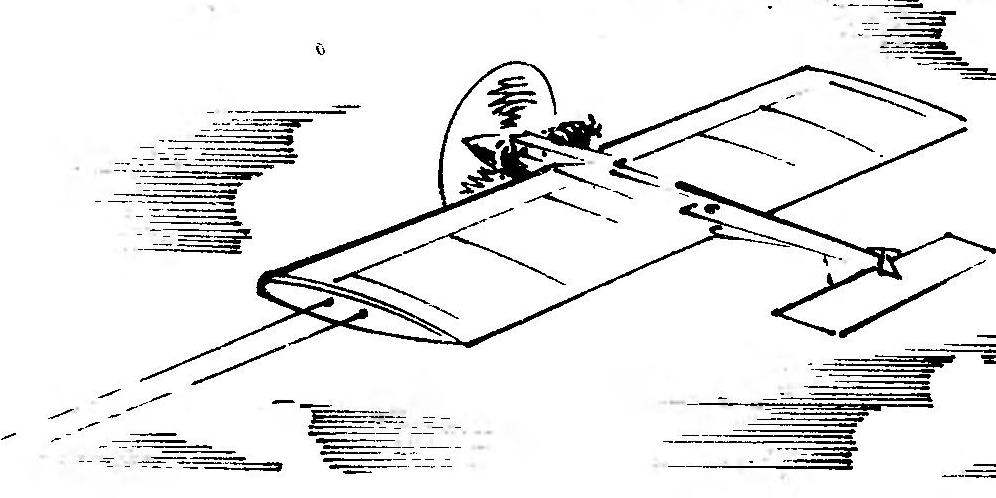 Developed and comprehensively tested in our circle, a new model of a subclass of 1.5 cm3 was very successful. For it is characteristic of a good combination of flight stability and high controllability, and wide adjustment of these parameters. The model has become simply indispensable for us, as it successfully functions as a flying trainer beginner certovica, well suited for training of more experienced and fully meets the requirements of boys-sportsmen even in senior competitions. Do note that bouzouki has very good strength characteristics, and in case of serious accidents, the subsequent repair is not a problem. In addition, when the semi-manufacture of such devices in terms of mug is that new development quite technical.

Bouzouki, which the club eventually was awarded the title “Junior”, has a standard schematic — flying wing made with a small Elevator. The latter by means of a stationary element, which some have called the “stabilizer”, is hung on the beam-“the clothespin”, which, in turn, one screw is mounted on the Central rib of the wing. Last meghrashen the articulation is made so that its ‘ Assembly or disassembly takes a couple of minutes. It may be useful at competitions and in training, when the need arises to replace the thin-skinned tail.
The wing, though made in a common scheme, penola-BIK, has a number of features. Experience in the circle have proven that the model variant with solid foam forehead profile is difficult to reproduce by the hands of the boys. So we went over to the Assembly of the forehead of two identical foam panels, between which are glued the foam also innerware and pine front edge. Despite the extra gluing operation, a new version penelopina advantageous as the mass and manufacturability. The fact that the panels are much easier to cut termolabil with the required accuracy of the profile cross-section, and after gluing the forehead does not need to coprophiliac. For the boys also a much easier installation of the plate monolinuron than in the classic version with a frame with two separate shelves. In our design, the spar presents pine rail section 2×45 mm with cut-out Windows of relief in the end zones. In extreme cases this element can be made of two-millimeter plywood. But then you have to be very careful as to the markup, and the implementation of the Windows — otherwise, spar will be peretyagina, and in the other case, is too weak. In any embodiment, the wafer Central part of the wing is duplicated the same longitudinal trim “scope” in two bays between the ribs. This increase is necessary, since the main spar is notched during installation.
The design of the Central rib is clear from the drawings, and intermediate the same and can be made from basswood ZMM thick, two-millimeter plywood (construction up to 3 mm thick) or balsa 4-5 mm thick depending on the material and its strength, these parts are facilitated. It should be noted that in the front of the ribs should remain two shank included in the Assembly in the corresponding notches in monolinuron. Such a scheme leads to a slight weakening of the spar. However, its height is so great that the cuts leave the overall strength of the wing in a quite acceptable bounds. End rib fully comply with the type of intermediate, differing from them only a blank cover with sheet wood or plywood on the external side of the wing. The rear edge that do not have incisions or cuts, the Assembly is inserted in the slots of the shanks of all the ribs. 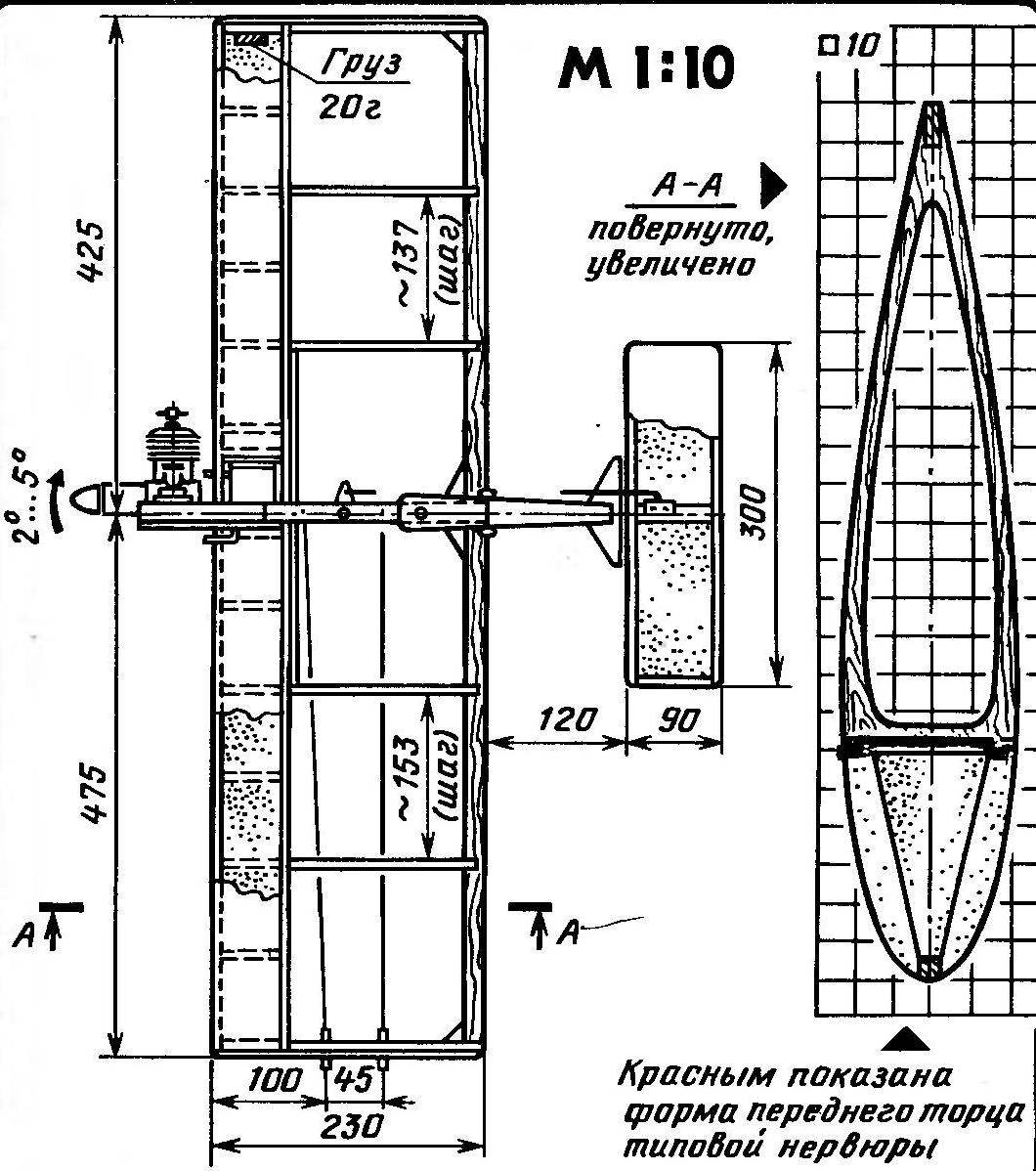 Fig. 1. The General scheme of the cord up under the internal-combustion engine working volume of 1.5 cm3. 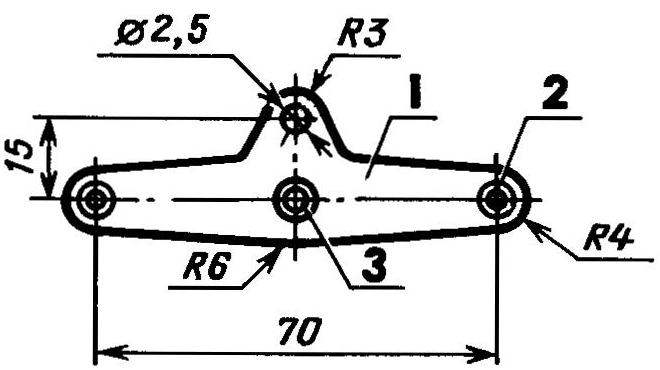 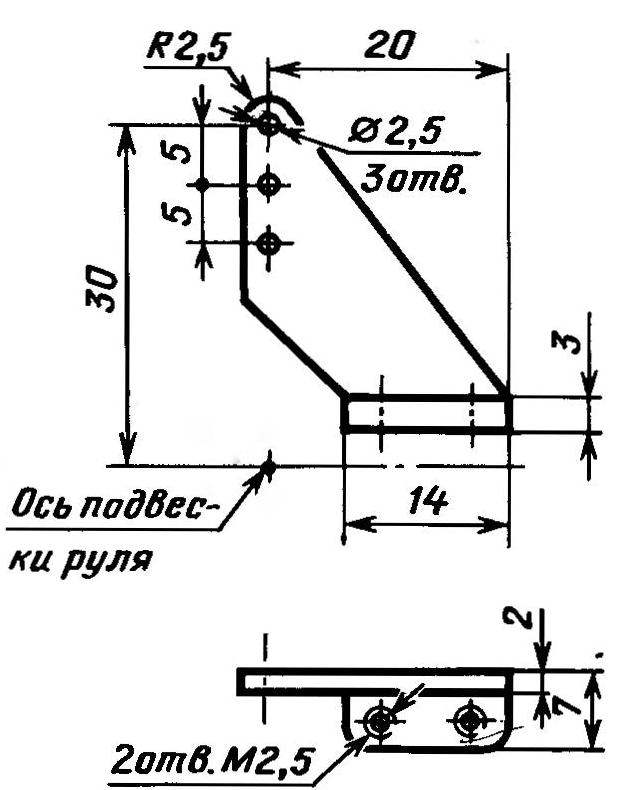 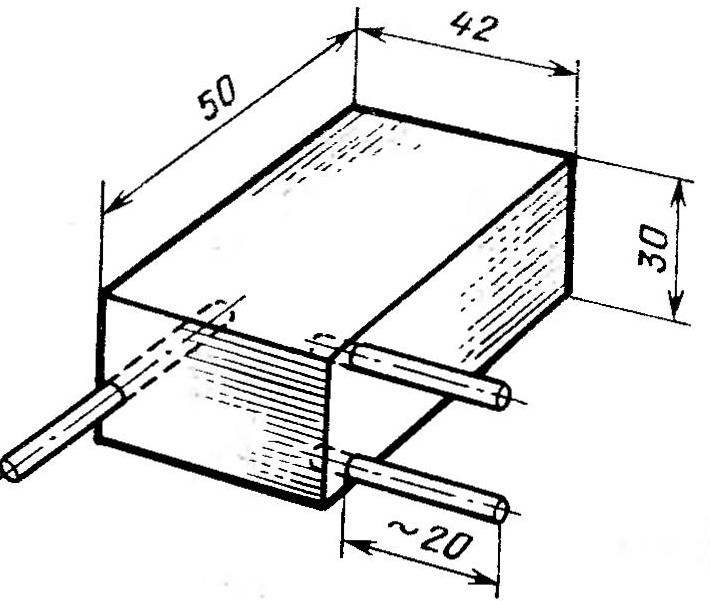 Fig. 6. The Elevator:
1 — edge (pine, cross-section of 4×4 mm), 2 — foam filler, 3 insert, 4 — shell, 5 — trailing edge (pine, section 1,5×4 mm), 6 — ending (pine, section 2,5×4 mm). The rudder is hung on thread or metal hinges-hinges standard design.
Prior to installation of the prepared wing elements into a single unit, it is desirable to have control glueless Assembly. It would allow more time to Refine the connectivity of parts and to avoid unnecessary cutting additional joints in the finished design. Especially pay attention to areas of the motor and installation of the tank (at this stage he should already be ready). Keep in mind that nodes such as prefabricated panoramic, all Central rib (without rocking control) and end ribs are glued in advance. If everything is in order — build epoxy resin and collect the wing.
Shown in the figures variant all-moving rudder corresponds to a fairly easy engine. With heavy wheel balancing models can be projected at least plywood. However, the best weight steering and its design to pick up the finished bouzouki, depending on the requirements to the alignment and, consequently, to control.
Beam-clothespin-known athletes-fighters scheme. The only thing you need to make is the method of its Assembly. To plywood “mustache” clothespins well docked with a Central rib, it is useful to make a template of the Central section of the wing and only using it to glue parts of the beam in a single unit, with a coil front joint of nylon thread. After removal from the template “mustache” clothespins will meet halfway, but when attaching to the wing they will match the profile of the Central rib. The width of the plywood panels beams are better calibrate — then all spare nodes of feathers will be well and reliably dock with the fixings-plates, glued to the trailing edge of the wing, and only then fixation with one screw is more than reliable.
Ready frame model otchitalsya sandpaper, with the exception of the foam elements. Panoramic glued writing paper or, better yet, Kraft paper, casein glue, or PVA (of course, divorced). After drying, the forehead, the wing is covered Mylar film average thickness, and unprotected wood items carefully varnished with amelita or its analogs.
Test the balancing of the game needs at first to be in the range of 15-20% of the chord quila (that is, within the borders of 35— 45 mm from the leading edge). Specified in the drawings the control cables from the cavity of the wing meet the requirements for training the model and engine of average power. As you gain experience and increase engine power, you can move these seats forward slightly.
V. NIKOLAEV, rukovoditel mug