Marine modelling — the most exciting activity for children of middle and older age. And in Mature and in old age they enthusiastically engaged people interested in the study of the history of the national Navy, merchant marine, history of shipbuilding, and the seekers of sporting victories, loving the Navy and ships.

When working on the creation of models for each of these areas a Modeler must have the skills to work with tools, learn the technology of processing of wood, metals and plastics, to learn how to work with adhesives, paints, resins, etc. in addition, it needs to have a clear idea about ship theory, naval architecture, free to work with theoretical drawing of the hull, to know the history of the Navy, the merchant fleet, the history of shipbuilding.
One of the classes of models that leads to a rapid mastery of basic skills and helps to learn the history, is the class of a silhouette, or contour models. Such polyopia excellent swim under resinosa-Thor. Thus, the model of the aircraft carrier “Kiev” with two resinators is di-_ station 20 meters in 16, which corresponds to a scale speed of 35 knots. A twin-engine model, submarine dive, go under water of 15-18 meters and float in the designated square.
Participating in ship modeling competitions young member in the club with a silhouette model may meet the standards of the 5th and 4th sports categories. It should be noted that repeatedly technique created by the proposed technology, became a “partner” of the Champions and prize-winners of regional competitions modelers-school students.
THE TECHNOLOGY OF CONSTRUCTION
First on the plywood sheet with the carbon paper transfer the contour of the silhouette of the model-polyopia. By marking the parts cut out with a jigsaw (in the case when opening a jigsaw is not enough, with pliers turn the blade to the frame of the jigsaw was held back from the cutting). The resulting silhouette modify a file and needle files so that the corners all edges remained clear, without blockages. The planes and faces of parts cleaned with sandpaper and then painted the upper part of the silhouette in gray, and the lower in green or red. All three main superimposed layers. After thorough drying, the surface is cleaned with fine emery paper soaked in kerosene. Operations of coloring and polishing is repeated to produce a clean, smooth surface. Using the spring silhouette recertified in accordance with the paint scheme of the prototype.
Exactly the same technology and is made of two symmetrical base part (“in plan view”), but as the source material is not plywood, and pine, blowie or lime boards. After processing, staining and polishing these elements in silhouette just below the waterline drilled a number of holes and short screws with glue are screwed right half of the base. The left half is placed on the long through-screws.
Now it’s drive model. On a sheet of galvanized iron space mounting brackets rubber motor and propeller shaft according to the attached drawings. Details cut out with metal shears. After editing on the stove they bend, as shown on the drawings. Brackets probailout on the joints, and holes in the propeller shaft brackets is filled with tin for the formation of sliding bearings (which fills 03,6 mm drill holes and deploy to 04 mm). By means of screws metal parts are fixed on the basis of the model. 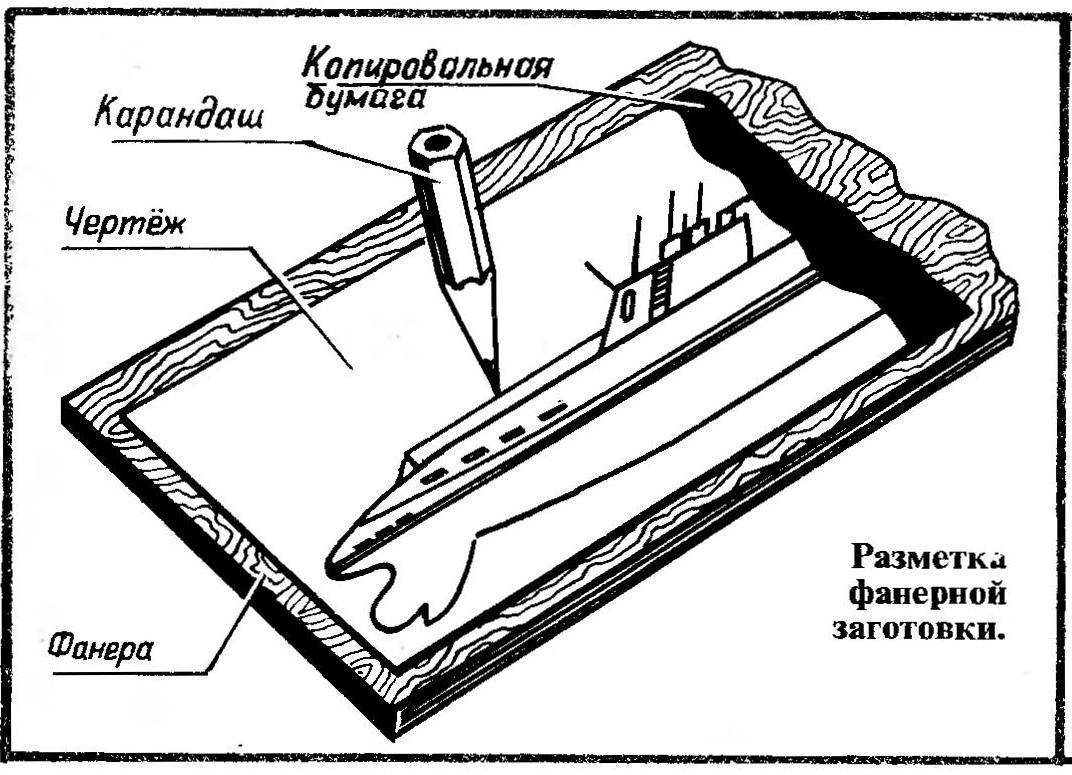 The layout of the plywood workpiece. 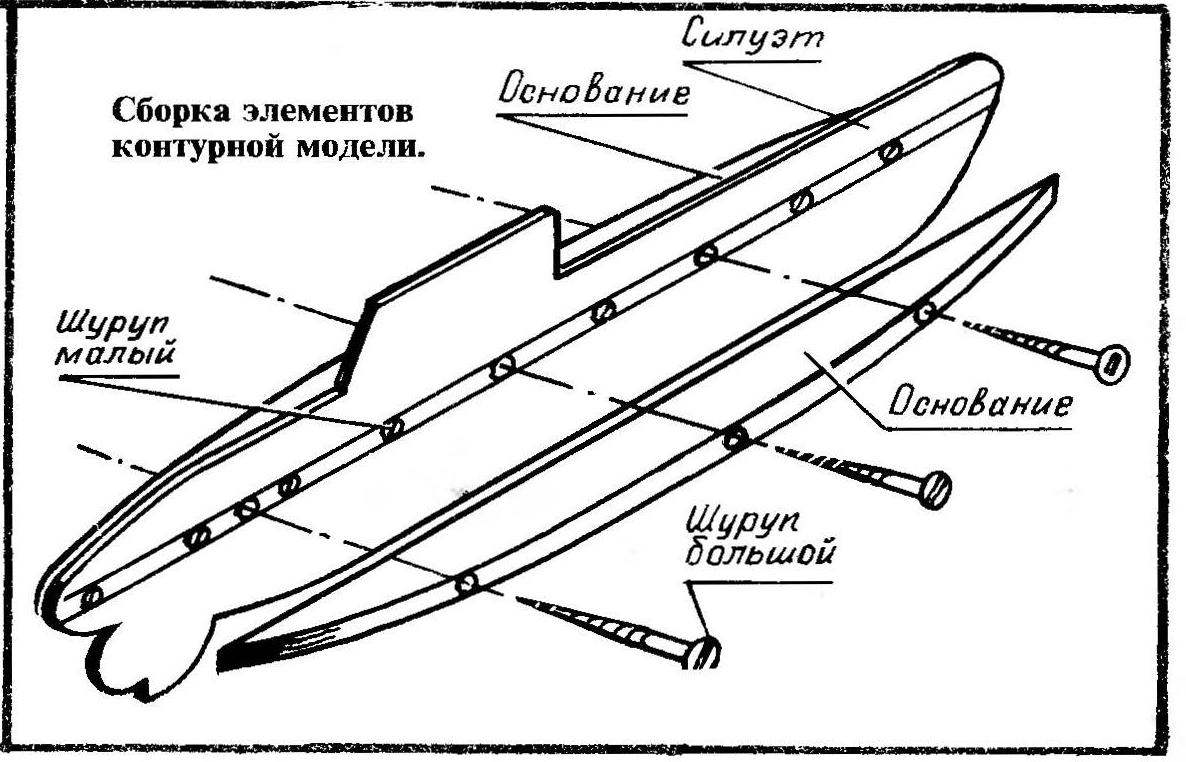 Assembly of the elements of the contour model. 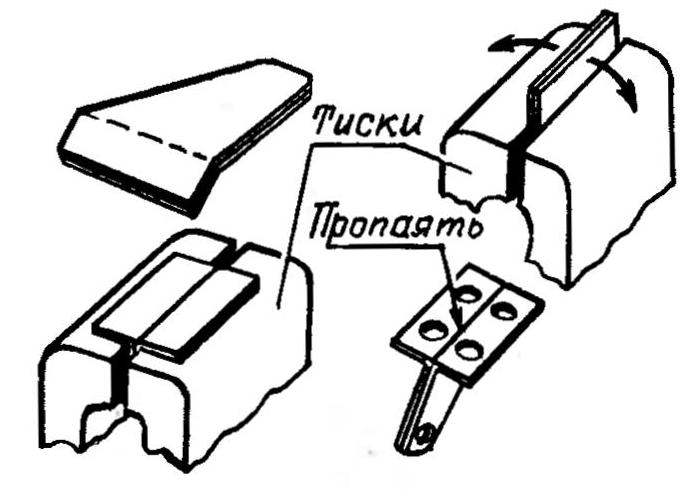 Manufacturing the bracket of the propeller shaft. 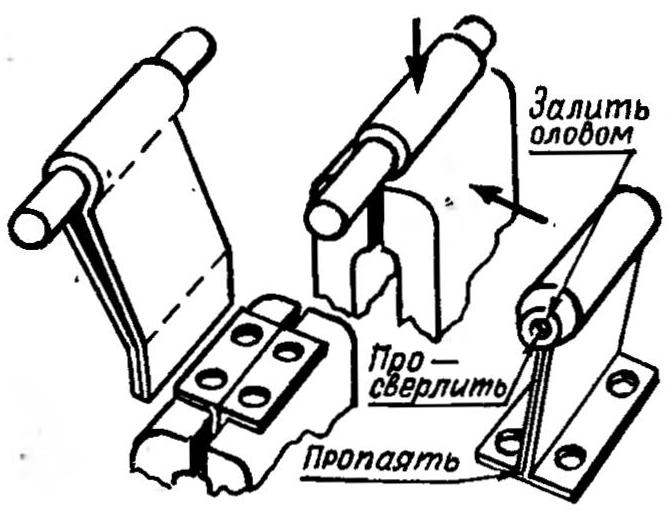 ,
Manufacturing the bracket of the rubber motor. 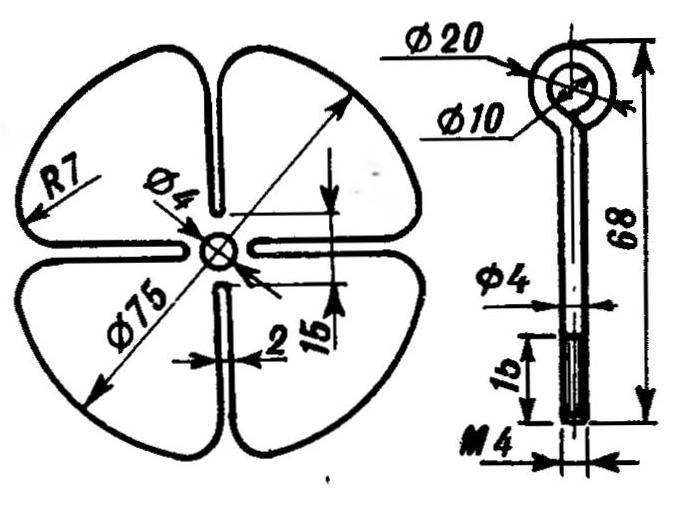 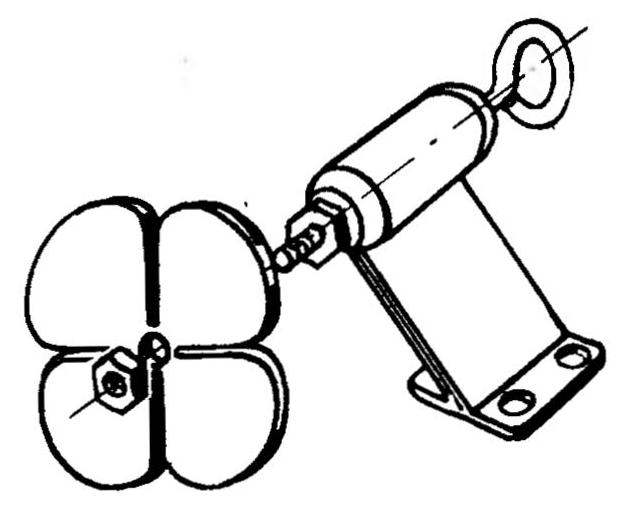 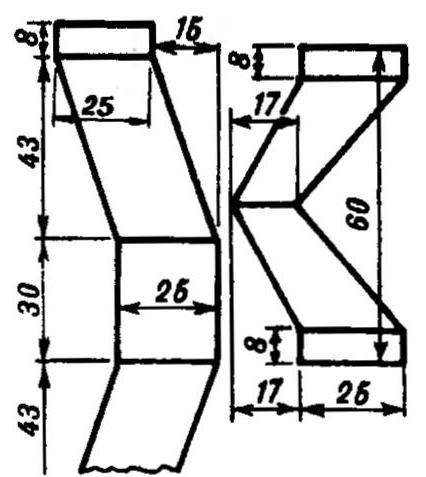 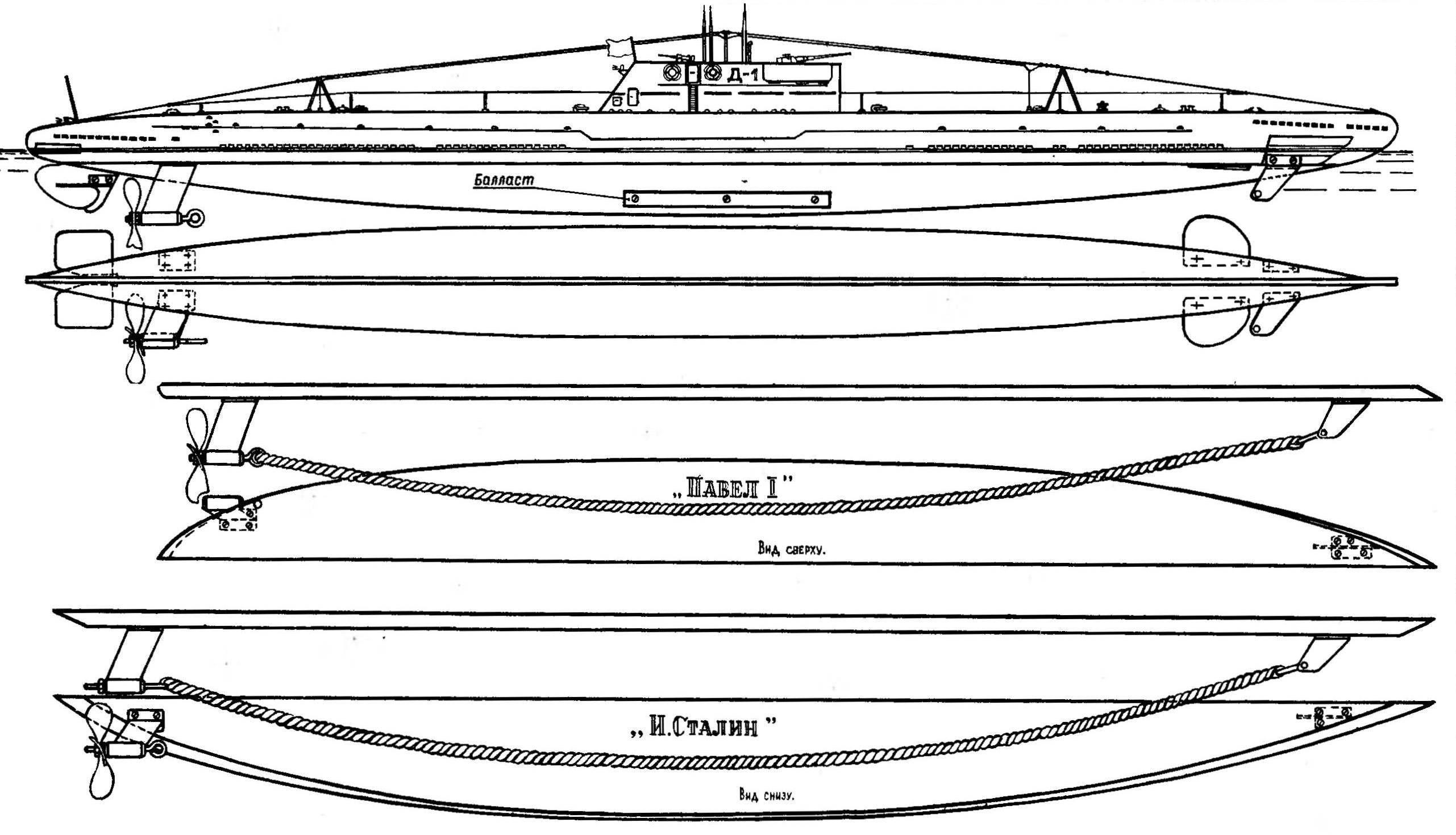 Contour model submarine D-1 (1:5).
The base and nodes running gears models battleship “Paul I” and the icebreaker “I. Stalin” (1:5).

Controls the depth of the model submarine and their mounting on the model:
1 — the rear (aft) horizontal wheel, 2 — front (the bow) horizontal steering wheel, 3 — silhouette of the model.

Scoring distance.
The length of the corridor a distance of 20 m, width 4 m. the Breakdown of the long sides 4 m and the finish line is 0.4 m. the Central gate width of 0.8 m of Bench and sea trials of the models can bring a maximum of 100 points, plus up to 20 points for a scale speed when getting to a finish line width of 4 m. 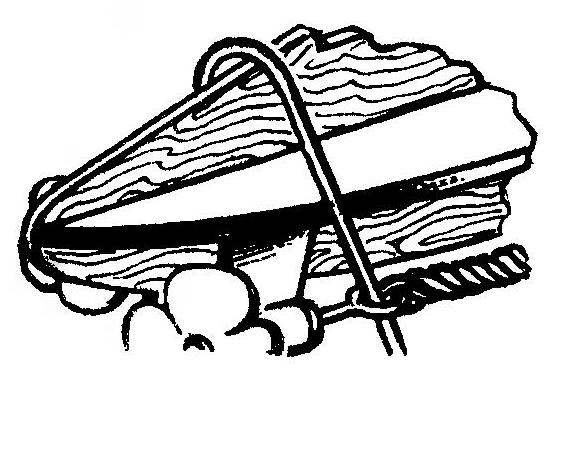 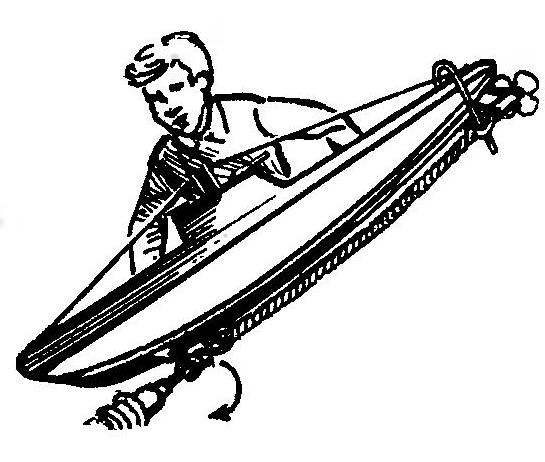 Tightening the rubber motor drill.
On a brass plate about 1 mm thick, is marked workpiece propeller; after you cut and edit detail cleaned with sandpaper. Steel wire 0 4 mm length 95 mm made propeller shafts. On one end of the wire is bent according to the drawing ring, while the other tapped M4. The next stage is the Assembly of shafts, brackets and propellers. After the control accuracy and ease of rotation M4 nuts and propellers spilled on the joints of the molten solder. The blades gently unfold the angle of attack of approximately 15° is formed and additional (bulge facing forward in the direction of the deflection profile 8-10 mm). It is not necessary to forget that on a twin-engine models, the single screw on the right and the other left direction of rotation.
For model submarine is still made of metal plate fore and aft horizontal rudders. Also-only model of the submarine from wood planks or chipboard prepare the form for casting the ballast. Molten lead is poured into the form and after cooling of the metal billet is extracted. Rubber band it hung to the model and tested. The ballast is cut off, so the model was floating on the water, leaving on the surface only. After that, the ballast is secured permanently with screws M4.
DEBUG AND TRAINING RUNS
The assistant takes the model for the forward and aft part of the right half of the base and holds it with two hands. Launching takes bracket rubber motor hook and puts it on the hook of a drill. The stopper of the propeller is put in hooks to propeller shafts, as shown on the drawings. The rubber motor is stretched by about two lengths, followed by a twist. As you tighten the motor winding with a drill approaching the model. After reaching 50 speed drills the hook for the rubber motor is removed from the drill and moved on the bracket model. The second harness starts similarly, but in the opposite direction. The model is placed on water, its “target” in a shot of the finish of the race and dramatically pull out the stopper. If it is a model of a submarine, after the completion of 1-2 meters from the start she needs to sink and float at a distance of 15-18 m. the Correction direction is produced by bending a metal rudder or the propeller shaft brackets.
B. PETRUSHIN, Arkhangelsk