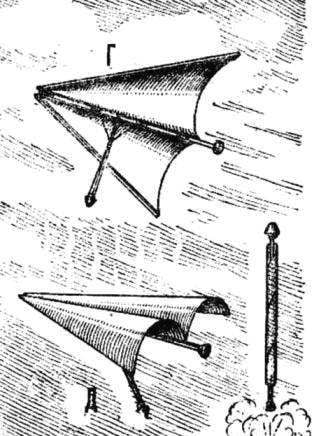 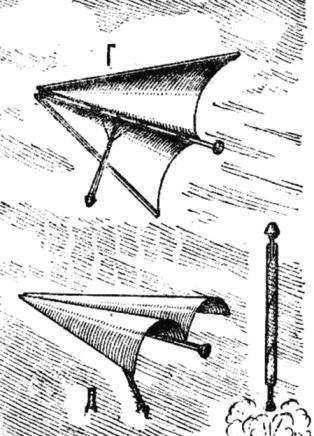 If you flip the binder “M-K” for a few years, then they will have a lot of materials about models of aircraft raketoplana scheme. But… time goes on and the situation changes. Three or four years ago, the leadership firmly seized the athletes who construct a model with a wing “rogallo”. Now the adherents of the rigid wing are almost gone – in the international competition of the Czechoslovak “rocketeers” make raketoplana aircraft scheme.
Benefit from the use of Delta-wing apparent in the subtle body of the rocket to hide the glider a large area, and as long as the technical requirements for models of this class there are no restrictions on the specific load on the wing, miniature hang-gliders will win the competition “hard” raketoplana.
Today we offer athletes the drawings and description of the most successful models of raketoplana with Delta-wing, which brought its creators of a victory in all-Union and international competitions.
This model, built by the champion of Europe A. Marinov from Bulgaria, the most typical among raketoplana wing of the “rogallo”. Anticipating the story about its design, mention should be made of the complex technical requirements for such aircraft: the maximum impulse of the motor (or the maximum total impulse of engines, if the model is installed) to 5.0 n • S., a launch weight of no more than 90 g, the maximum time recorded in the main rounds — 3 min.
Externally, the model A. Marinov resembles a hang glider. The Central beam is a wooden rail with variable section (the largest is 4X6 mm). 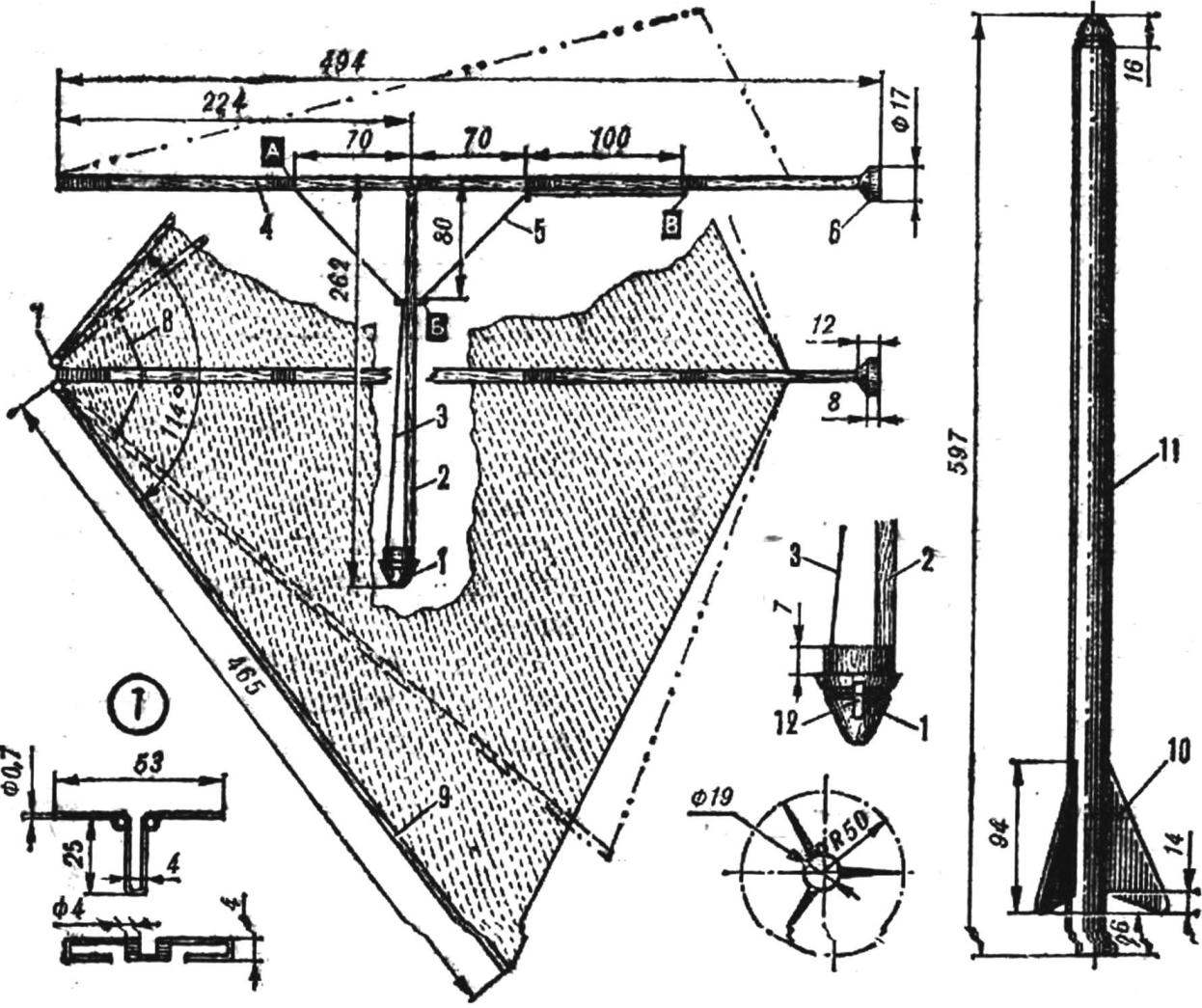 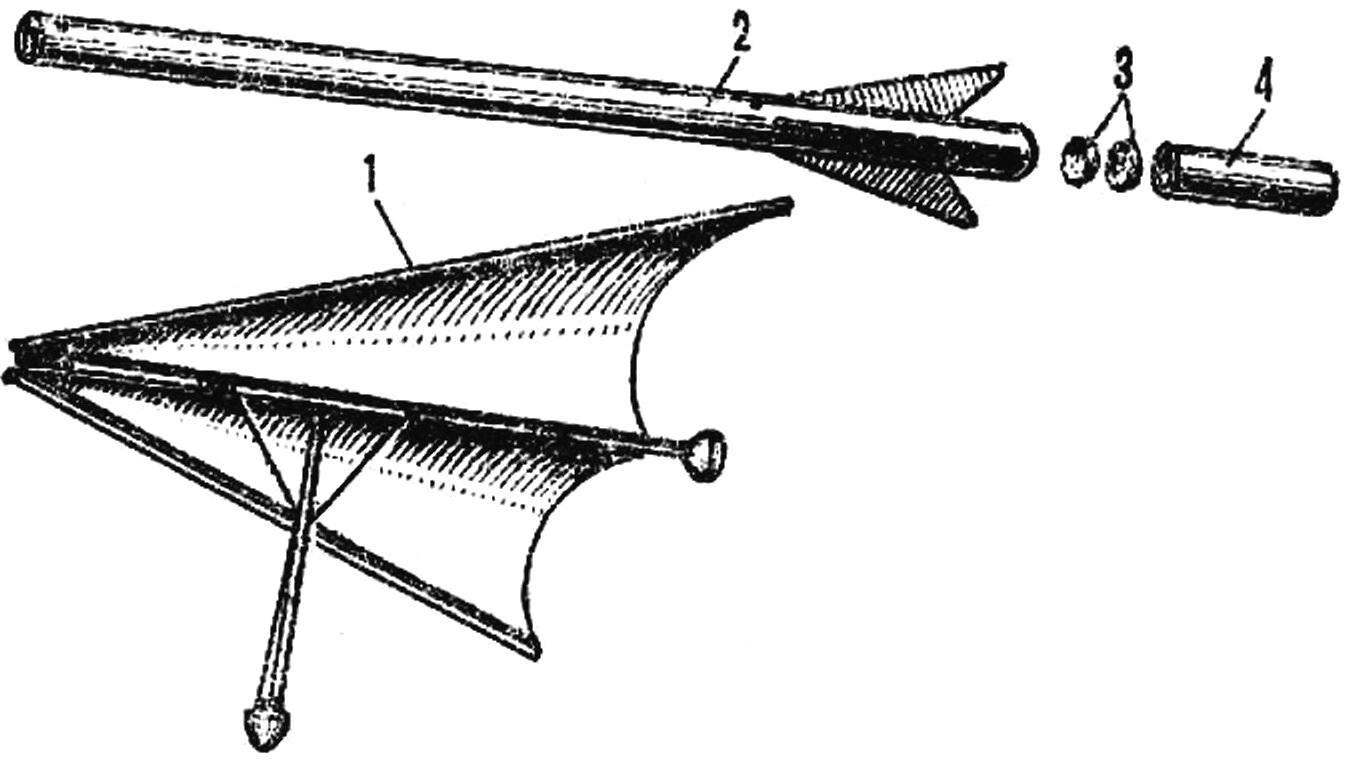 Fig. 2. Components of the rocket:
1 — glider and a Delta wing, 2 container (carrier), 3 — wads of cotton wool and talc, 4 — rocket engine.
In front of it with thread and glue fixed notched spring steel wire Ø 0,7 mm. Side rails (wooden slats with a cross section of 3X4 mm) similarly connected with the free ends of the spring. On the rear of the Central beam is fixed wad of lime, and in the middle on the hinge — rod-spring balancer with a length of 236 mm. At its free end, is the head fairing of the rocket.
In the starting position of the rack and the balancer is held by the thread, one end of which is fastened on the fuselage (at point A in figure 1) and the other on the head fairing. In the planning mode rail-balancer is deflected downwards rubber band fixed at points B and C.
Sail the Delta wing of the Mylar film with a thickness of 0.01 mm, glued to the Central and side beams. Curb weight of the glider — 15 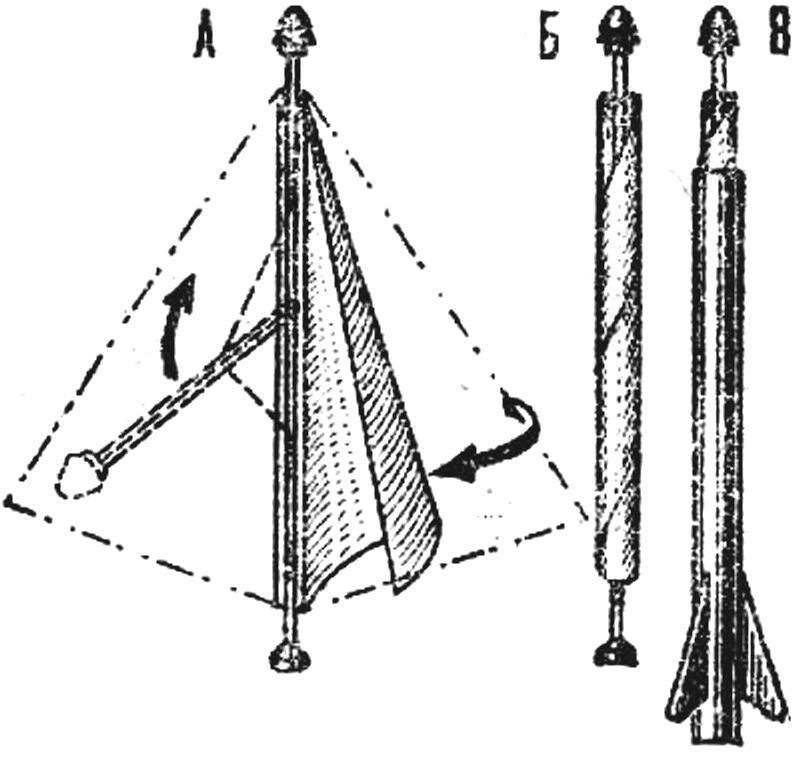 Fig. 3. Laying in a container of glider:
A — side member are pressed against the Central rod-a rocker with a nose fairing turns around the hinge and also is pressed against the Central beam; B — the sail of the Mylar film is wrapped around the frame of the glider; a folded glider is inserted into the container.
The carrier itself (or if you prefer, container) glued two layers of drawing paper. Stabilizers are profiled, they are cut from the balsa plate thickness of 2 mm. the weight of the container 15, the Starting mass of the entire model is about 50 g.
Before you send the model rocket glider and a Delta wing in the first flight, it must be regulated. The first thing to do is to ensure that the model’s center of gravity coincided with the axis of the hinge rod of the balancer. For this we need to download either the fairing or tail wad. Now, a few times run the model with it, and in the first flights send her smoothly. If your glider is stable plans, fold the model and put it up. Adjusted correctly, the glider should turn in necessary for flight the position of the rail-saw down. Debugging is almost finished, the rest of the operation on the adjustment carried out during training runs with the engine.
Some tips on adjusting.
Typical trouble during the separation of the glider container is the delay of the first dive. Most often this happens because of the increased speed of the mini-glider from the container. To reduce it, add a few wads. If the glider continues to fall into a dive, the reason for the wrong alignment is shifted forward of the center of gravity. To move it, push back the hinged rack and the rocker, extending a thread-lock. The same effect can be achieved by downloading the tail wad. Another reason for the delay in dive — small directional stability. Increase it with increasing angle of the “V”, bending up the ends of the spring hinge or increase sail, to do this, however, will have to replace it with a new one, with a large angle at the vertex.
Another defect of the flight — pitch — planning at excessively high angles of attack, when the glider loses speed and goes into the parachuting mode. To eliminate this phenomenon, you can shorten the threads of the retainer, and hence the movement of the rod of the balancer forward, or relief tail wad.

Fig. 4. The main stages of flight of the rocket plane class Ѕ4В with deltakilo:
A — start, In — flight, In — the separation of the glider container, G — flight planning, D — pitch up the glider after deployment wick machine forced landing.
Pay attention to the preparation of the rocket for launch. Modelers typically use two methods of his gear. Some put mini-hang glider in the container, and then the pre-staging area is fixed in this engine. Most fix engine first, then ka it is placed wads of cotton wool with the obligatory suction them with talc. After that, the container is inserted and the glider, which side bars are pressed against the Central, and the rake for the balancer on a hinge is deflected forward. Sail gently crushes and twists around the folded frame and the glider is embedded in the media.
Model rocket A. Marinov has a simple automatic forced landing, enabling the transition of the glider mode kupirovaniya. The concept of this device. On the head fairing along the annular grooves placed a thread with a wick that holds the string-retainer. Is the wick to burn through a thread in the annular channel, as the rail-saw backwards and the model begins to cabriolet.
V. ROZHKOV, master of sports of the USSR