First of all, let me ask you a question: can a student-constructor of ship models do with their hands, without the help of a group leader, to create a good copy of a military ship? Most likely the answer will be negative.
But boys, naglyadelsya in an amazing, complex models of their elders, the athletes, of course, want to immediately take up the construction of the same. And despite all the recommendations of the heads of circles guys, with little or no experience, to work. And, be sure to choose the most difficult ship!
About the consequences of such initiatives, however. What is more important. By all the laws of boyish psychology after having abandoned such a difficult copy (in the vast majority of cases, the kid soon understands the futility started doing, especially after one or two nodes that are out of his hands “not very good”), to undertake simple models is extremely difficult. After the loss of a kind of “prestige” for the boys — feeling very painful. And here it turns out that after he told everyone what “cool” model he’ll build, he has to sit down for a simple training…
However, such provisions are there. To dissuade the beginner from undertaking the model of a military ship often unthinkable. I don’t need to do! Easier to pick up a ship is a prototype, the production of which is really for young copyist, even with a significant scale up.
It is a pity that the choice of simple copies is extremely limited. Torpedo boats? But they are the apparent external simplicity, are the plethora of hard-copied elements. Suffice it to recall the same torpedo or mechanisms of setting anchors!
But there is more than a simple prototype. It is a famous PolyglossumII boats of the Dnieper flotilla, who became famous during the hostilities last days of the second world war. With the help of these landing microshadow our troops had solved many problems for the transfer of equipment and people at the river spree and close to Berlin. Suffice it to recall just a few figures: on polyglossia and the pontoons towed by them a few days transported 16 thousand men, 600 guns and mortars, 27 tanks, hundreds of carts with ammunition and other goods! (Detailed steps of procaterol described in one of the editions of “Sea collection” — “M-K” No. 4, 1987. In the same room you can find two color projection gunboat PG-117 required as documentation on the color-models). 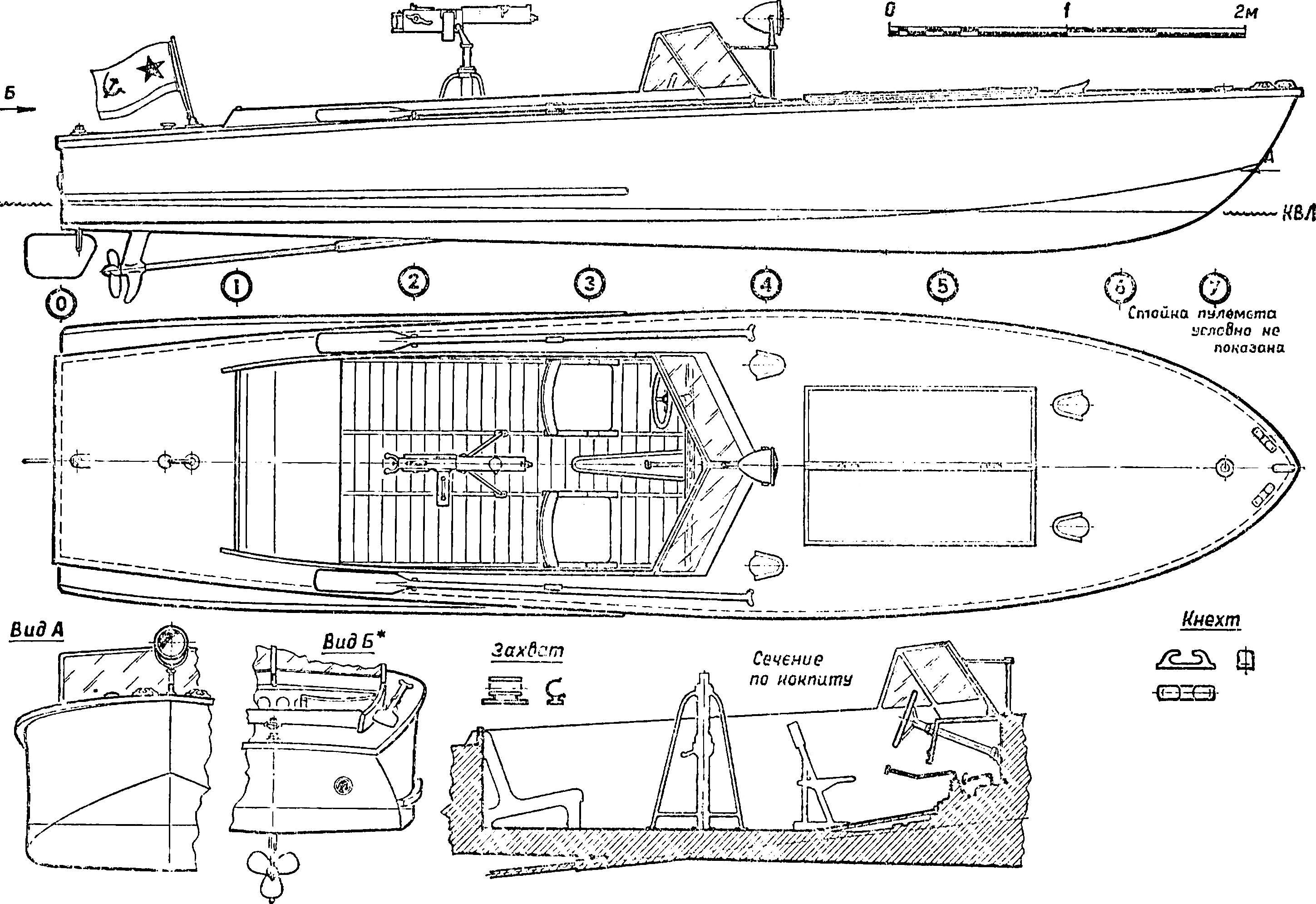 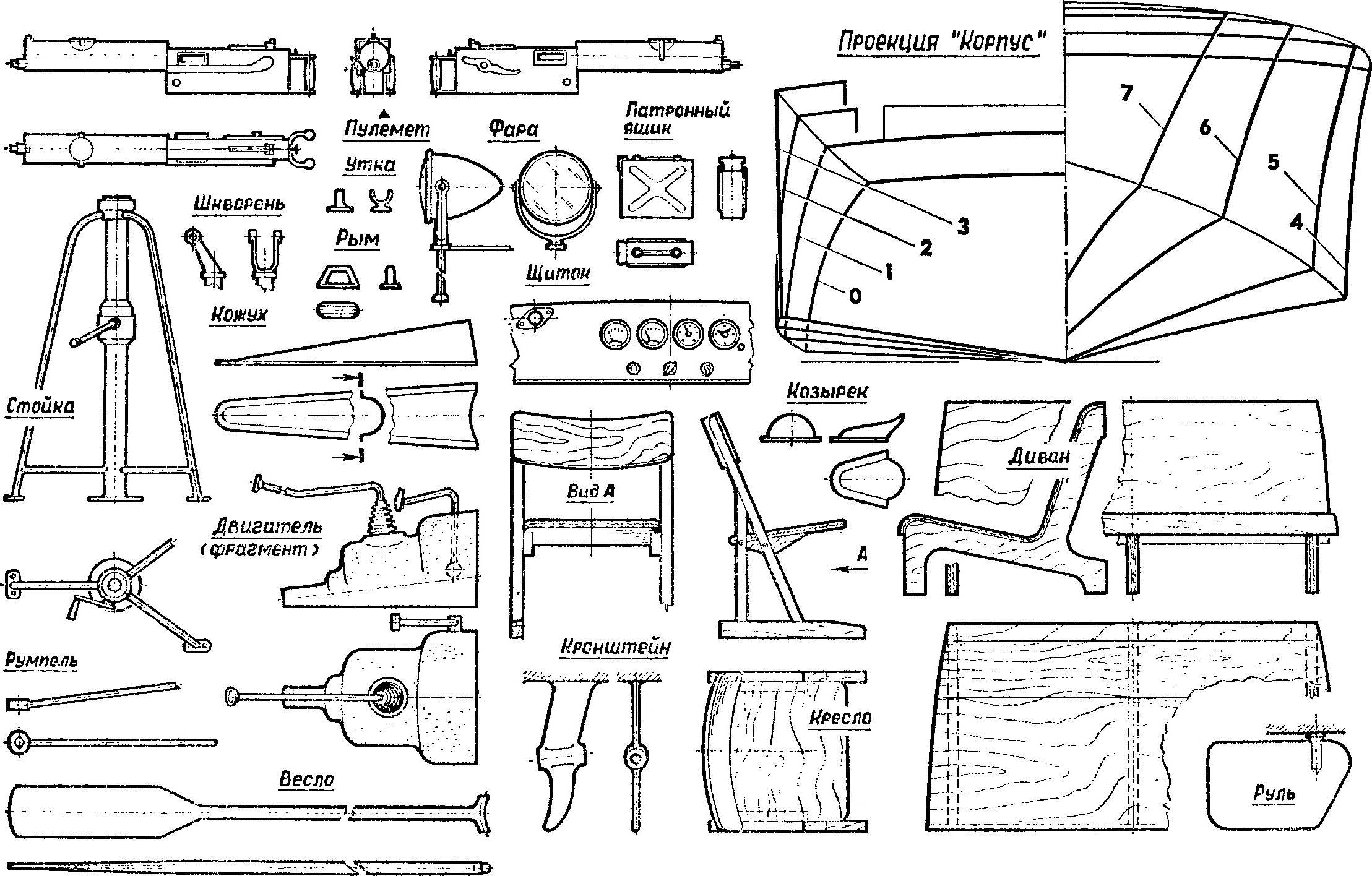 Detailing boats and the projection of “housing” is made in the scale of 2 : 1 is relatively common.
So, in search prototype, we stop at military polyglossia created based on the popular at the time, a pleasure tourist boat NKL-27.
First of all, you need to choose the scale. From the list recommended by the rules of competitions in ship modeling sport of the USSR selectable 1:10 or 1:15. The latter will allow to build a model of the most common among athletes-students of the class of EK-500. In this embodiment, micrometer should have a length of 480 mm, a displacement of 1450 kg : 153 = 0.43 kg and a scale speed of 50 m : 20 = 2.5 m/s. to stay within these boundaries is not difficult. As the power plant uses a set of “engine-deadwood-screw”, commercially produced by the domestic industry for modelers. Current source — 4-5 battery No. 343 (R14). 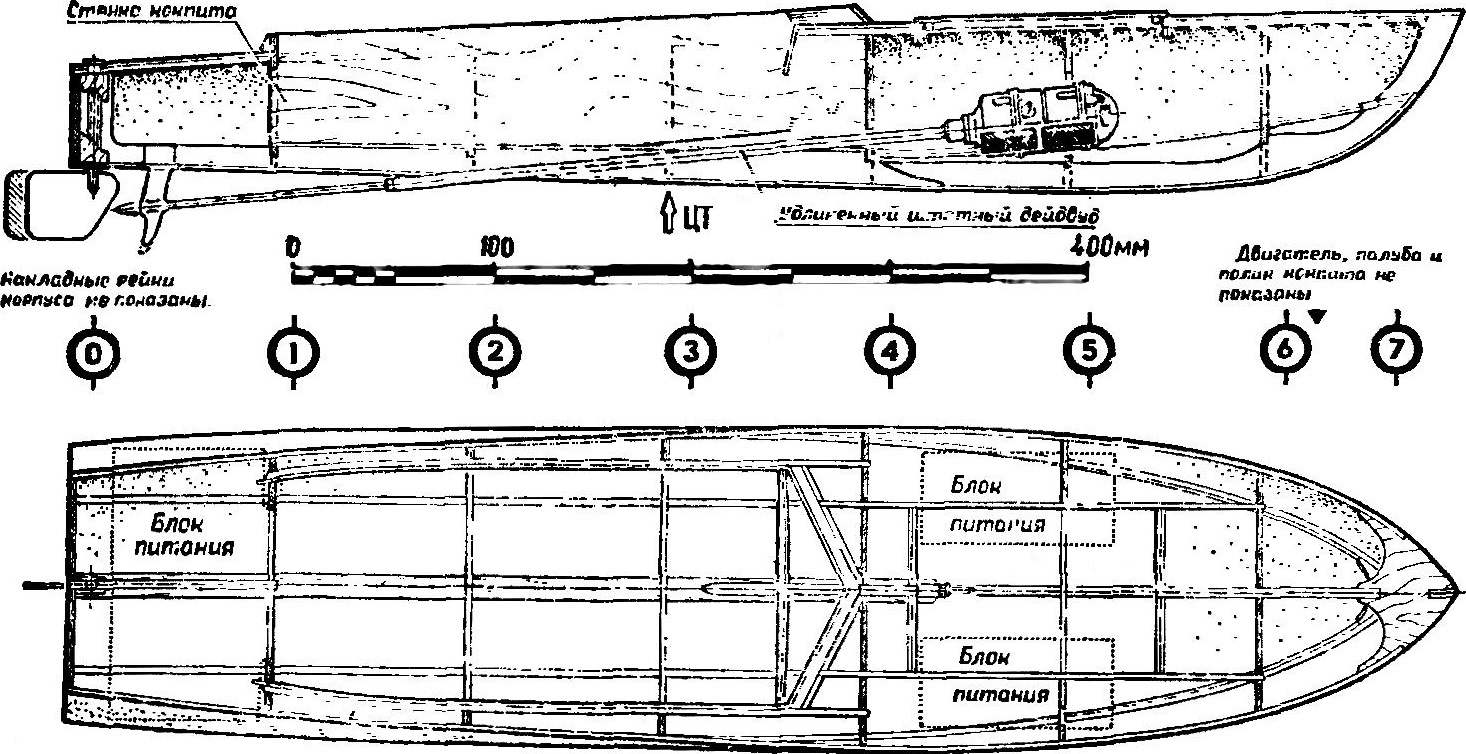 Model class EC (1 : 10).
For obtaining a drawing model life-size to increase it to six times relative to journal publication. To build models in scale 1 : 15 from watery drawings to increase four times. Access to the rear power block through a removable couch — to-front power supply- through a hatch in the deck. Shown by hatching an unacceptable increase in the area of steering that distort the measurement of the length of the model. 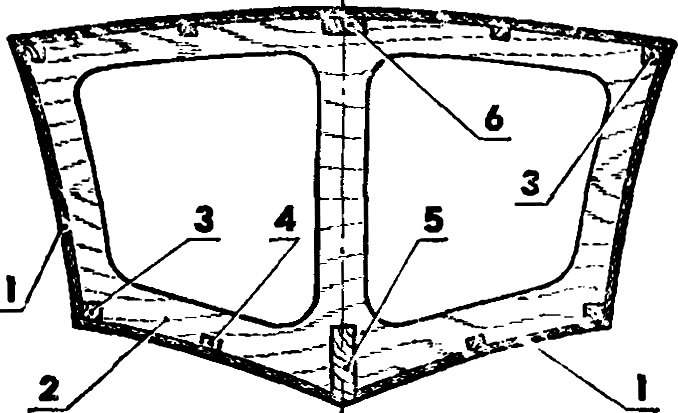 Design of typical frame:
1 — the hull skin (around the perimeter of the bogus Reiki 2X5 mm, consistently driven toward each other and mounted on the assembled frame on epoxy adhesive), 2 — frame (plywood with a thickness of 1.5 mm), 3 — power stringers (Linden cross section of 4X4 mm, after Assembly of the frame to malcovati), 4 — supporting stringer (lip section 3X3 mm), 5 — keel (plywood 2 mm, starting from SHP. No. 4 and then — the fake rake 10X12 mm — after linking of the propulsion system and deadwood to facilitate), 6 — Midel’veys (Linden 3X6 mm). 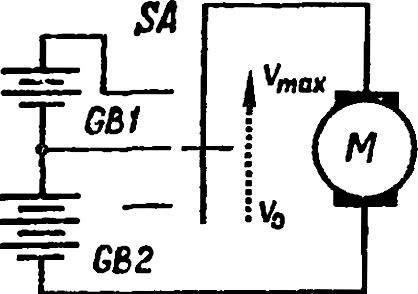 Scheme of a two-position engine speed control for power less than 50 watts.